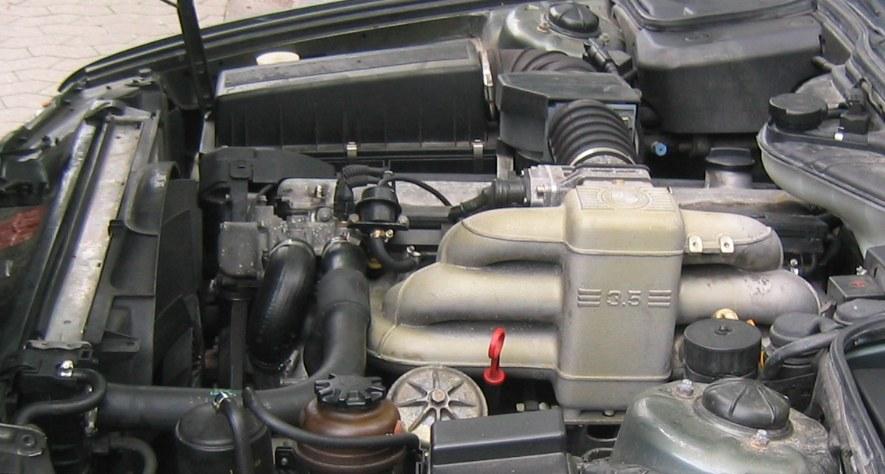 The stock engine in the e28 is the M30B34 which has an 8:1 compression ratio and makes 182hp @ 5400 rpm and 208 ft-lb @ 4000 rpm. The b35 obviously makes more power and has a smoother torque curve. The b35 has a more aggressive cam (264 deg duration) than the b34 (260 deg duration) and slightly more lift as well as having 1mm larger intake valves. The intake manifold also has larger runners with a different port shape at the head giving better line of sight at the back of the intake valve. The combustion chamber size was also increased to 65cc, up from 58cc on the b34. Since the b35 has a higher compression ratio, the pistons are different from the b34 creating better combustion characteristics.

One of the biggest differences though was the introduction of Motronic 1.3 DME (Digital Motor Electronics) which allowed much better control of the engine. If the b35 swap is to be considered, the wiring conversion should be considered mandatory. I have personally run a b35 off of b34 Motronic 1.0 DME and the results were less than impressive.

The electronics will make your e28 run so much smoother in all aspects of operation. Also, gains from chipping the DME are much greater than what is seen from a b34 DME. Additionally, fuel economy should improve as well.

I want to do the swap, what parts do I need?

Obviously, you need an M30B35 engine out of one of the cars listed above. However, it should be noted that certain b35 blocks have different motor mount bosses making some engines not a direct bolt in, requiring a right side motor mount adapter. All e24 blocks will work and are a direct drop in. It is reported that early e32 blocks have the correct mounting bosses for the e28 engine mount. Late e32 and all e34 blocks will require an adapter. Here are some pictures that OriginalMJG provided of his late b35 block. You can clearly see the different bosses. You can see that two of the e28 bosses are missing. 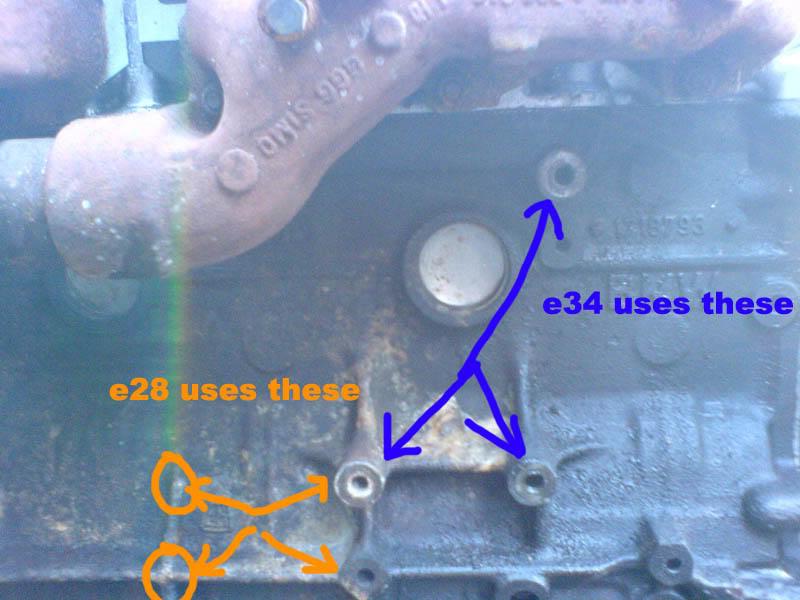 And a shot of the left hand side of the engine. 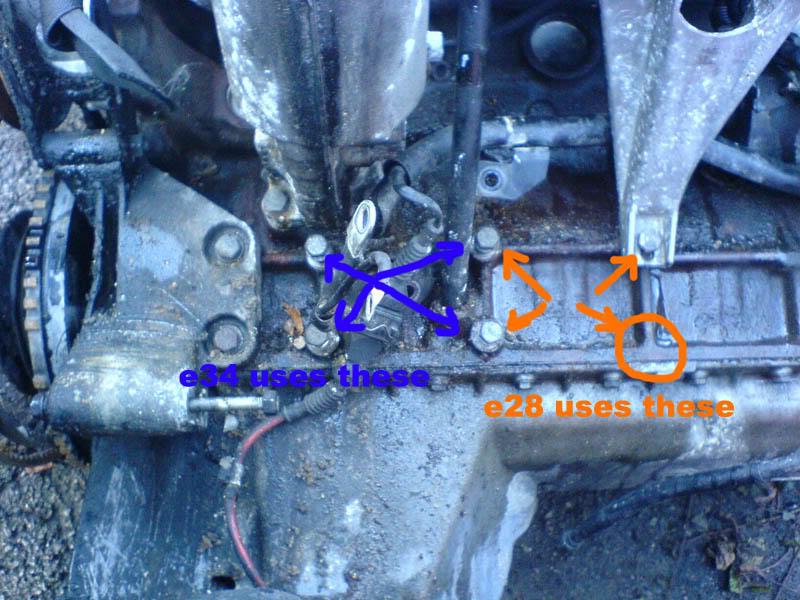 Koala Motorsport sells an adapter that allows the e28 mount to bolt on.

The e28 exhaust manifolds are also different. The collector flange is different as is the ID of the collector. You can bolt the e28 b34 manifolds to your b35 and it will bolt up to your stock exhaust, but you may sacrifice a small amount of performance due to their slightly more restrictive nature. The difference can be seen below. The e28 b34 manifold is shown on the left and the b35 on the right. 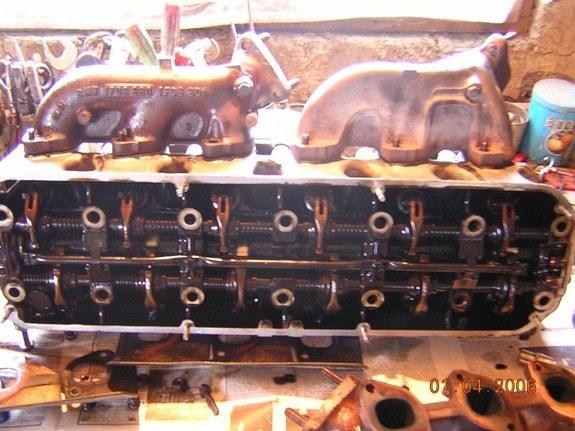 Port size can be see here. 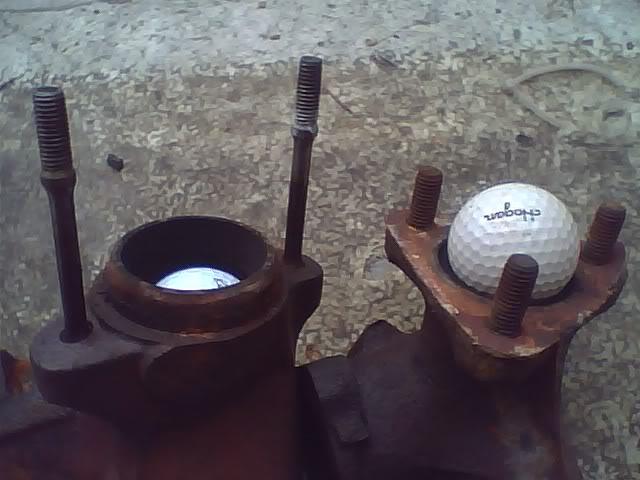 The final consideration is wiring. This will be covered in the following section.

There are several ways of tackling the wiring of your new b35. One method is to use the 1988 528e “super eta” harness. The super eta utilized Motronic 1.1 which is closely related to 1.3. It has the same 55 pin DME connector and will plug into the e28 fuse box with no splicing. I have not performed the super eta harness swap and am relaying information gathered from mye28.com on what needs to be done to make it work. There are a few circuits that need to have their wires lengthened as they are now in the wrong place to work with the m30b35. Matt (Bimmerguy2002) has reported that he needed to lengthen the oil pressure switch wiring about 1 ft. Also, the AFM, TPS IACV and O2 sensor wires need to be lengthened about 2 feet. It would be best to confirm the exact amount that needs to be lengthened once your harness is laid in place.

The second method involves using an e34 harness. I prefer the e34 harness as no wires need to be lengthened and the harness has the more aesthetically pleasing wiring loom cover over the fuel injectors. The downside to this harness is that it will not plug directly into the e28 fuse box (C101) and does not have the correct connection under the dash for the tach and fuel rate input (C103). I have compiled a wiring guide based on Rob Anderson’s original work. There are also a few other points that should be noted when using this harness. Make sure the harness is NOT from a car with EML (BMW speak for traction control). The EML car will have an electronic throttle. Another point of note is that DME pins 40 and 41 need to be tied in with the compressor “on” signal from the AC switch. Also, the b35 will have a two pin gauge coolant temp sender plug. The pins on the plug at the sender need to be de-pinned and switched. This will allow the gauge in the cluster to work properly.

Shown below is the correct wiring configuration for the C101 plug as well as a graphical pinout of C101. 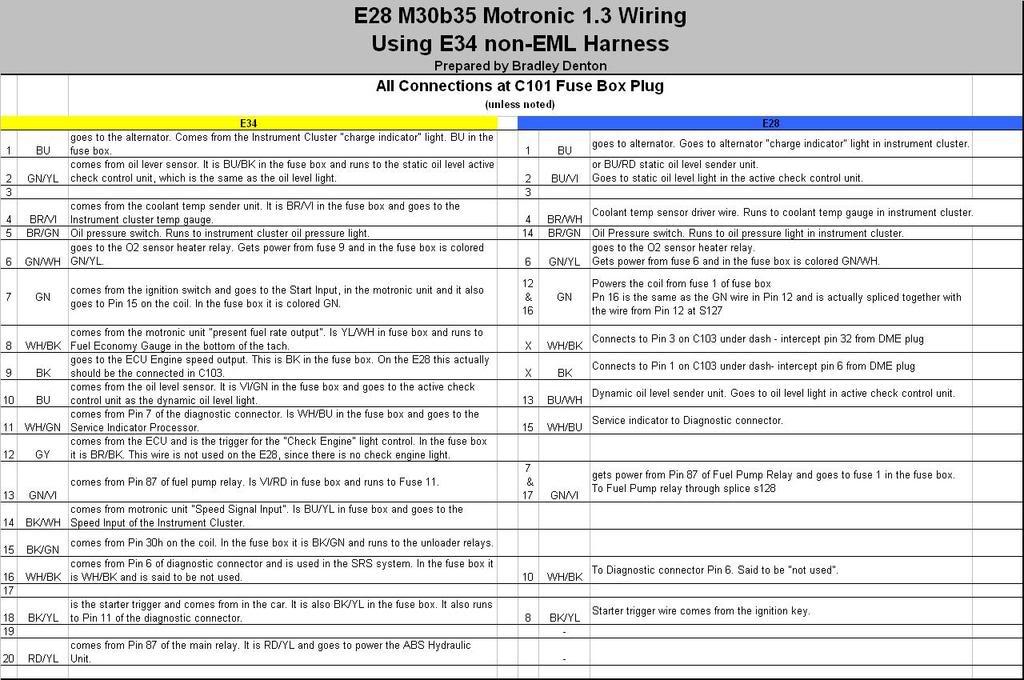 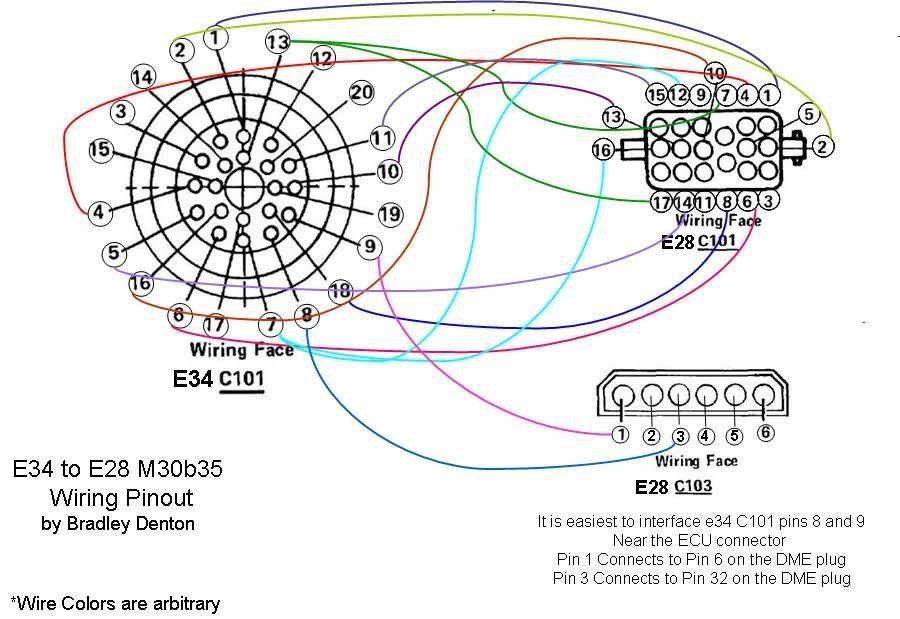 As always, all of my FAQs are intended to help the e28 community and I strive to have my information be correct. If anyone finds any errors or has suggestions or comments please feel free to contact me.