When I picked up my E34 there were exactly 2 strands of the ASC cable left. Well after a motor swap, and having the intake manifold on and off 12 times chasing gremlins, those two strands broke leaving me with the Triangle service ASC light. I priced out the cable/actuator at my local BMW dealership, and it ended up being like 175 bucks and they said they couldn't get just the cable. My indy parts dealer says the cable is supposed to be a dealer item only. Well after getting tired of looking at the light here is what I did and it fixed it for $2.11 yeah, two dollars and eleven cents.

Knowing BMW's I can't be the only one with this problem so I figured I'd do a little tutorial on how to replace this little trinket on the skinny so here we go. Step one, go to your local bike shop and pick up just the spline for a brake cable on a ANY bike. it only has to have the perpendicular cylinder style end.

Step one mark your exposure before you remove/unscrew anything, the pic is just an example, it should be 3.25 to 3.5 inches. When measuring, be sure to lay the tape where the cable goes and not outside like I did and get the wrong measurement.

After you've measured that you can remove the actuator and broken cable. Flip it upside down and taking a small flat edge screwdriver lift up the 6 or 8 little tabs that hold the cap down. Shown below, you need to lift the small tabs to take the lid off. 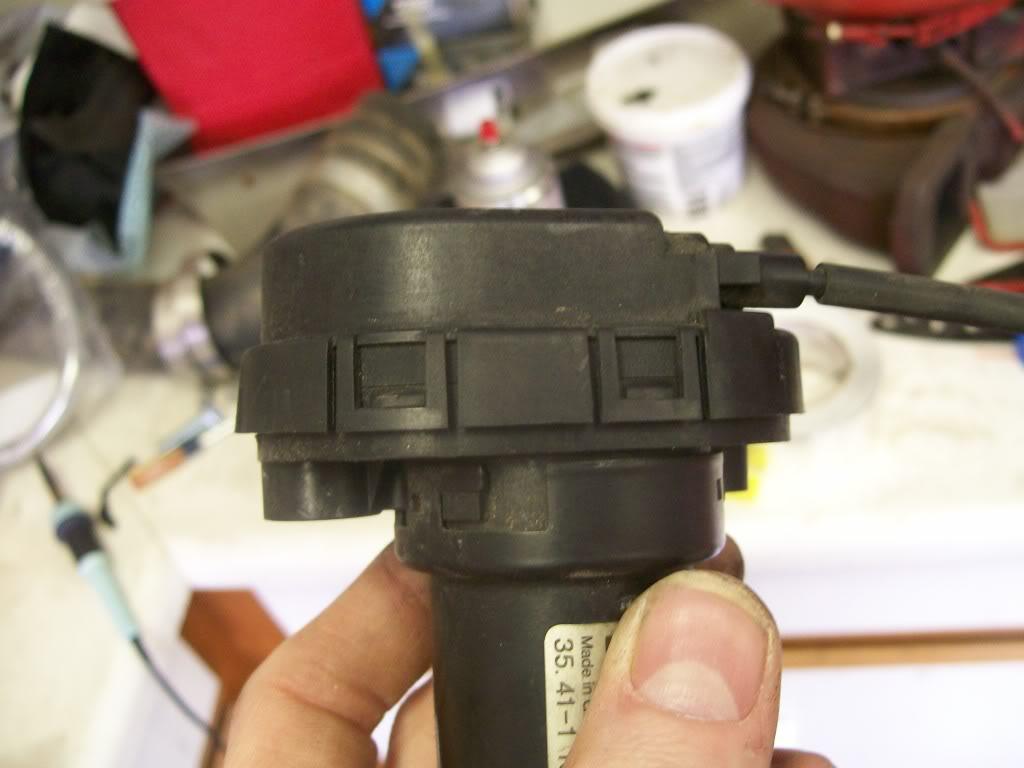 Once the lid is off you can see the old frayed cable. Pull out the remains and remove the lid with the sheath of the cable and its ends intact. Disconnect the cable from the lid and pull the two ends off the cable. When you do this you may or may not pull the liner, but your end goal is to remove that center liner (the cable you picked up is larger than the crappy factory baby one so you need to pull the liner). 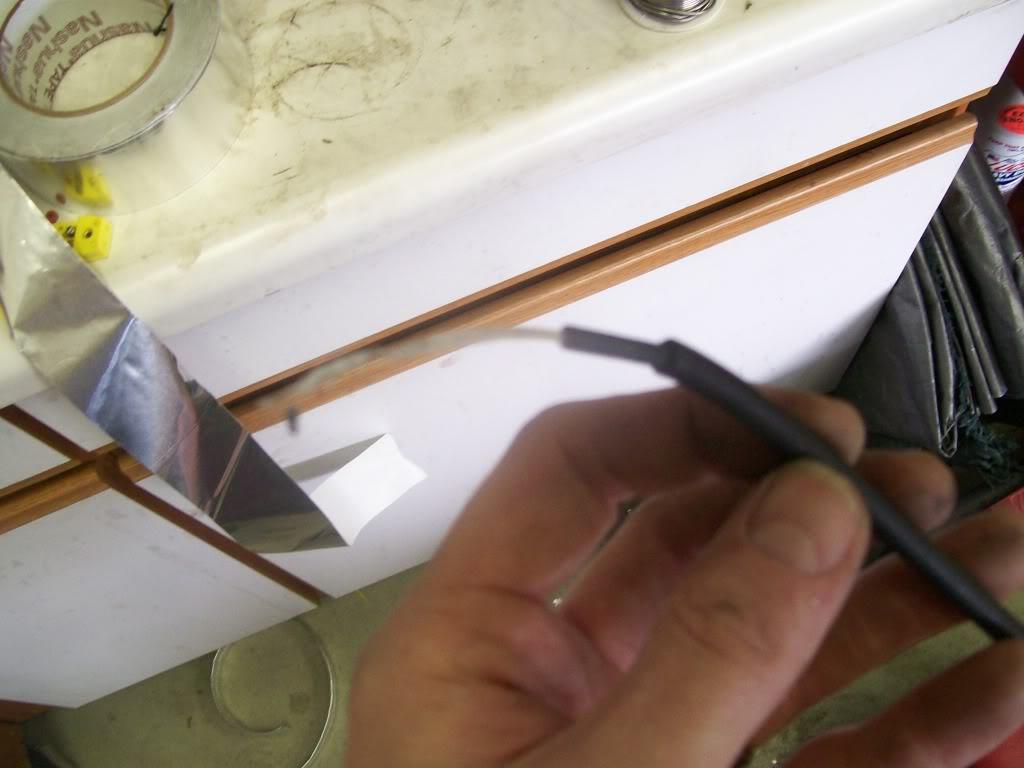 After removing the splines you need to enlarge the ends of the old cable accordingly 5/64" drill bit does the trick. 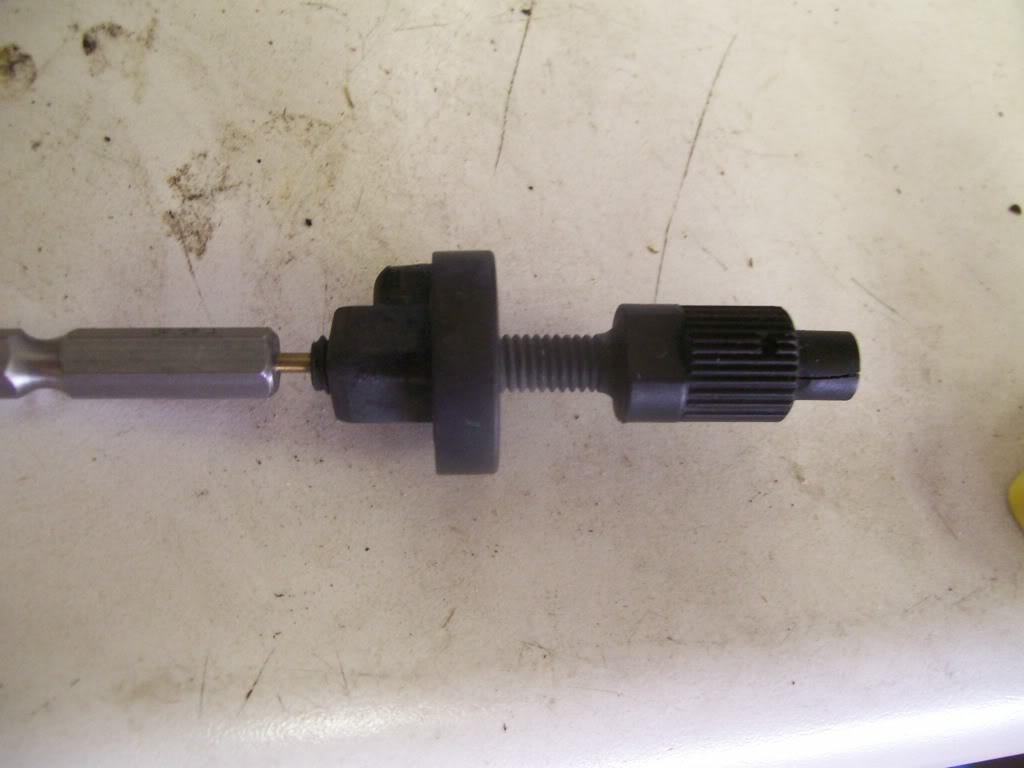 Turn your attention next to the old bustified cable. Grab the brass barrel with a pair of vice grips and with another smaller pair, kinda bend them so the two radii of the jaws slowly pull the old cable out of the end. 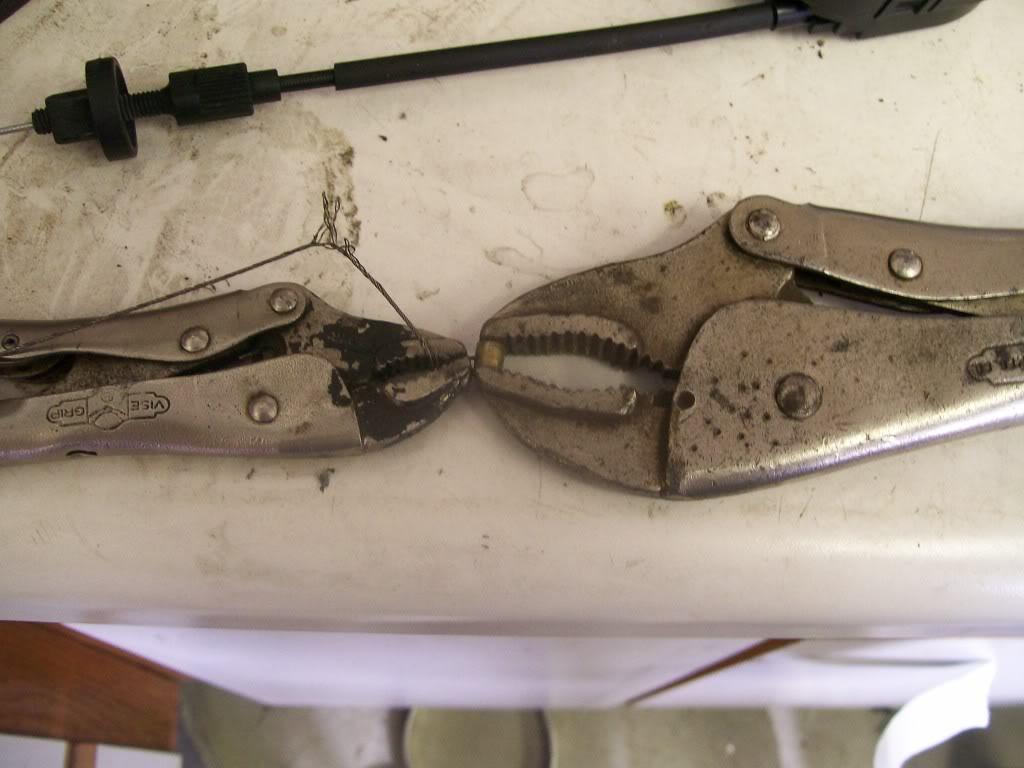 ) Once you do that kinda line the actuator up with the lid/cable assembly and mark where the brass end needs to be. 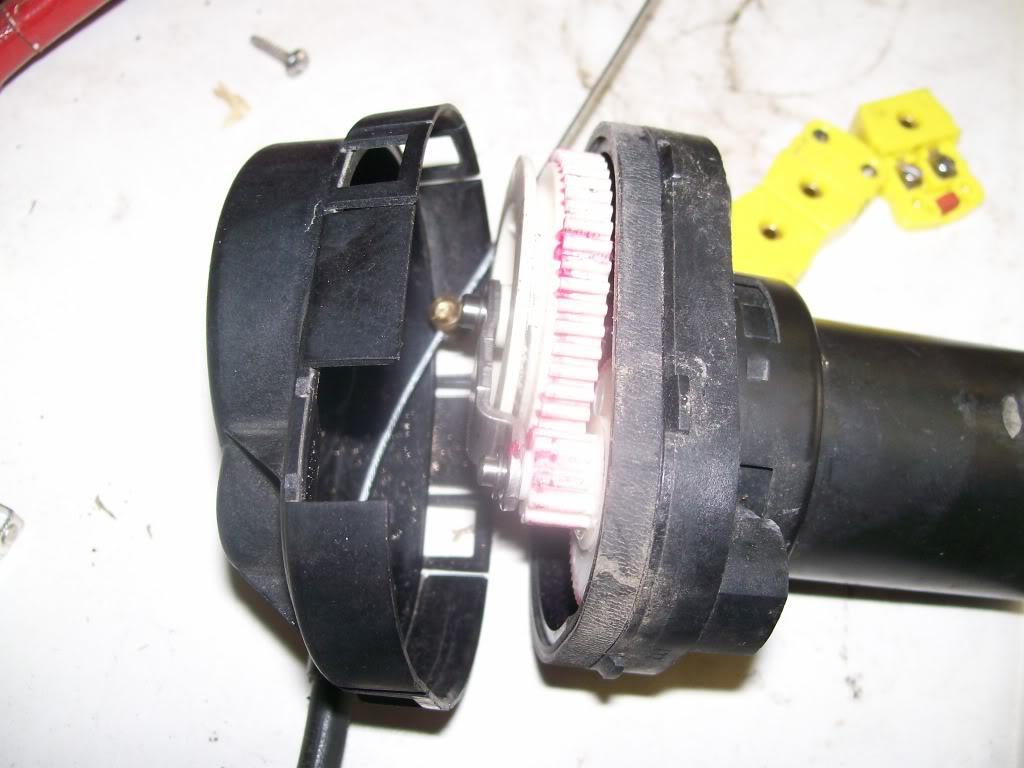 After you've marked your spot on the cable where the end needs to be, orient the two ends so they are the same direction. Once you have the barrel lined up between your marks and the ends oriented properly take a small punch and pean the opposite side in that was done from the factory. Once you've done that take a cutting wheel and cut it off flush with the brass end. Should look something like this (my first cut sucked @$$ so do better than this picture 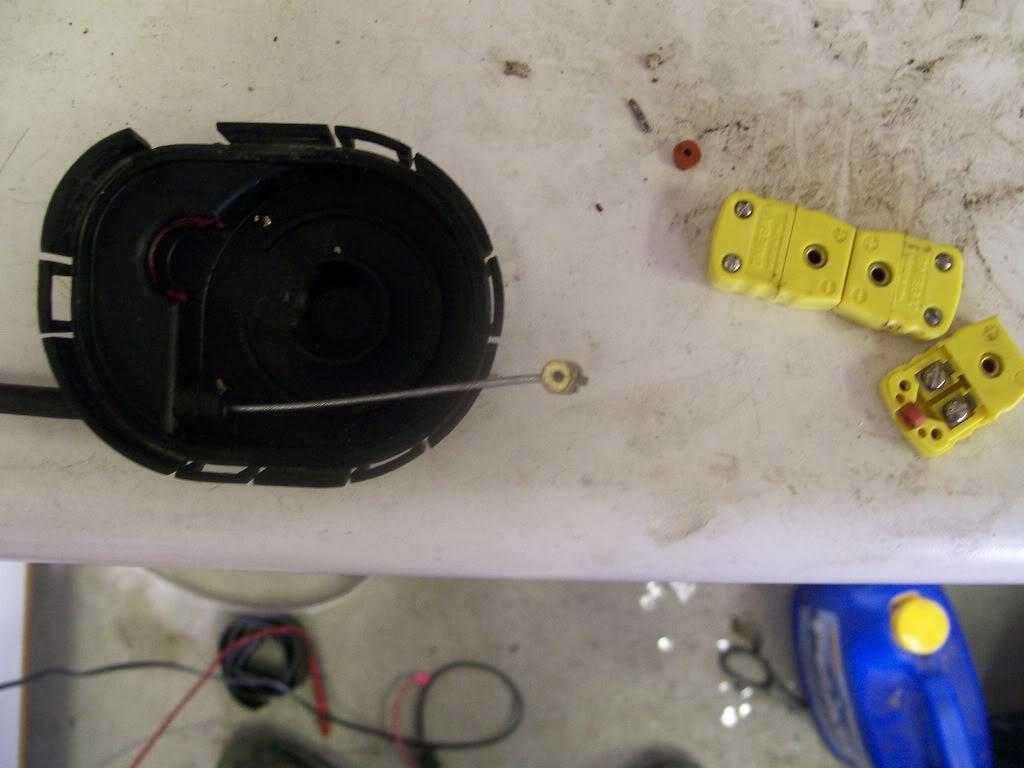 After peaning and cutting you can thread it back into the driver gear, and reassemble the lid onto the actuator. At this point all you have to do is drill out the end of the throttle blade end. I used a 1/4" bit and wobbled it out some to get it in. The bicycle brake cable end is a standard size so you'll have good luck doing the same thing. Drill out as below. 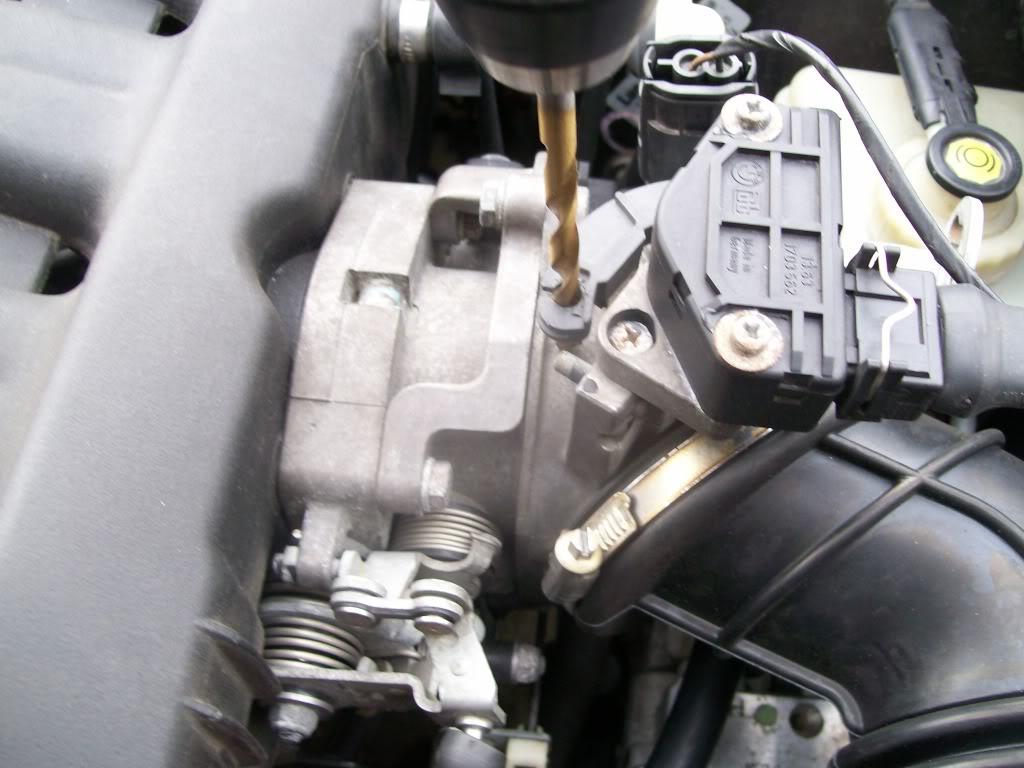 Once it is drilled out you can thread the cable into the arm and bolt the actuator back in and marvel at your work you stud, you just stuck it to the man and saved yourself serious coin. Take the slack out of the spline with the little adjuster and your job is done here. 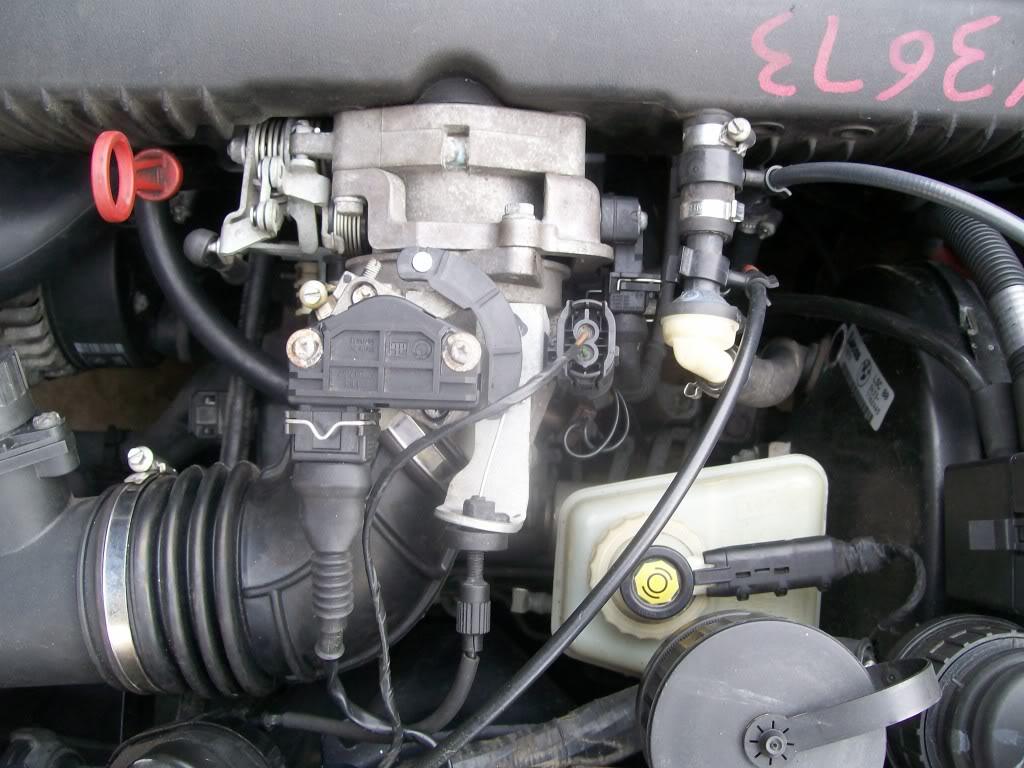 See here light off in the dash. Champion. 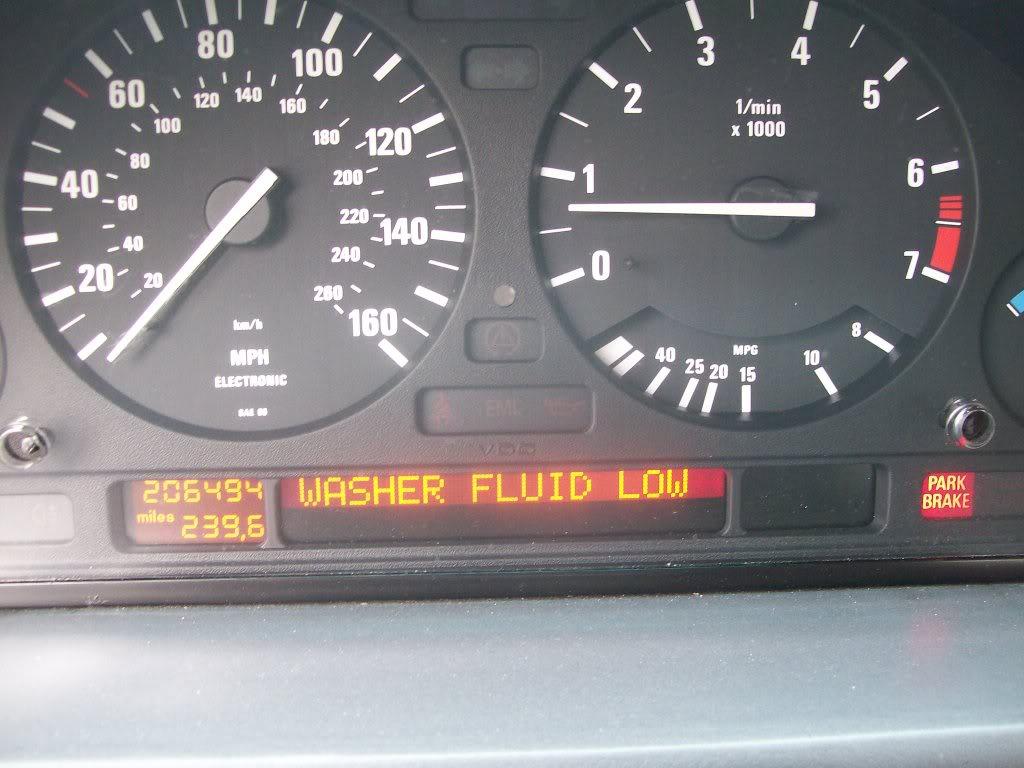