I know this might **** off a lot of other car enthusiasts , but heck thats a huge part of the appeal of such a conversion !

Ill be putting an ls1 based engine in a 996 porsche ( 1999 to 2007 body style), this wont be a race car kind of conversion , but a proper daily driver with most amenities and systems working .

The plan is to have a dependable daily driver that I can take out on long cross country trips without worrying about breakdowns, initially planning on matching the original hp output, but instead of 420 to the crank , I plan on getting 420 to the wheels .

It will have air, heat , all power stuff , a proper stereo system with navigation , good gas mileage, and a comfortable ride and all the instrument cluster working . basically have it where if a person drives it they would never know it was a hybrid ( until you stomp on the loud pedal).

Ill be documenting every step of the process as best I can throughout the build process in this thread. This wont be one of my good enough engineering kind of builds where a week later the car is somehow blasting down the highway, instead it will be a long term project where I take my time and do it real right

This build will comprise of several steps , first of is getting the car into my garage and making it into a roller .

Next is getting the engine/ trans in and getting all the essentials working so that the car can drive under its own power.

Then comes the long task of fixing all the little odds and ends to get the final product.

After the car is done and running, i plan on getting a new shortblock in along with a set of turbos ( gotta use the intercoolers and ducts for something ) , but thats thinking waaaay ahead .

Any how , on with the build ; originally I was looking for a regular rear wheel drive 911- 996 for the project, but as luck has it I found a turbo awd one without the engine and trans. After doing some research, I found out that retaining the AWD is not a problem so I decided to go with this car:

The car had an engine compartment fire before, and now is missing a bunch of stuff from the driver rear side rear. I need to get control arms, knuckle, caliper and rotor. but first is getting the thing cleaned up to assess what I need to do. I already have the longblock sitting in the garage ready to be installed. But that will have to wait until I fab up some engine mounts and other stuff.

- Clean rest of the car

- Start mocking up the engine in the compartment

here are pics of her first moments in the garage 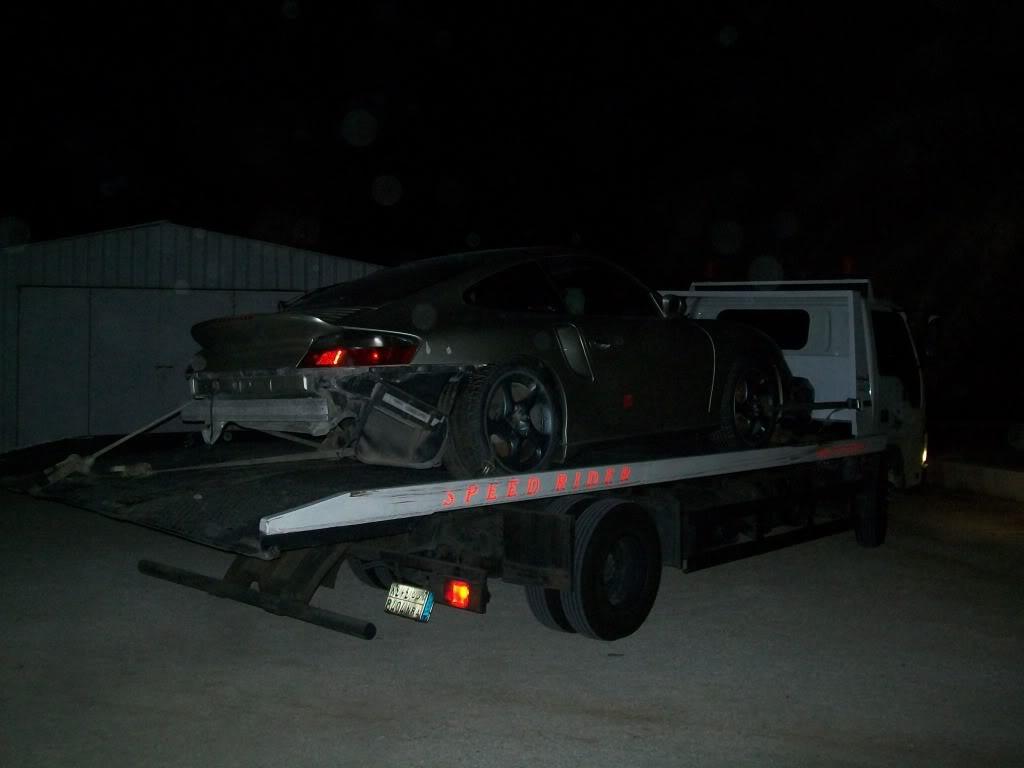 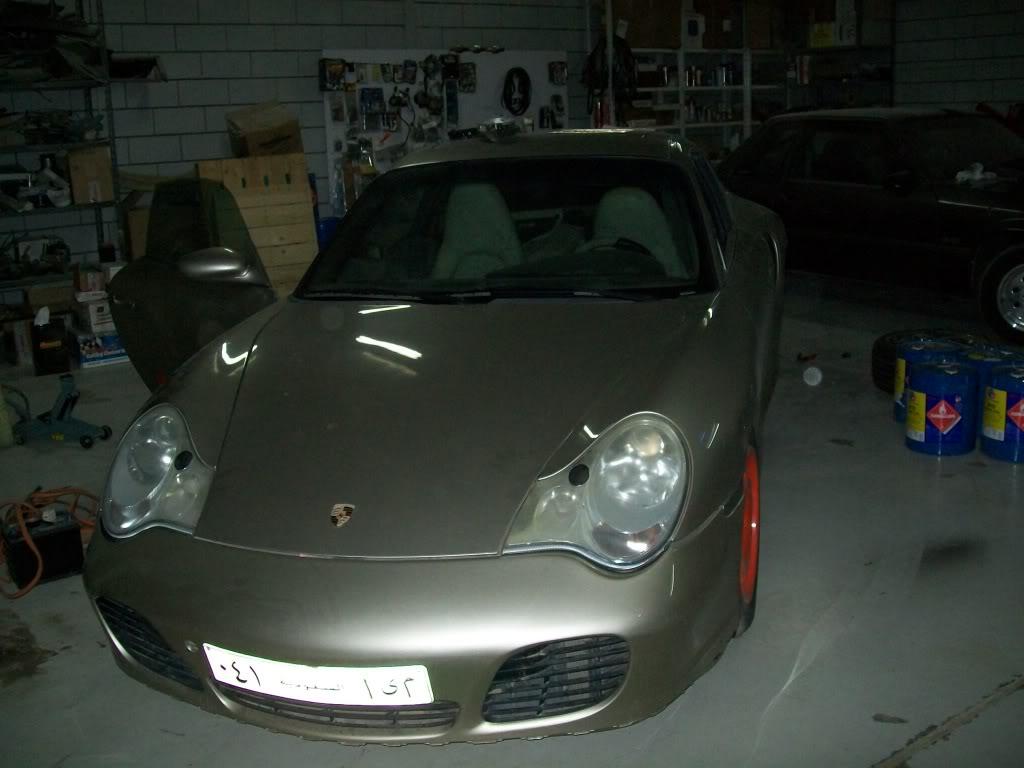 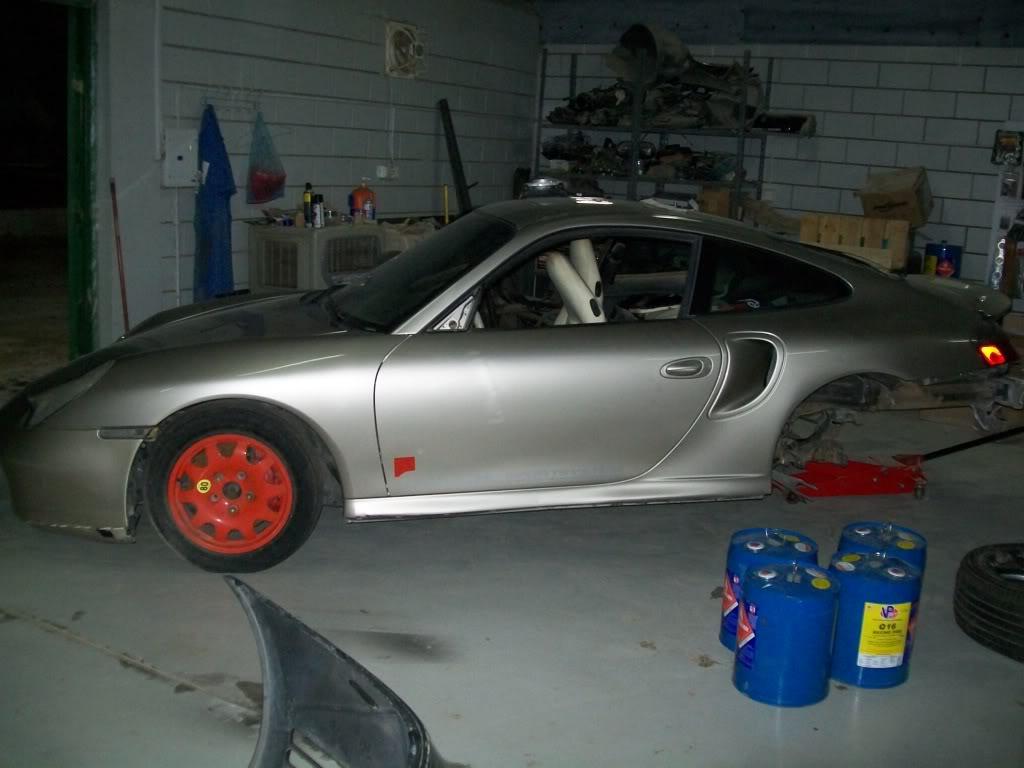 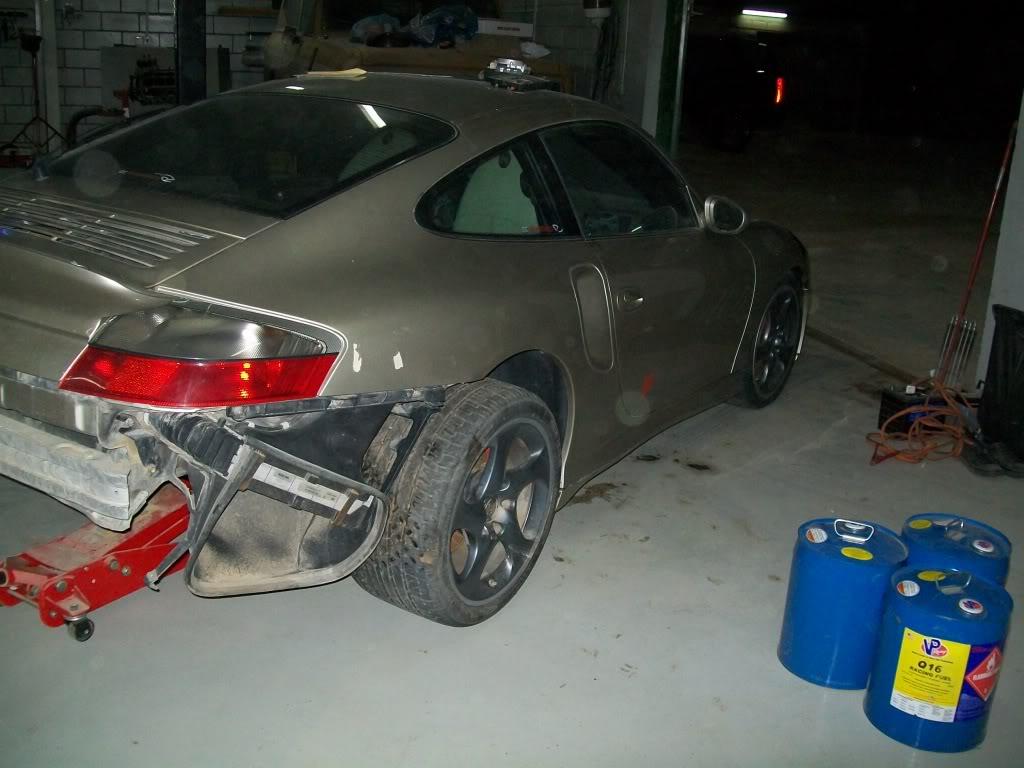 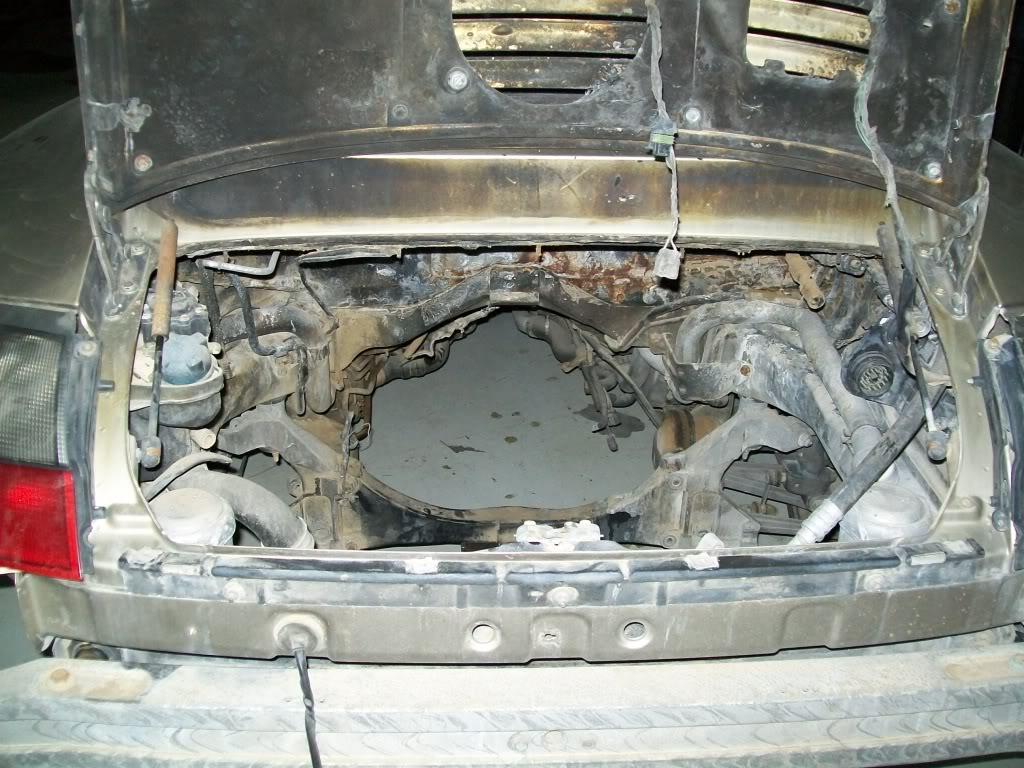 and given how excited i am about this project , i immediatly threw in the mockup engine 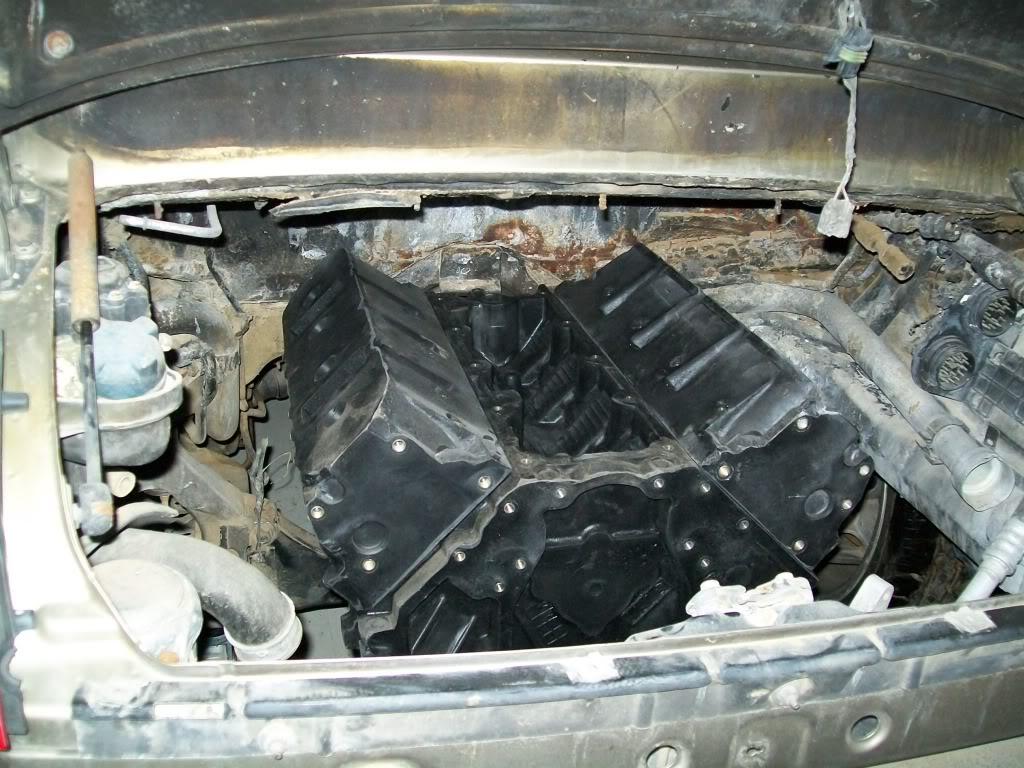 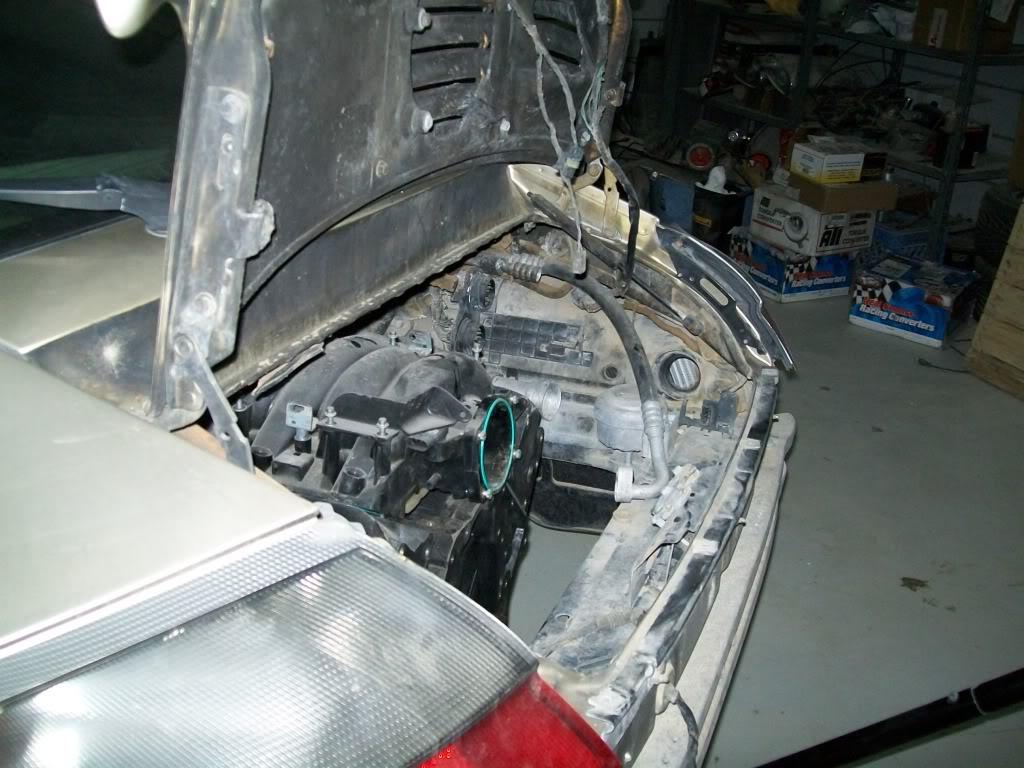 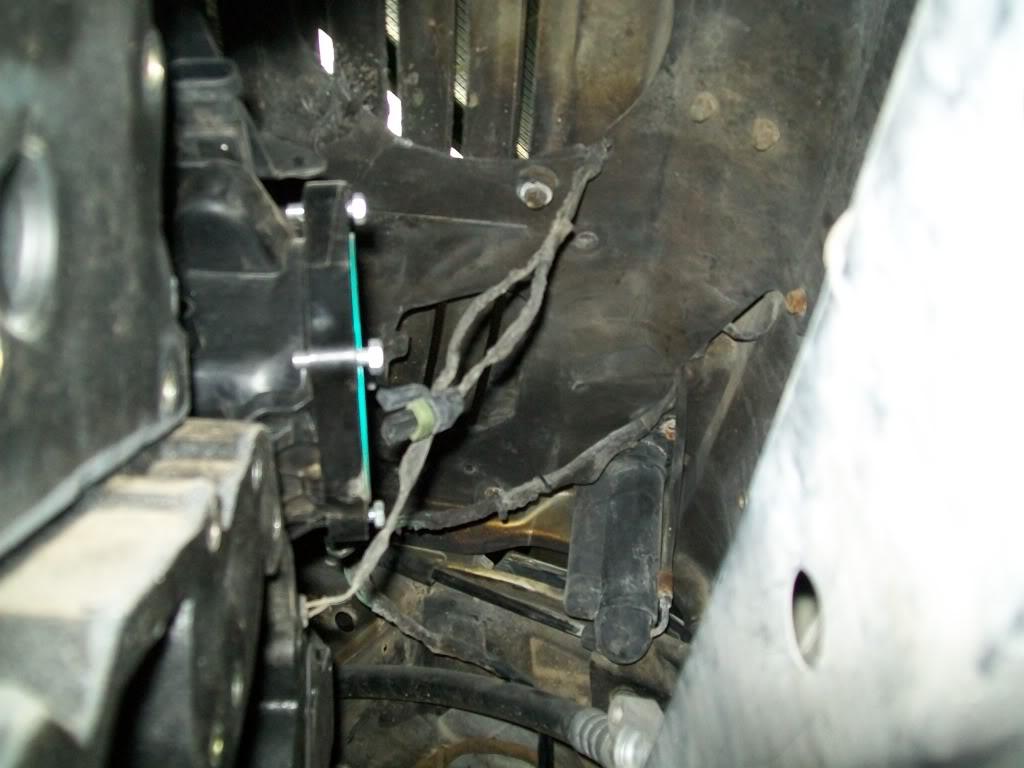 interior shots ( you can see the evidence of the engine fire inside the car) , and please forgive the dust and mess, the car has been sitting in the open with the window down for 2 years : 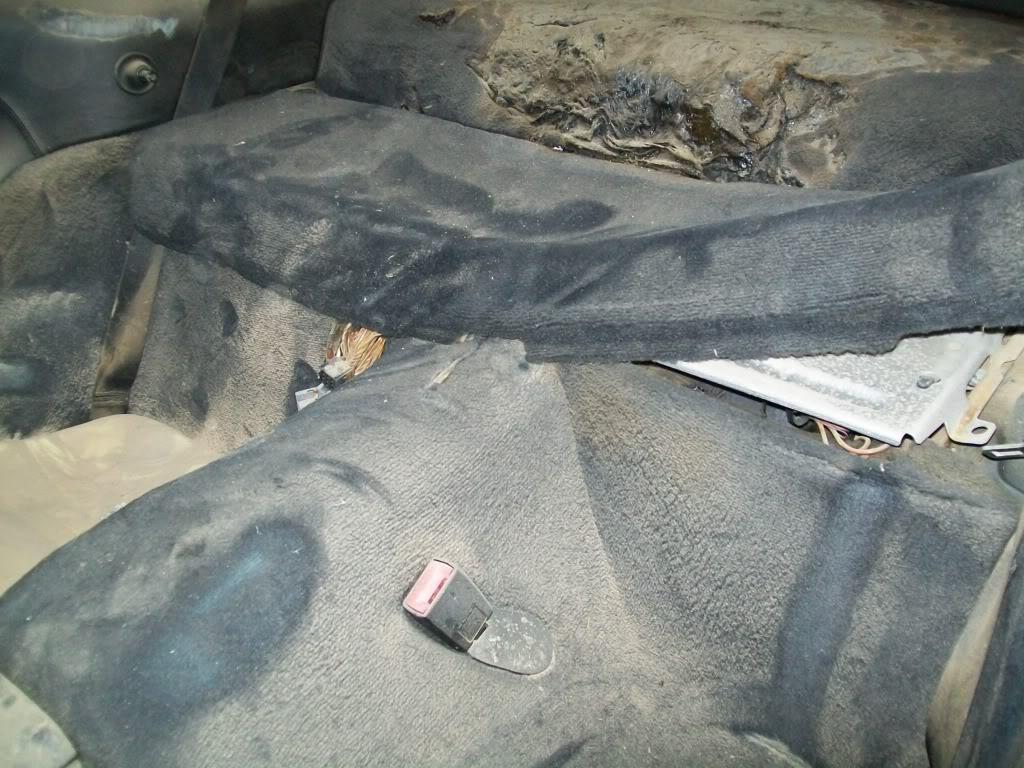 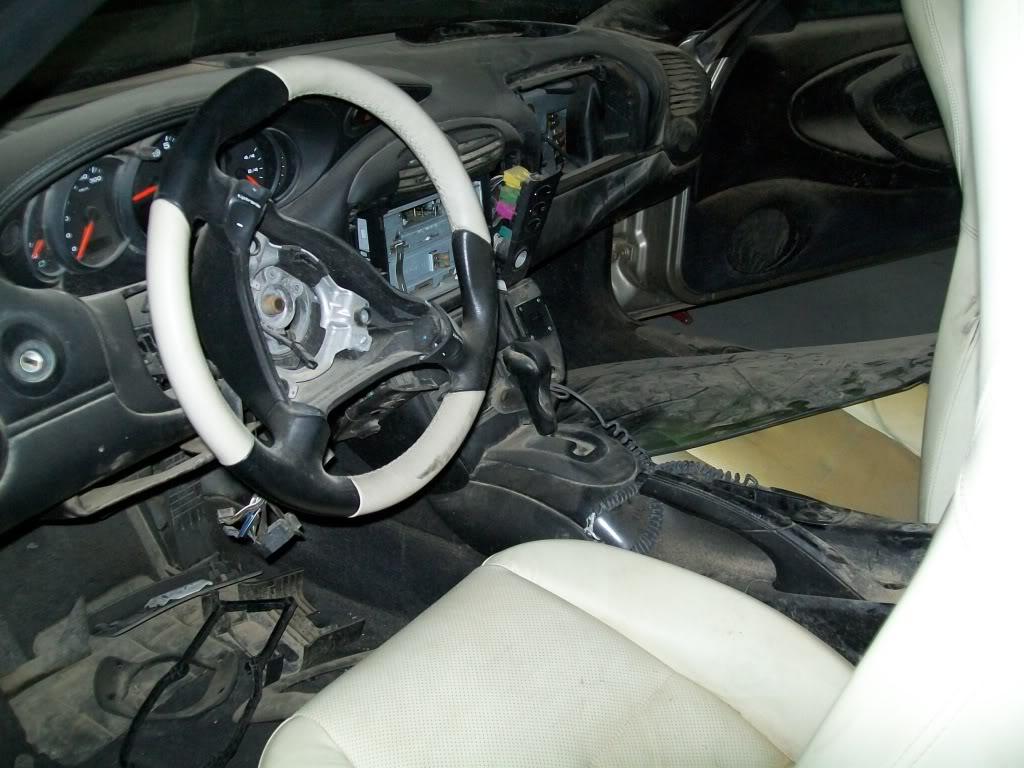 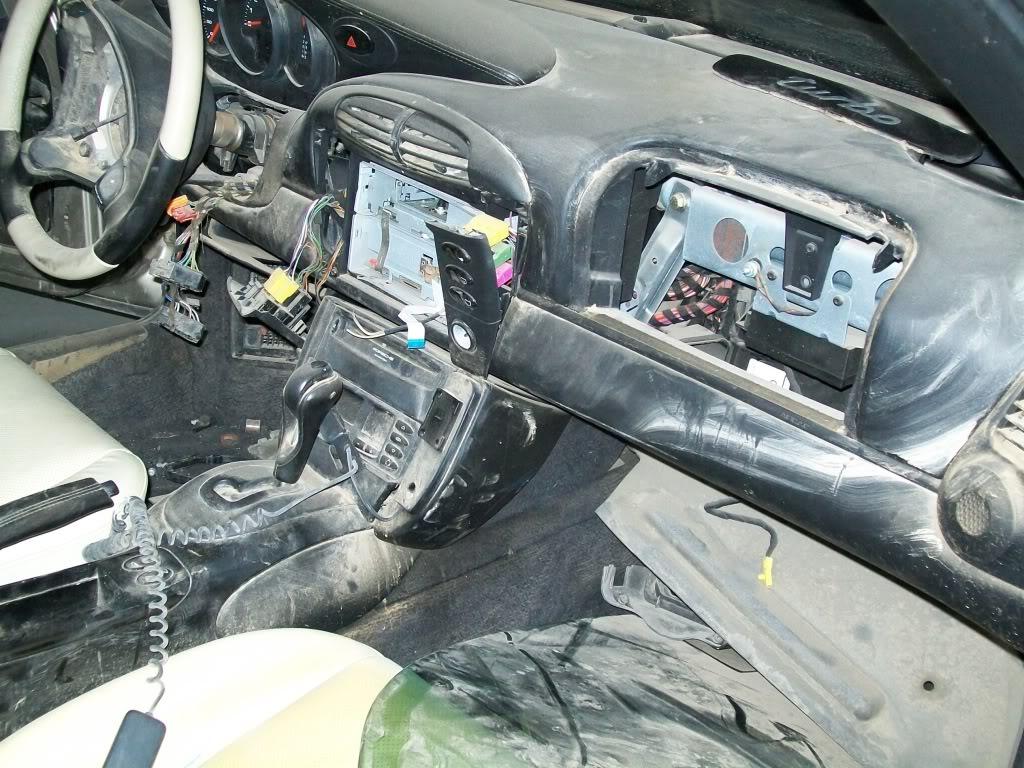 as you can see it has a loooong way to go , so wish me luck . i'll update this thread as i go .

well i intend to start tomorow , i guess i'll start with vaccuming and cleaning it out from the inside, then try positioning it properly in the garage and put it up on jackstands.

i guess tomorrow will be my tear down and measurement session

- put the car on jackstands

i guess that's it for tommorow , unless i get carried away and stard welding stuff up

i got some stuff done last night

i managed to pop the trunk,,,errr hood ,,, the lid in front of the car to gain access to the battery compartment , took the steering wheel and seats out , vaccumed the interior ( still need to wipe down everything ) . 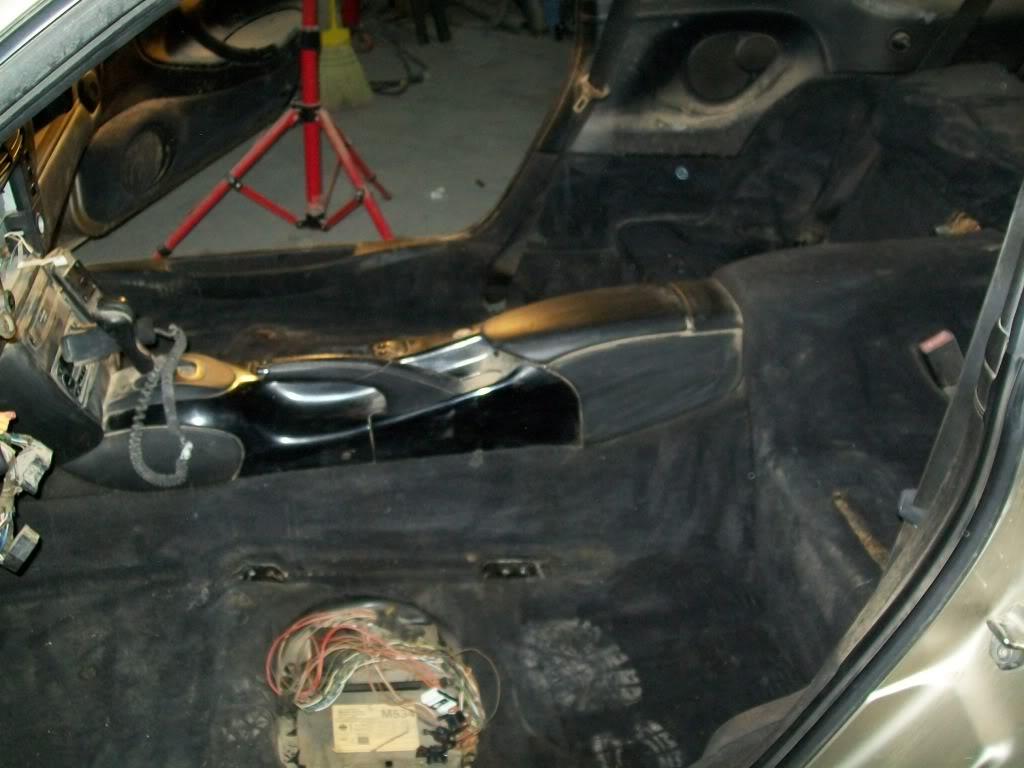 i then started cleaning up the engine compartment ,,,, lets just say cleanning after a fire is not cool 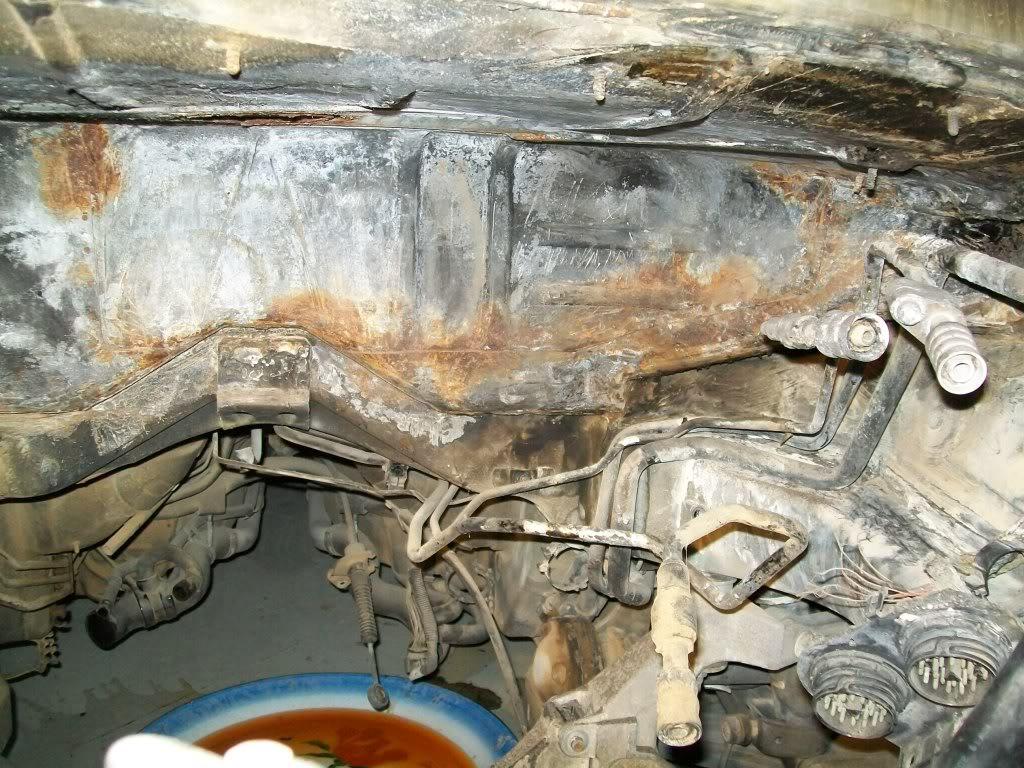 i took out what was left of the coolant expansion tank and radiator hoses ( check out the funky hose!) 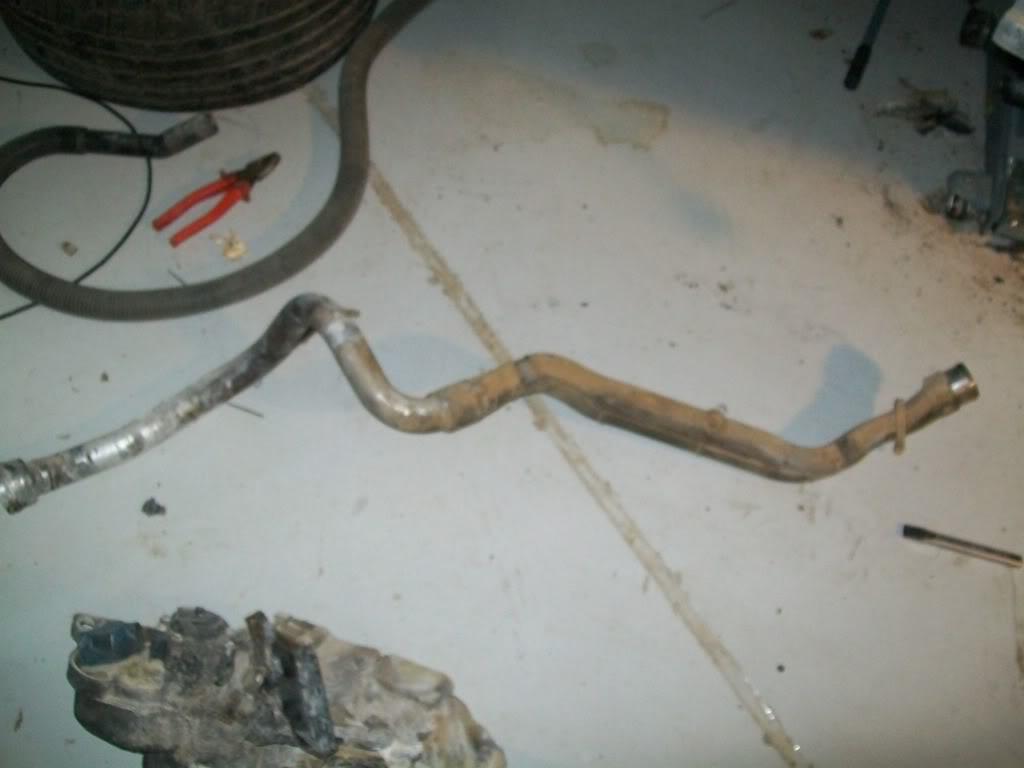 and started cleaning and scraping the whole place ( not done but getting there). this is a bit hard since i can't remove all the fluid lines ( a/c , coolant, fuel , vapor) cause its a pain in the @$# to do so , so i just moved them a bit just enough to gain access to whats behind them so i can clean and then paint the whole area. this is an ants-eye view of the engine compartment 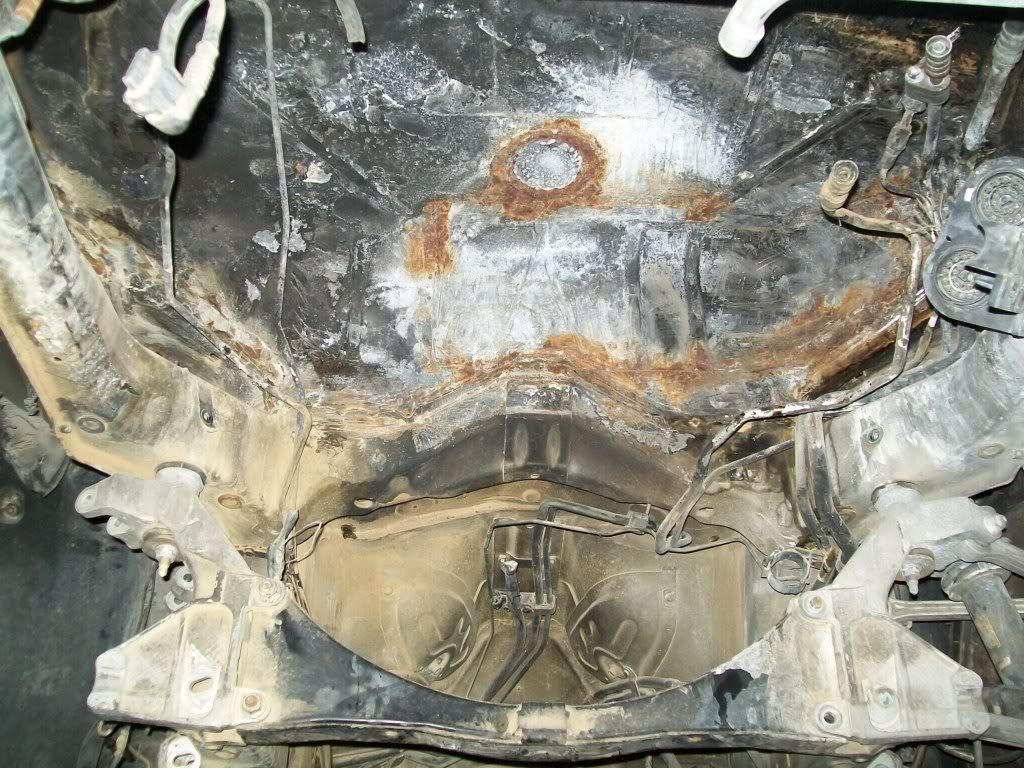 the plan is to have it painted and then put some reflective sheilding/insulation in certain areas to keep the cabin cool. i also thre the mockup engine in again to see how its going to sit ( the car was now on the lift , aso i can better judge ), i seems its going to be fine ( but tight ) as long as i use a shallow accessory drive ( vette ) , problem is i can't judge exactly till i get a tranny in there. while i was cleaning the interior i found this : 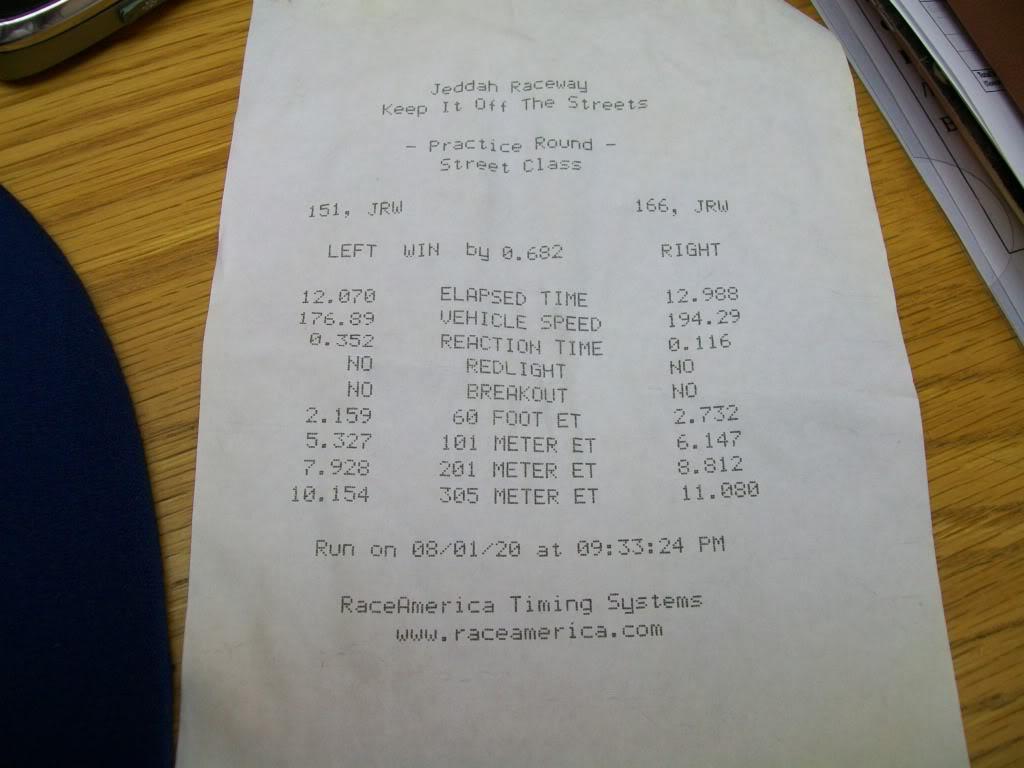 i'm not sure which lane the car was in , but i pan on beating either time by a full second (speeds are in kph and are109mph and 120 mph respectively)

so next on the seemingly never ending to do list :

- clean the engine compartment some more , probably with a sander

- take the wheels off

- remove the rear carpet inside

that should keep me occupied for a few days