Report This
By Squonkwerkz Garage

I figured I'd make a dedicated thread in the off-topic section for updates of my ongoing project that a few of you might have seen the posts and questions for: shoving an F136S from an 06 Quattroporte into an 01 Porsche Boxster. I'm hoping to have it moving under it's own power by November, and to meet that goal, I'm doing my best to accomplish at least one task per day.

Sorry that the pics don't begin at the beginning of the car. Was never really one for documenting my work. Know that this began as a perfectly respectable 2001 Boxster, and that it spent nearly a year being abused around tracks with the flat 6 before this swap started.

Today/yesterday: Got the dry sump tank, oil lines, and fittings installed. Used the OEM hardlines where they connect to the engine and welded a bung to each one for the AN fitting. Put a generic ball valve at the bottom of the sump tank so the oil won't drain down into the engine when it's sitting. Used some extra-fat hose to try and stay as close to OEM oil line diamter as possible. 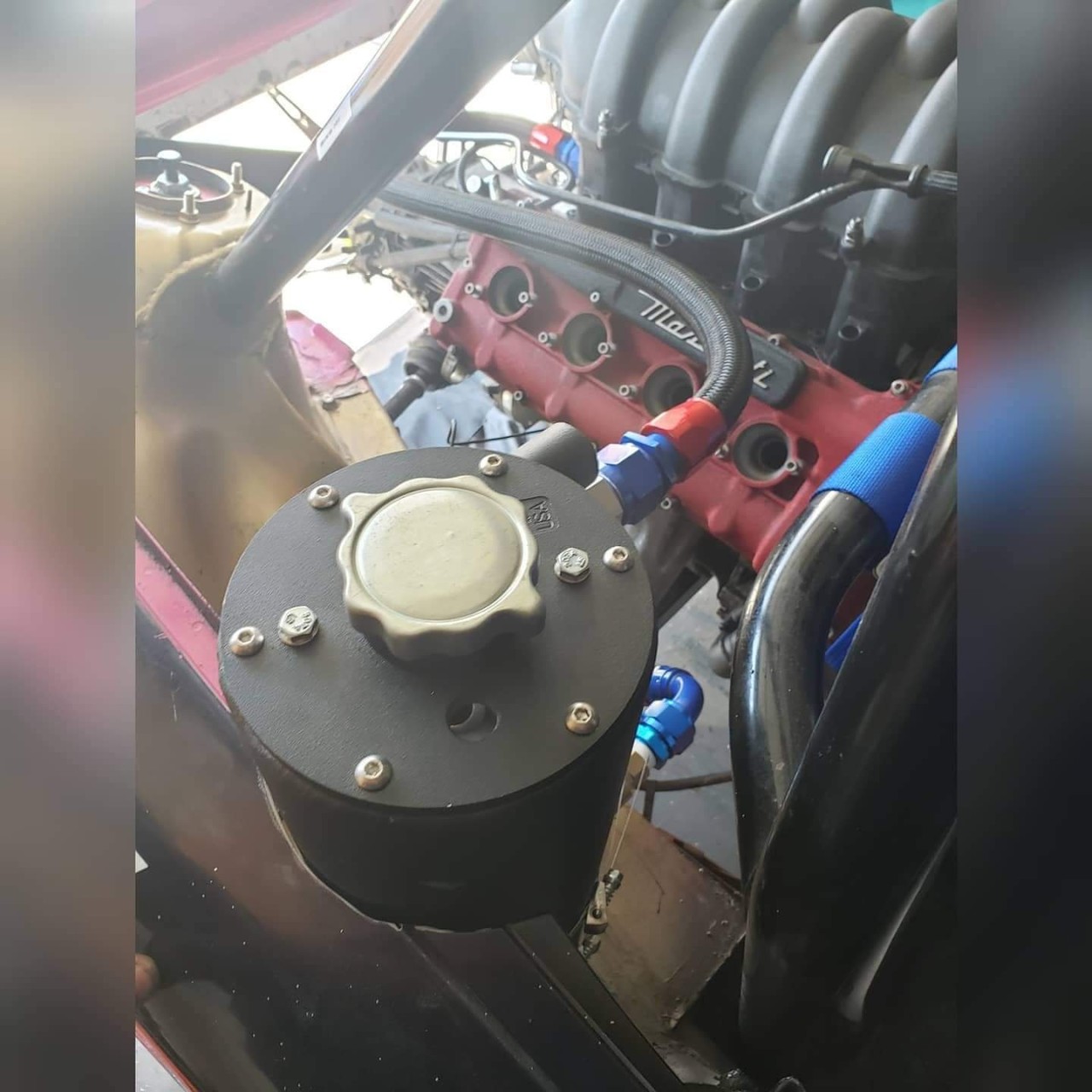 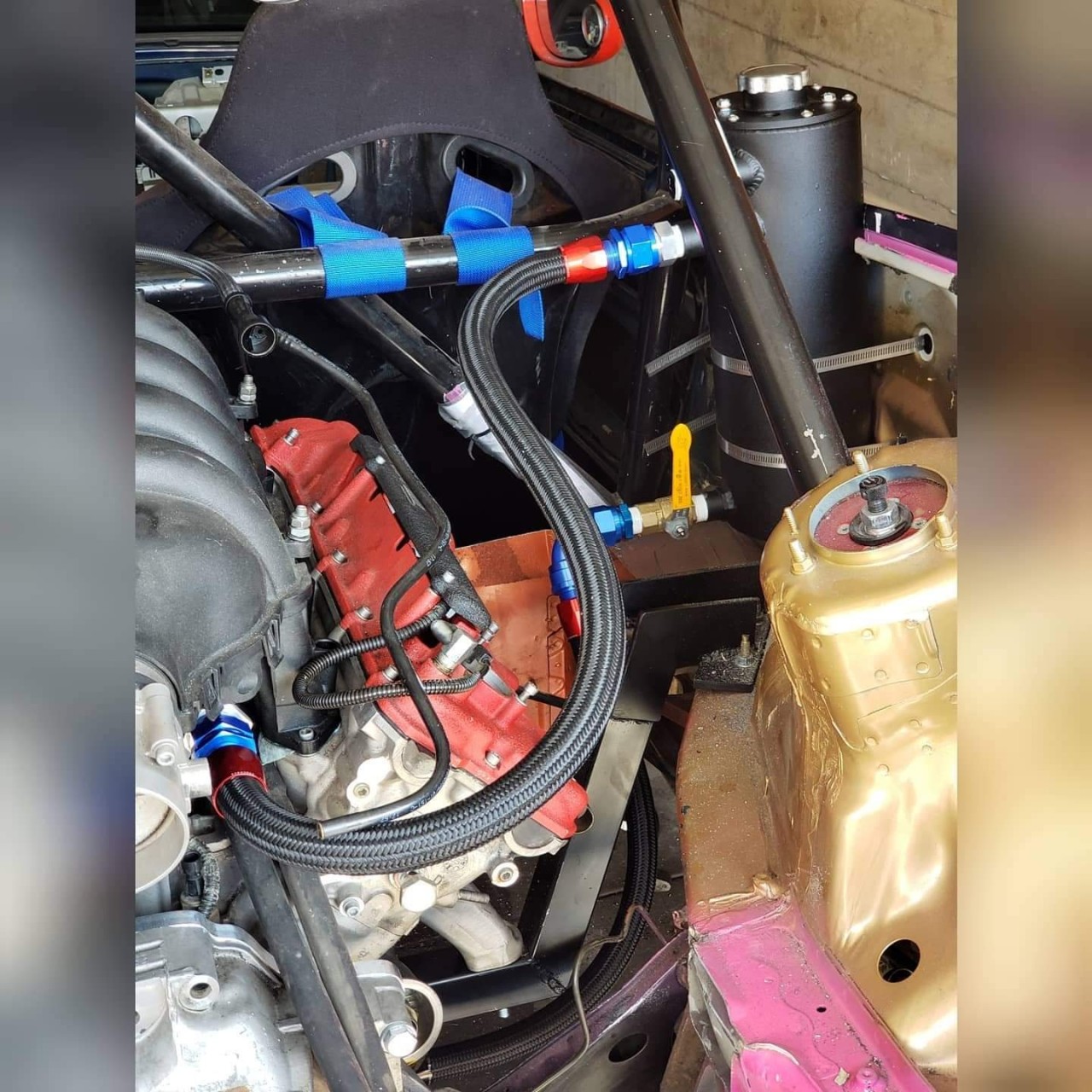 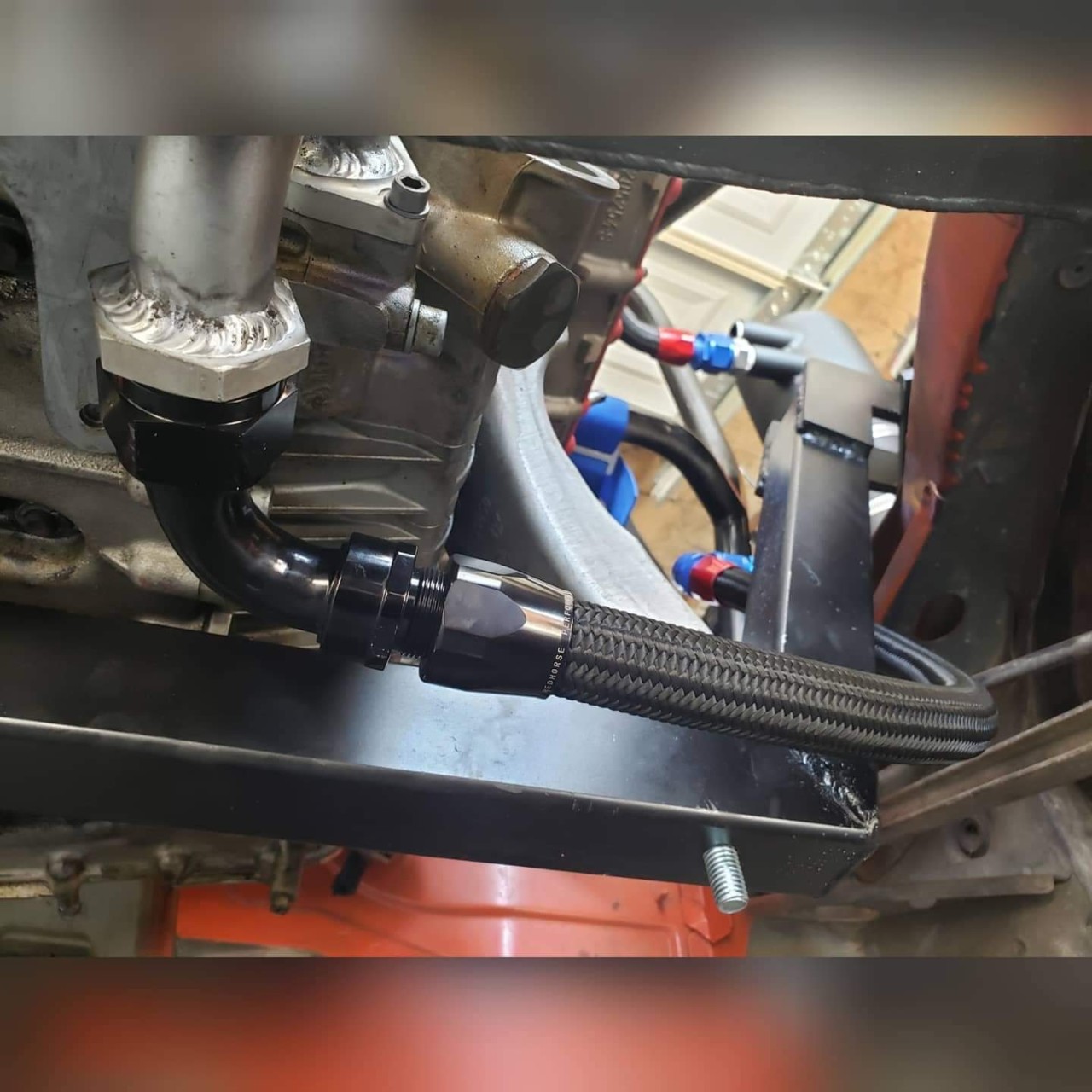 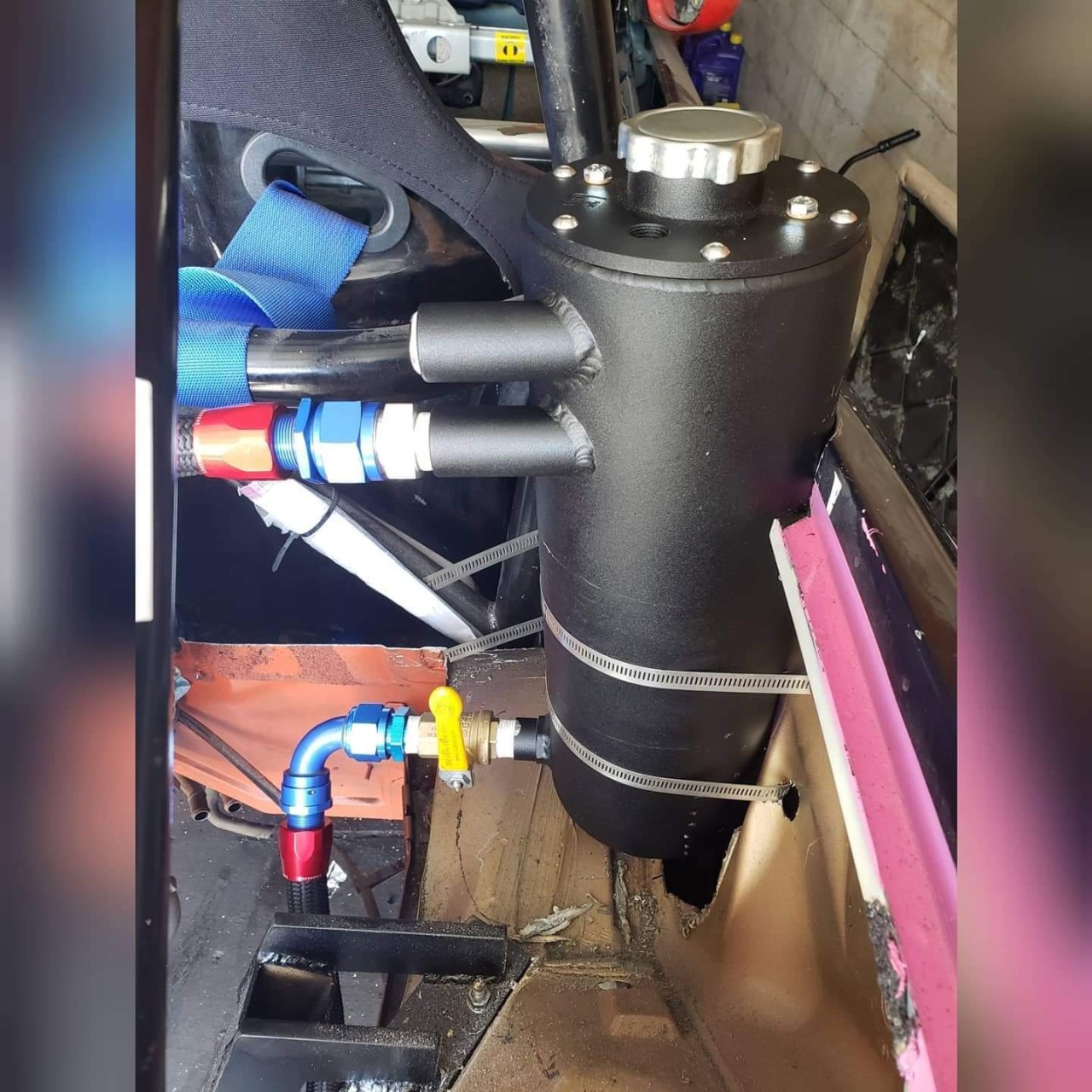 If you want to see pictures of anything else on the car, or have questions, comments, concerns, and/or torches and pitchforks, feel free to leave a comment. I'll try to remember to update this regularly.

As for the oil tank mount, it's (probably) not permanent. We just want it held in place for the time being while we get everything installed and situated. Current goal is get the car running and moving, then afterwards refine into a race-ready level. We have some plans for a neat little aluminum bracket, kind of resembling the fire extinguisher mounts you see in racecars.

That being said, I tested our current mounting method by grabbing with both hands and wrangling it around as hard as I could. It didn't budge. It's much sturdier than it looks. Those bands are about 3/4" wide.

Man, if the oil tank makes you nervous, I can't wait to see your reaction to our plans for the radiator!

I had the MAF from the Porsche, and I was going to used that, but I suddenly can't find it. Researching options now. I was leaning towards buying a generic MAF and intake adapter tube for it. (Hitachi or something similar.)

There's actually a company that makes kits to put an LS engines into a 986 Boxster, which is the exact reason I didn't want to do it. I wanted something off-the-wall and interesting, but still a good performance car, and this is where I landed.

As far as upsetting the balance of the car or anything like that, any of the aluminum LS engines should pretty closely maintain the weight distribution of the car. The M96 flat 6 that came in them is extremely heavy for it's displacement. The F136 weighs roughly 20 lbs less, with nearly double the displacement and power! (I think the complaints about 'balance' are from guys who weren't ready for that amount of power...)

Today's progress was getting the fuel lines cut and ran. Waiting on one more small adapter to finish it off, but it's complete other than that. 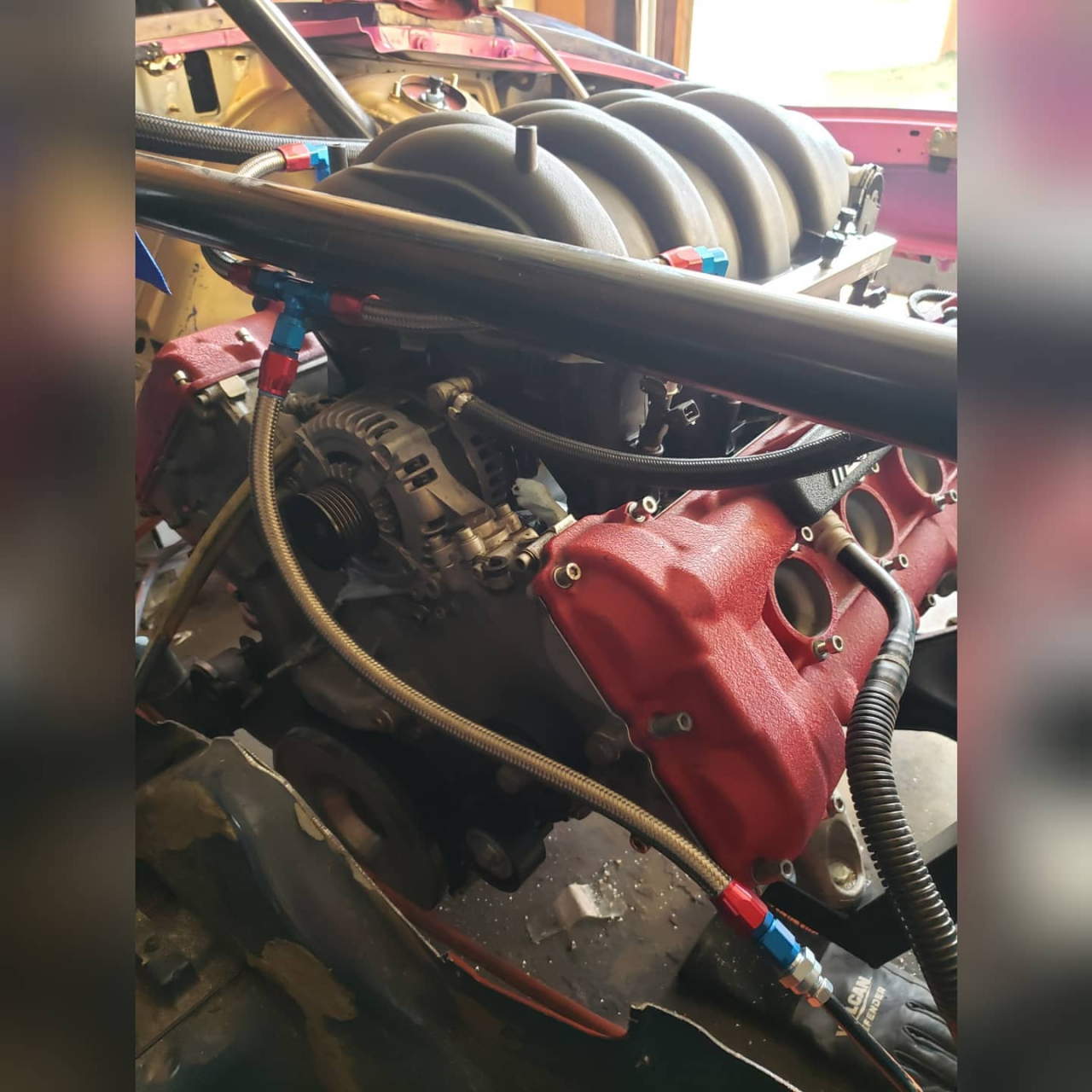 Also, got the brain and wiring harness today! 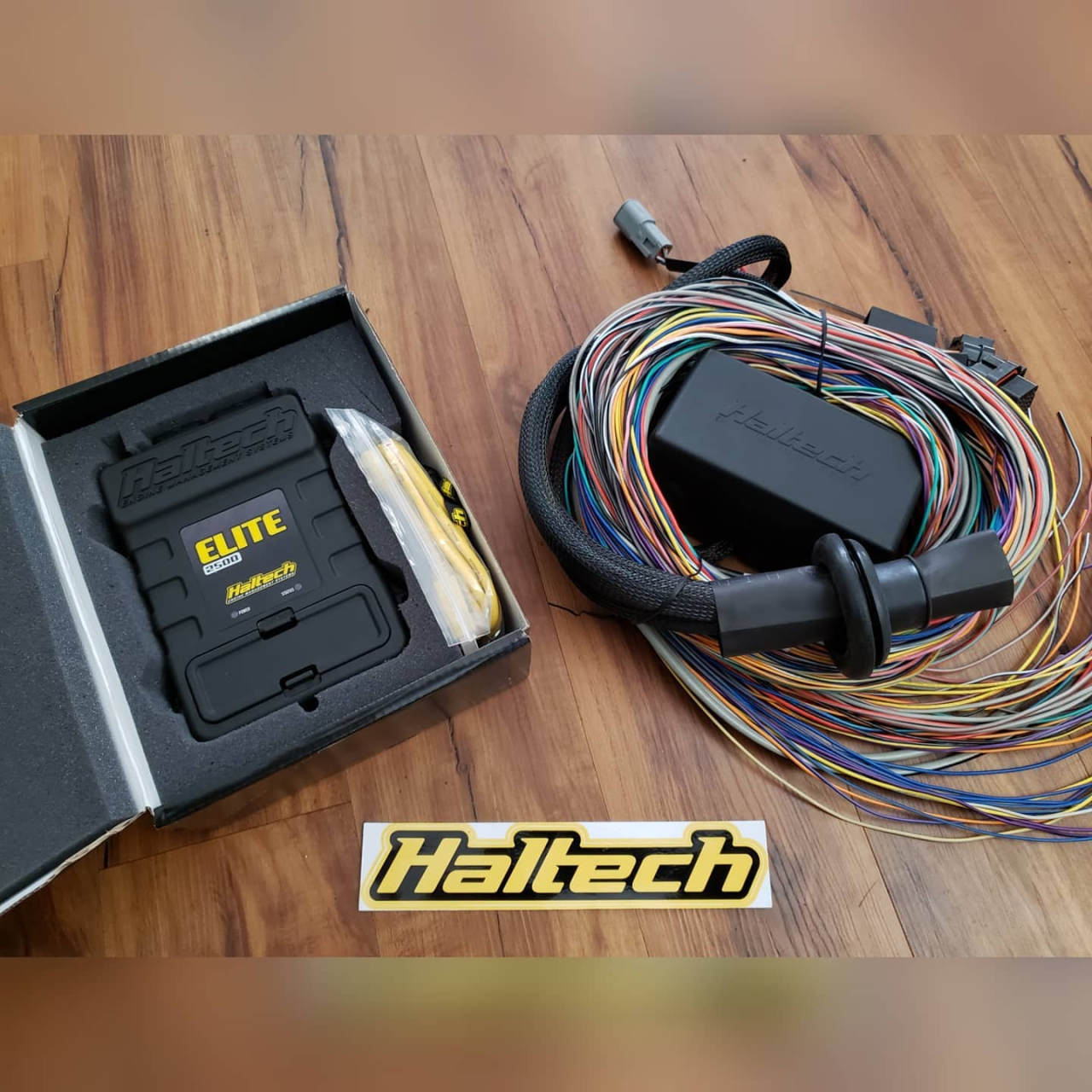 Yes, the factory manifolds seems like a very well flowing design, and are an order of magnitude less expensive. As for the rest of the exhaust, we're thinking about going up into the space that used to be the truck and fitting in some good mufflers. We'll run without them most of the time, but SCCA has a 95db limit at their events, and that makes me sad.


Thinking of which, do you have a cheap source for the factory manifolds? They don't even have to be all that nice, just intact.

Edit: Just got both sides exhaust manifolds for $55 each from a place in Oregon. 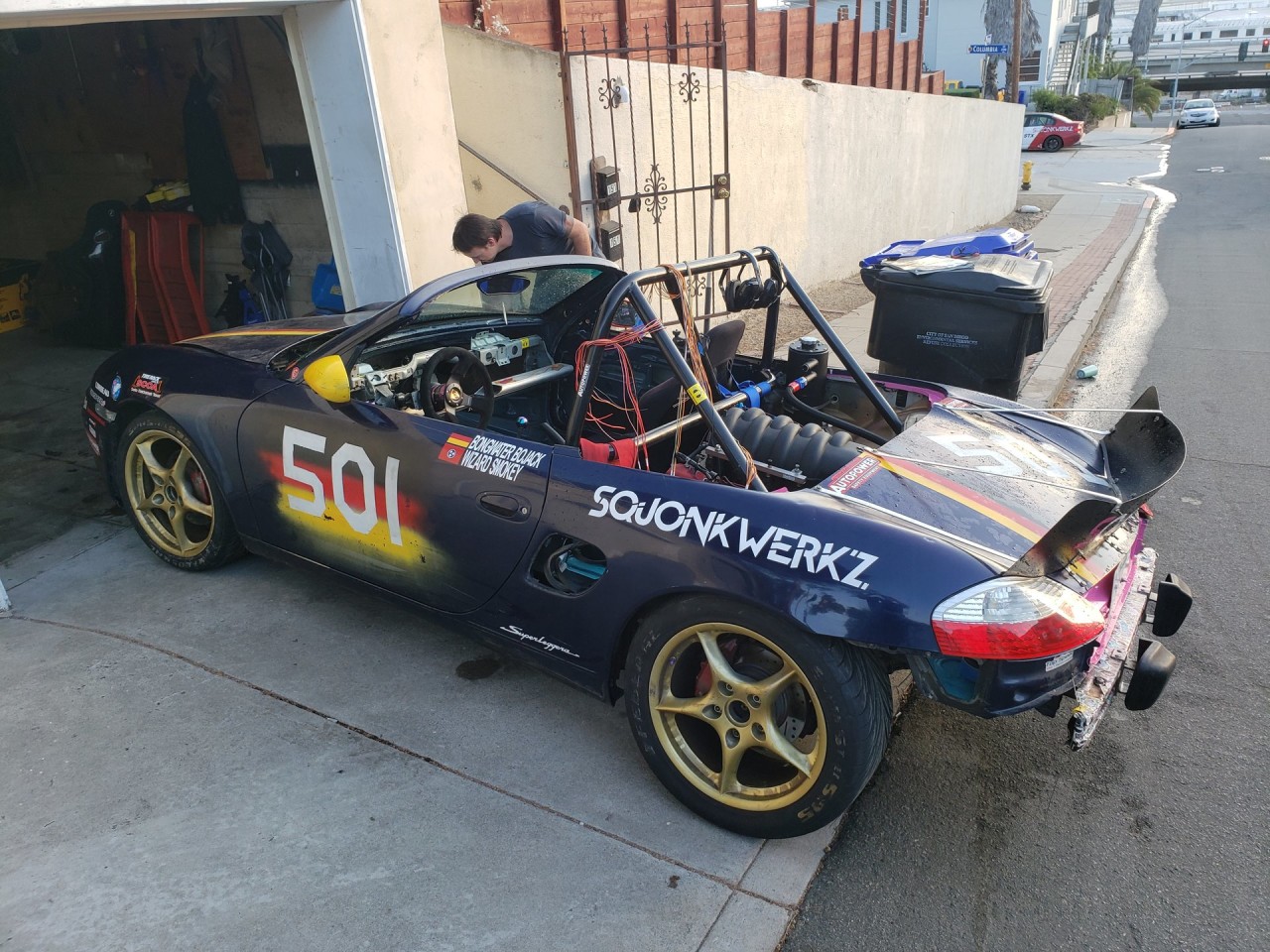 Random update: Pushed the car outside and hosed off the areas we're not working on the wiring. This is the first time she's seen sunlight in almost a year. 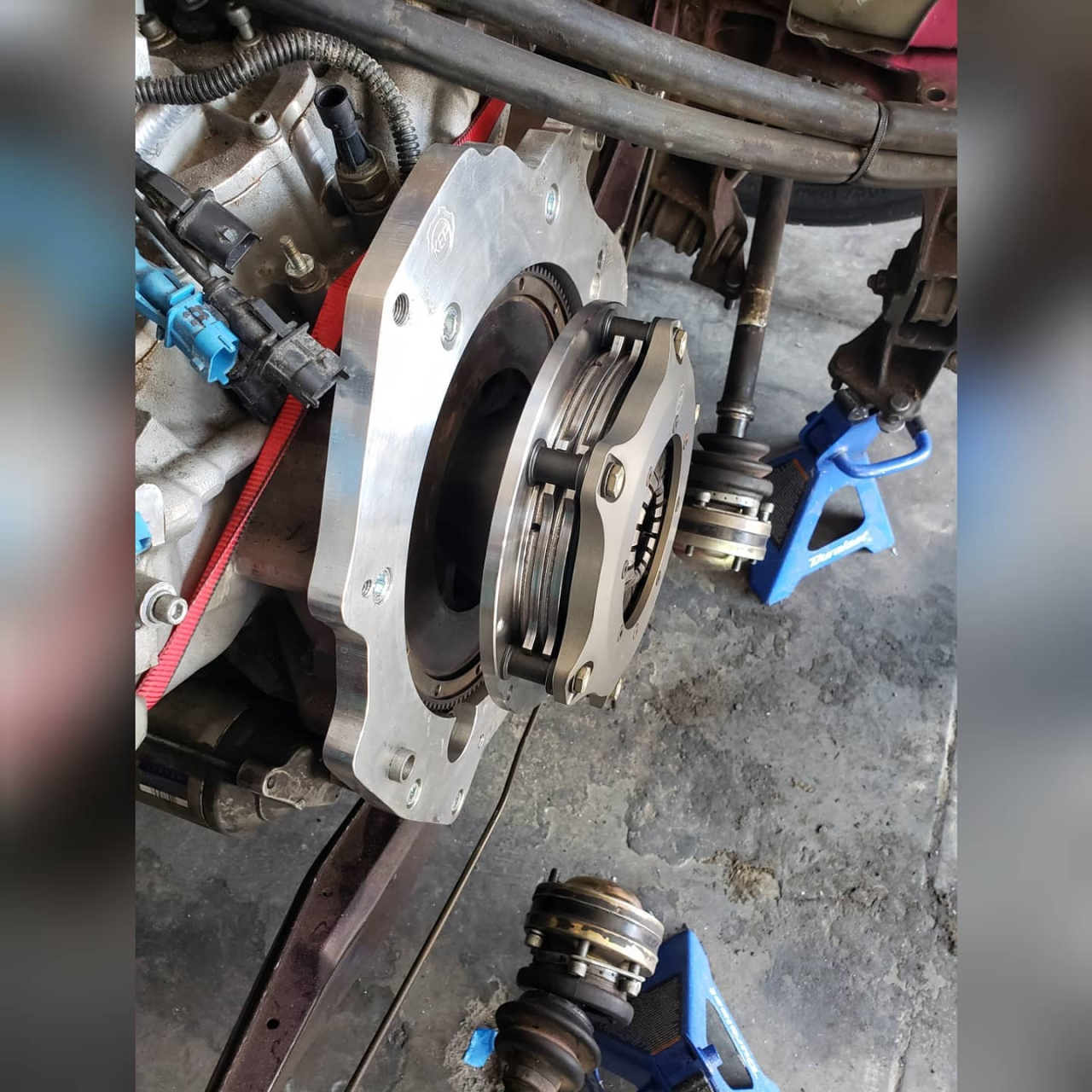 If you're wondering what kind of goofy ass clucth/flywheel setup is used to connect an F136 to a Porsche G86, here ya go.

Porsche's stock sized exhaust vs. the new exhaust. OEM headers, but all custom after that. 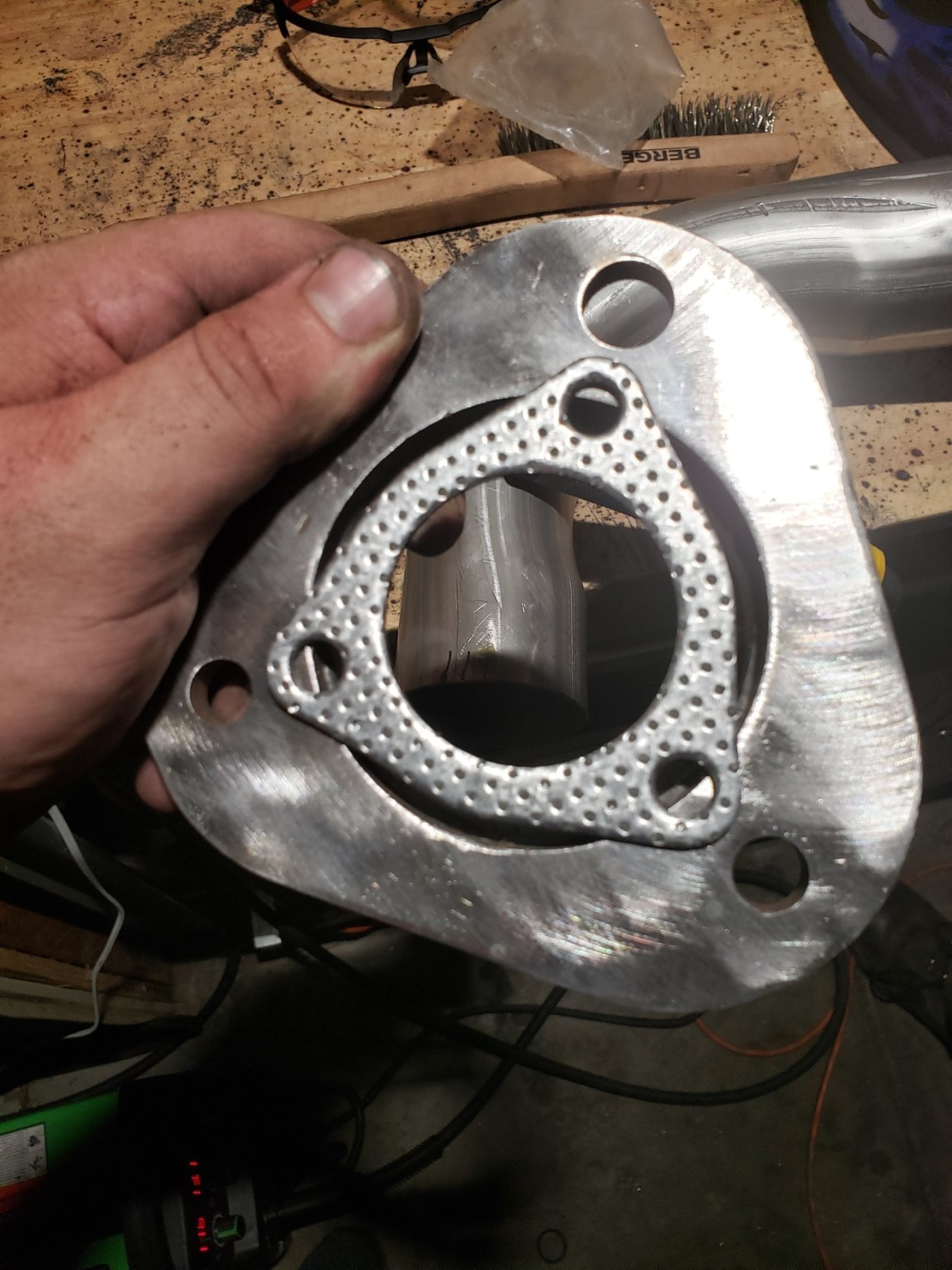 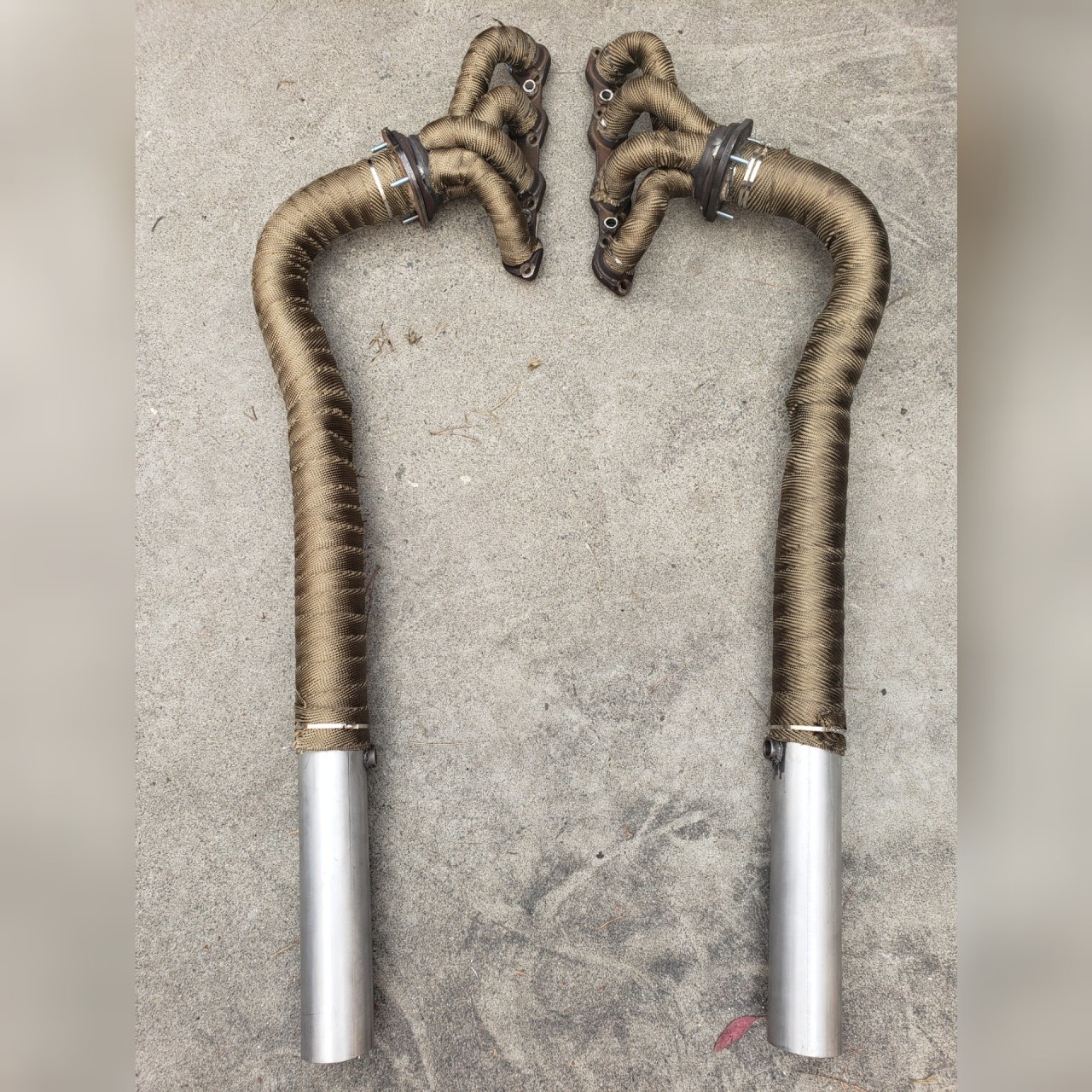 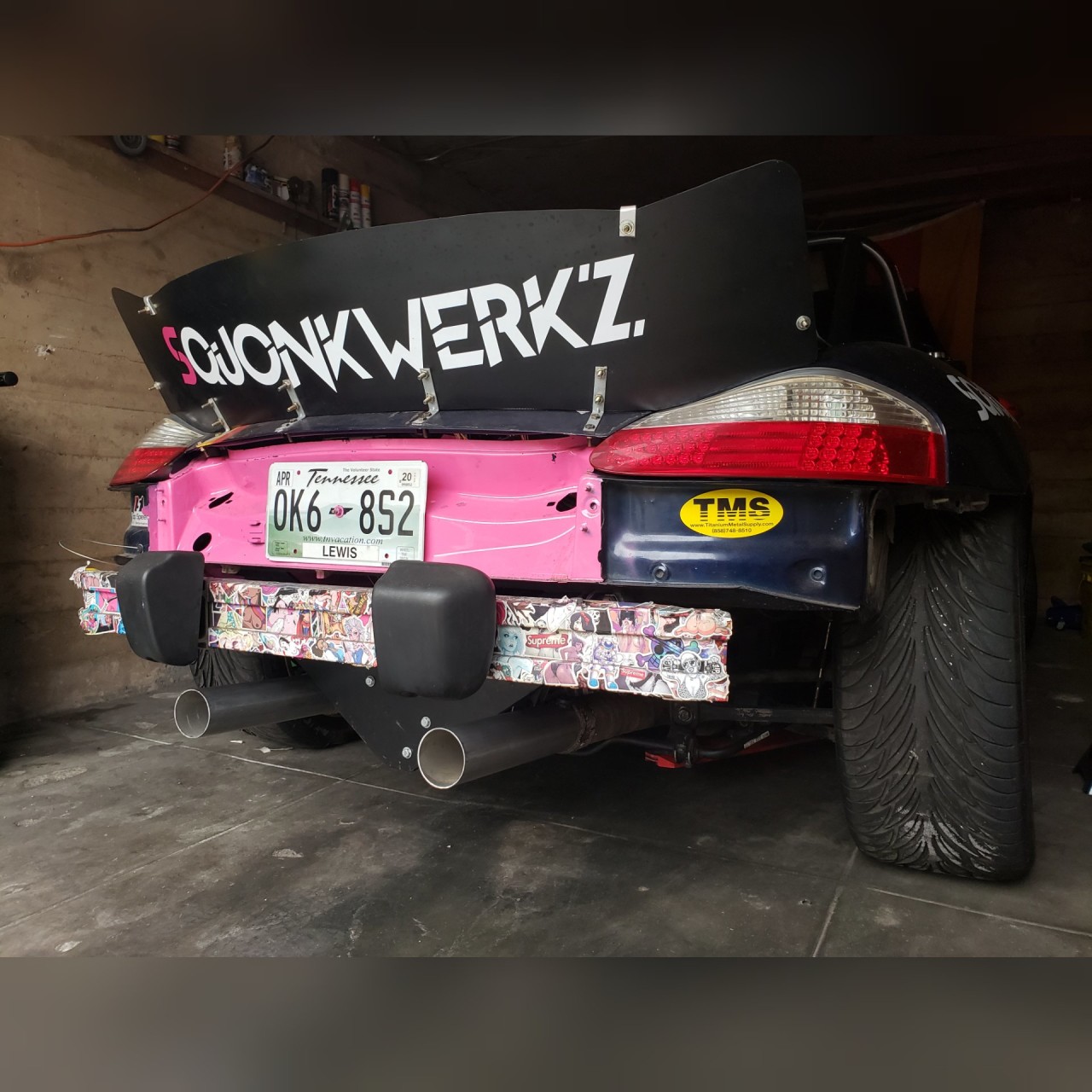 I've never heard of trapping enough heat to burn through the pipes. I guess we'll just have to keep an eye out for that. More than anything, I was concerned with keeping heat away from the wiring harness, oil lines, coolant lines, the engine itself, etc etc. I figure an exhaust pipe will be easier to replace than any of those.

As far as mufflers go, the original plan was having a set of exhausts made that go up into the trunk area and have a pair of mufflers, then side exit tips. But that will take more time to fab up, right now I just need the car to run and drive. Got a move coming up soon. This set is pretty much there to hold the O2 sensors at the appropriate spot for baseline tuning, and not much else. Besides, the dual 3" pipes are waaayyy overkill for the displacement and power output, but it was what we could grab at a local shop. We want to do 2 1/2" pipes, it'll give us a better amount of clearance from the axles and other stuff under there, as well as suit the application better and flow more smoothly.

Fab'd up an adapter to put a normal oil pressure sensor where the 'low oil' light switch sender was. 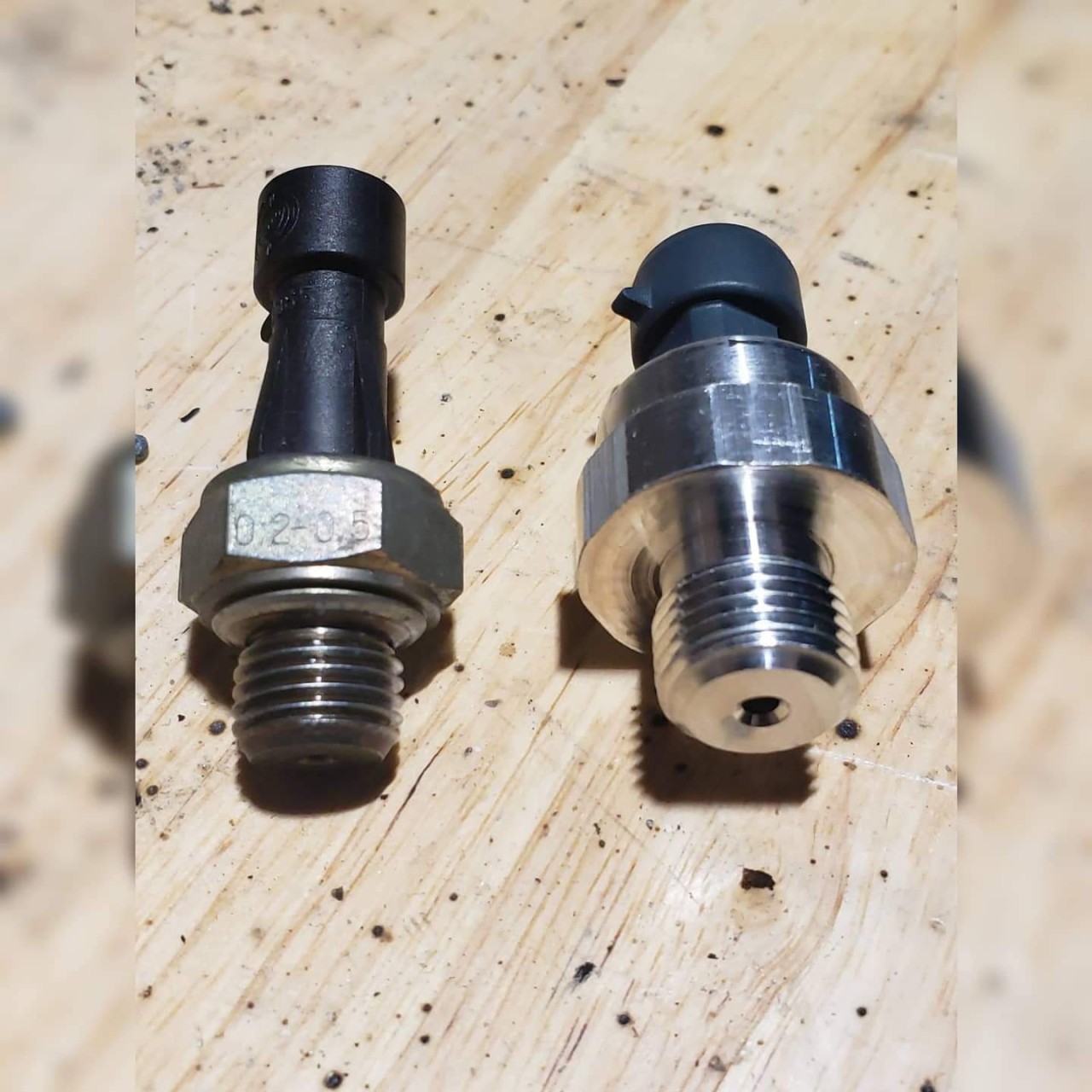 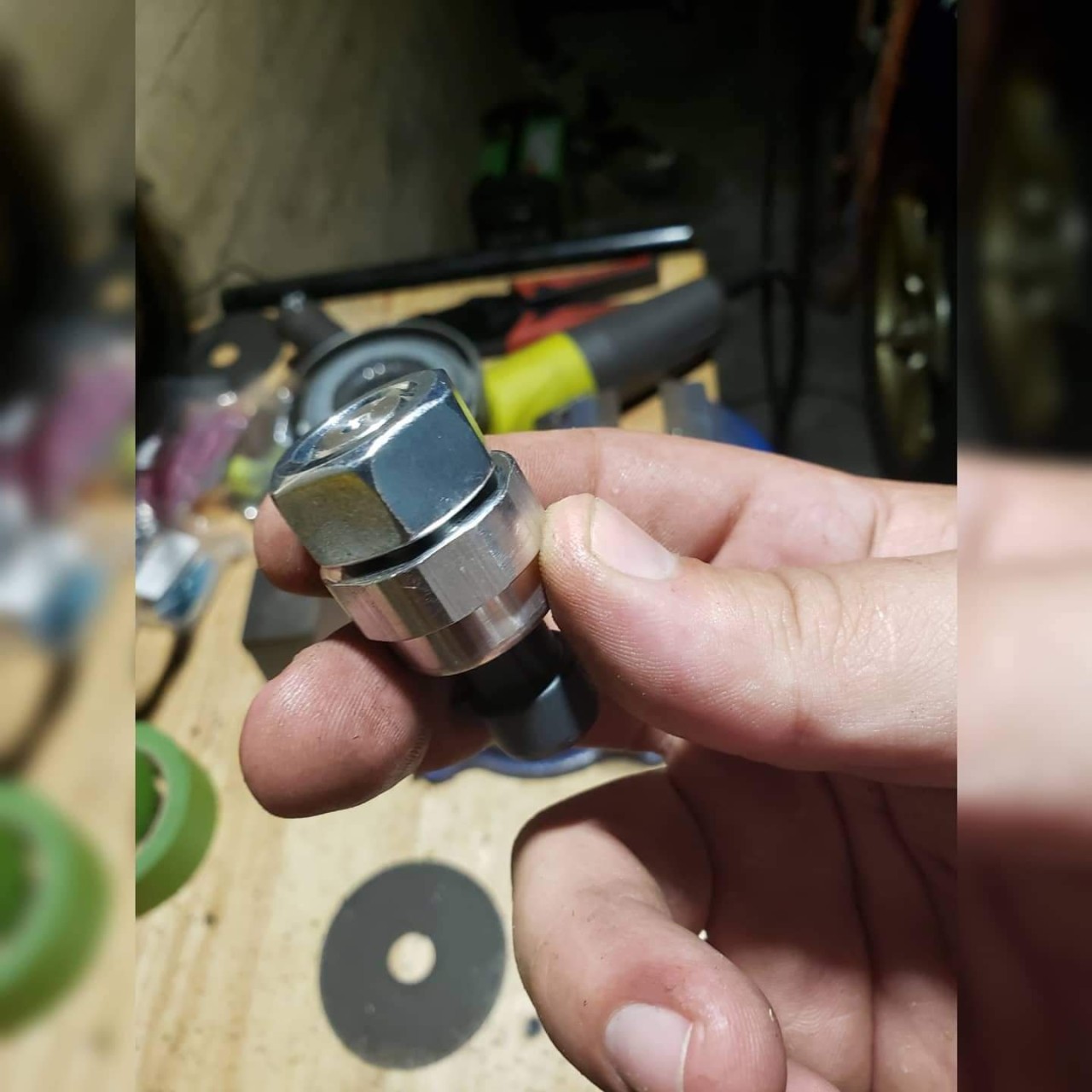 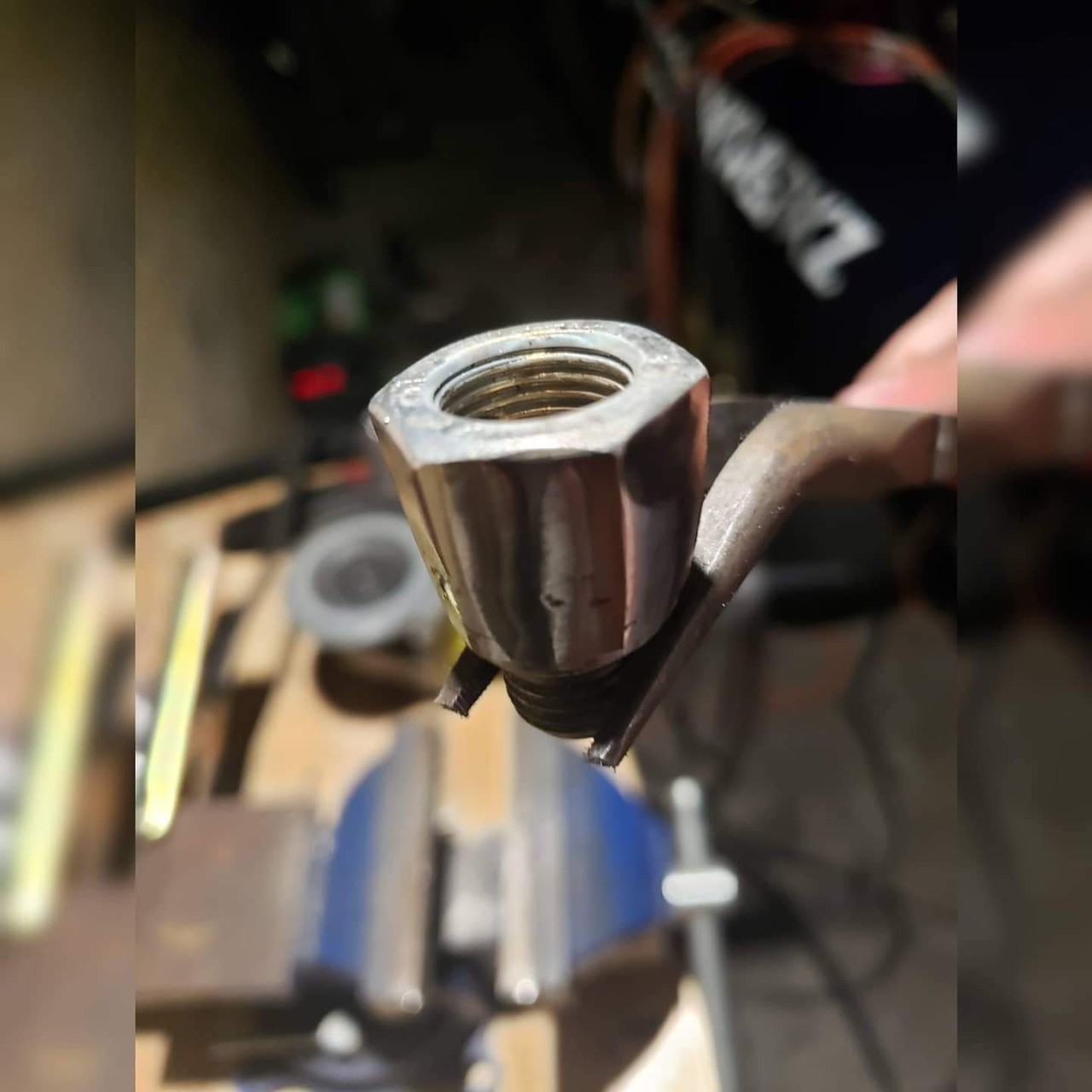 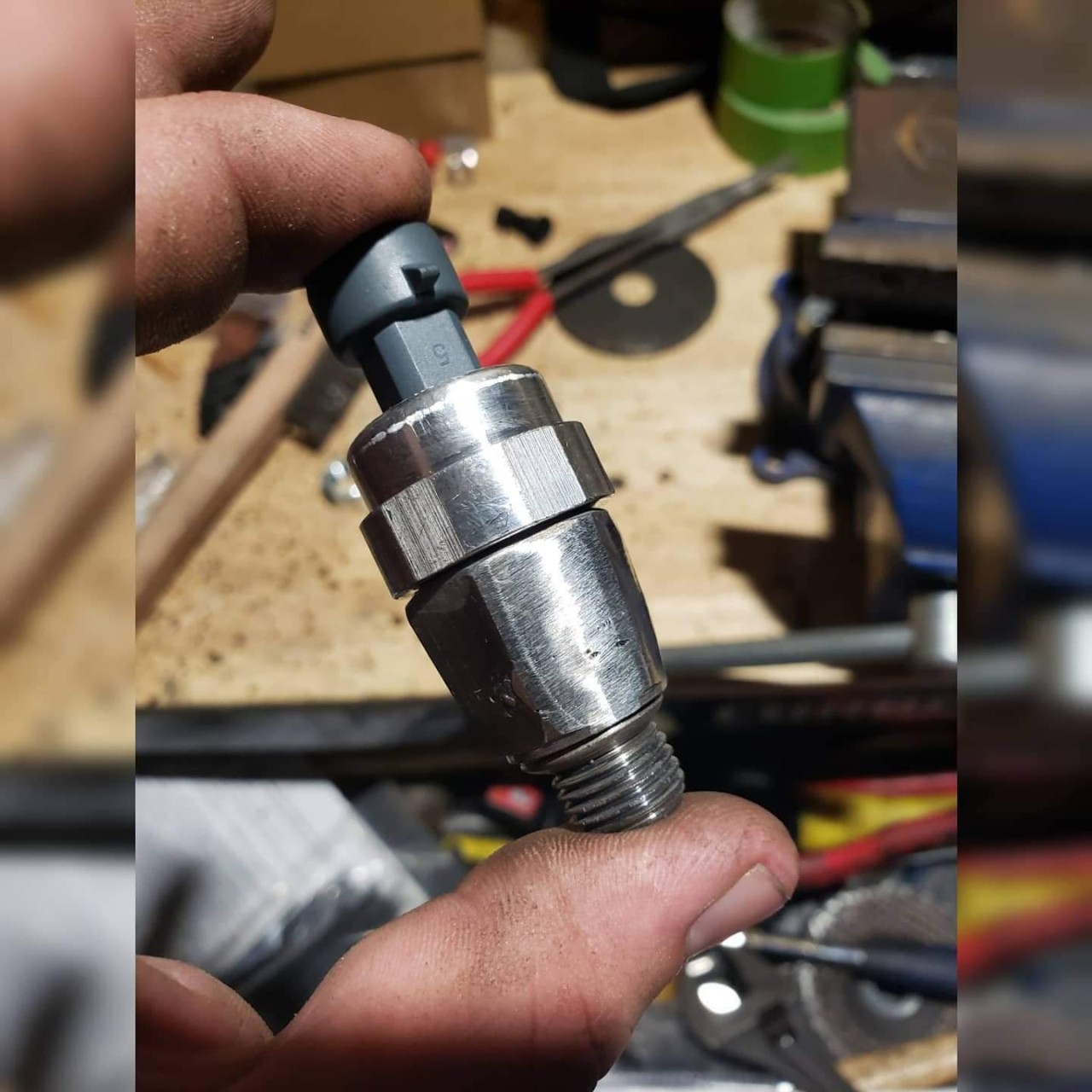 Due to some work related bullshit, he wasn't able to record and post this update, so I'm throwing it up for him instead.

Don't want to jinx it, but there is definitely a possibility of this machine running within the next week. Fingers crossed things go well! 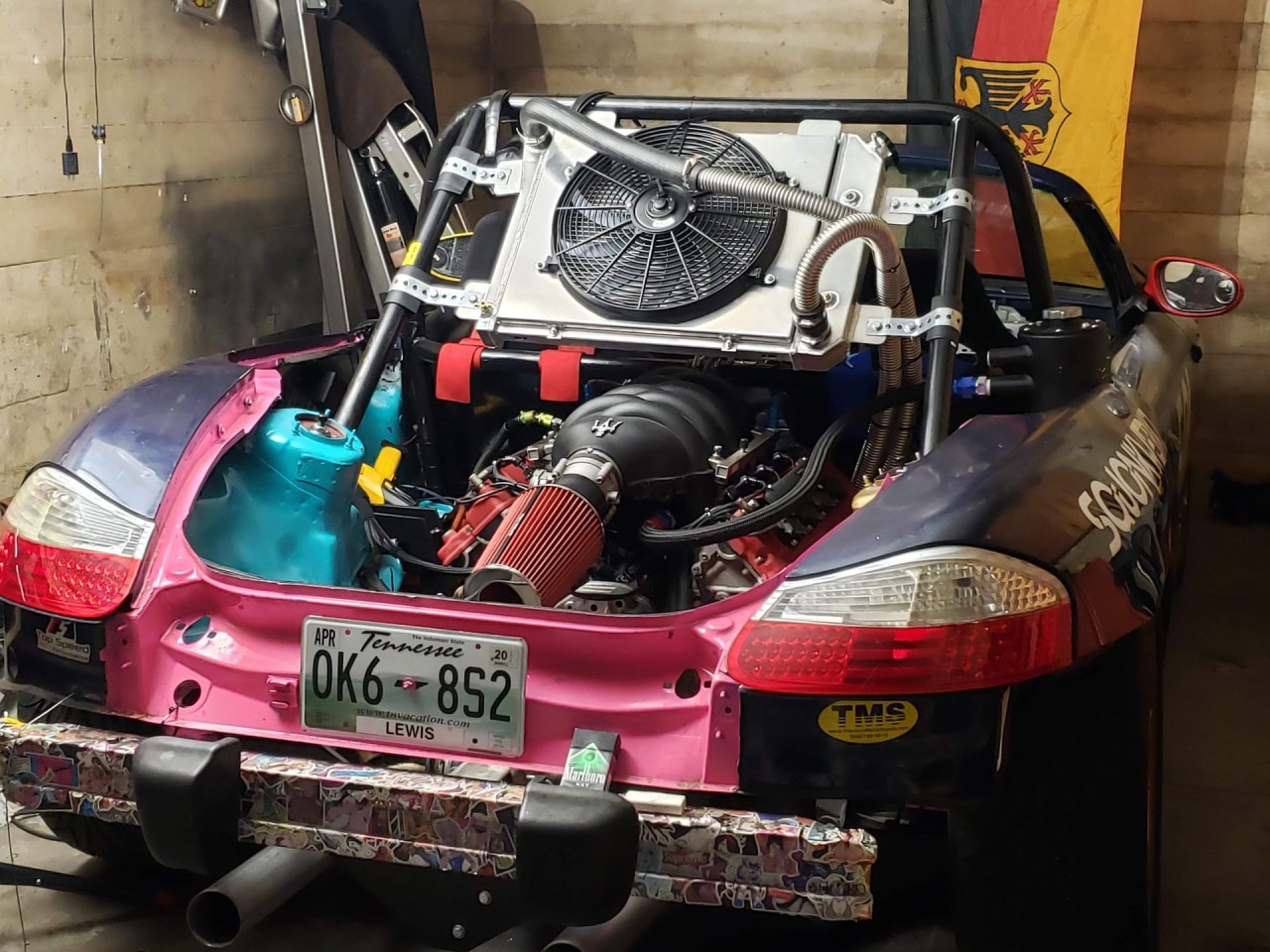 At this point, it's 99% done. Just a few little details need finished up. Waiting on the Magic Tuner Man to come down and sprinkle his wizardry upon it.

Also added a little something for the haters. 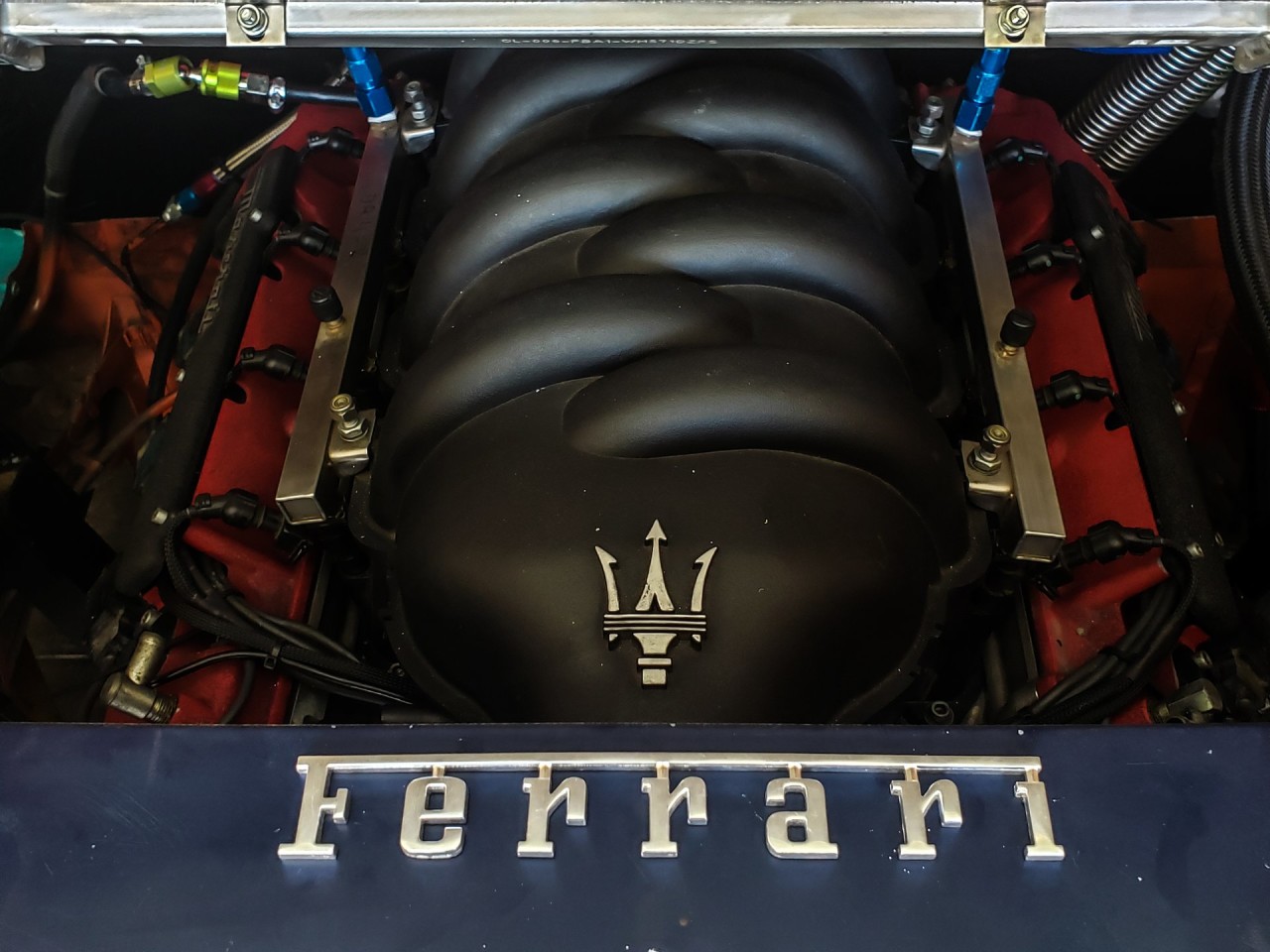 Definitely didn't fire on first try. Biggest issue we ran into was the flywheel sorta coming apart. I was not aware that the ring gear for the starter and the flywheel were separate parts.Turns out that was wrong. So we had to pull the transmission, take off the clutch, take off KEP's freaky adapter kit, and finally the flywheel as well to go get fasteners to properly attach the ring gear. 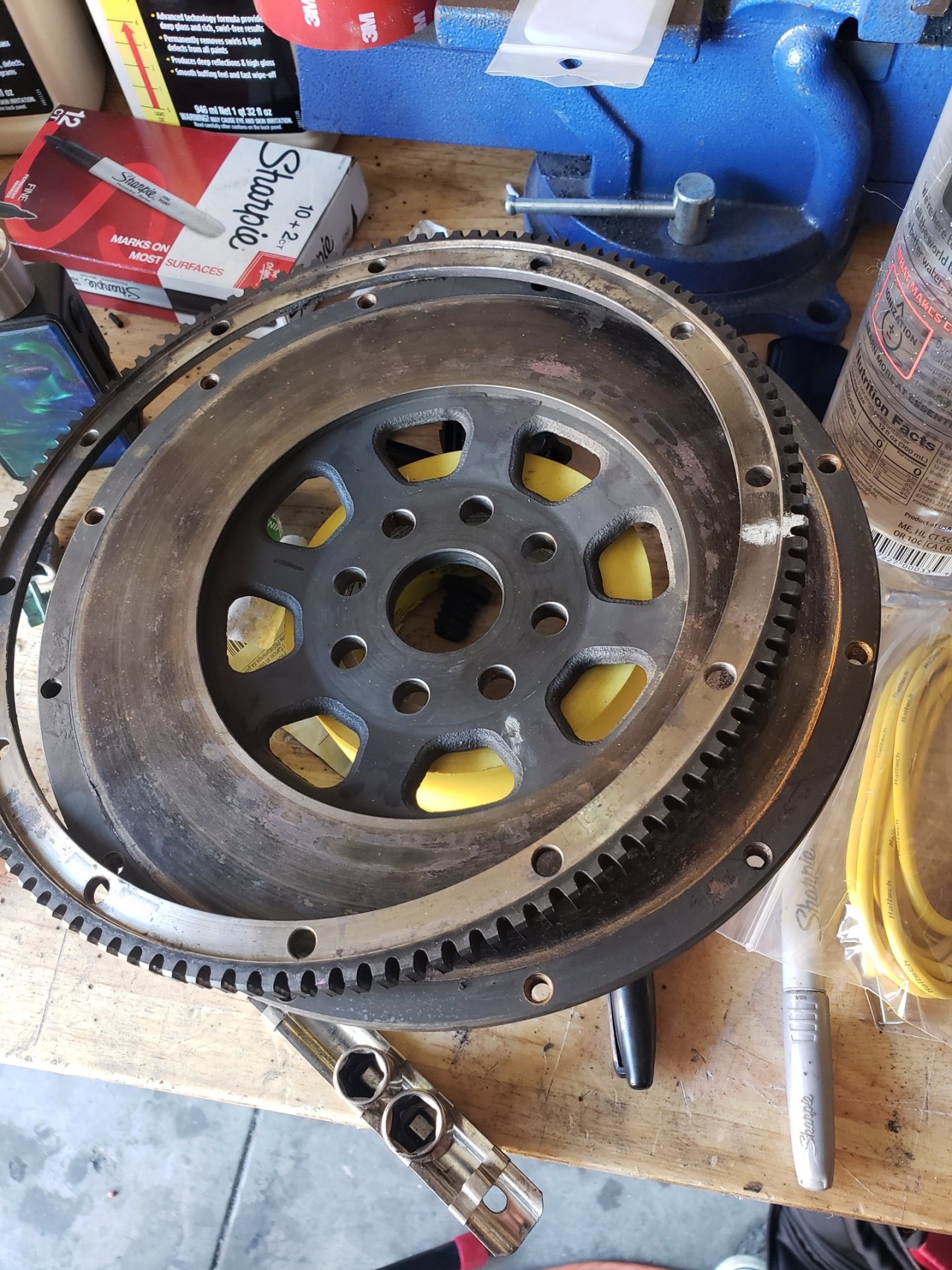 However, once that was done, things were relatively smooth. Sean, the tuner, just had to spend some time figuring out the timing, and it turned out that I wired the oil pressure sensor backwards. But that was honestly it. All in all, about 6 hrs of work with frequent breaks.

Now the coolant just needs to be bled, the alternator needs to be hooked up properly, she needs some nice fresh fuel, and then it'll be time to look into taking it to a dyno to properly adjust the fuel map.

Haven't been able to move this car since November, and here she is rolling under her own steam! Finally gave me a chance to properly clean the garage.

Went for a quick spin around the neighborhood and touched the throttle just a little. This thing is pretty scary already.

Looks like I’m going to be looking at Maserati engines on eBay now 🤣 Sounds so good! 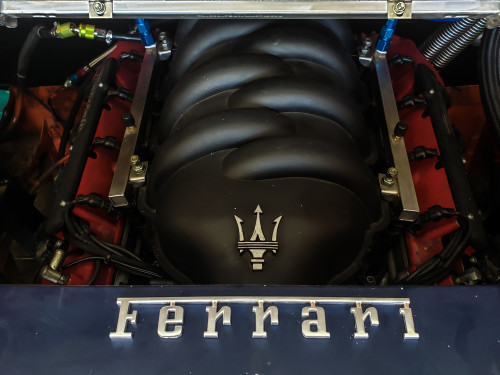 If you do go that route, feel free to hit me up for advice. Hardest part about this swap was simply not having the information needed to pull it off.

Sick build man! Surprised you can get a Ferrari engine for just $3k. That sound alone makes it worth way more than the typical LS swap. Sounds mental, and not much of a weight penalty. Awesome job! 👍👍

Thank you! The engine itself is actually lighter than the original flat 6. The reason the car's weight went up by 60lbs is largely from the steel brackets I made to hold everything together. Once I teach myself to work with aluminum, I might rebuild some of them to bring the weight down. Would love to see it scrape just below 2500 again.

Wow this is cool!