So parts have been coming in last week and fedex just dropped off a bunch of parts today. Project started yesterday will the tear down. 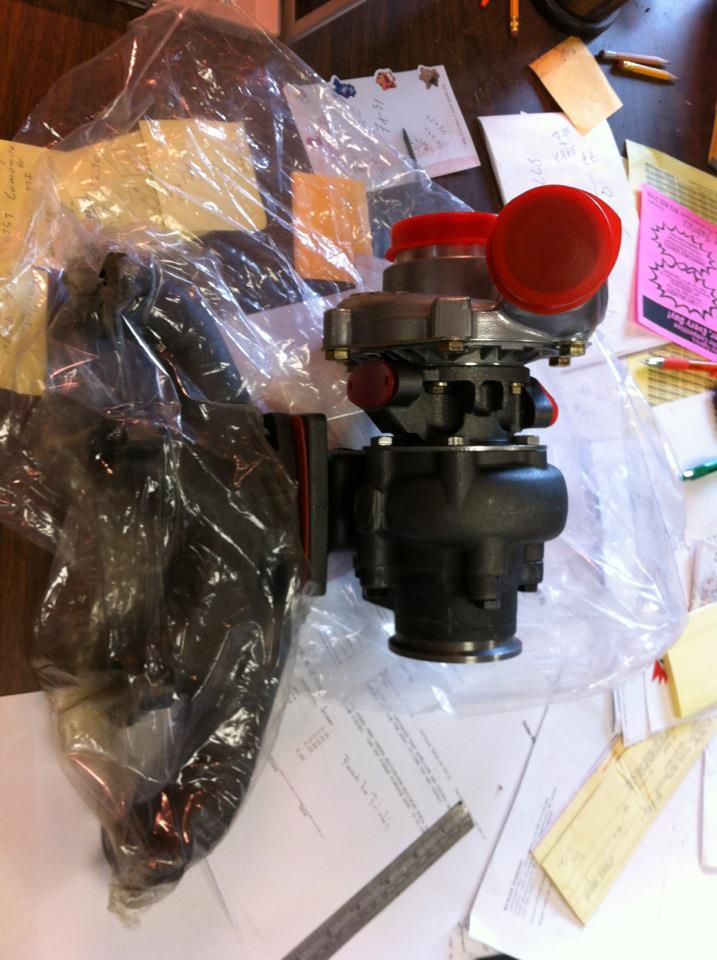 .60/.63 T3 Turbo will be compounding the boost and hopefully bring up the bottom end boost numbers and maintaining the pressure all the way to redline without sacrificing lag.

(or night1) one damn intake bolt stripped on me and I was fitting it for over 2 hours. Needed a break and to collect my self so a late night Taco Bell run with the girlfriend and came back with a new game plan. Got the bolt out, I guess all I needed was a little food in me and she is sitting with the intake, exhaust manifold, and down pipe all on the floor next to her. Hopefully tonight I can test fit the turbo manifold and bolt up the turbo.

Jake came over to play a bit. We bolted up the turbo manifold. Its just an 8v manifold so nothing special. Fit was dead on so I thought we were doing good. Well, that thought didn't last long. After clocking the turbo and wastage there is just about no clearance on the cold side to the firewall. Jake started taking apart the interior and became spiderman and crawled under the dash to see how much inside clearance we had to "move" the firewall. After a hour or so of figuring we wouldn't hurt anything, we broke out the 5 lb and a 2x2. Some persuasion and the firewall was a lot further back than we thought we could move it.

So next was bolting the turbo up again. Perfect!!!! (so we though). There is now enough room to stick your entire hand behind the turbo. Next was to test fit the intake manifold. We cut off a tab that was not needed (what really is needed on the corrado intake manifold anyways). Surprising a cutoff wheel is slower than a cheep wood hand saw lol. Set it in and ... crap the .60 A/R cold side it hitting the intake manifold. After countless ties to take the turbo out, reclock it, put it back loose and clock it, there is no way to get it to clear. I was just going to get a smaller turbo

but Jake wouldn't have it lol.

We decided that we can space the turbo back (towards the clearance firewall we just made). So this morning I'm having a 1/2" spacer cut and if anyone has a t3 inlet gasket for sale, let me know. I clearance some firewall some more so hopefully, we will still have room with the spacer.

Here she is though in there. Looks like the intake/charge pipe and down pipe should be relatively easy to route. Crossing my fingers 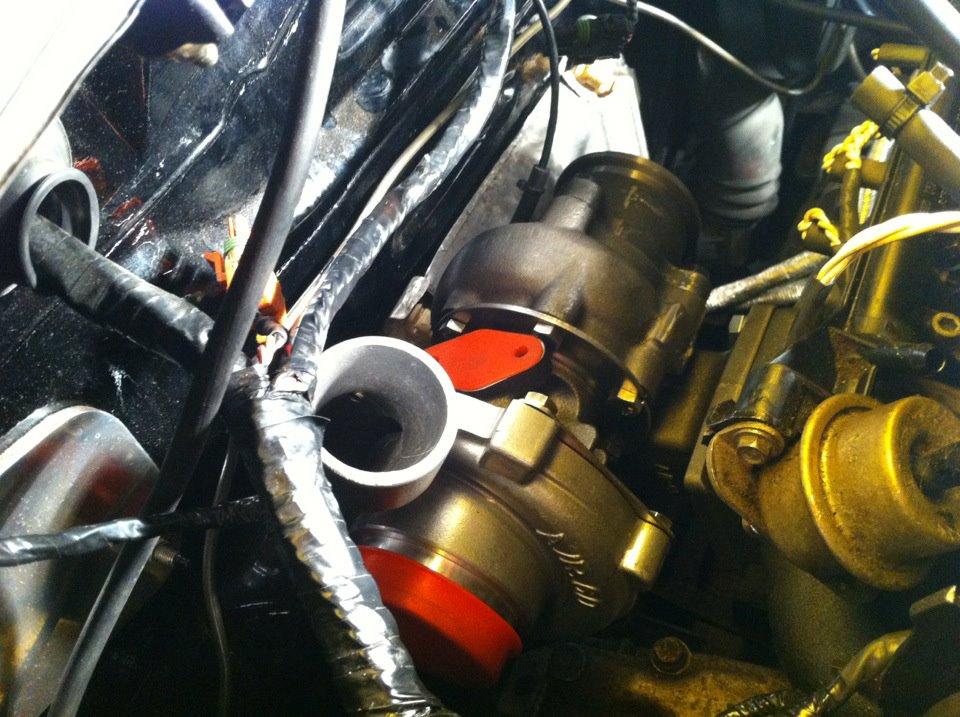 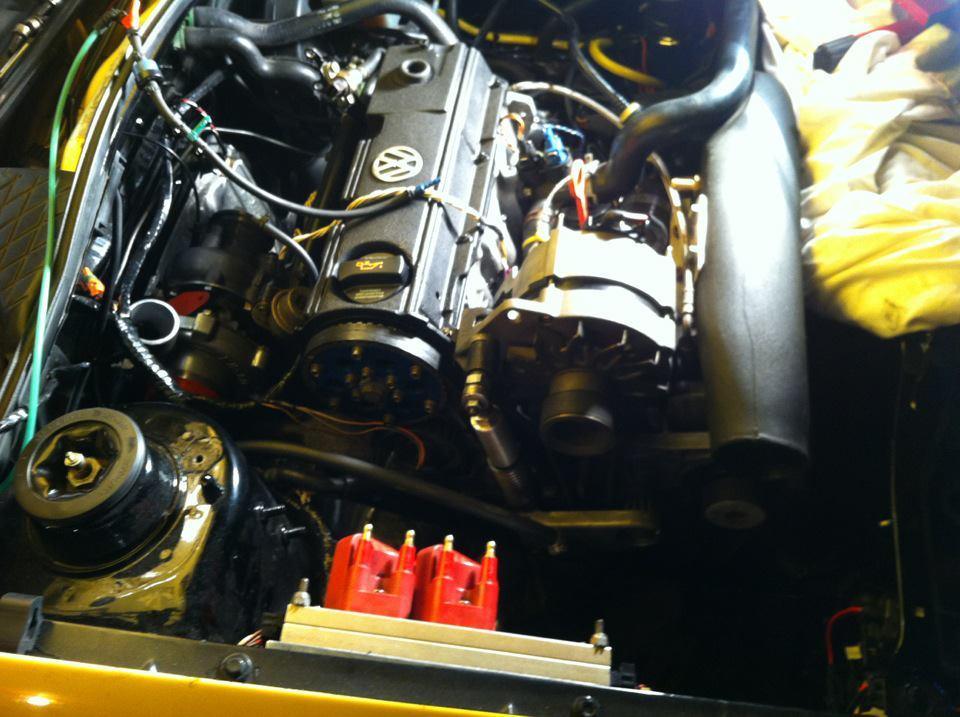 Well I didn't do too much on the car today. The mower broke last weekend and I was able to find a new motor for that so mower motor swap comes before corrado. Tabby was able to make me the spacer that I needed to hopefully clear the intake manifold. I'll try and test fit it tomorrow night. Here is the flange. 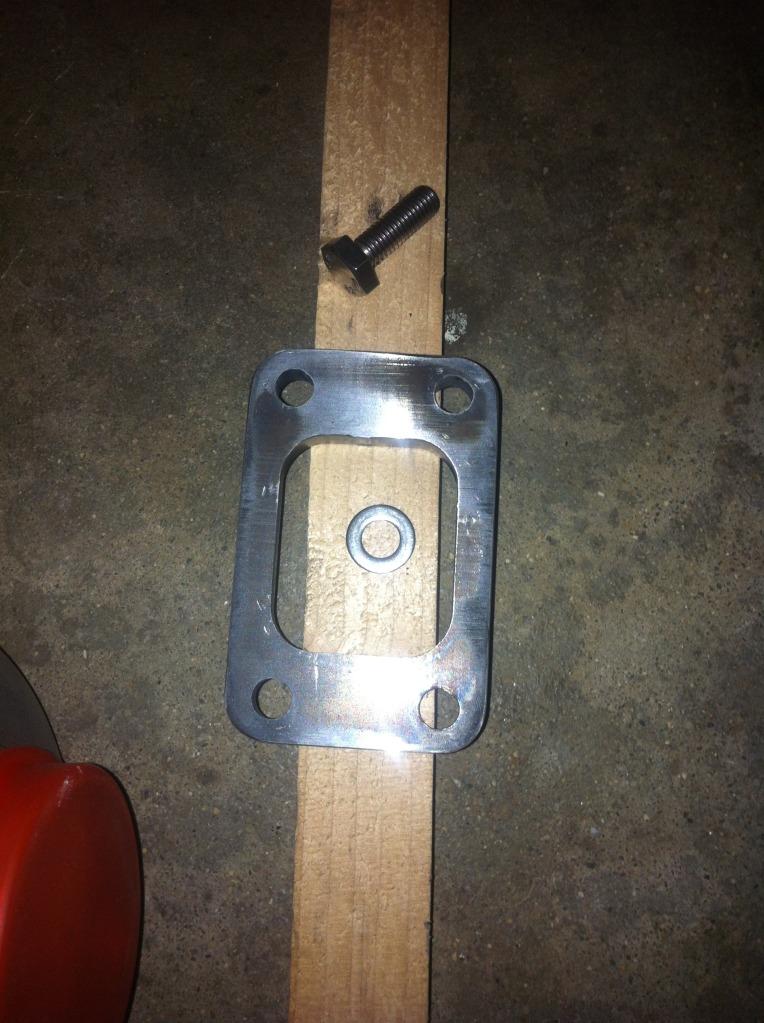 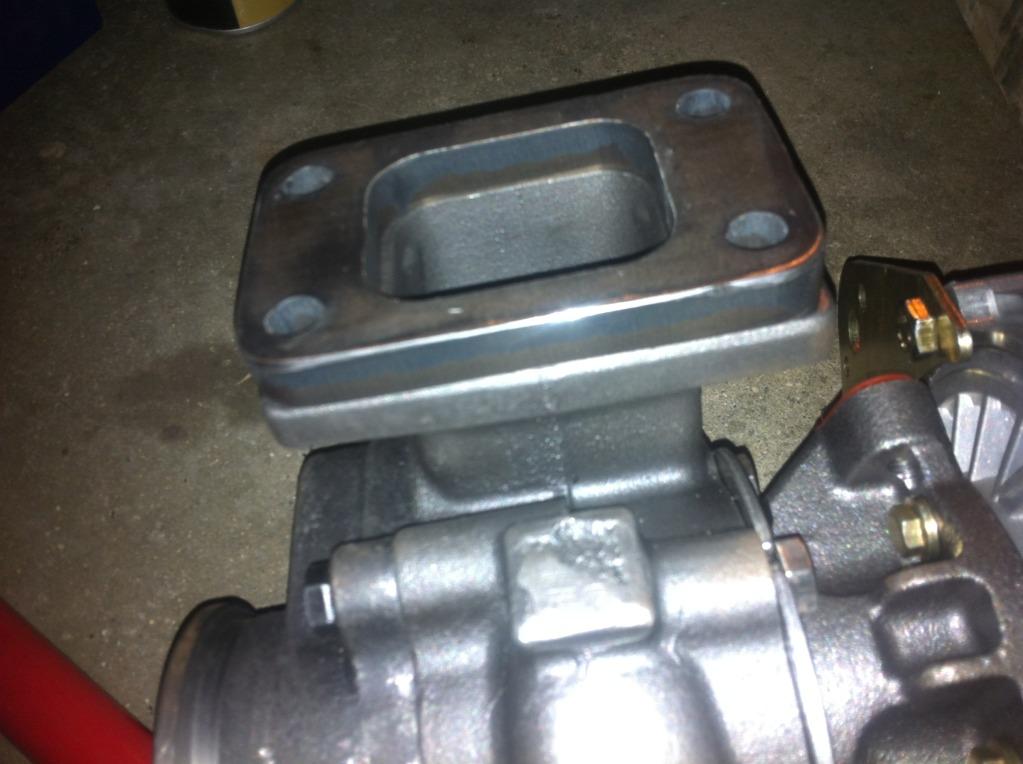 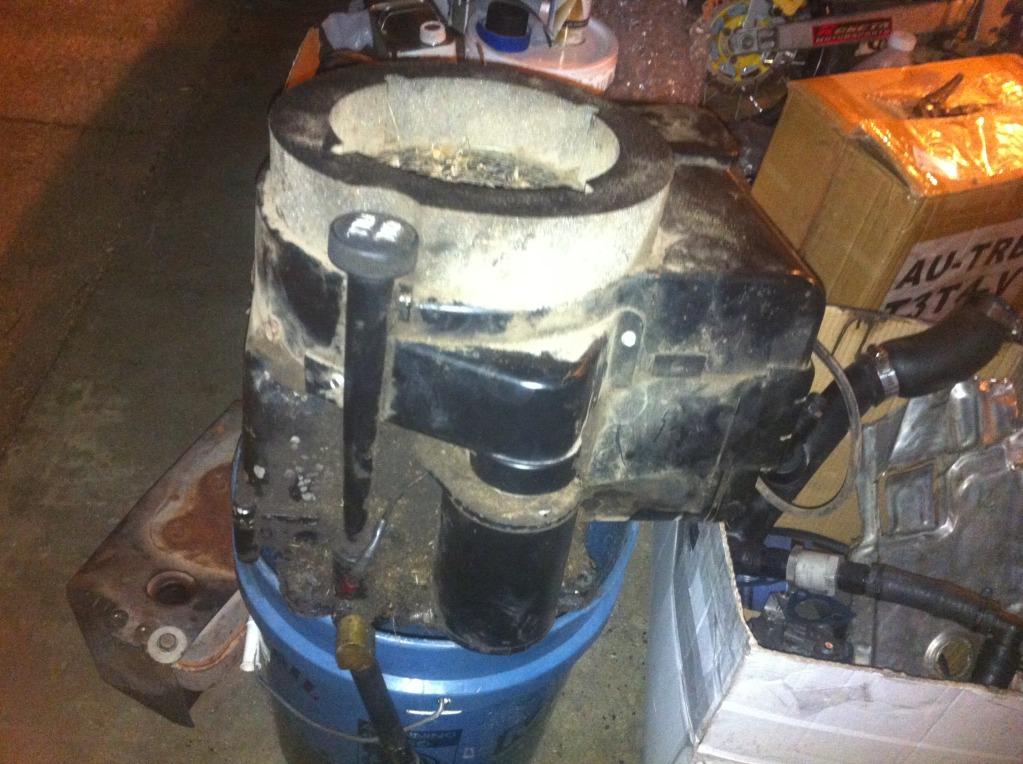 Here is the replacement. 20 HP B&S opposed twin. Figured some of you guys may like this swap. 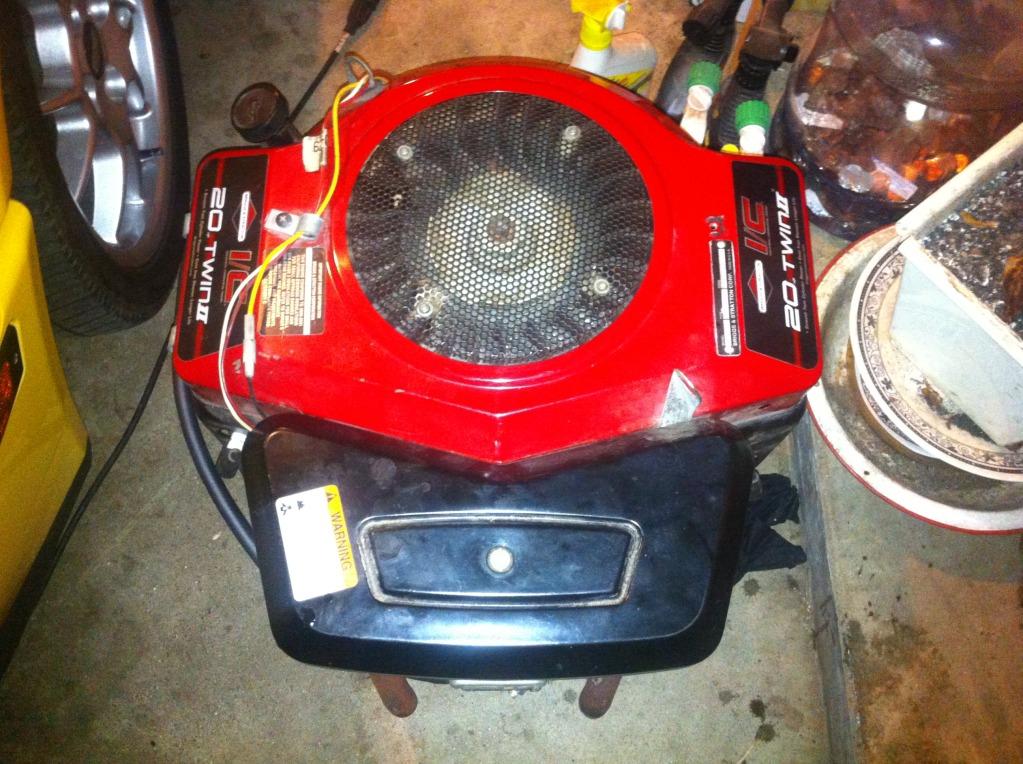 Boog, yes its turbo feeding super. The turbo has a lot more volume than the super does. There will be no bypass for the supercharger because I'm going to try this as a compound setup.

These are all numbers at the manifold. Now add in the turbo. It will full spool at about 4500 and make (wastage set to) 8 PSI. In theory, it will make max boot at 4500 (which i believe with my turbo to be about 35 psi) so it should start making boost at about 2-3k rpm.

The wastage will take its signal from the intake, so after supercharger. This should (and I REALLY hope it does) keep the wastage open most of the time because the supercharger makes 8 psi at such low RPM. The turbo will be nothing more than to create atmosphere at the inlet of the supercharger instead of vacuum.

I can't remember my turbo efficiency map for a 63 trim but let just say the turbo somehow is able to make the full 8 psi set by the wastage at 2k rpm. I will then have 20.37 psi of boost at 2k rpm. Obviously this can't happen because once the wastage sees manifold pressure above 8 psi, it will open and be nothing more than a bypass air restrictor. What I would then do is add a manual boost controller to set the wastage to 20 psi. Now the turbo will make boost until the compound pressure = 20 psi. Turbo pressure and supercharger pressure will always be inverse of each other but hopefully always totaling 20. This will also give me the option to increase pressure over the 20 with the manual boost controller on the turbo's waste gate.

I was worried about the smaller turbo not having enough volume at the top end to maintain the volume that the supercharger needed. This also lets me increase the boost up to almost 30 psi if I were going to in the future (which forged pistons and probably alcohol).

There is a fairly large front mount now that will stay between the charger and intake. IF needed I will do an air to water later.

If this works like I hope, I was going to get a smaller pulley for the supercharger to help slow it down. This should reduce heat and extend the life of the charger. The turbo will make up the difference.

More work on the mower and less on the Corrado. I test fit with the spacer and it just clears. Should work well though. Now time to fab the piping.

This is all I have for photos for now. 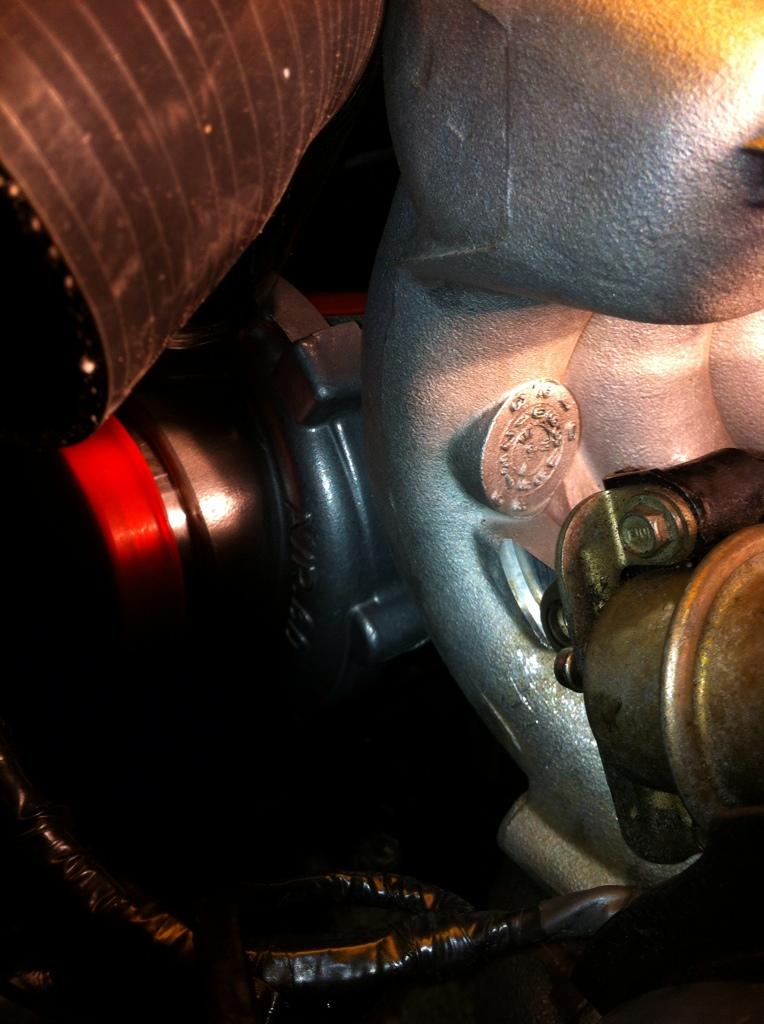 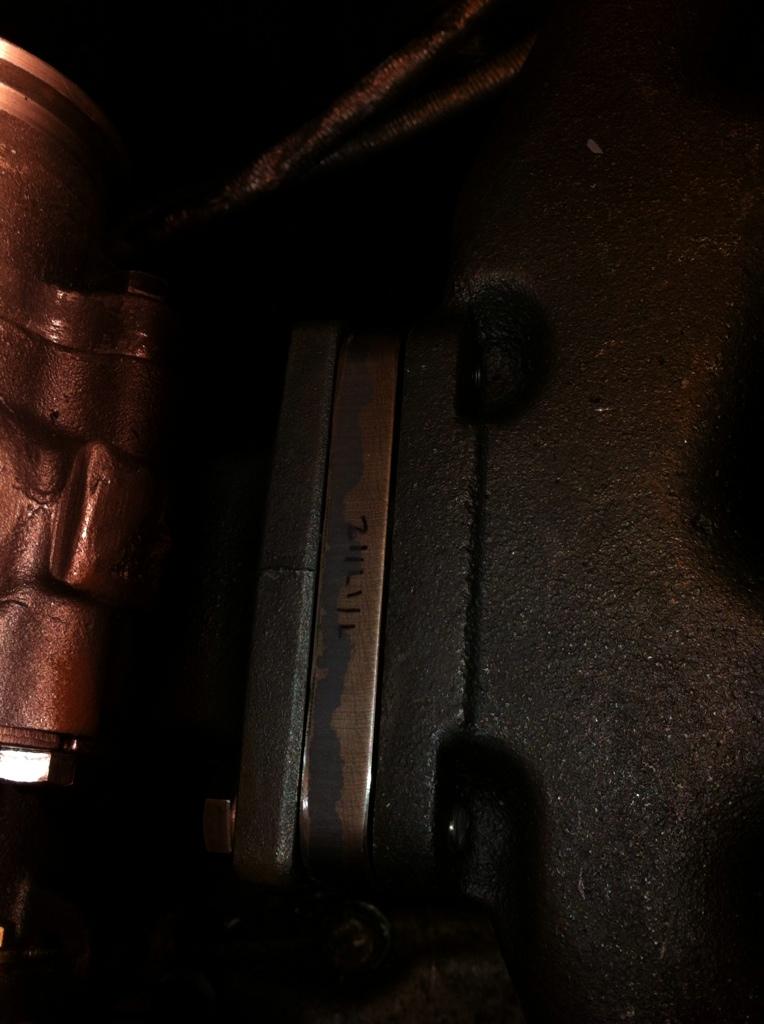 and this is what taking up my corrado time. Yes its dual open headers lol 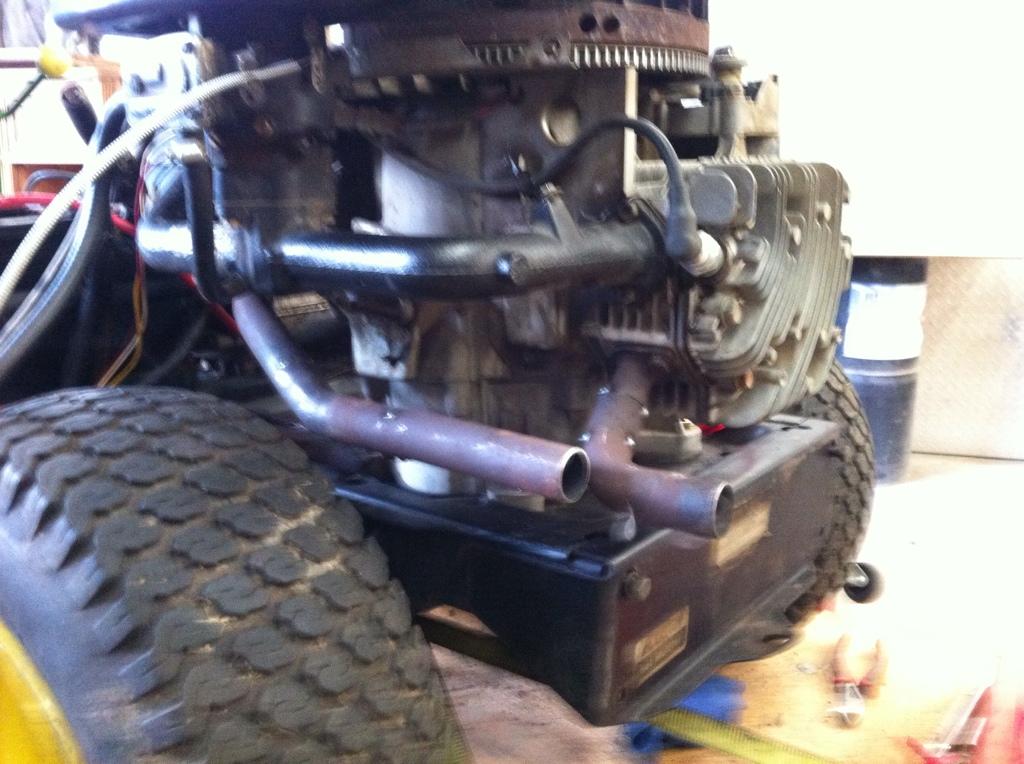 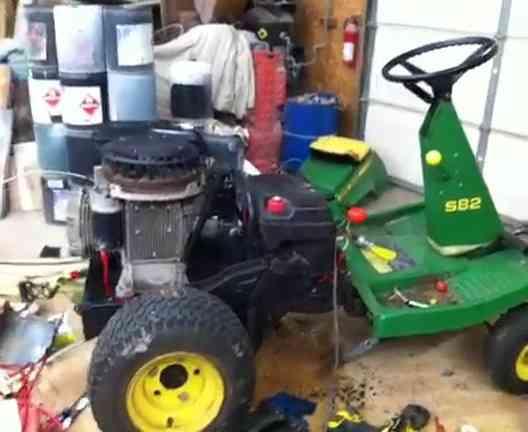 Well the mower is done, cut the front yard and it works well. Then did some needed work around the house and built a few things that I have been putting off. Needless to say, not much car time.

What I have been able to do in the last few days of updating this:

Cut 5/16" flange for down pipe to cat delete pipe, 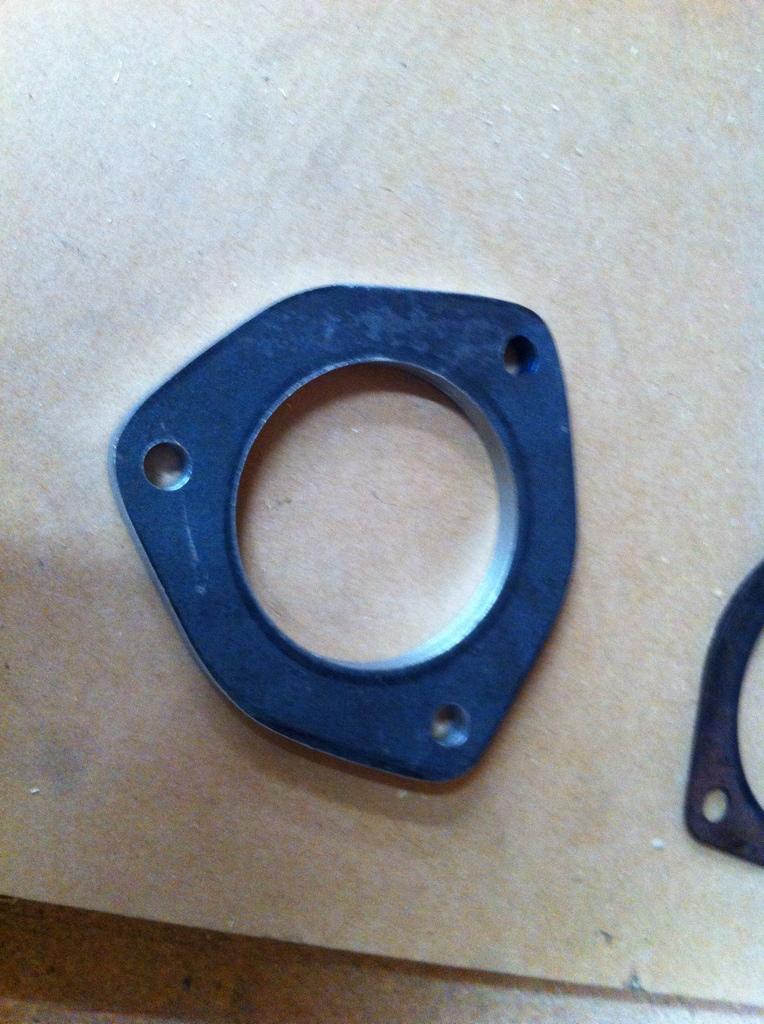 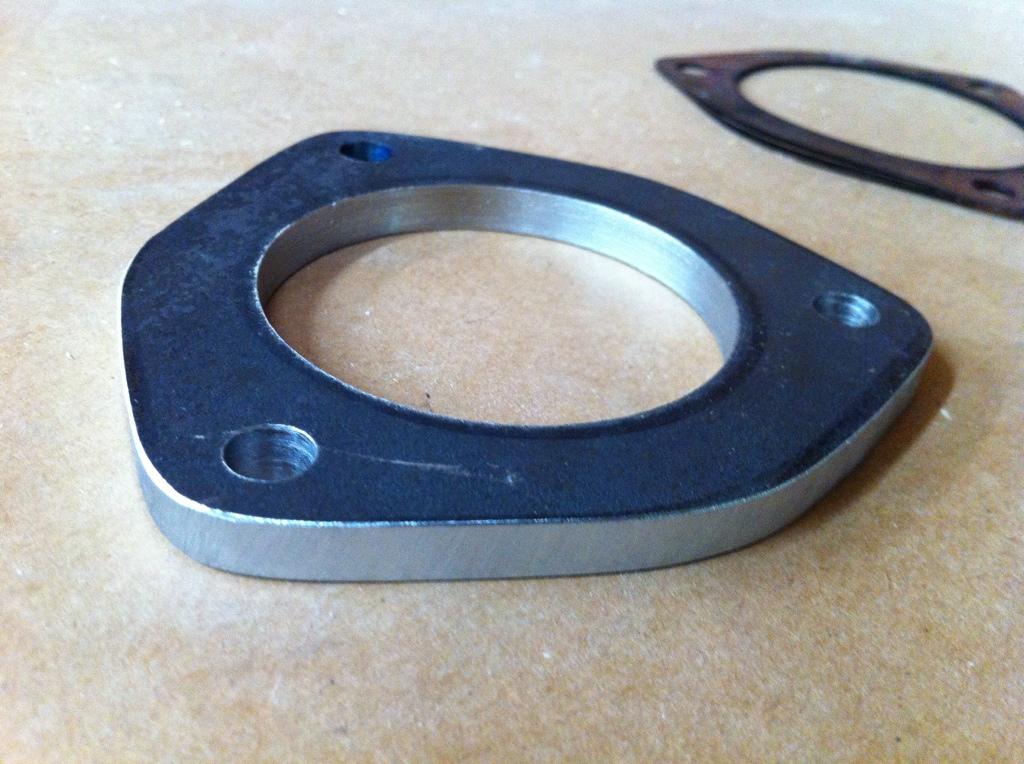 Did some heat protection on the fire wall, brake lines, and some wires that will be behind the turbo. 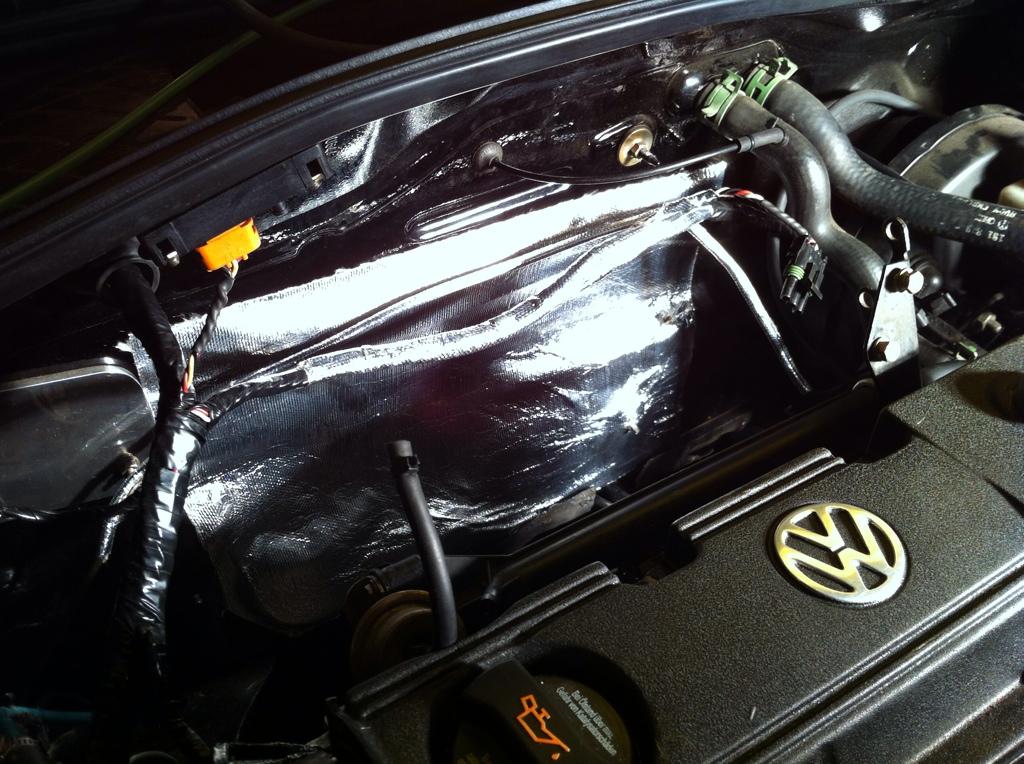 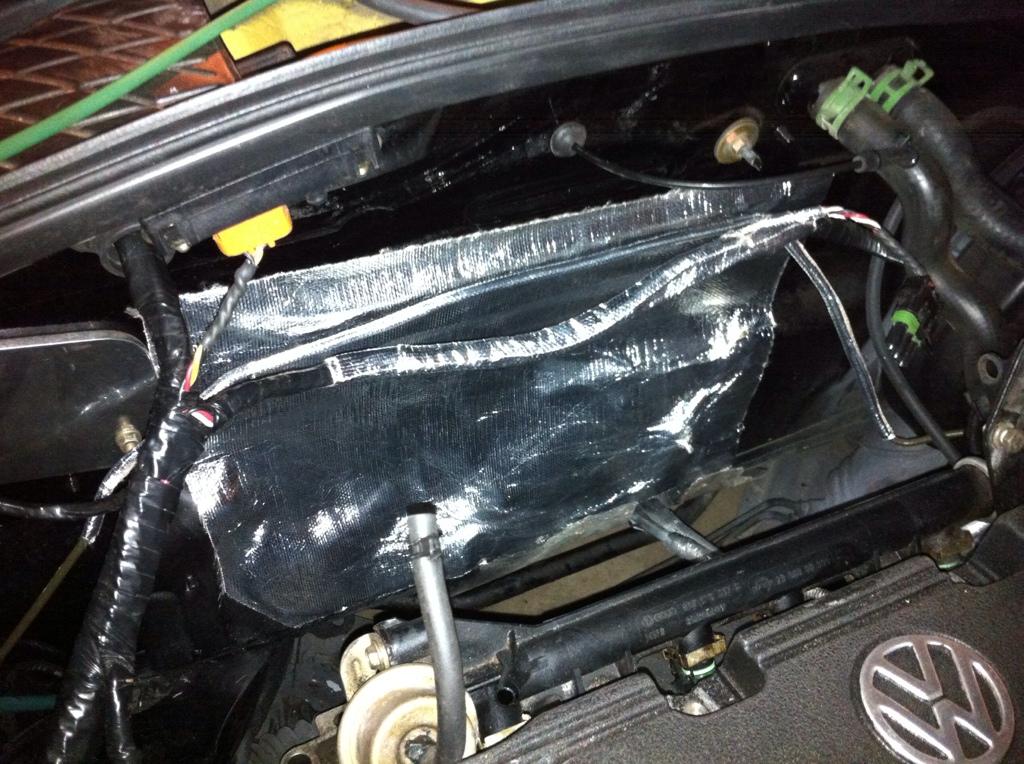 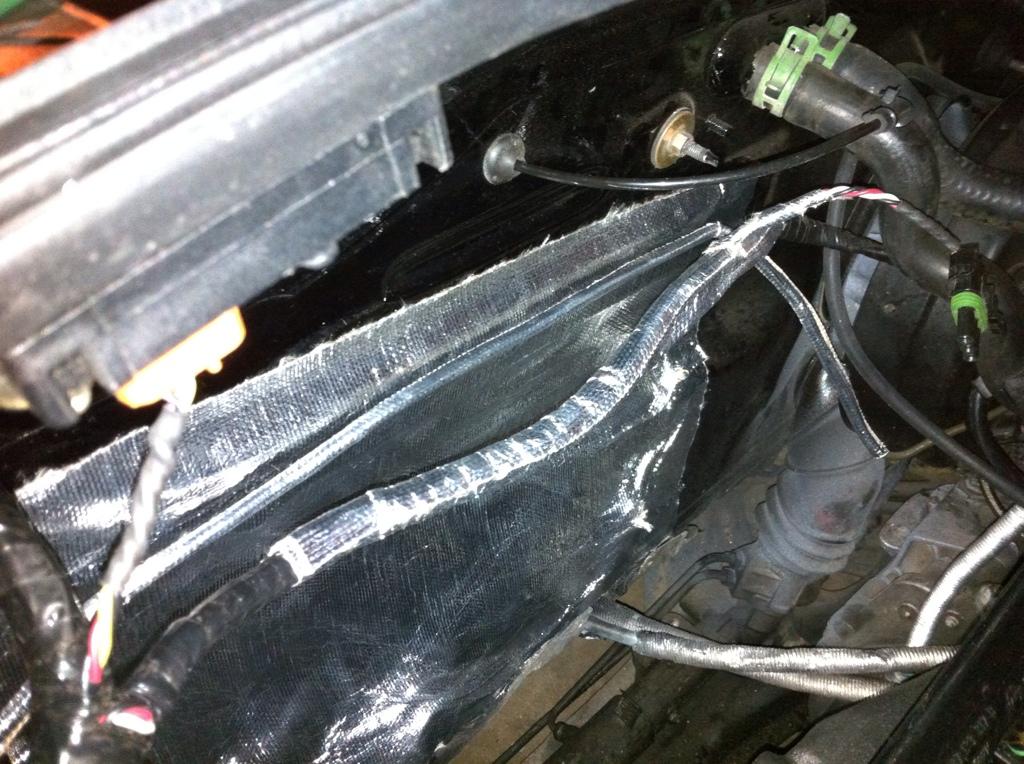 Then Jake stopped by last night to help out with building the down pipe. took us nearly 3 hours to build this damn thing. 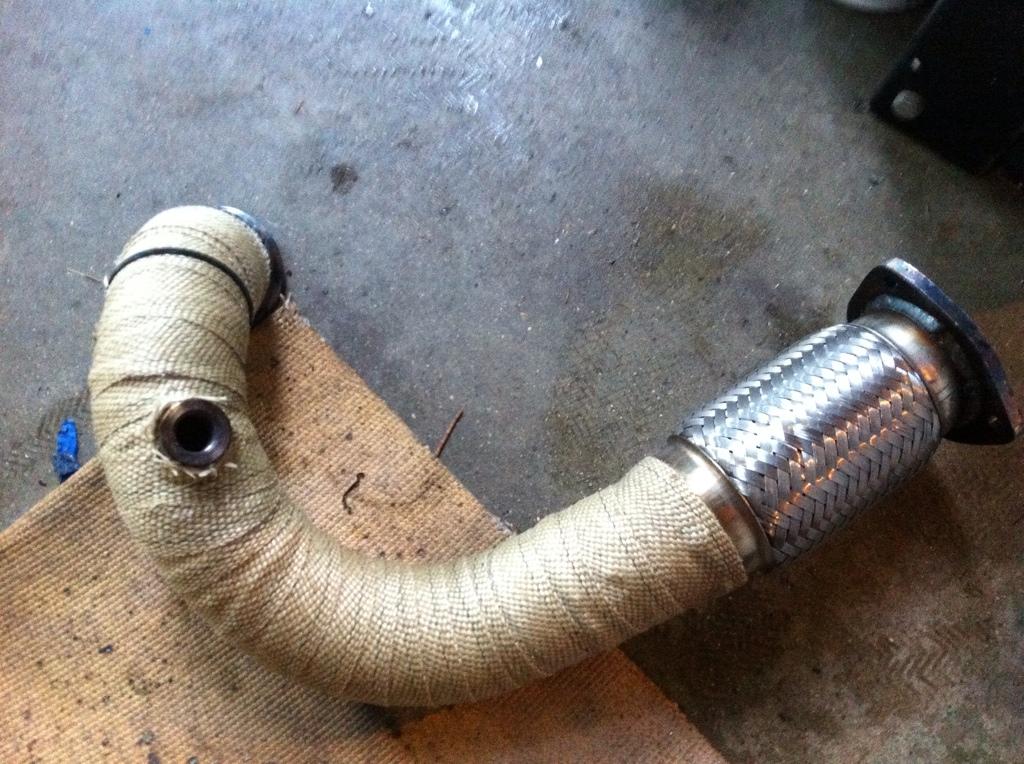 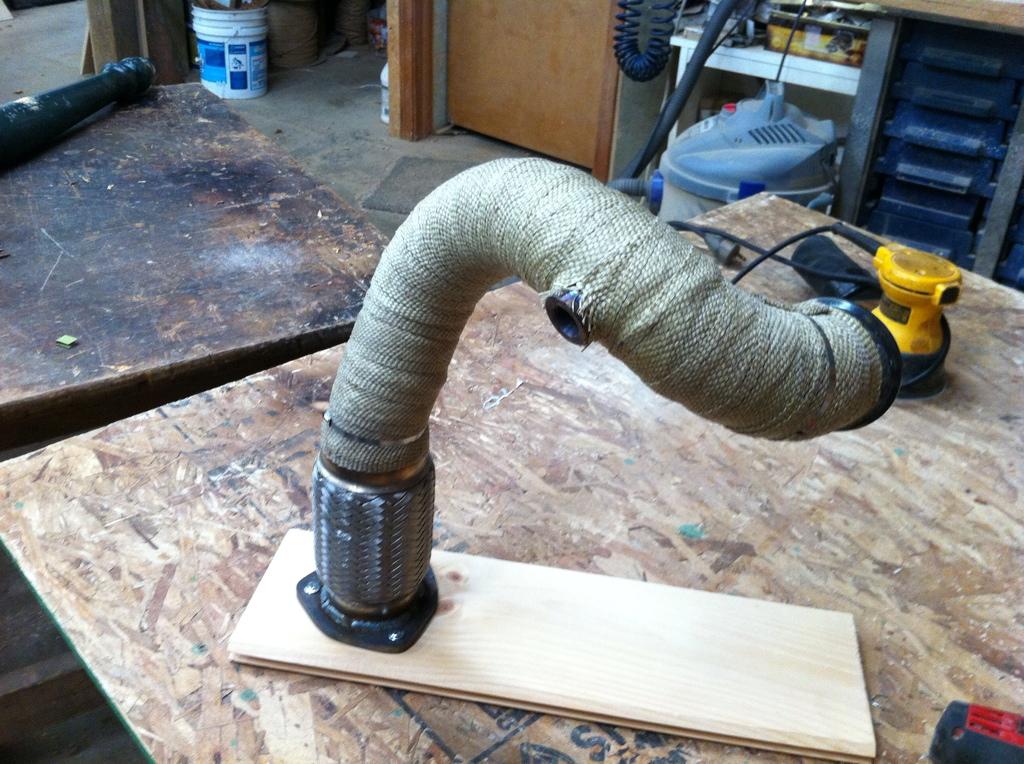 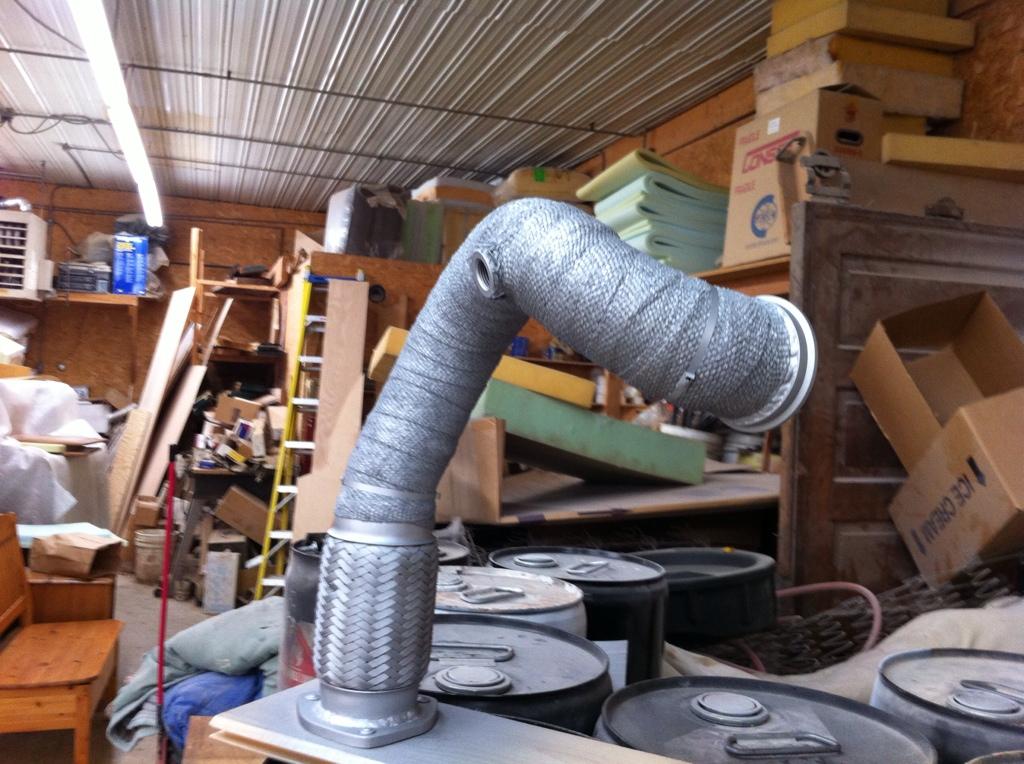 Next on the list is to do the intake piping, charge tubes from turbo to supercharger, oil feed and return lines. Then take it all apart again and put it back together with gaskets and hope it all works.

So last night while test fitting the intake I came across a problem. anyone that has worked on an 8V counterflow head knows the intake bolts are a bitch to get at. Well, now the turbo is blocking 2 of the damn bolts. F ME!!!!!

So some brain storming today and I figured it would try and use studs instead of bolts to secure the turbo to the manifold. This should give me an inch or so to push the turbo away from the intake and bolt that first, then tighten down the turbo. Well finding studs was not easy (unless I wanted to buy a pack of like 25 or so). Finally found a set that would work but had to cut them down a bit. Test fired the turbo with the studs in place and I just squeeze the turbo on the studs with it pushed on the firewall. So worst case, I drop the turbo down under the manifold first, then bolt on the intake, then wiggle the turbo up. Either way, it should work (cross fingers).

So with that problem solved, I moved on to the intake tube. 3" intake to the turbo. Basic, just cut some mandrel and weld it up. Then comes the charge pipe from the turbo to the supercharger. Again basic and easy (really glad something is easy with this project). 2.5" tube from turbo to super. Here are the pics of the tubing. 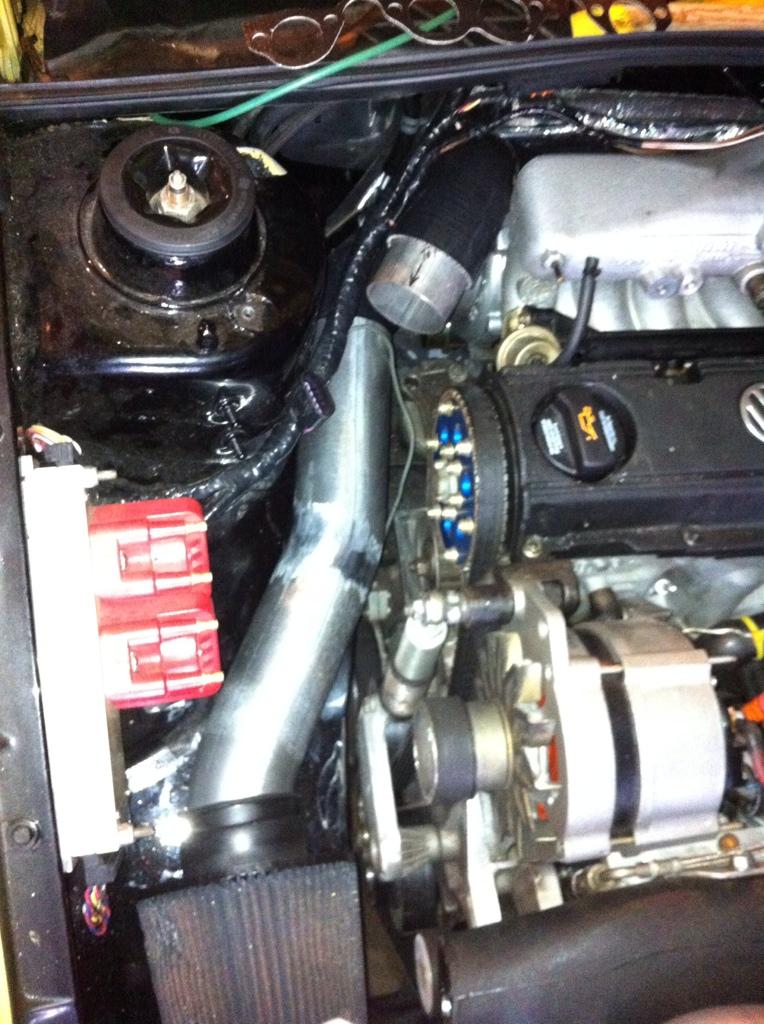 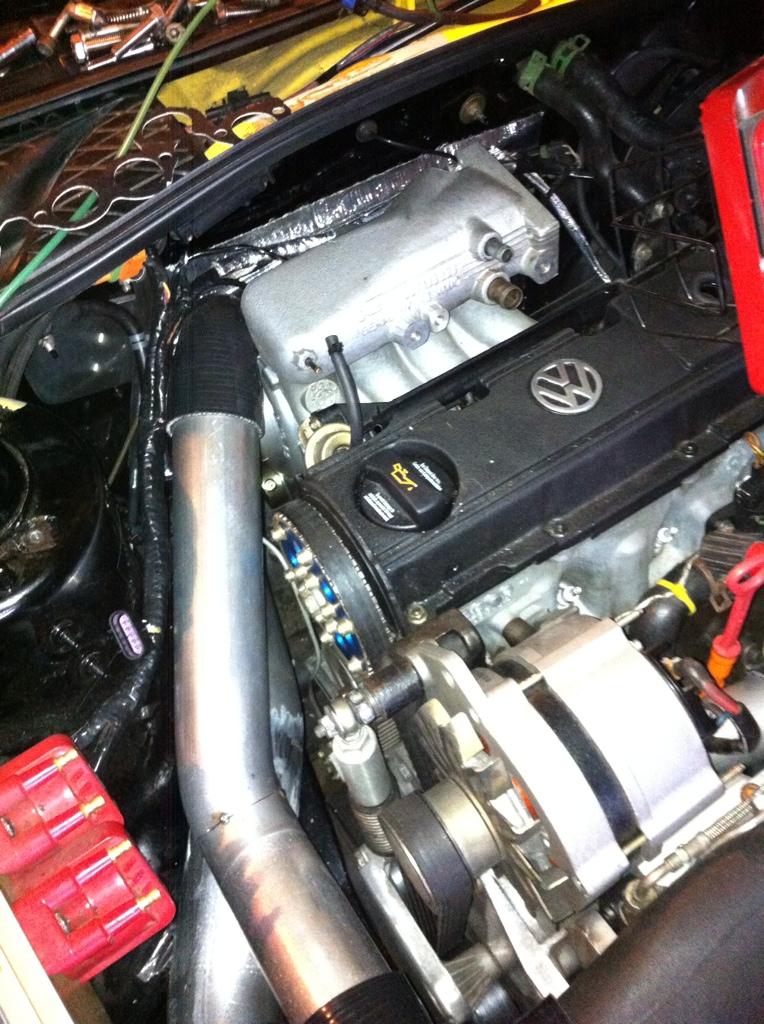 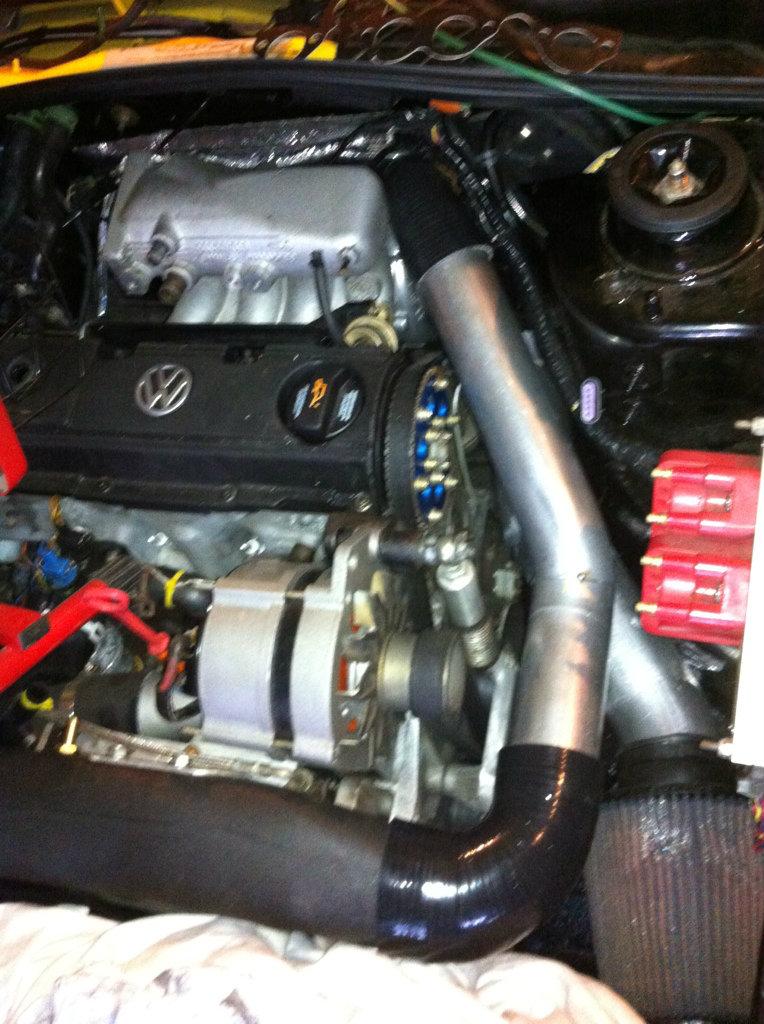 Next is the boost bypass tube from the TB back to the pre-turbo intake. I was able to get some 1.5" radiator hose with bends that I hope to be able to make work.

Thats all for now.

Well for future reference with anyone trying to use the CXracing 8v turbo manifold with a corrado 8v intake. It don't quite fit. There will some grinding to either the intake or the turbo manifold that needs to be done. I didn't get any pics because I was trying to hurry before work this morning. Basically the three long bolt holes on the intake are too thick and will contact the turbo manifold. Guess when I was test fitting, I was just looking to see if it was flat agents the head, not if the holes lines up (can't see from the front). An extra head would probable have been helpful at this time but oh well. Took off about 1/32" on each of the three bolt hole casting on the intake manifold and it clears well. Still plenty of material for the Manifold. I'll snap some pics when I pull it off again.

Was also able to make some 1.5" radiator hose work as a boost return hose. about $15 each for some pre-bent sections of reinforced high temp hose. I just went back to the back where they had all their hoses and picked two of the longest with the most funky bends LOL. Will get pics up later for these too. Hopefully if all goes well, I'll be able to have this on a final assembly by this weekend. Still have one more hose coupler coming Monday so not drivable until maybe next week. I'm sure there will be some tweaking for a while after that as well.

Tonight we ran the boost return line back to the 3" inlet pipe. The heater hose works great. 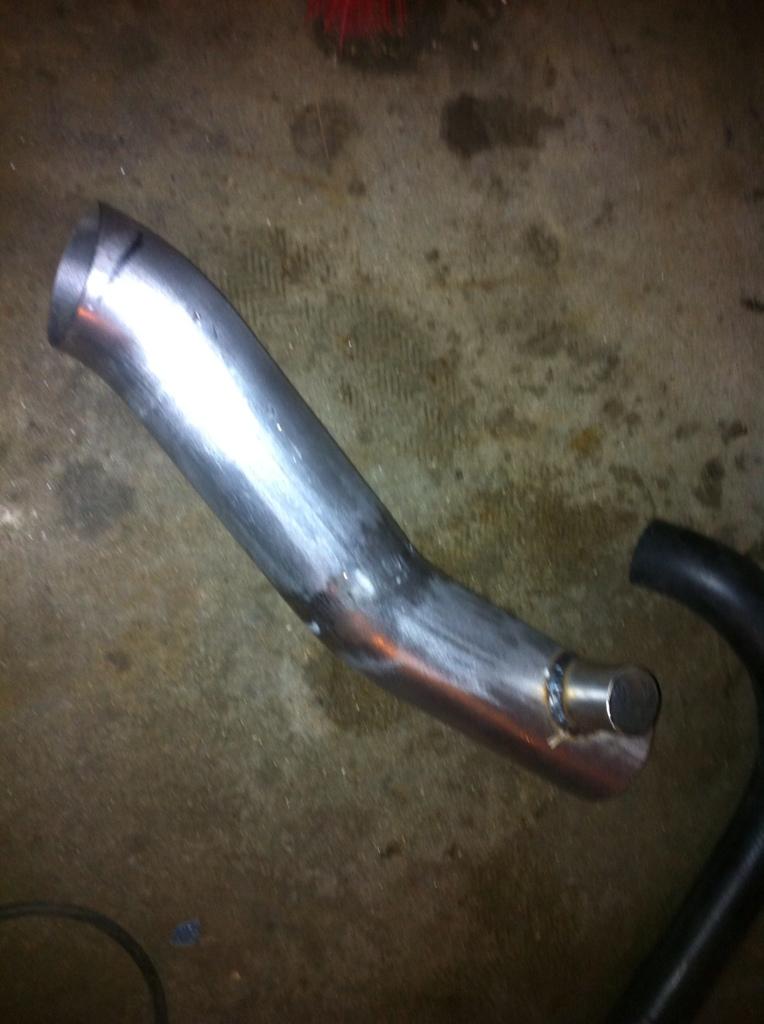 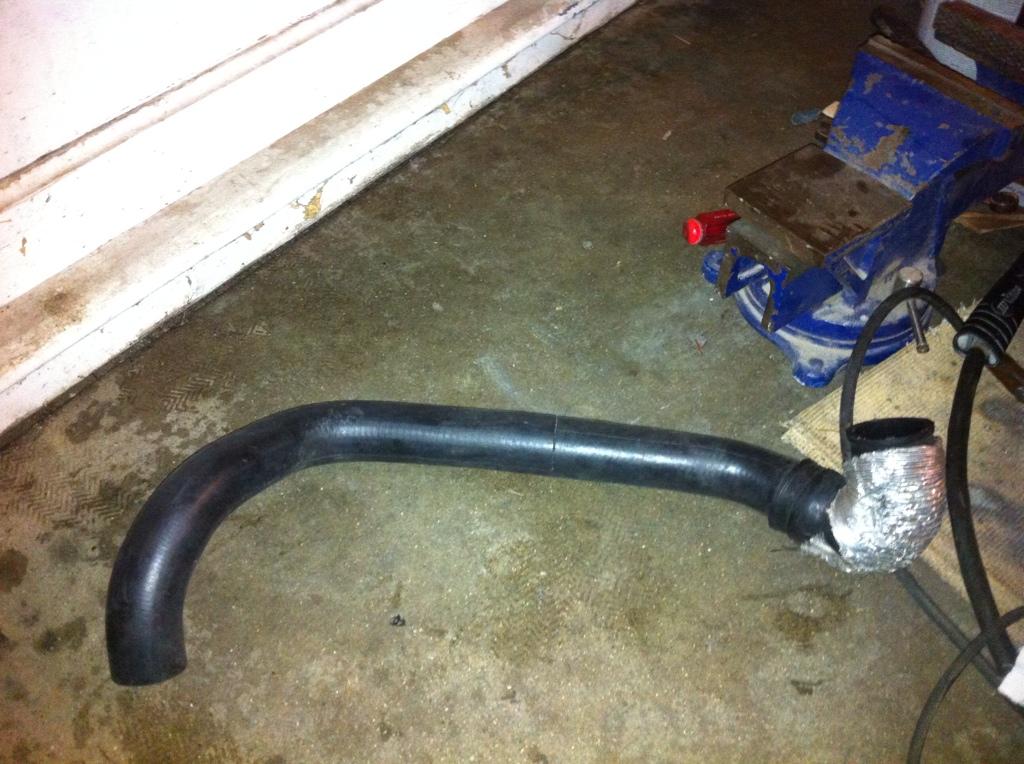 Interesting build! I admire your ambition. Glad to see you got it working