So, my old 745t's original engine has almost 200k on it and really sounds like a diesel at idle, especially when cold. Put the word out that I was looking for a replacement/rebuilder engine to one of my customers who deals specifically with old RWD Volvos. Says he has a rebuilt B230FT with about 20k miles on it, unsure of year but knows it's not a squirter block. Price was right (get it out of here, pay me when you can) so I took a chance on it.

Looks fairly clean for what I want to do. I plan on cleaning it up, paint, new hardware where needed. 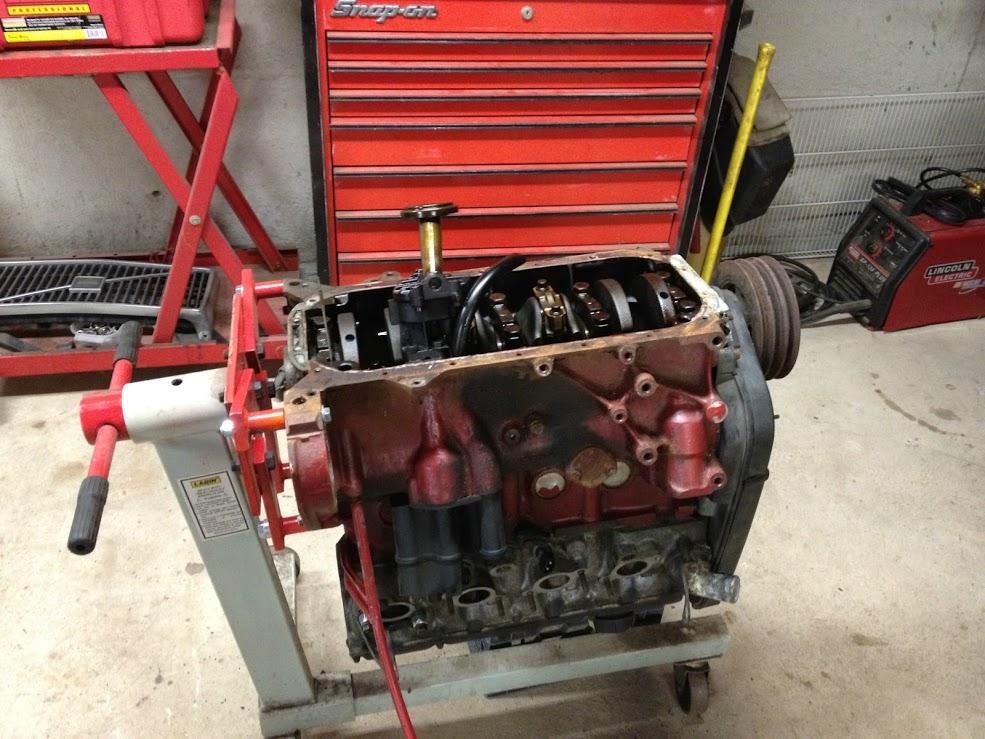 Cheesy freeze plug repair. I have a correct replacement for it. 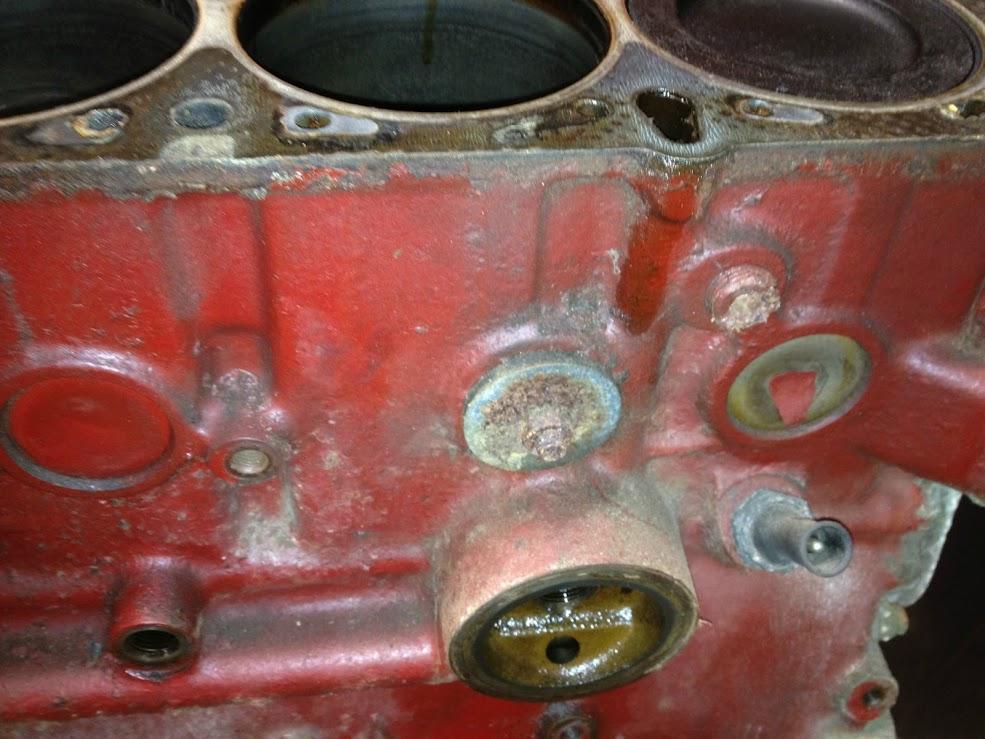 2 broken off exh mani studs in the head. Currently working on removing the rest with heat and PB Blaster. Open to suggestions on these 2 suckers though. 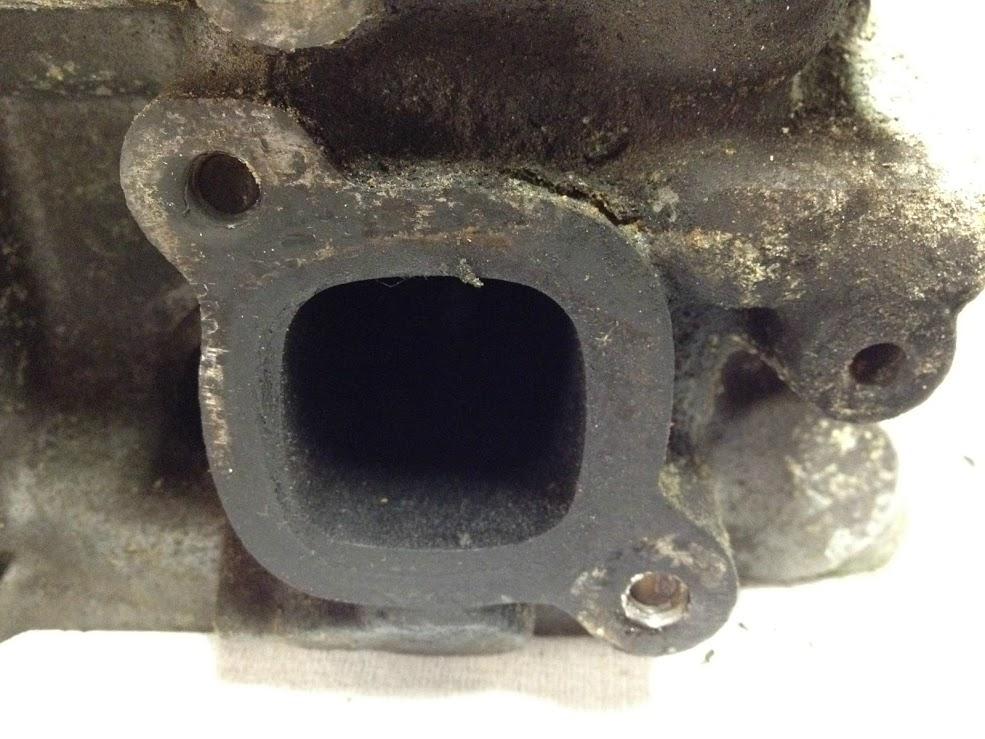 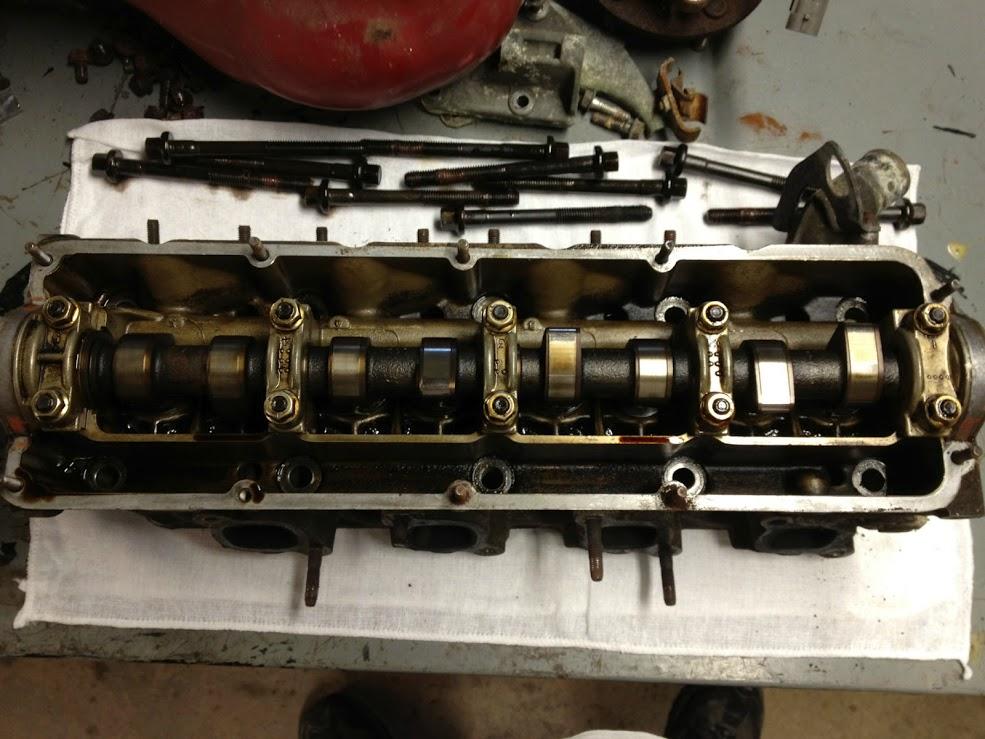 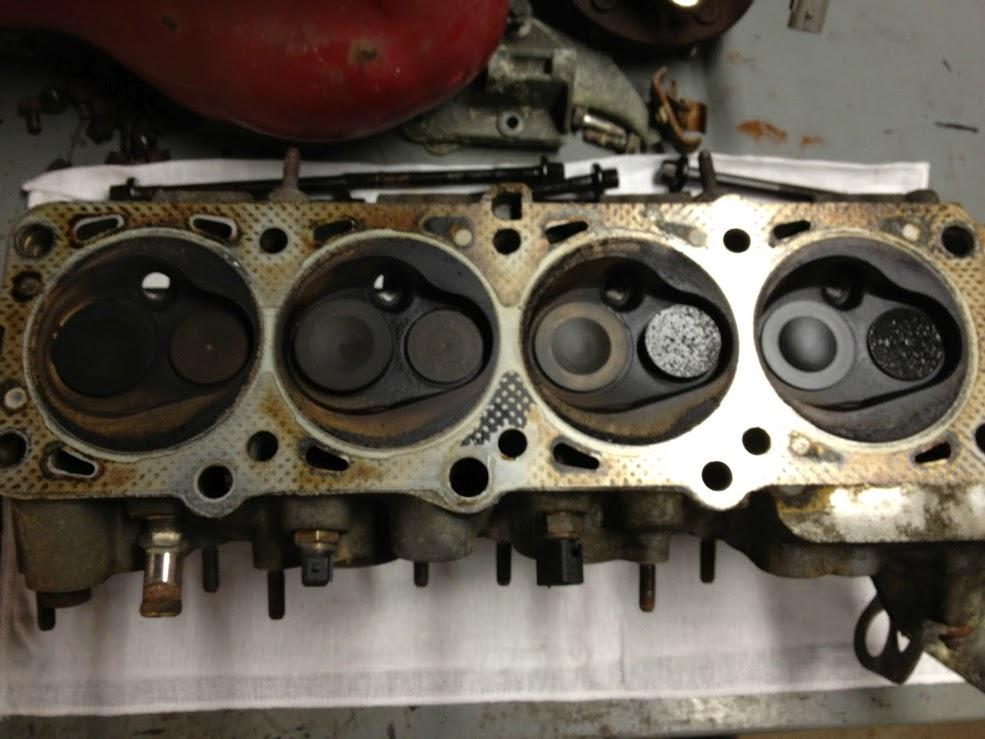 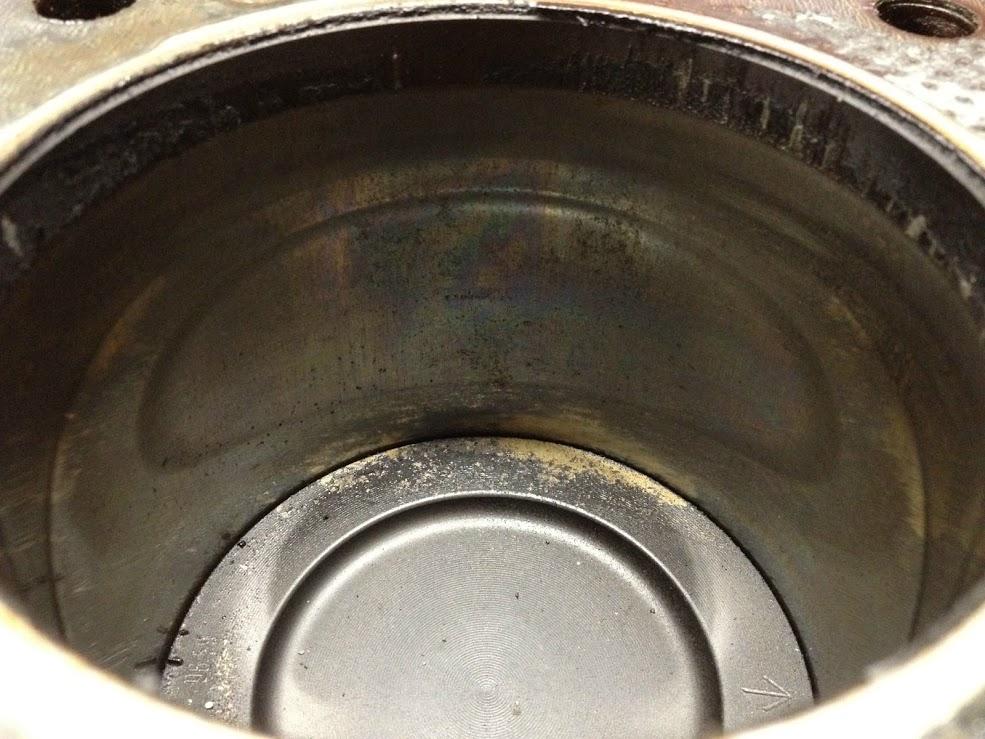 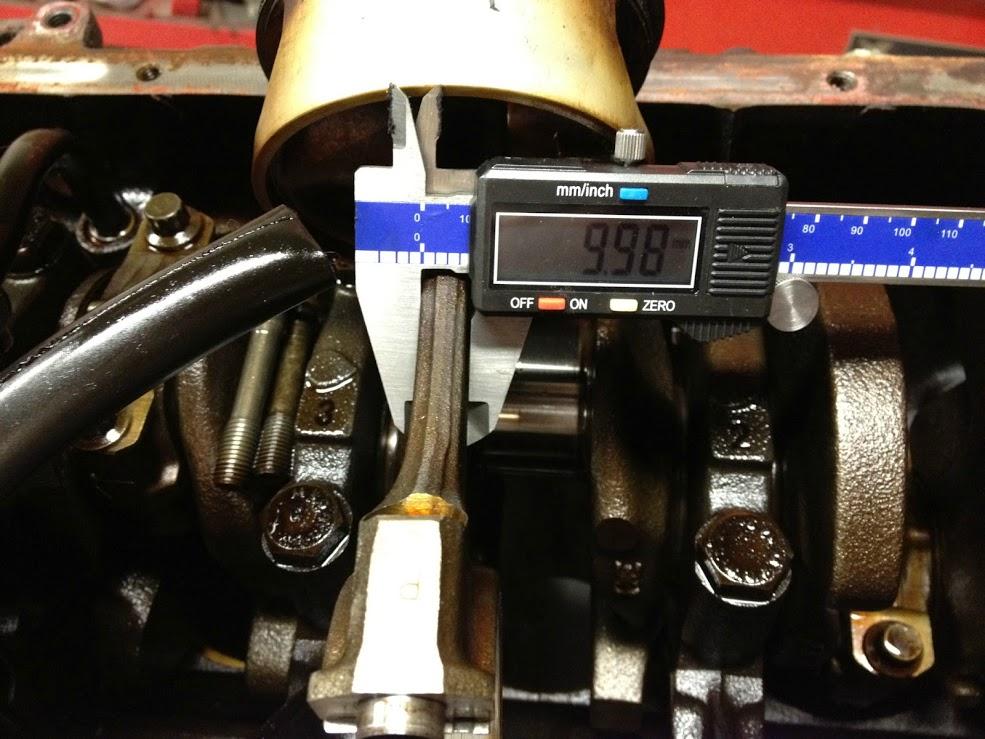 Now, he did call me yesterday and said he had an NA squirter short block that was going in the scrap pile. Do the later NA engines use the thicker rods? And are they a straight up replacement for the Turbo rods? If I can just go get the rods from the short block and swap them onto these pistons that would make this a whole lot easier to deal with.

Well, there are a couple people here running 12s with stock big rod short blocks. Are they on borrowed time? This car is primarily daily driver, errand runner, child transport, grocery getter. It may see a couple trips to the dragstrip in a year, and that's estimating high. It's a 1.5 hour drive to get there not including Boston traffic. I do lean on the happy pedal a bit much at times but only to get to appropriate speed. Or to bewilder the guy in the next lane.

I did manage to get the rest of the exhaust studs out of the head, except the broken ones. Tried welding some material in there and a nut on the end. I think the aluminum head is just wicking away all the heat from the weld cause it just keeps breaking off at the stud = not good penetration. Guess it's time to start drilling.

Talked to the guy with the short block today. It's a 95 NA block that he is keeping the head and oil pan, I can have the rest. That should get me the thick rods and possibly a thick oil pump, as well as a squirter block to play with in the future. Although, with that said, if I get any deeper into these cars there would be a 5cyl swap rather than any serious money spent on an old redblock.

More seriously, this car isn't forever. I'm only playing with it because I haven't built a car in a long time, been into 4x4s for the last 7 years or so. Parts for this car come up so cheap sometimes that it's hard to leave it alone. I can't leave anything alone anyways. Because stock sux. If I can build this engine as cheap and easily as possible and get close to that power number I'll be happy....... for a little while. After that I can decide if I will stay with another 700/900 (240s not an option for me) and build something else like an all out 16v redblock or whiteblock swap or V8.

Various kinds of easy outs were not budging the broken studs from the head. More careful drilling and increasing drill bit sizes eventually had the studs out. With enough good threads left in the head for some new, longer studs. Procured new studs from work (dealer) that are used in a newer car application. These particular studs are threaded all the way down which is why I sought them out (edit: fully threaded studs are Volvo part #982667). New, stock replacement part #953049 studs are being used for the rest of the ports. 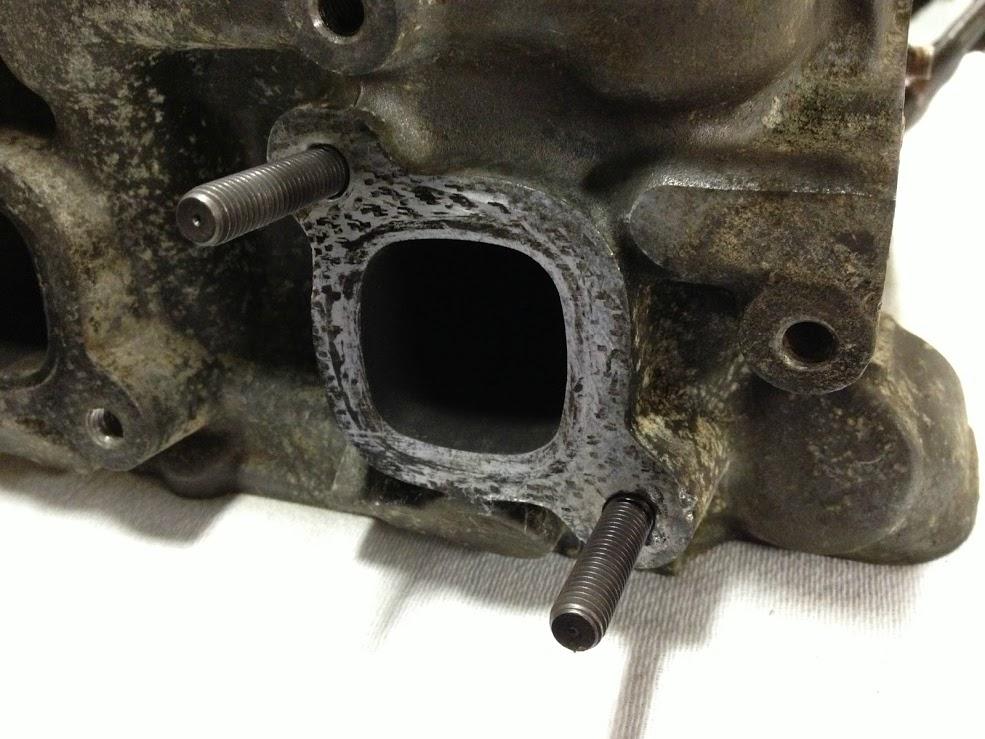 Effectively swapped the skinny rods for the thick rods. That was easy. 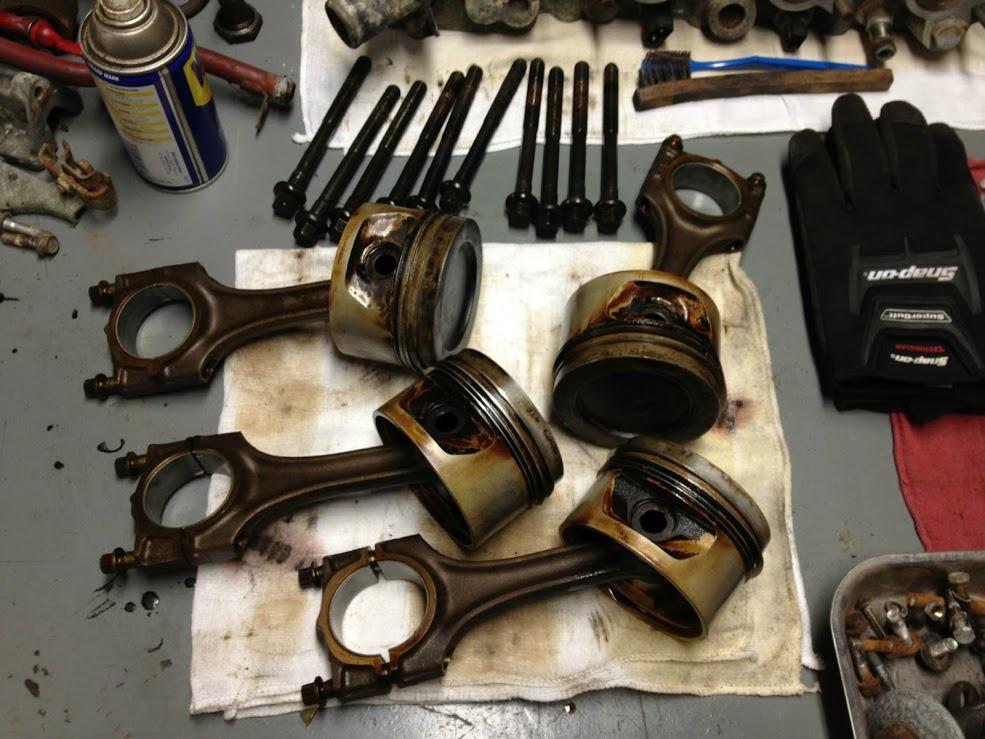 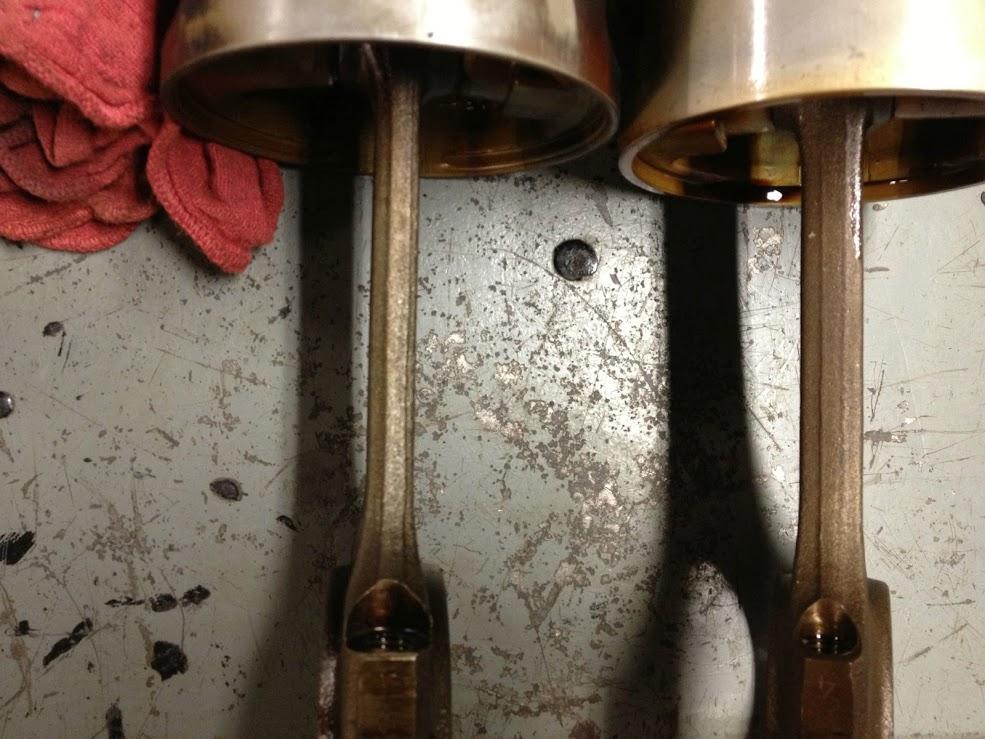 Brought the block outside and hit it with degreaser and some scrubbing and then the hose. All I could think of was the scene in First Blood where they are hosing Rambo down, is it weird if I call this engine "John Rambo" ? Blown dry with compressed air and then hit the vulnerable spots with WD40. 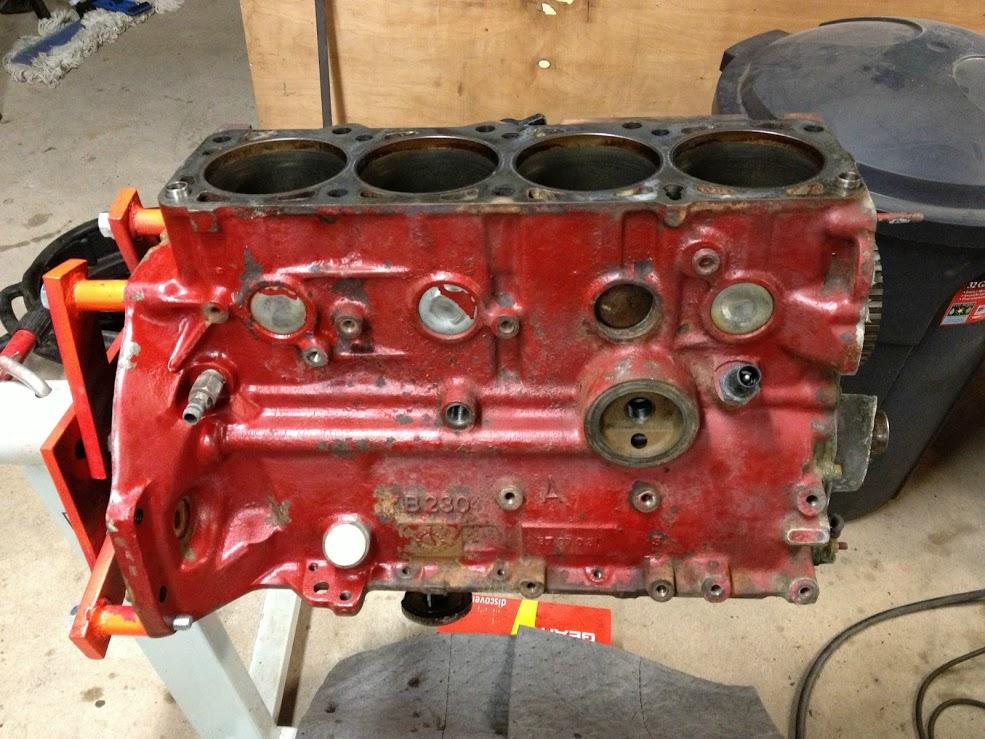 It's all clean. Needs tidying up and then I can get some fresh paint on it. 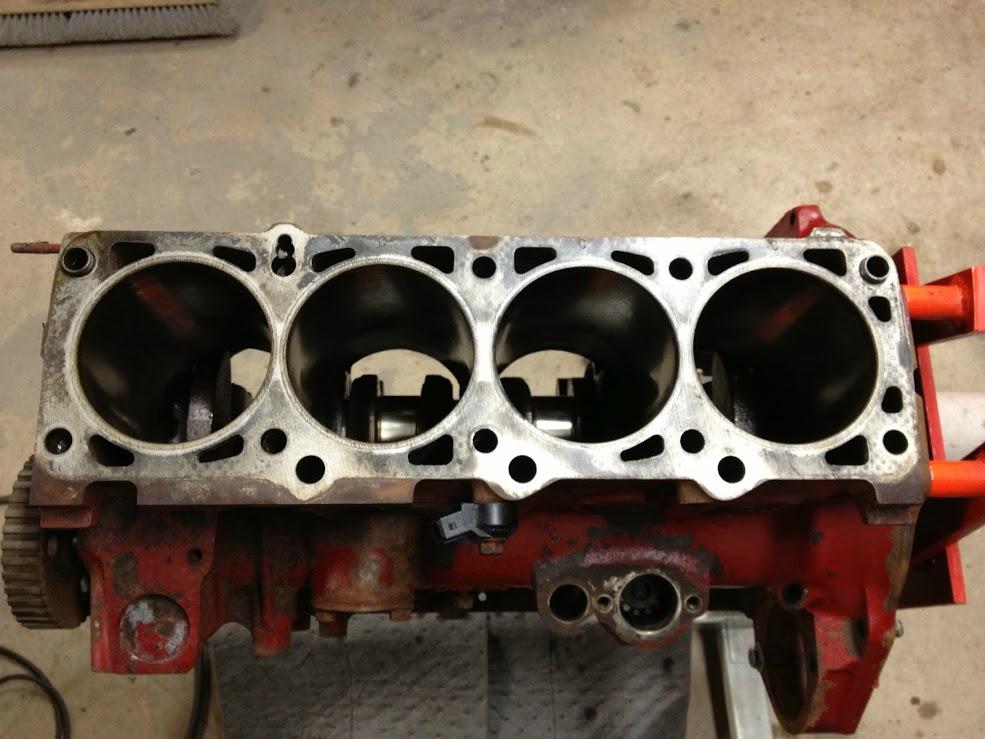 Any engine builders out there, chime in on this one. I have a new freeze plug for this hole. Is there any sealer or something I should apply when I install it? 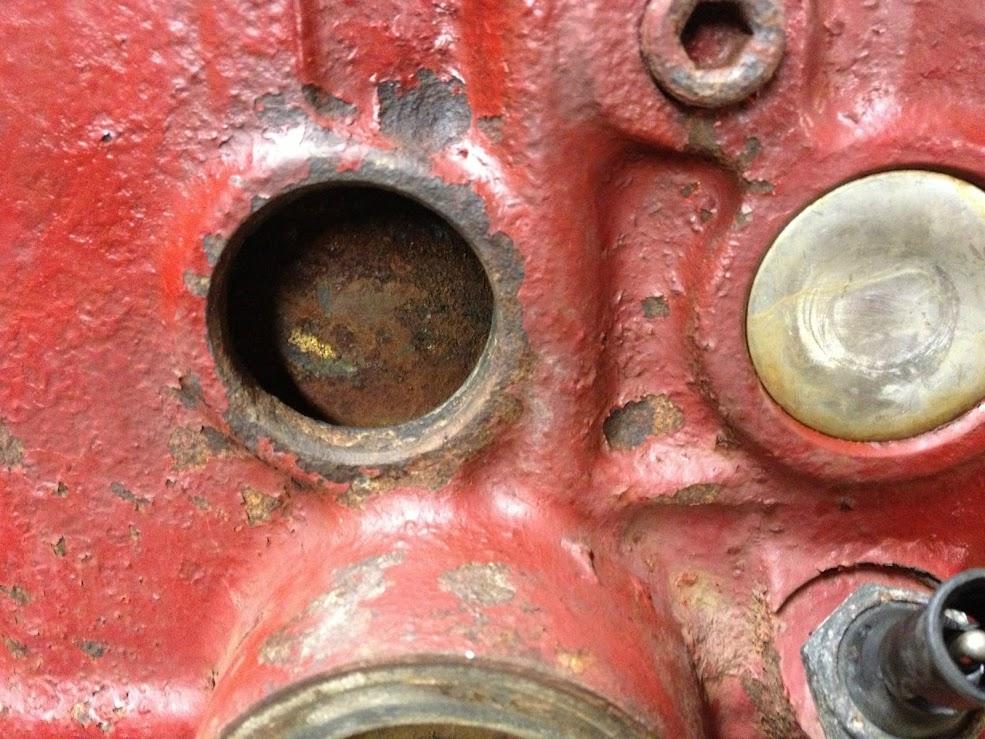 Turns out the NA short block was a low mileage Volvo reman unit (according to the guy I got it from). He got tired of saving it and tripping over it. So, if one is a local rebuild and the other a Volvo reman there may be bore sizing differences. I need to grab a book from work and look up specs. As it stands right now it is cheaper/easier/faster to swap the rods to the T block, which I have done. I don't have the tools to drill/tap/machine the NA block for the turbo oil feed and return. For now I will be holding on to the NA block for a possible future build with proper rods and pistons and maybe a 16v head.

At this point the engine in my car is so noisy I have non-car guys asking me if it's a diesel. It's so loud I can hear it while driving after it's all warmed up. It used to quiet down, now, not so much. So, head porting and bigger cam will have to wait. I will port the exhaust manifold and turbo hot side during the swap though.

I apologize for the lack of updates and in my haste of getting it back together, lack of assembly pics. But in the last few weeks while I was buying gaskets, parts and hardware I was also cleaning and painting. It's actually looking real good, starting to look like an engine again. 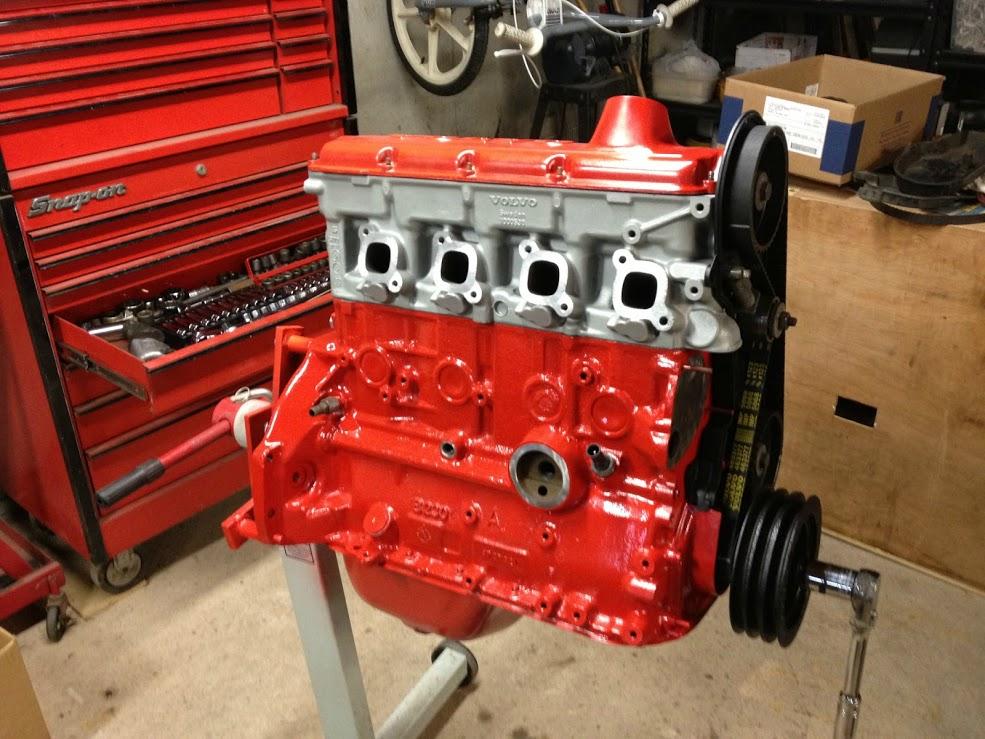 I've also begun cleaning the engine bay as I can't stand to think of this nice clean engine being dumped into the nastiness that is under my hood. Plus, when swap time comes, having everything clean will make the whole job a bit easier to deal with.

For anyone who cares, I got it swapped out this week. I have a build thread in the showroom-projects section. 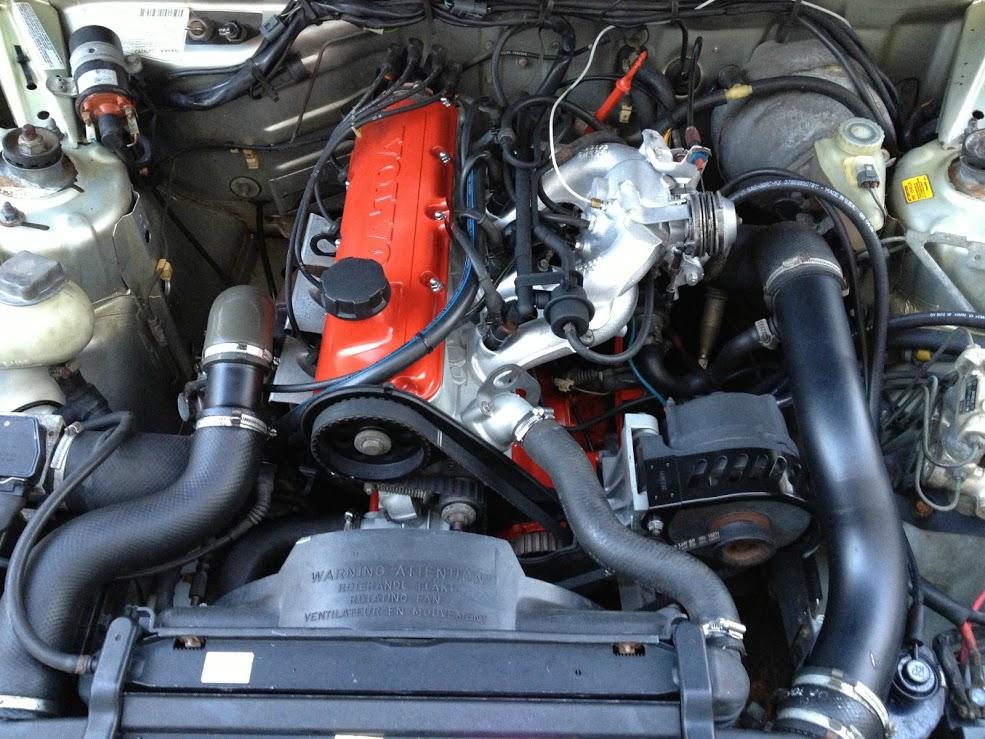 What I can say is that this new engine runs so much better. My butt dyno tells me it accelerates better, the turbo spools up faster and hits harder, the engine pulls better at the upper end of the RPM range (continues to pull instead of just getting louder).

Without having an actual dyno session, guesstimates mean nothing. My educated guess tells me the new engine was worth another 20hp easily, what the slappy original was making is anyones guess. Anyone running a slappy bottom end must be losing out on a bit of hp from all that blow by which equates to loss of compression. Rebuild or swap in a good bottom end and see what I mean.