This is a how-to for 99+ P80 cars - meaning they have coils and plugs instead of the distributor cap. Check out the linked video, or continue reading if you prefer written instructions.

1) Start by removing everything thats in your way of accessing the engine - airbox and charge pipe
2) The upper mount blocks the exhaust cam seal. The upper horizontal bolt is held in with a 15 and 13mm.
3) The vertical bolts holding the mount to the engine are all 14mm. There are different length bolts! The longer ones go towards the center of the engine, the short ones go on the edge of the engine.
4) There's another portion of the mount that's blocked by the bracket that holds your vacuum lines. There are 2 12mm bolts holding that bracket on. Once the bracket is off, there are 3 more 14mm bolts to remove. That piece is also sitting on a pin, so it won't fall off the side of the engine, you'll need to pull it off horizontally, and might have to use a screwdriver to pop it loose.
5) The cam position sensor is also in your way. There are 2 10mm bolts holding the cover on, and behind that you'll find what I believe is called a reluctor wheel, though I'm not positive that's correct, so don't hold me to it.
6) The wheel is held on with a 10mm bolt. A lot of people on the forums say you don't have to lock the cams and the wheel shouldn't be on too tight. My wheel seemed to be on pretty tight, and I did lock my cams just in case and for piece of mind. In the video you can tell how tight it was because the bolt makes that typical *crack* noise when it finally breaks loose. Everyone also says you need to mark the position of it before removing, but there are 3 locator markings, so it can only be installed one way. There's no need to mark the position before removal.
7) The intake cam has a dust cap over it. You have to drill a hole in it to remove it, so you can replace the cap, or just dab a little RTV in it if you want to reuse it.
8) Robert DIY shows in his videos to drill a small hole in the cam seal, screw a drwayll screw into it, and pull it out with pliers. My cam seal came out when I drilled the hole in it. So maybe you'll get lucky like me, but if not, refer to the Robert DIY method.
9) When installing the cam seal, lube it up well so that the edges don't fold over on themselves. If that happens you'll have a leak on your brand new seal and need to replace them again. I started mine by hand, and then used that big 1 1/4in socket to tap them in with a hammer and have uniform pressure on them. I was told to install them a little past flush. That was the advice given to me from a well known Volvo mechanic in my area, and that's what I did. If you have a different method, feel free to comment!
10) Once you've done that for both intake and exhaust seals, installation is the reverse of removal! Remember to not tighten that wheel too much, just snug it up like it was when you removed it.

I hope this helped, please leave a comment if you have any questions!

* One note about problems I had after I replaced the cam seals. The intake rear seal was missing on my car. Because of this, the PCV system was "functioning" when I did the glove test. After I installed a cam seal, I blew out my front seals a few months later because the PCV system was in fact not functioning, and the previous owners must have removed the cam seal as a way to alleviate pressure. Any Volvo people know that PCV system is a piece of work, so if you don't know the history of your PCV system, check it after you do cam seals so you don't end up stuck in a Costco parking lot with an Exon Valdez size oil slick under your car. 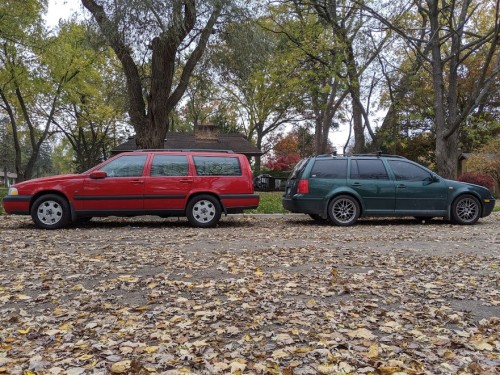 Thank you! Trying to be thorough without being overly detailed.