1. Unscrew the shift knob and remove the four screws attaching the shift boot frame to the center console. Two of the screws are below the ash tray and the other two are on the rear of the frame near the e-brake handle.

2. After the assembly is pulled out, remove the four screws from underneath the shift boot frame to remove the old leather boot. Pull out the plastic part of the frame still in the leather boot. 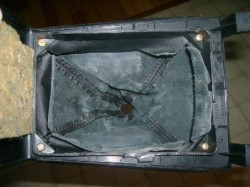 3. Remove the plastic assembly that the shift rod goes through that is near the top of the boot. 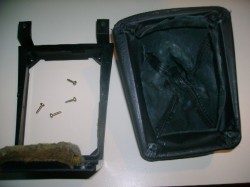 4. To install the new boot, follow removal steps in reverse. 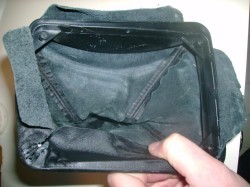 Once the base of the boot is released, slide the boot towards the end of the e-brake handle until it is inside out. Here you will see a metal clip holding the boot to the handle. The clip is held on by a rivet which you will need to remove by drilling through it and pulling it out with a pair of needle nose pliers. Keep this clip! 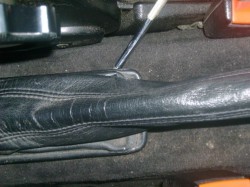 6. Once the clip is removed slide the boot the rest of the way off the handle.

Remove the metal frame from the old boot. The easiest way to do this is to cut it out of the leather if you are not going to reuse the old boot. 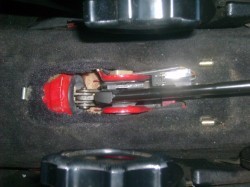 7. Turn the boot inside out and slide the narrow end of it over the end of the e-brake handle. Install the clip over the leather and the handle and fasten it by either using a new rivet or a short self tapping metal screw.

Roll the boot the rest of the way down the handle until it is right side out and attach the bottom of the boot to the three hook shaped clips. 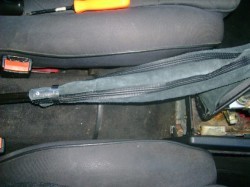