A few days when it was really cold outside a loud rattle appeared when the car was idling. Actually, it was more of a continuous TapTapTapTapTap..... and I had a hard time trying to figure out where it was coming from. It seemed to be somwhere either in the centre console, or around the passenger seat area. When I took the car in for the first oilservice at 5000 miles I reported it to the service writer. Of course, I just got the standard "...could not duplicate problem..." and "...we've never heard of this before..." answers.

The next time I heard the noise I was determined to chase it down. Listening around the passenger seat and footwell, I finally put my ear to the floorboards and decided that it was most likely coming from outside the car, not inside. The underside of the car is covered with plastic panels on either side, which are held on with plastic 10mm captive nuts and a few torx screws. I loosened pretty much all of the fasteners (all 7 of the nuts, plus 2 torx screws) to be able to see and reach the passenger footwell without completely removing the panel. There were several plastic lines, which I (correctly) assumed to be fuel lines, and pressing on them caused the same tapping sound when they hit the underside of the floorpan. The black line is the one that pulsates when the car is running, and causes most of the tapping sound.

I had a piece of split tubular foam insulation that you put around water pipes to keep them from freezing. This stuff is very substantial, will not absorb water and rot, and would be resistant to cold and warm weather. I cut a piece and wrapped it around the lines to keep them from hitting or chafing on the floorboard. I clamped it on tightly with some zip-ties, and reassembled the panel. Problem permanently solved, or so I thought.... 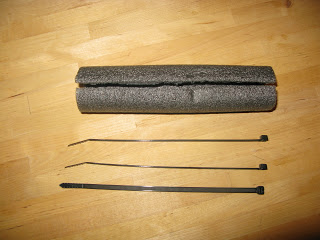 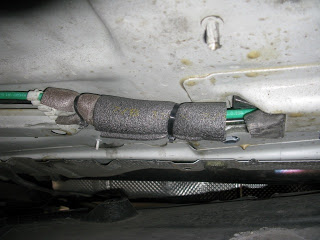 Update: January 2008
The rattle came back. I was really annoyed because I was sure it was permanently solved and was worried that my fix had failed. I lowered the panel again as described above and found the foam I'd zip-tied in place to be exactly as I had originally done it. However, right in front of where I put the foam is where the lines disappear into a channel in the floorpan. There was one oval hole in the channel that I could stick a finger in, and sure enough, the plastic lines were laying against the metal and making the tapping sound at idle. 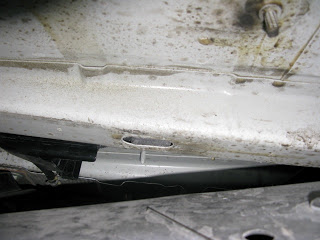 I took some more of the same foam insulation and cut two pieces that I could fit into the oval opening. I was able to hold the lines to one side and stuff a piece of foam in the opening, then do it the other way so that the plastic lines were surrounded by foam at that point, not pressed against the inside of the metal channel. This seems to have really solved the problem this time - no more tapping sounds at all. If you have done the fuel line rattle fix (my way, or the official part below) and you still have a tapping noise from the floorboard, have another look at it.

As a side note, those plastic panels under the floorpan were *full* of salt crystals and sand from the roads. I cleaned it all out with a brush before reinstallation, but I don't like the idea that they're trapping corrosive material that way. After the winter I'll lower the panels on both sides and pressure-wash it well. 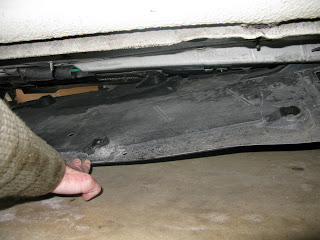 Apparently the rattle was a real problem with both the A3 and the (Mk. 5) VW GTI. Some time after I did this originally in 2006, service bulletins (TSBs) were issued for the GTI, and later the A3, which provide a fix using 2 rigid foam blocks(part number 06A 141 730 A) that is virtually identical to what I did.