B5 A4 with concert/Bose stereo budget aftermarket upgrade

I just picked up a 1998 A4 a couple weeks ago and was very dissatisfied with the stock stereo. I wanted IPod, usb, Bluetooth, aux in, all that good stuff, and I wanted it to sound better. But I didn't want to spend much money at all. My budget was under 200$ -- I had moderate success.

I'll try to do a fairly concise write-up of what I did and what I learned to make it easier for people in the future.

I learned that in the Bose/concert system in the car is all run off the stock amp in the back. The head unit sends out front left and right, and rear left and right low-level RCA signals. So you can use an aftermarket HU that has at least 2 pre-amp outputs. The "subs" in the rear deck aren't on an adjustable subwoofer channel. They are just signals taken from the front and rear signals, the amp must just have the crossovers it needs in it. The front speakers are 4" stock, I suspected I could jam a 5" in there fairly easily. The tweeters are about 1". The rear deck "subs" are 6.5". I didn't mess with the rear door speakers. All are 2 ohm.

I decided to try keeping the stock amp, adding a new stereo, and replacing the front door speakers and the rear deck subs. Here's the equipment I decided to install:

and got all this for free:
Harness
Dash Kit
Antenna Adapter

Then I ordered 2 of each of these speakers from parts express:
Replacement subs
Replacement door woofers
And i had a pair of 2 ohm tweeters laying around from an old project. they are the ones out of this speaker set:
JBL GTO508C 5.25" 2-way Component Car Speakers - Sonic Electronix

The dash kit, wiring harness and antenna adapter were all correct, and were plug and play with no modifications. I just soldered up the harnesses, made sure to connect the remote antenna wire, and yanked the old stereo with the keys crutchfeild gave me, and plugged it in. Works great. The dash Kit just goes right in from the front, and it sits surprisingly flush and fits well. It's not perfect, but it's not bad either. I used the included spacer.

Impressions with new stereo and stock speakers: Eh. At least I have the inputs I need, and it sounds slightly better maybe.

The speakers were slightly more trouble, but not much. The rear deck subs were easy, I just pulled the old ones, and put the frame on the new ones, wired the voice coils in parallel to get 2 ohms, and took the connector off of the old subs and reinstalled them.

The front doors come off with 2 ends screws up by the windows on the edges, then you take the screw out from the handle in the center, pop out the plastic piece, then take the two screw under that out. Then slide up the panel, and disconnect the door latchmechanism, and all the wire plugs. The speakers are installed in the plastic panel (kinda lame)My car had some thin foam covering the whole back, it peals back easily to reveal the speakers.
The woofers are easily removed, just unscrew and unplug them. The tweeters arent hard either, there is a small red screw to unscrew from the back, then the whole handle/tweeter trim piece pops out the front, then a wire clip holds the tweeter in.

For the woofers, I picked up some foam rubber weather-strip and stuck it all the way around the edge of the woofer to make a gasket, then i drilled an extra hole in the frame of the speaker to that if 2 holes of the speaker aligned with the bottom two screw holes in the panel, my new hole roughly aligned with the top one. I then used the stock screw on the top, and two similar, slightly longer screws for the bottom holes. With some slight forcing, I screwed the screws in and the speaker fits nice and tight. I was worried about mounting depth, but it worked out fine.

The tweeters I had just fit right in where the old ones were and clamps with the stock clip and were in tight, but not too tight to smash the tweeter. It was a little ridiculous how well they worked out.

Then I just soldered up my wires, and reassembled the doors.

Impressions with new stereo and new speakers: Uh oh.... I've made a mistake...

The tweeters were unbelievably harsh and out of balance. it was all I could hear. I couldn't even tell if the "subs" and mids sounded any better cause the tweeters were too harsh. I thought... well, experiment failed. Haha. But then I decided to mess with the EQ a bit on the stereo to see if I could adjust it to make it listenable. I found that if I turned the treble level almost all the way down it became halfway decent, even enjoyable to listen too, and if may even be better than stock. The more I listened to it and tweaked it the more satisfied I was. The mids are definitely better, and the tweeters aren't terrible when they are turned down. The subs in back may have been a slight improvement, but Eh...

I assume whats going on is that first of all, the crossover frequencies of the amp dont exactly match what the speakers would like. Maybe its trying to make my tweeters play too low and not giving the mid enough, or vica versa. Also the tweeter is more sensitive than the woofer, and without adequate crossover control, its touch to get them to balance.

Overall I'd say the project was worth it. For under 200 bucks and a day of work, it really does sound significantly better than it did. And I may just have a picky ear too, I'm used to dropping over 1000$ on a stereo system. But if you're serious about upgrading the stereo I highly suggest you save a couple more pennies, and put an aftermarket amp in to run the a nicer set of 5.25" component speakers and a more legit sub. Also, the doors are really crappy for putting good speakers in, so unless you want to mess with them, you're going to have a tough time getting it to sound amazing.

So anyway, this is way long so ill end it. Feel free to ask questions.

Pics:
New tweeter installed in stock location. Thats the old tweeter sitting next to it. 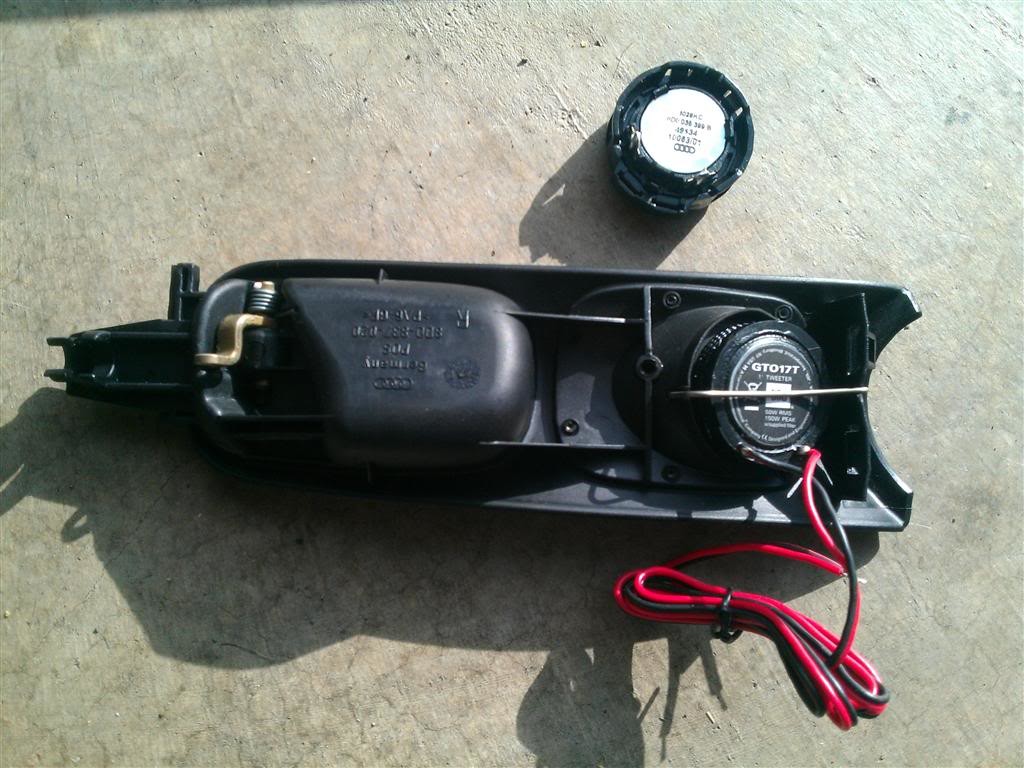 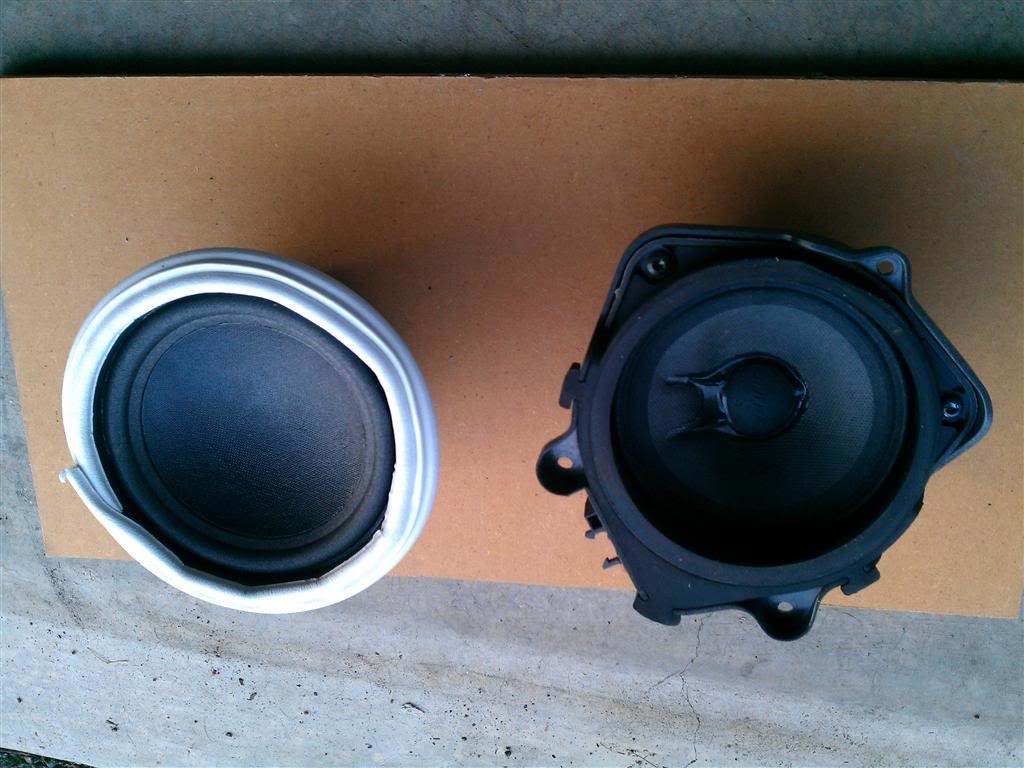 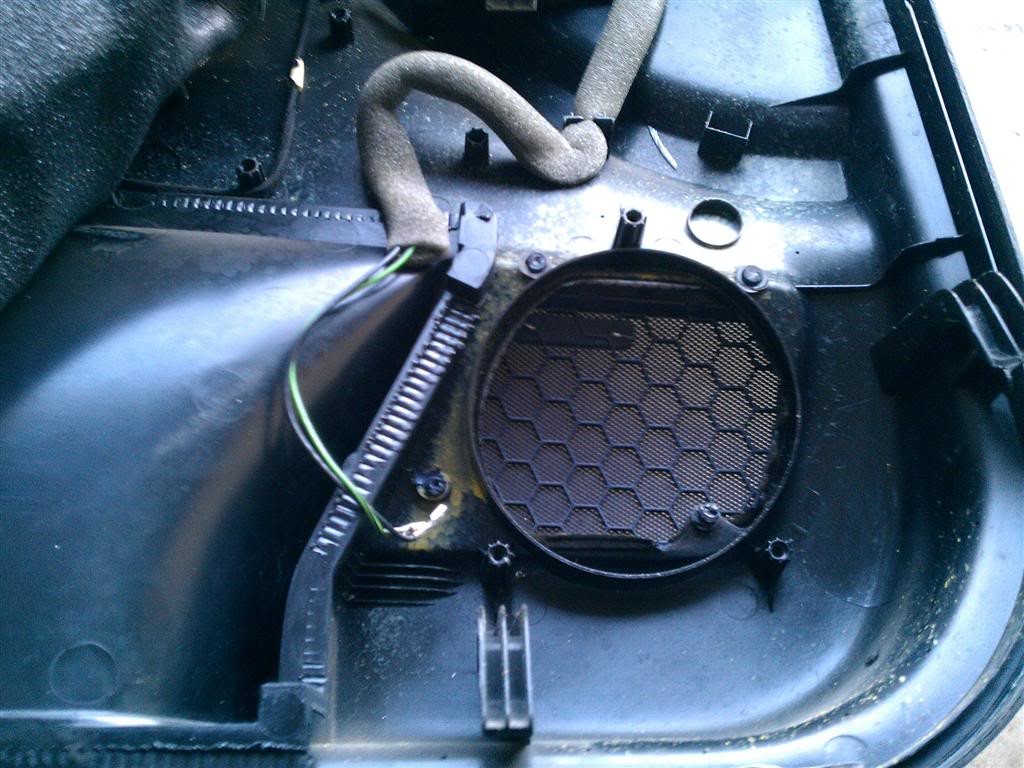 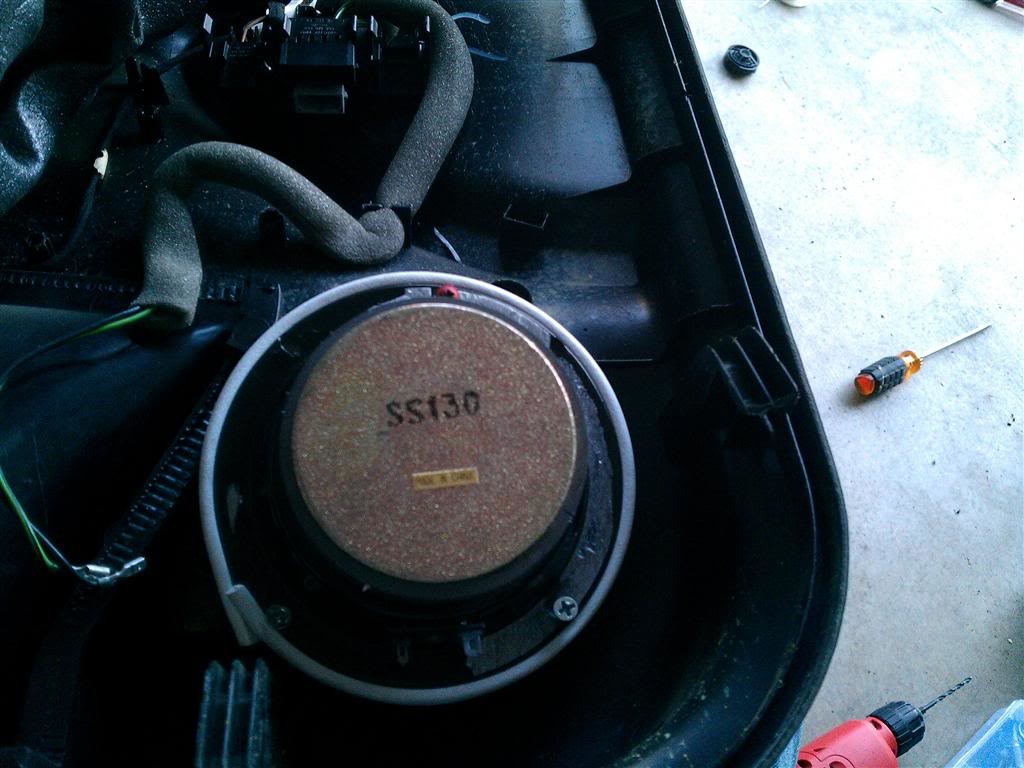 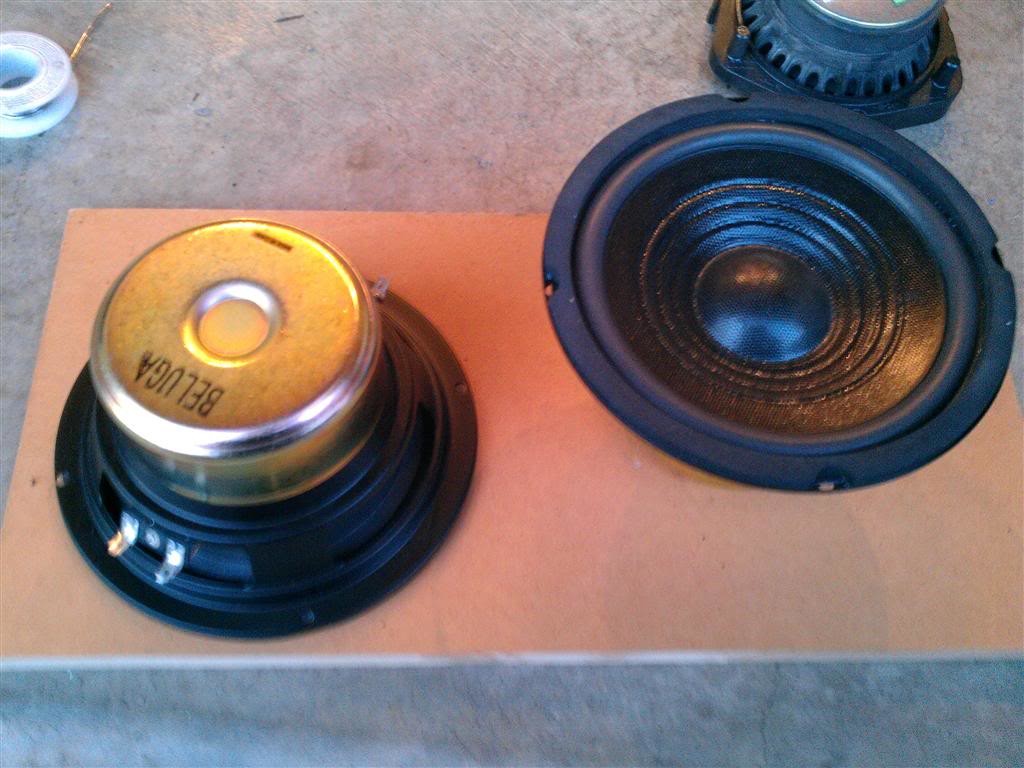