Keeping the 135i oil cool

Now that more and more modifications are available to make the 135i faster, anybody tracking these cars will probably need to keep the oil temp in check.

We'll be trying the Dinan oil cooler kit in our race car along with a good synthetic race oil, the Total Quartz 10W-50 Racing oil

I'll try to get some pics of the install being done by BMS in Santa Ana. Hi-res pics in my gallery: 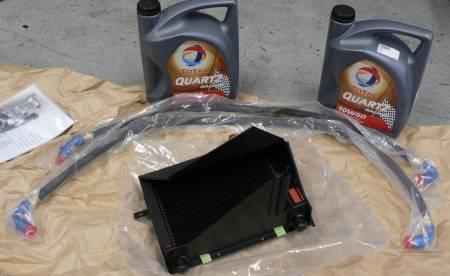 The 135i already comes with an OEM oil cooler in right front fender well, but the Dinan unit has twice the capacity. So this kit replaces the OEM unit.

One thing to consider with multiple oil coolers is the additional drop in pressure.

I think it's usually considered better to go with one large oil cooler than more than 1 smaller coolers. But I can see where there might be reasons where 2 oil coolers is the way you'd have to go.

But we're going to give the Dinan a try - we definitely got into 'dynamic rev limiting' mode at a few tracks last year, so we'll see if we avoid it this year.

The shop I work with here in SoCal, BMS in Santa Ana, uses Ron Davis Racing aluminum radiators that are basically NASCAR radiators. They just fitted one in the M3, so if it comes to that, we may try getting one of those fitted in there.

Let the games begin. Herm at BMS started work on the project.

As usual, higher res in:

Sorry for focus issues on some 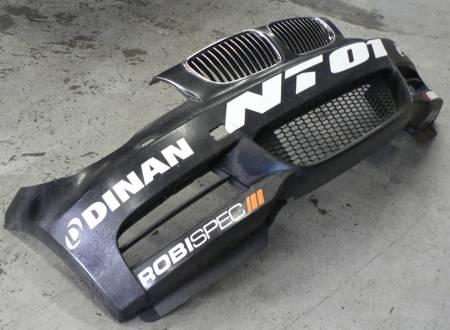 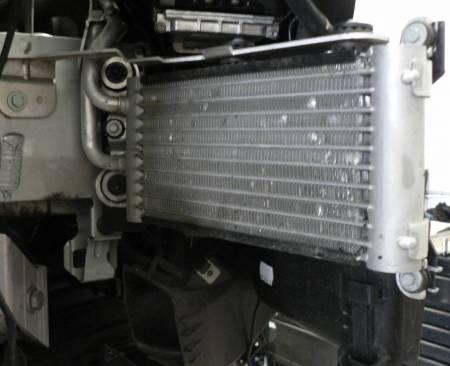 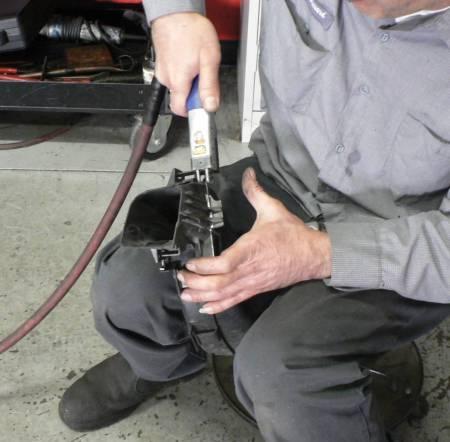 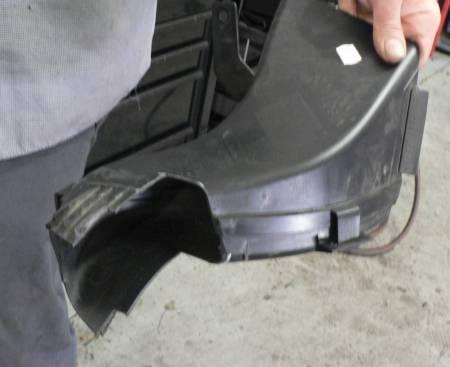 Hang the new Dinan oil cooler in place - it uses the left side OEM hanger. At this point, OEM cooler is still connected to oil lines. 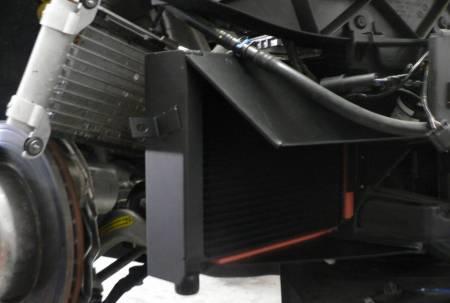 From this view, you can see the difference in height and depth of the Dinan vs. the OEM cooler 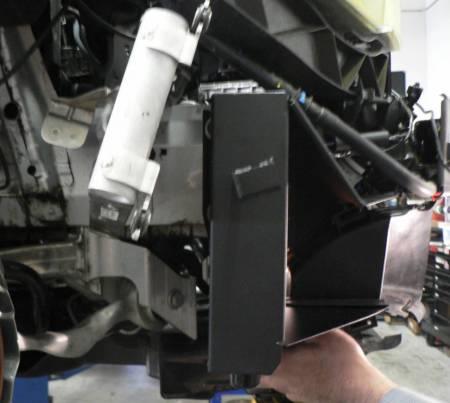 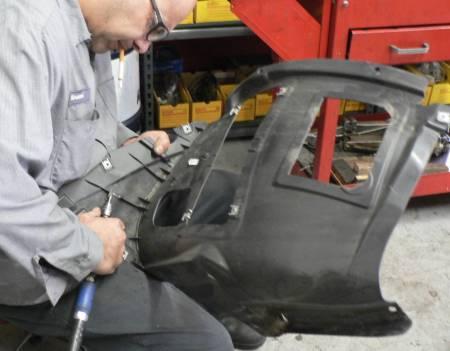 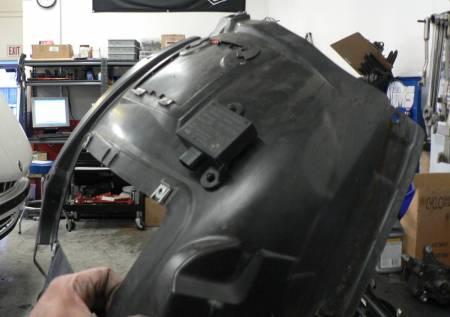 Disconnect the OEM cooler lines at the oil filter housing and pull out through fender. You should be able to pull it out in one long piece 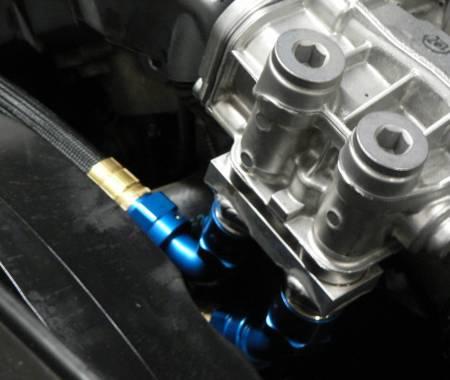 Hook up the lower end of the oil lines 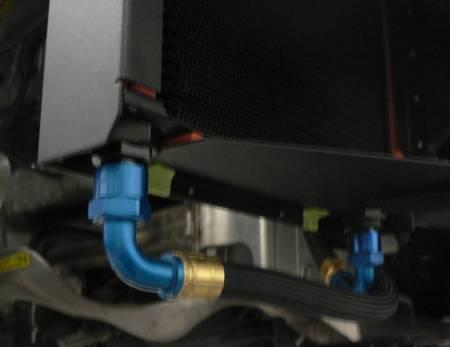 Back when modifying the right brake duct, they also had you cut a hole and slot to get one of the lower end of an oil line so that it sits in the brake duct when installed. The picture is from the back end of the brake duct. 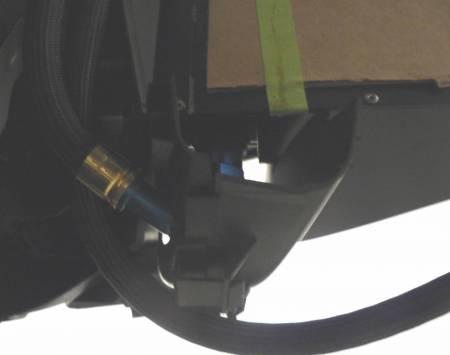 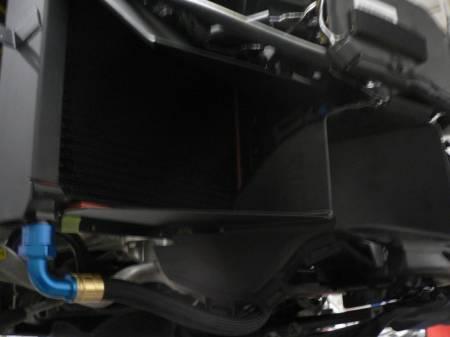 When everything is put back together, I'll have to see how much room there is betweend the oil line connectors on the bottom and the bottopm part of the front fender liner that runs foward to meet the front bumper, but definitely not something to go off-roading with. So we'll have to watch out for that with the race car.

We raced the car at PIR this past weekend and that is a track that tends to make engines run hotter. I think Ralph said they got up to about 265 deg. F and the car did not go into 'limp' mode the entire weekend. The sprint races were 40 min. races (normally 30 minutes), so I would say so far so good. We'll see when we get into the summer months.

Got to be careful with that on a road race car that can go off course occassionally. We had one off-road excursion with the 135i at the end of last season: cracked oil pan, cracked rear diff. cover, torn undertrays, etc. On previous BMWs, the middle of the trunk pan was a great place for cooler mounting with a hole cut in the floor, but with a 135i in stock class, the battery sits in the middle trunk base now.

We only have one data point so far with the Dinan unit at PIR (which is track that tends to heat up engines and a track we had hit the limiter before) and we did not hit the dynamic rev limiter. But we are also using a race oil that has a reputation for helping to lower engine temps.

We are using the Total (used to be elf on the label) Quartz Racing 10W-50 down here in SoCal, but with you being up in Canada, you should maybe opt for their 5W oil (I think it's 5W-30)

People continued to the use the term 'limp mode', but I think of limp mode as when the computer senses an engine problem where it basically will let you drive the car at like 45 mph until the car sat long enough to clear the fault. I used the term 'Dynamic Rev Limiter' mode based on the way Ralph described what the car was doing. I don't know all of the conditions BMW built into the test, but Ralph said the car was still pretty driveable, but it just wouldn't let him have all the capability of the car until it was happy again. I'd heard someone say (or post) that for the temp, it was actually monitoring the water temp and not oil temp (but keeping the oil temp lower helps keep the water temp lower). But I don't know that for certain either (that it's based on water temp).

Where is your 2nd oil cooler located? There are differing opinions on cooling oil. Some people think a lot more capacity (total amount of oil available to the system) is most important. Some people think that air flow to and thru the cooler you have is the most important factor. What Dinan does is go larger and try to get more area of it getting flow (it uses a good part of the brake duct opening). The HKS setup adds an extra cooler, but it is up behind the bumper as well.

There are also differing opinions on 1 large cooler vs. multiple coolers. I haven't tried multiple coolers on a car yet. We've always gone with the largest single cooler we could fit.