This DIY is for adding Bluetooth with Voice Command features to your 1998 to 2006 BMW E46 Sedan, Coupes and Convertibles. This DIY focuses on integrating an aftermarket bluetooth and voice command into the BMW Business CD53 Radio (all year Blaupunkt or Alpine models) so that you control your mobile phone's incoming and outgoing calls only using the steering wheel buttons and your voice.

The DIY difficulty of this project is very easy and takes the average Joe about 30-40 minutes. The only tools required are clean fingers, a star point screw driver and flat clean dull butter knife for prying the dash trim off. There is no splicing wires, no removing seats or console armrest, no adding antennas on your roof or digging around your trunk for cables. This DIY ONLY requires removal of the Radio, Center Vent and Glove Box (total of 10 screws) and everything else is plug and play. Some DIYs state that removal of the A P!llar is necessary for running the mic to the headliner but I will show you that it is NOT necessary to remove the A P!llar.

The cost of this DIY can vary. You will need to purchase the Connects2 CTPPAR007 steering wheel integration kit from the UK vendor
( http://www.lowcostcaraudio.co.uk/lcc...er/pid/7642231 ) and their price is set at £49.99 (about $80.00 USD). And next you will need to order the Parrot CK3000 Bluetooth kit (it is also called the Parrot ck3000 evolution) which can cost from $9.00 and up on eBay. You do not need to buy anything else nor can you substitute other Parrot Bluetooth kits or aftermarket Steering Wheel/Radio Adapter harnesses. It will not work here. Also do not get tempted to save money on the CTPPAR007 and buy another similar Steering Wheel Control Adapter harness-and they are lots out there that claim to work with various bluetooth kits. It will not work here. This DIY will ONLY WORK with the CTPPAR007 and the Parrot ck3000 together!

When said and done this DIY will upgrade your BMW with much of what the OEM Bluetooth does including instant and automatic pairing and unpairing when you enter or exit the car, one button touch voice command, one button touch redial and full radio and steering wheel integration. The only thing you will not get is full Caller ID read out on your radio display-instead it will display PHONE or WAIT. This is something I can do without as I may have people sitting in my car and I do not want them to see who is calling me (see under girlfriend).

PART ONE: Looking at what we got


When you open the Parrot ck3000 kit you will see the obvious main bits (the blue box, the mic and the controller) and you will also see a bag filled with a few wire harnesses and a black rectangular module for connecting to the radio and allowing for the mute function. You do not need this since the CTPPAR007 will replace this portion of the ck3000 kit. Also you MUST HAVE the ck3000 Controller connected to the main blue box in order for the CTPPAR007 to make the steering wheel buttons work with the kit. You do not need the controller on your dash when using the Bluetooth as it only needs to be connected so you can tuck it behind the glovebox with the other modules.

PART TWO: Opening up the Dash

Here is a picture showing the location of the six screws. Unscrew these and the glove box will drop out easily. 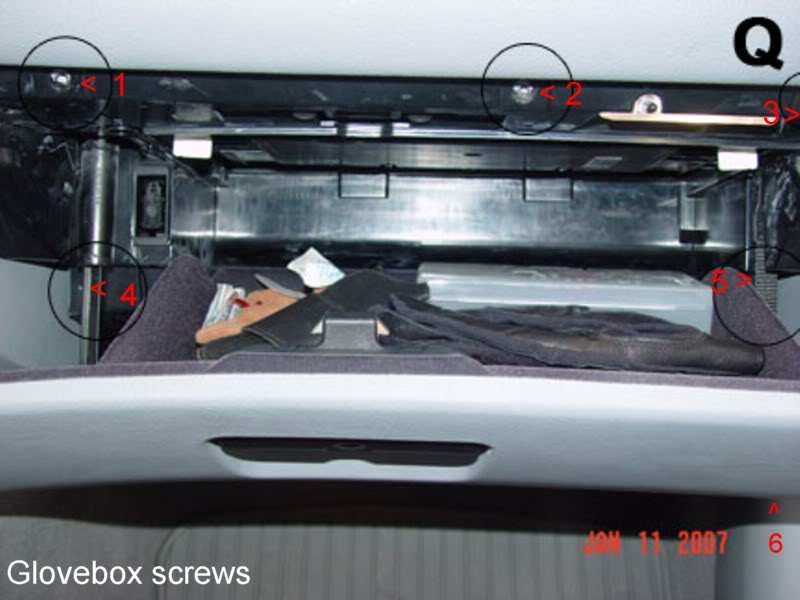 PART THREE: Installing the Guts
NOTE: For ease of understanding this DIY I've taken the liberty of labeling the Harness Head Connectors as A, B and C. This labeling is only specific to this DIY and not used by Parrot or Connects2.

The A Connector is what you have in your car right now. It is what connects the car to the BMW Business CD53 Radio. With the exception of the possible Data Link miniconnectors that attach to the bottom section brackets(you may or may not have these Data Links in your car's A Connector depending on whether your car has prewiring for the CD Changer or AUX input/Sirius/Ipod Data Links) these are all the same on all BMW E46 vehicles from 1998 to 2006.

The B Connector. This is what will replace the function of your A Connector when you install the kit. Or a better way to say this is that it will take on the role of the A Connecter in connecting directly to the CD53 Radio and also carrying any Data Link connectors that you have going into the Radio.

The C Connector forms a connection with the original A Connector in your car thus connecting the entire Bluetooth system AND CD53 Radio to the rest of the car (IE. for power, ground, speakers, etc...). This C/A Connection is the only thing that adds difficulty to the DIY as it is hard to tuck away behind the Radio when replacing the Radio unit. So we must set the C/A Connection above the radio space and to the side of the upper Center Vent space.

PART FOUR: Setting up your MIC

And that is it you are done!


I been getting a few PMs from folks with GPS Factory Navigation units looking for the 17 pin A Connector in their cars or wondering if they have the same connections.

From what I can tell you do have the same A Connector but it is location in the trunk with teh GPS Computer ECU/DVD module.

So you will need to hook up the parrot ck3000 and ctppar007 all in this trunk space and run the mic thru to the cabin dash area. The ck3000 mic wire is long enough to pass thru the firewall into the cabin along the driver's side and you can place it on the dash or A p!llar column. If it is short you can get a mic cable extender at RadioShack or any electronics store.

Here is a direct link to the picture album;


and my eBay auction info showing where I got my stuff.

I moved my oem location for the mic grill closer to the driver side where my head is, and more aft in the cabin where the other passengers are.
I didn't have a problem with the mic before, but I'm told that my voice comes across more clearer and louder now.

The BMW Bluetooth Assist button can be bought off eBay for about $10 to $25 (DO NOT buy the ones Murad Motors sells as he overprices his switches to $50 and they don't come prewired). Make sure your get the older style switch with the two buttons like in my pictures below-this is the switch our cars are pre wired for and you will find the wiring for this switch inside your sunroof switch hatch.

Mark out your outline...make it slightly smaller than the actual hole that you will use


Then get a sharp knife and cut away at the plastic until you feel it flex at the cut so it just snaps off.


Your finished hole will be smaller which is good because you DO NOT want it to be too big.
So get your file and file down the edges. The plastic will file away really quickly so go slow.
If you are placing the sunroof switch on the original mic grill spot you will have to file that hole down as well since the mic grill hole is smaller than the sunroof switch


Finished product. Make sure everything is lined up and if you mess up just go down to the dealership and buy another hatch lid cover as they only cost around $17 to $23.
DO NOT buy the junkyard ones off eBay as those junk yard sellers tend to want $40 - $60 for the same part in dirty used condition. I have confirmed that the BMW dealership sells these parts for $17 to $23!

Inside view of the hatch showing the new location of my parrot ck3000 mic. I used a drop of krazy glue to get it to stay in place.


Final view when said and done!