I am making this E46 BM53 MK4 Navigation Integrated Bluetooth Voice Command for Less than $100 DIY thread separate from the original thread for those of us with the OEM 16:9 Monitor Navigation incorporating the MK4 and BM53 Radio Receiver in the trunk.

NOTE: This thread will cater to BOTH those with the original 16:9 BM53 MK4 factory navigation that came with the 2002 to 2005 e46 BMW 3 series cars from the factory and those who retrofitted the OEM MK4 BM53 16:9 CD/Tape Monitor Navigation using the BMW E46 Navigation Retrofit Harness.

3. Follow the original thread for installing and prepping the ck3000 and ctppar007 here:

Originally Posted by delmarco
FIRST OFF: I must give much props and thanks to SycE46 for giving me the idea for doing this. He had already did this DIY on his car by the time I started it on mine and without his advice and directions this Pictorial DIY Project would not have been possible. Thsnks SycE46!


This DIY is for adding Bluetooth with Voice Command features to your 1998 to 2006 BMW E46 Sedan, Coupes and Convertibles. This DIY focuses on integrating an aftermarket bluetooth and voice command into the BMW Business CD53 Radio (all year Blaupunkt or Alpine models) so that you control your mobile phone's incoming and outgoing calls only using the steering wheel buttons and your voice.

The DIY difficulty of this project is very easy and takes the average Joe about 30-40 minutes. The only tools required are clean fingers, a star point screw driver and flat clean dull butter knife for prying the dash trim off. There is no splicing wires, no removing seats or console armrest, no adding antennas on your roof or digging around your trunk for cables. This DIY ONLY requires removal of the Radio, Center Vent and Glove Box (total of 10 screws) and everything else is plug and play. Some DIYs state that removal of the A P!llar is necessary for running the mic to the headliner but I will show you that it is NOT necessary to remove the A P!llar.

The cost of this DIY can vary. You will need to purchase the Connects2 CTPPAR007 steering wheel integration kit from the UK vendor
( http://www.lowcostcaraudio.co.uk/lcc...er/pid/7642231 ) and their price is set at £49.99 (about $80.00 USD). And next you will need to order the Parrot CK3000 Bluetooth kit (it is also called the Parrot ck3000 evolution) which can cost from $9.00 and up on eBay. You do not need to buy anything else nor can you substitute other Parrot Bluetooth kits or aftermarket Steering Wheel/Radio Adapter harnesses. It will not work here. Also do not get tempted to save money on the CTPPAR007 and buy another similar Steering Wheel Control Adapter harness-and they are lots out there that claim to work with various bluetooth kits. It will not work here. This DIY will ONLY WORK with the CTPPAR007 and the Parrot ck3000 together!

When said and done this DIY will upgrade your BMW with much of what the OEM Bluetooth does including instant and automatic pairing and unpairing when you enter or exit the car, one button touch voice command, one button touch redial and full radio and steering wheel integration. The only thing you will not get is full Caller ID read out on your radio display-instead it will display PHONE or WAIT. This is something I can do without as I may have people sitting in my car and I do not want them to see who is calling me (see under girlfriend).

PART ONE: Looking at what we got

When you open the Parrot ck3000 kit you will see the obvious main bits (the blue box, the mic and the controller) and you will also see a bag filled with a few wire harnesses and a black rectangular module for connecting to the radio and allowing for the mute function. You do not need this since the CTPPAR007 will replace this portion of the ck3000 kit. Also you MUST HAVE the ck3000 Controller connected to the main blue box in order for the CTPPAR007 to make the steering wheelbuttons work with the kit. You do not need the controller on your dash when using the Bluetooth as it only needs to be connected so you can tuck it behind the glovebox with the other modules.

4. And as you are retrofitting your Navigation monitor this picture BELOW should make sense to you. Even if you are installing the Bluetooth kit after the fact the picture should still make sense as you are removing what you previously installed and connected behind the Nav monitor in your dash:

All your connections will be in the front of the car with the ck3000 Bluetooth ECU and Connects2 ECU stashed behind the glove box.

5. Those who have Navigation that came originally on the car from the factory your journey will be slightly different. You will need to purchase the Parrot ck3000 or Eclipse BT-E600 kit and instead of the connects2 ctppar007 you will NEED the CTPPAR008 that comes with the flat pin connector for the BM53.

All your connections will be in the trunk where your BM53 is and NOT the Glove Box/Dash area.

6. Once this connection is made you will have a fully operational integrated in-car Bluetooth and Telephone Voice Commands (depending on your cell phone and cell phone service) operating off the Steering Wheel and Navigation Monitor buttons. 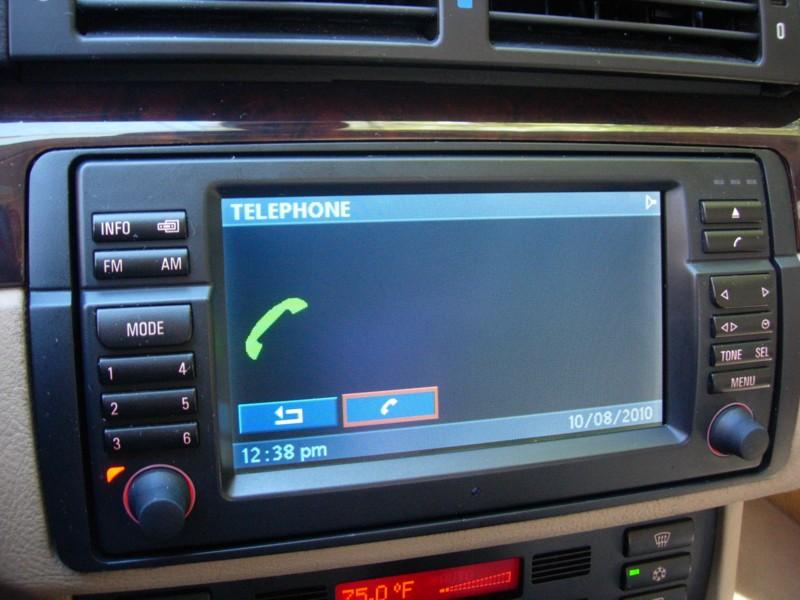 Here is a video sample - towards the end of the video I demo the Bluetooth/Voice Command Features. My phone is a T-Mobile Blackberry 8900 Javelin Curve with the latest 10/2010 Blackberry OS upgrade.