Production Date of a BMW Business CD53 Radio unit is the worst indicator to go by when looking for a unit that has integrated AUX IN or MP3 CD playback capabilities.

You will NEED to acquire the Part Number of that CD53 Radio to properly assess what that unit is capable of.

Based on the fact that BMW started production of CD53 Aux In Radio in the late summer of 2003, the general consensus is that E46 cars made after mid year 2003 should have Aux In capable CD53 Radios but this is proven time and time again to not be the case. Some folks with late 2003 and even early 2004 production year cars usually discover that their car's CD53 Radios DO NOT have a working Aux Input capability.

Many of us own these cars as second and third hand cars so there is no telling what the previous owners removed and installed from the cars.

Also CD53 Radios that failed would have been replaced under warranty and that car could have received other CD53 Radio units with later or earlier production dates and P/Ns. This is the case with many 2004 and 2005 CD53 radios that had MP3 CD playback.

So if you have a Production Year 2003 BMW E46 or are buying a radio or car from the 2003 and 2004 Production Year stock there is absolutely NO guarantee that that car currently has a CD53 radio with the Aux In feature.

Below I have compiled a list that will help you in deciding what to buy based on your needs.

BMW Business CD53 Units manufactured and dispatched for the USA E46 cars from 1998 to 2007 with their respective Part Number, Production Period, and what each unit is capable of :

NOTE: iPod Data Capable is ONLY if the car is Prewired in the trunk for the CD Changer - You can also add Aux Input ONLY thru an iPod Data Kit like the USA Spec PA12 or the DICE iPod kits

If you find any BMW Business CD53 Radio Unit with a production year date sticker on it that is later than these production dates corresponding to each part number unit (IE. a year date that is 05, 06, 07, 08) it is most certain that those units are re-manufactured/refurbished (RFMD) under warranty and re-labeled to reflect the date of re-manufacture. This is especially true for the factory recalled MP3-capable BMW Part Number 65. 12-6 943 429 unit which is always re-labeled to become BMW Part Number 65. 12-6 943 430 after refurbishment.

Part Number: 65.12-6 961 215 will also give your car MP3 playback ability. These were superior post stock original production units that were made on the last production E46 coupes, convertibles and M3 cars from late 2005 until late 2006/ 2007. If you come across one of these on eBay for under $300 then immediately buy it! These will give you the full capacity and digital function of all the previous CD53 Radios including MP3 playback and it lacks the refurbished and buggy history that the Part Number: 65.12-6 943 429 units come with.

Which is why when you browse REALOEM you will see a lot of strange new P/N come up and some common P/N are not there for the Alpine Business CD53 Radios.

It is possible to find a refurbished P/N with a really late production date like say Dec 2007 or May 2008. Because of this the Production Date of the later years CD53 will tell you little information on what that CD53 unit is capable of. You will need the Parts Number to find out the true identity of that CD53 unit.

They are lots of sellers that try to bump up the price of their Re-manufactured/Re-furbished Part Number: 65.12-6 943 430 units because they will tell you it has a late production date like NOV 05 or something like JAN 07 and the quality or newness is better.

This is to rope you into buying a refurbished unit for more money than those units are actually worth relative to the original Part Number: 65.12-6 943 429 units (which can come with bugs and can be pretty much something you may want to avoid).

Here are some pictures of the Alpine Business CD53 Part Number: 65.12-6 961 215 Radio and the label location where the P/N and Production Date are;

Here is another pristine unit made in May 2006: 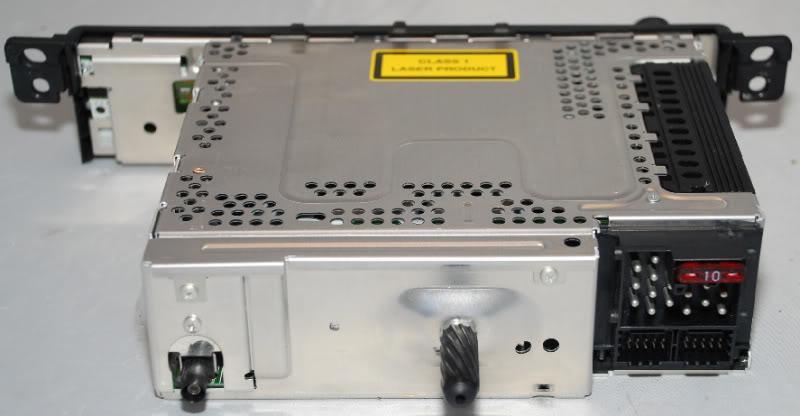 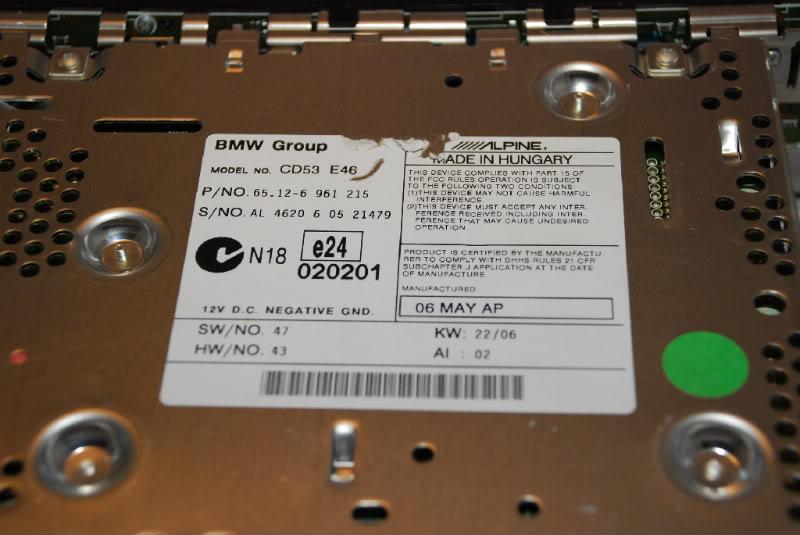 In these pictures below you will see how this slick eBay seller tries to peel away the Remanufactured Parts# sticker to reveal the original Parts# beneath so that he can bump up the price. He is selling his units for $309 and $319 based on the prod dates of NOV 04 and FEB 05 respectively claiming the later build date deserves the price increase when both of these units are most likely refurbished versions of their bug ridden/factory recalled Part Number: 65.12-6 943 429 original units. Not all 429 units went bad. Those that did, went bad early on and already got refurbished to factory new and replaced as 430 units. So buying a 429 unit today will be perfectly okay. 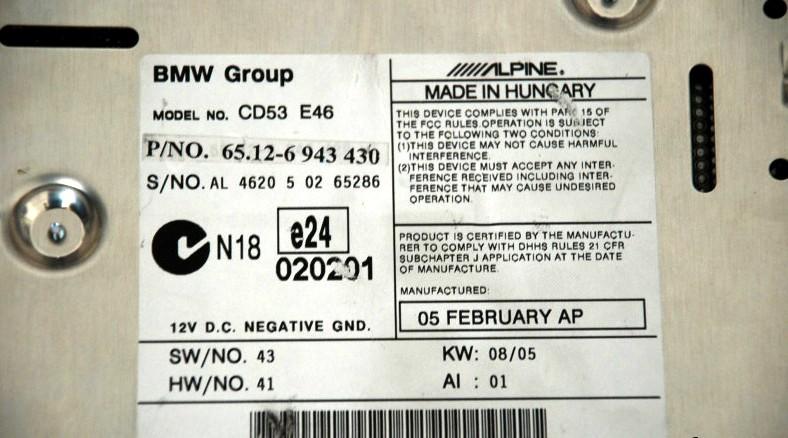 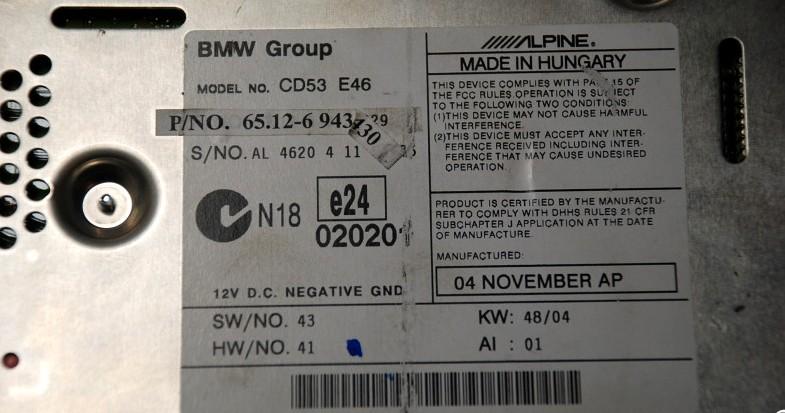 A general rule of thumb for visually inspecting if the unit has MP3 digital capabilities is that the Business CD53 Radio that play MP3 files usually has the black trim along the same side as the pin17 connector-input that is in the back. 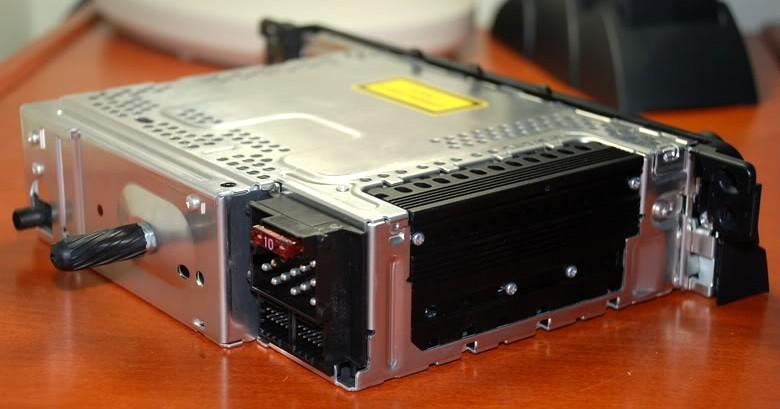 And it should ALWAYS be an Alpine-made unit that has the MODE button in the place of the older Blaupunkt CD button under the AM/FM buttons.

VISIT MY GARAGE TO SEE ALL MY MODS: