This one is a bit lengthy, so pop up a bag of corn and grab a beverage..

It comes up often in various posts, so I thought I would take some time on this Saturday to illustrate for you all that there is a false "know fact" circulating in our circles.. it goes like this:

All Buick engine blocks are prone to core shift. What is core shift you ask?

Core shift occurs at the foundry when the blocks are being cast. The internal core will shift from the external core during casting, resulting in an “off center” block. The biggest problem with this is an un-uniform cylinder bore thickness. It is of utmost concern when using large overbores or very high horsepower.

The easiest way to check for core shift is to look at the cam and lifter bores. If they are in the center of the cast bulkhead in the block, the core did not shift too much, if they are way off center the core did shift. A block with a moderate amount of core shift will still be okay for mild performance use.

But that's only the first "visual test" of an engine block.

To illustrate this, I am going to show the pictures and sonic check of a '75 "Blue block" as they are typically called, that was sent to me some time ago, by a board member, for one of my Level 1A buildups.

This block is a great example of the exception to the rule, and why every Buick 455 should be sonic checked before rebuilding.

What is a sonic tester?- the sonic tester sends out a sound wave and then calculates the thickness of the metal by measuring the time for the reflected wave to return to the sensor.

The 4 axis for checking a cylinder are:

3 check points are done at each of the 4 'sides' of the cylinder. One under the deck surface, one in the middle, and one near the bottom, make up the 12 check points for each cylinder.

Let's talk terminology for a minute:

This is the side that sees the highest loads, and should have the thickest cylinder walls.

The side of the cylinder wall opposite the major thrust side.

While the pin sides of the cylinder see little thrust force on them, they are important in keeping the cylinder round, as the piston travels thru it's major and minor thrusts. And a cylinder that is honed round, and stays round in use, is one of the biggest contributing factors to overall power production.

So.. now your up to speed.. and what I am going to say from here on out will make a lot more sense.

Let's talk about this specific block.

4- Buick Motor Division
5- Last digit of the year of production for the vehicle is engine went in. In this case 1975
X- Final assembly plant of the vehicle
The last six are the sequential vehicle number, and they match the dash VIN

So with this in mind, take a look at this block's lifter bores. 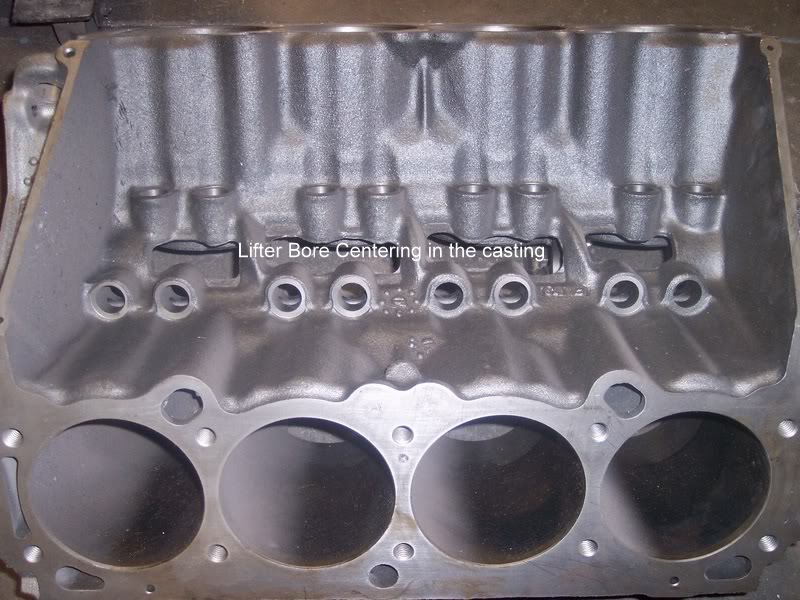 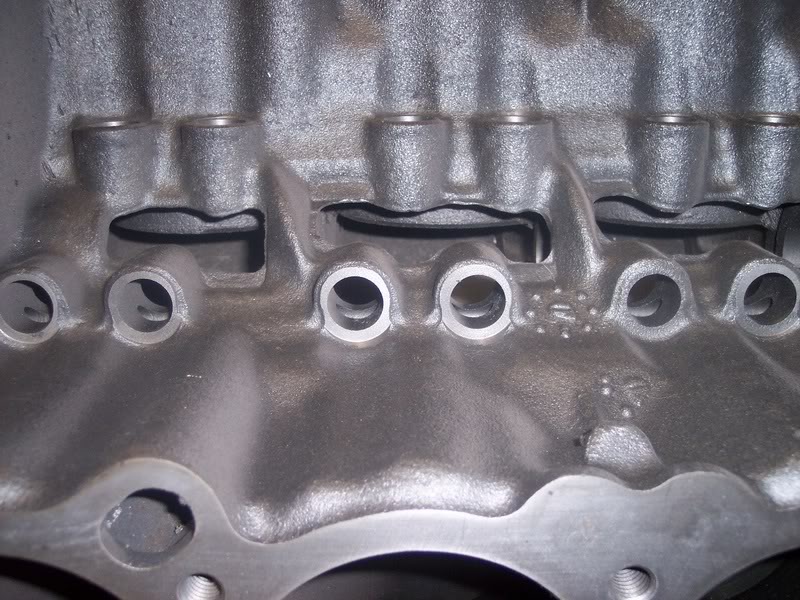 From these pictures, this block looks like a great candidate for a high performance buildup. Both my customer and I thought so, from initial inspection.

Now I said that there was some truth to looking at the lifter bores.. and there is, you will see evidence of core shift here. If they are really off center, more than likely the cylinder thickness will correspond to the lifter bore positioning..

But not always.. and that's the point of this diatribe.

Here is the sonic check worksheet for this block. 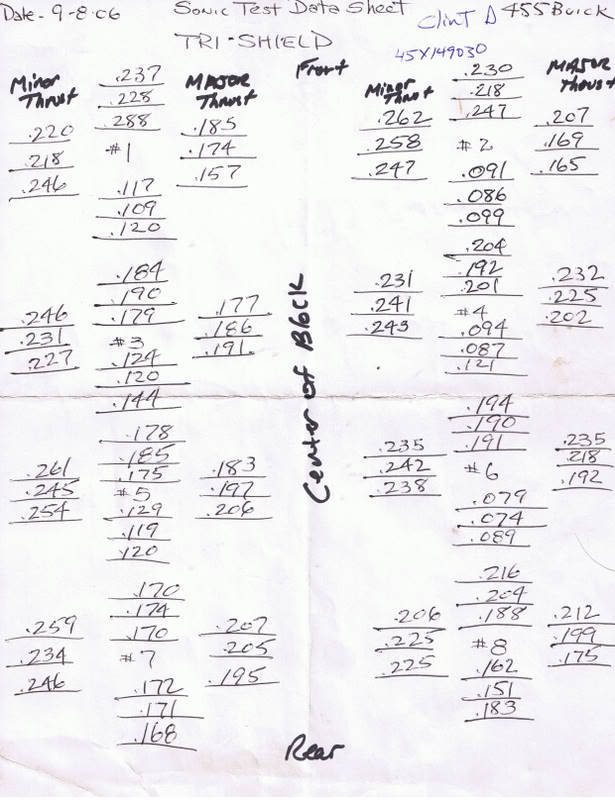 Two problems were uncovered, and I was surprised to see them.

1. Look at the major thrust side, vs the minor. The block is shifted exactly the wrong way, with the major being thinner than the minor. For high performance blocks, I always look for the block to have at least .200 cylinder wall thickness on the major thrust sides of the block. I prefer that number to be closer to .250. And the higher the performance required from the block, the more picky I become with these numbers.

2. Look at the rear of the pin side, on number 2, 4 and 6 cylinders. Remember, this is before boring.. this block was scheduled to be bored to 4.350 (+.038) so we would be taking an additional .019 thousands off each side.. that would leave us with a very unacceptable .055 thick cylinder wall, at the thinnest point on number 6.

Needless to say, this block was set aside, and is holding the concrete floor down in the shop, as I type this.

Now, here is the picture of the actual block used to build this customer's motor, in the assembly room. You will note that the lifter bores look about the same as the first block. 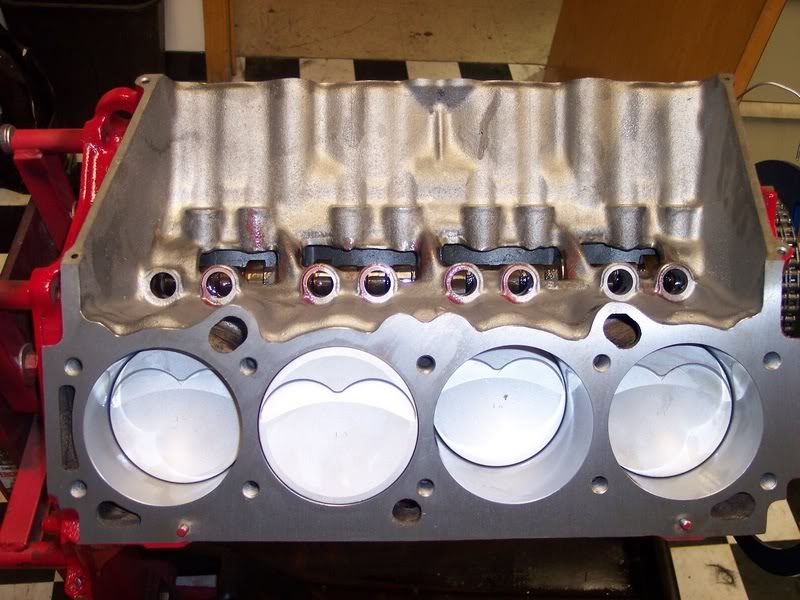 But look at the sonic check worksheet.. 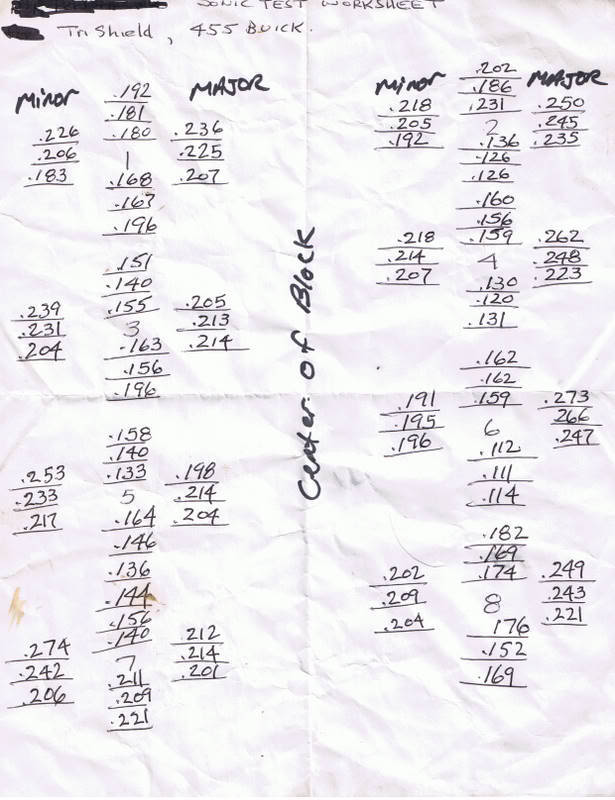 This block is shifted, (as they virtually all are) but the major thrust sides are considerably thicker than the first block, and there is no point under .100
before boring.

This block went on to have a very streetable build, at over 550 HP.


So as you see, year of the block, as well as visual inspection does not always tell the whole story, and it's well worth the extra $75 or so to sonic check every 455, before you invest a lot of money in it.

And building a high HP or stroker motor, makes this even more important.

In later posts, we will discuss grouting the water passages for cylinder stability, the pros and cons.

Too thin a cylinder wall has a number of potential results.

1. Poor ring seal- the cylinder actually distorts in use.
2. Inability to re-hone the cylinder easily during a motor freshen up.. so instead a just a light hone during a race motor freshen, you have have to take .002 or so out of it.. and either run bigger clearances, or in some cases, order a new set of custom pistons. A good Buick bore will hone up nicely with just a few swipes of the hone, with an overall size increase of just .0003-.0005. This is important for race motors that come apart often for freshening up. A hip engine builder will run the pistons down to the very minimum allowed clearance on the first build, to allow room for later freshen hones. But if the block takes .002 or more to get it straight again, then that doesn't work well. This is mostly a concern for a race engine, but should be considered for all performance buildups.
3. Cracking- This is the worst, and potentially most severe side affect. If you get lucky, it will just crack and leak water, and start blowing smoke.. or it could lead to total engine failure.

The overheating issue is regard to cylinder wall thickness has been overblown in my opinion. Yes, a thinner wall will be a less efficient heat sink, but in reality, we fill these blocks in some applications to 1" below the decks, or sometimes all the way up, which effectively makes the cylinder wall transfer very little heat to the cooling system.. I have built quite a few of these motors for street and strip, and none have had a water temp problem.

I believe that most likely, this urban lore about "too thin a cylinder walls and overheating" came from guys who built a high performance motor, which, as we know is actually a heat pump, and then installed it in a car that had a marginal cooling system. Maybe it just got by removing the heat from a 350 HP motor, but could not handle the heat from another 100 or so HP. This would account for the "I just built the engine, and now it overheats, and it didn't before, must be too thin cylinder walls" syndrome.

And yes, a sonic checker is standard equipment in any full service machine shop.

IN any build, you would like to see as much as possible, but a benchmark for a high perf build for me is .140+ on the pin sides.

But the reality is that you will look a long time for that block.. so often times you have to settle for one that has maybe just one or two holes with around .100 in that location, as long as the major thrust side looks good. I don't like to see than tht .100 anywhere, before boring.

The sheet I posted is an example of this, and that motor made 550+ HP, and is in use today 3+ years after it was built.

Rod upgrade was scheduled for the next freshen, but it never made it.

Was a good motor, a little shy on the power compared to the nearly identical 464 that followed it, but that's to be expected.