since its the off-season on this side of the world, i decided to go ahead and start the re buildup of my camaro ( that and the stang and the scout

) and document it here so i can keep a record of what i done.

my last season racing was horrible for this car, tons of issues that had to be tracked down and broken parts , so i decided to kinda start over.

i've decided to upgrade / redo alot of things ( some i already started ), so i'll post pics as i go .

here's how the car started 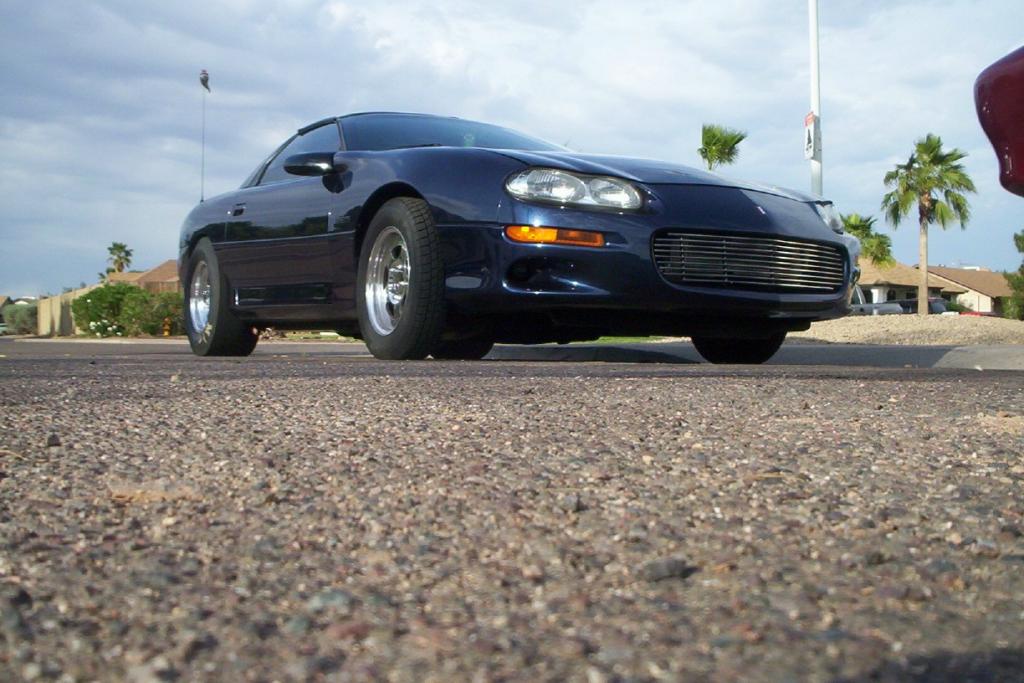 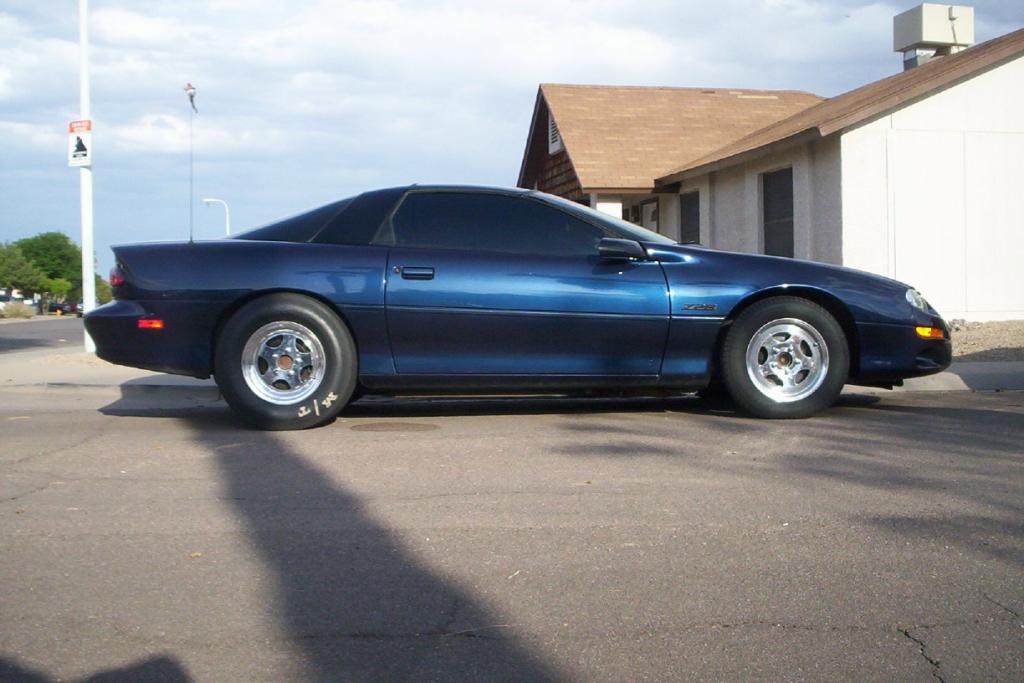 here's what i'm planing on doing:

like i said, some stuff ( not much) , i already did , the others i'm just waiting for parts to show up.

i got a set of aerospace brakes for all four corners , that and with the abs delete dropped about 65 lbs if i remeber correctly off the nose. 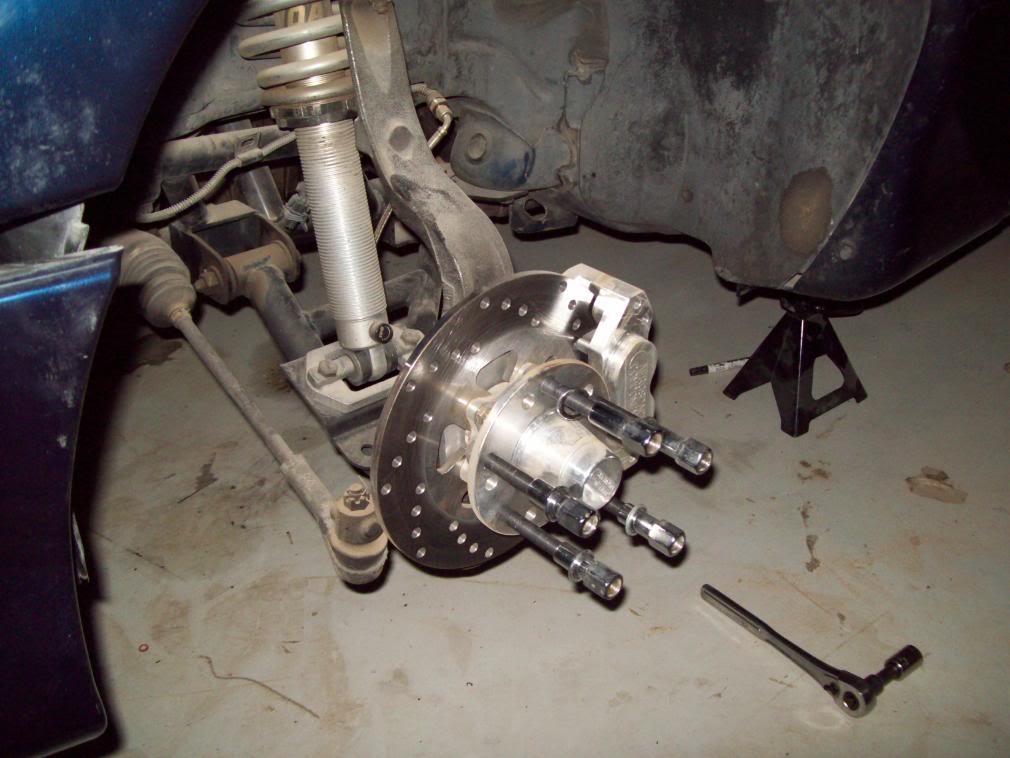 i also ripped and redid the electrical wiring from bumper to bumper , in the bottom of the pic you can see the "nerve center" of the car , all electrical stuff goes there 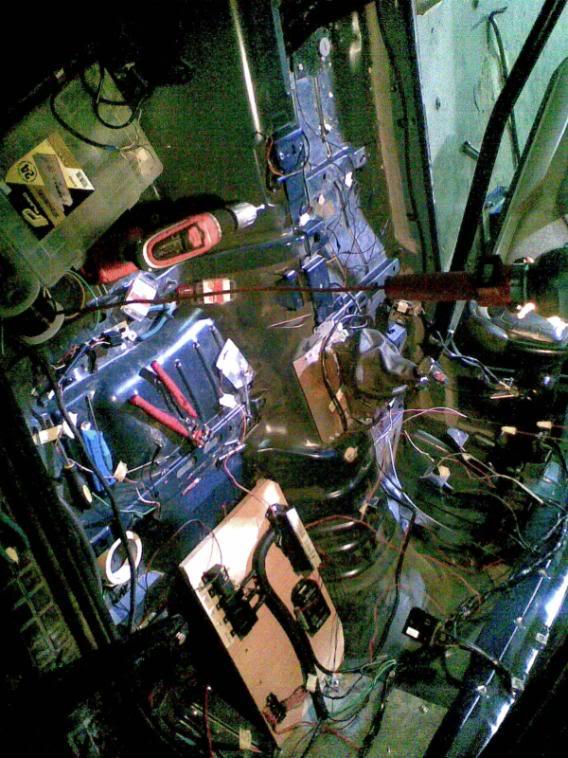 i also gutted the dash and removed the carpeting for loosing more weight. 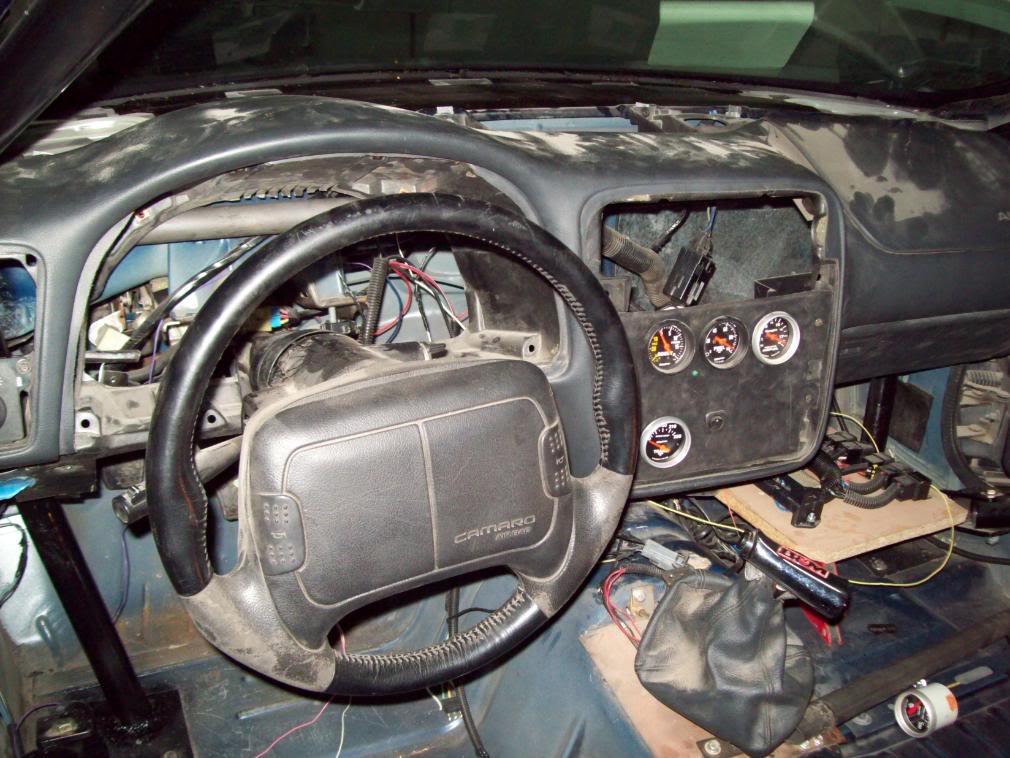 also finished up the roll cage conversion , now that was a pain in the ass , definatly have some one do it for you if you can! 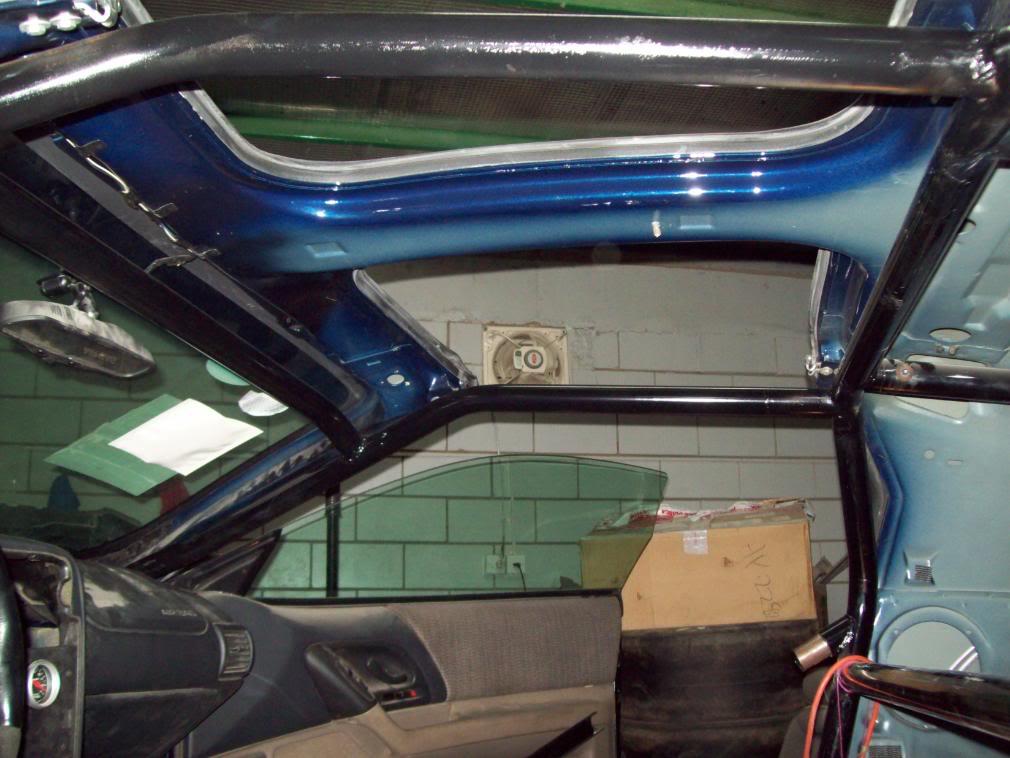 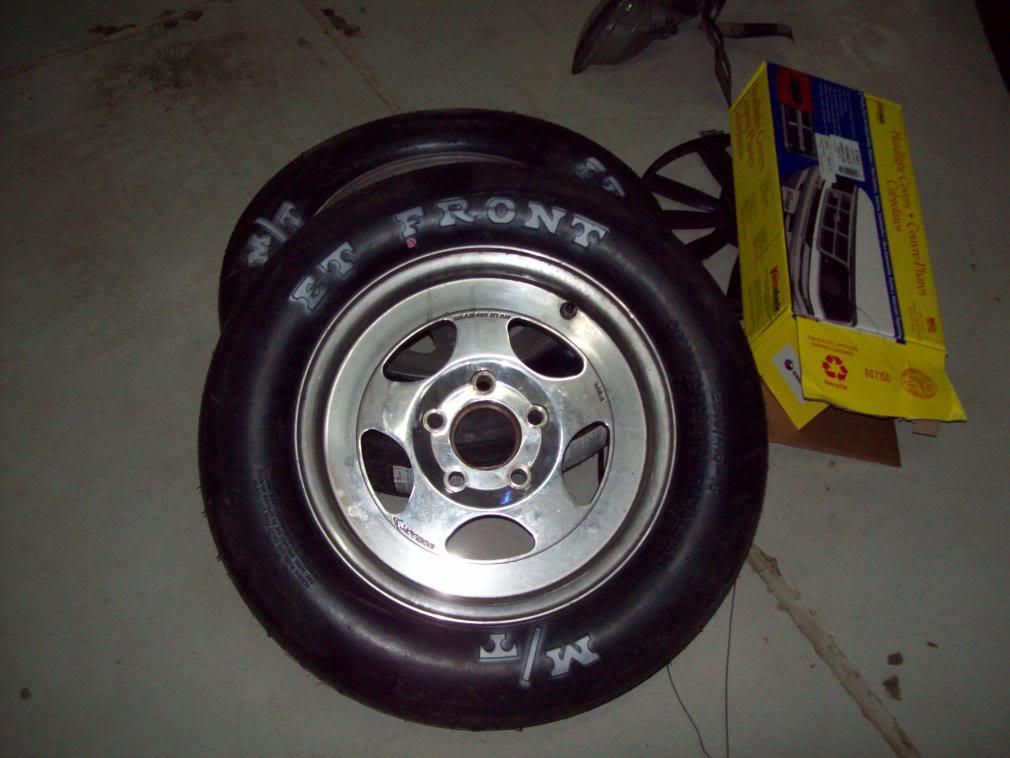 here's how the guages came out : 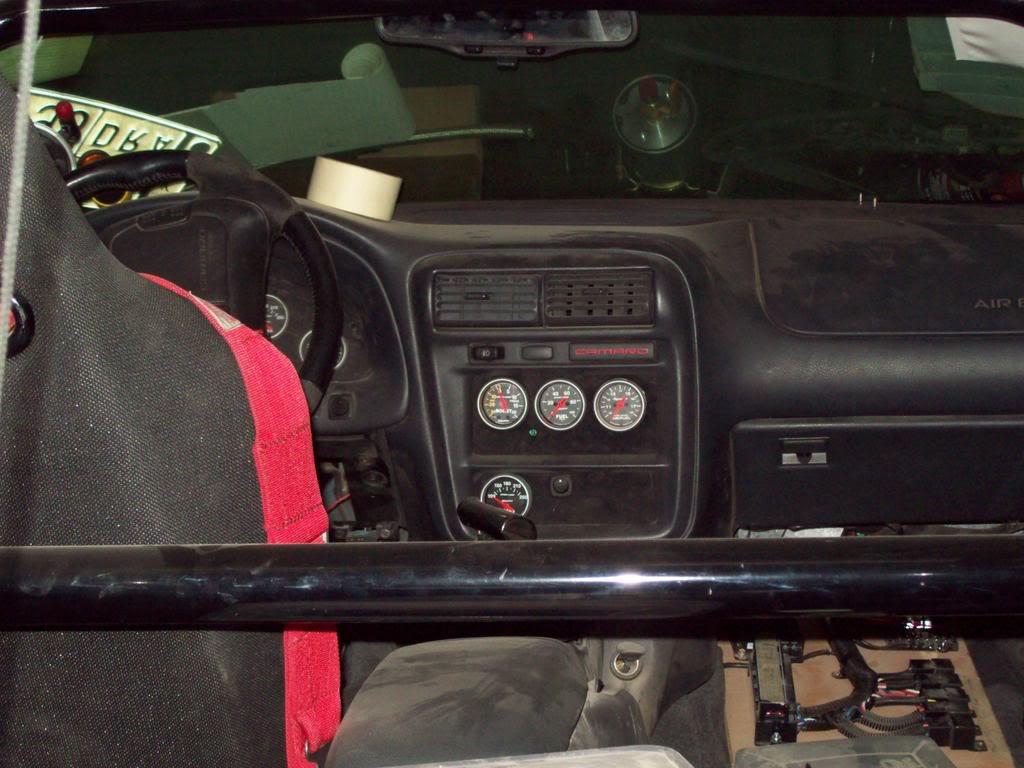 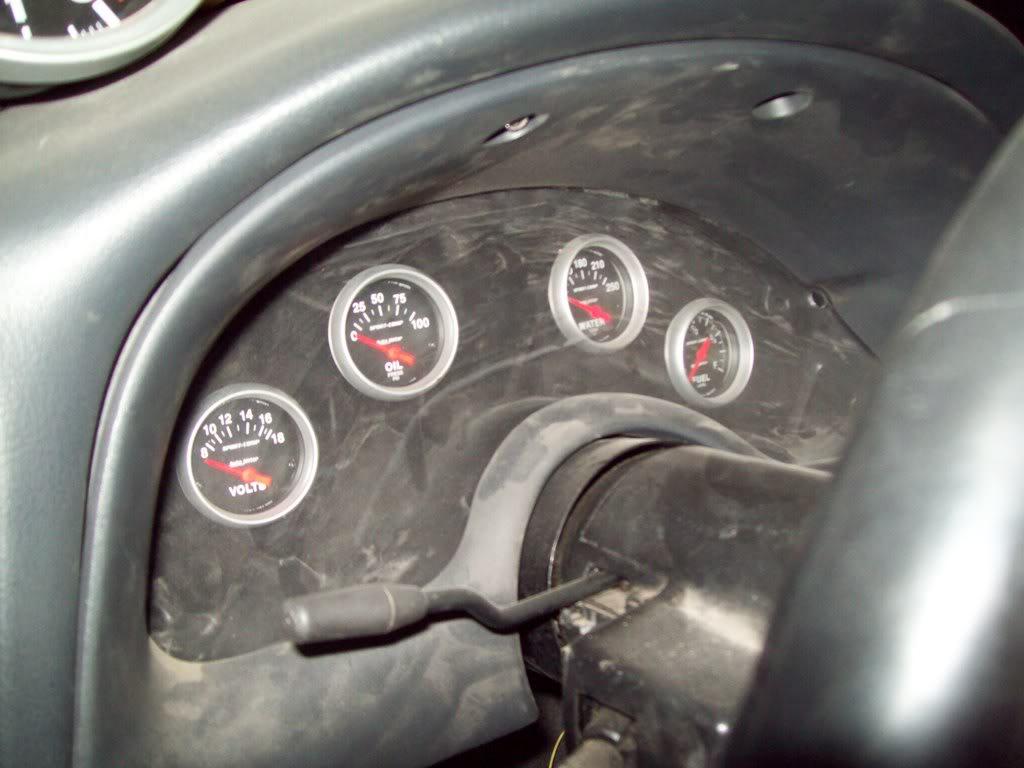 i also finished relocating a few things: i relocated my water injection pump and tank for better access to the location you see here , you can also see the remote battery disconnect solenoid . 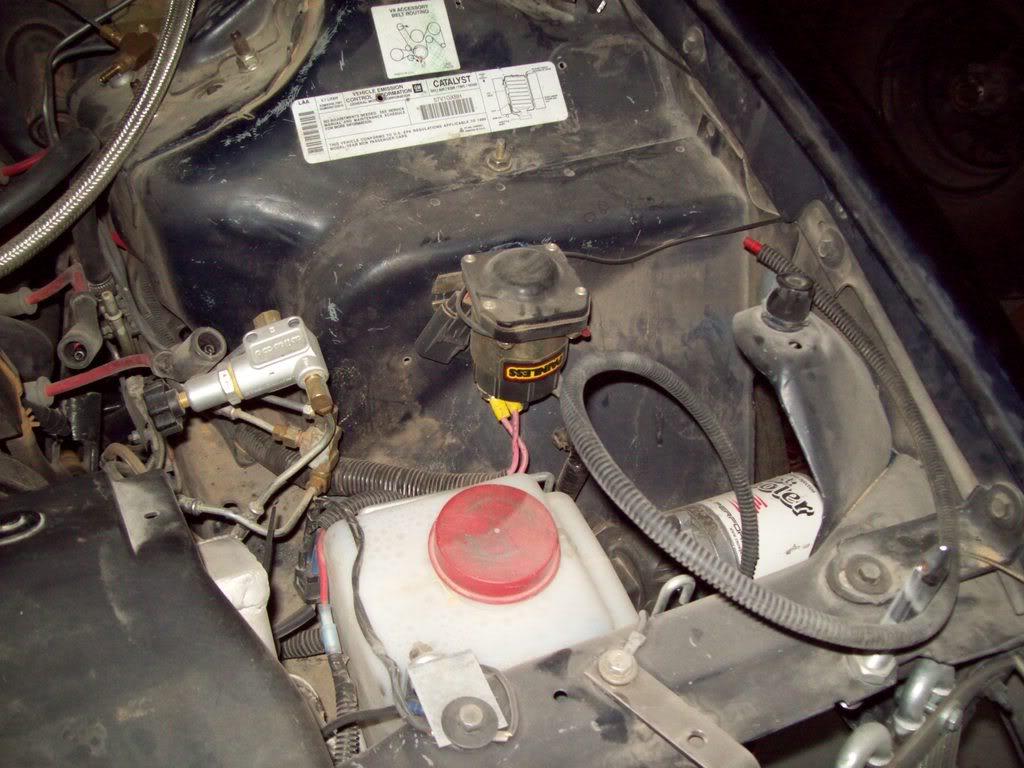 i also removed the factory radiator puke tank and relocated my battery to the trunk to make room for the new puke tank and Accusump. 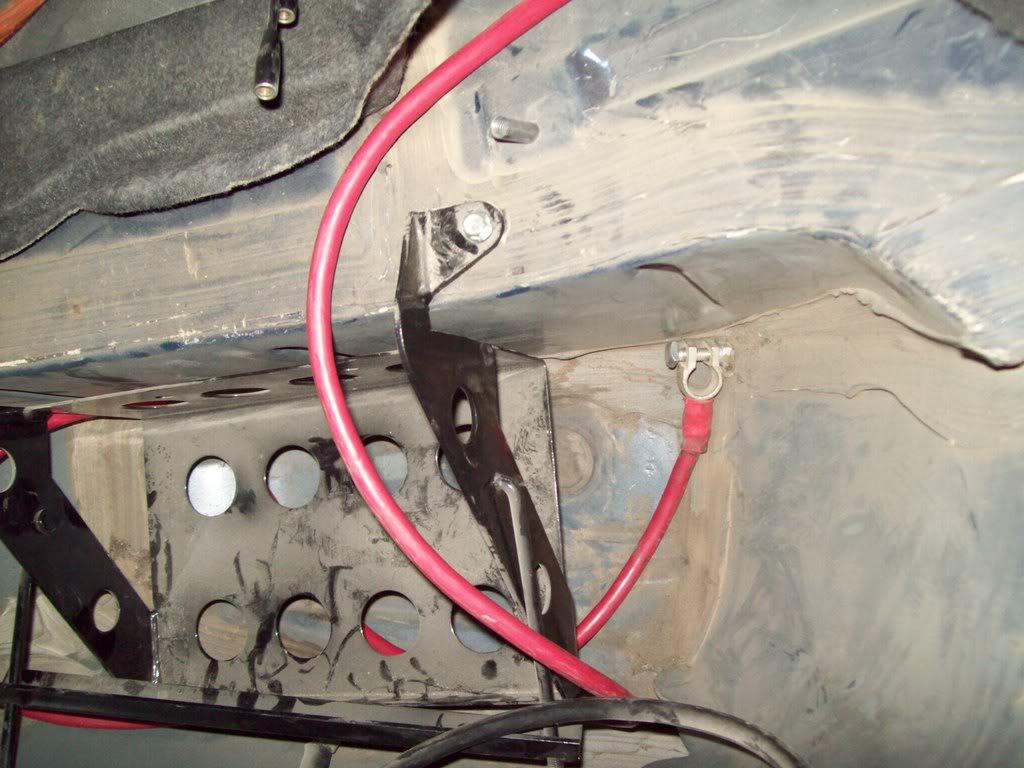 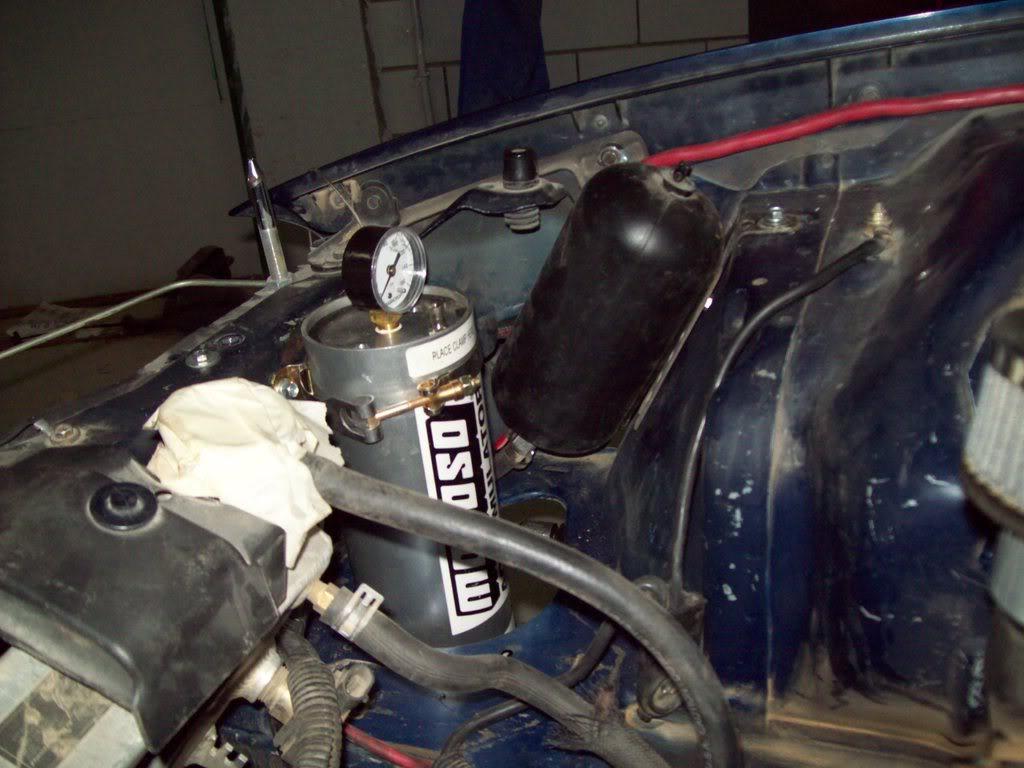 i still need to plumb the accusump , I'm just waiting for a few fittings that should be here soon

i also removed the headlights ( ahhh, the things we do to loose weight

) and covered up the hole they left with black headlight covers. i had to fab a brace to hold them from caving in at high speed. their bottoms are screwed to the front bumper.
i'll snap a pic of that tomorrow , but you can see part of the brace in the last pic.

when i had the heads , the only option was either the truck intake or the l76. i have the carb intake now which should flow pretty well. i totally agree with you , thicker heads are a definite plus , but for now, i'll stick with the l98's till i get a 6 bolt block

it was washed about two weeks ago ( the car is garage kept) before i went to the track . but on the way there i was driving for 4 hours through a dust storm, and on the way back it was a SAND storm , there was san in every nook and cranny in that car !

this is the crap i had to deal with for 8 hours ! and to make it even more fun :35 mph cross winds ! 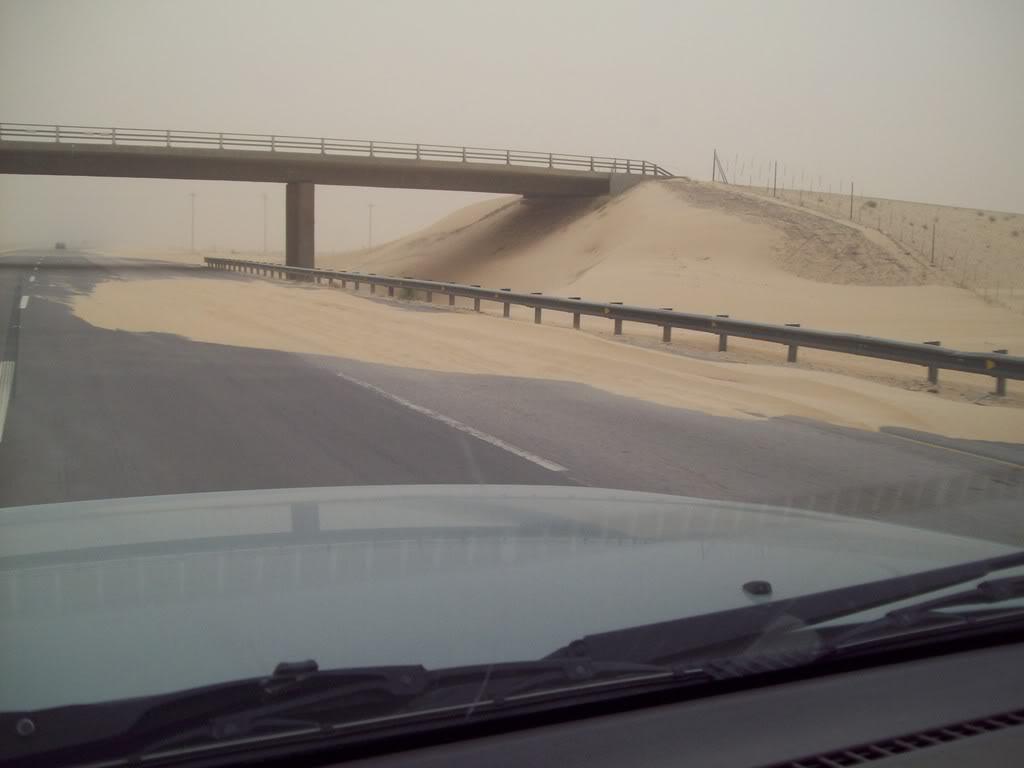 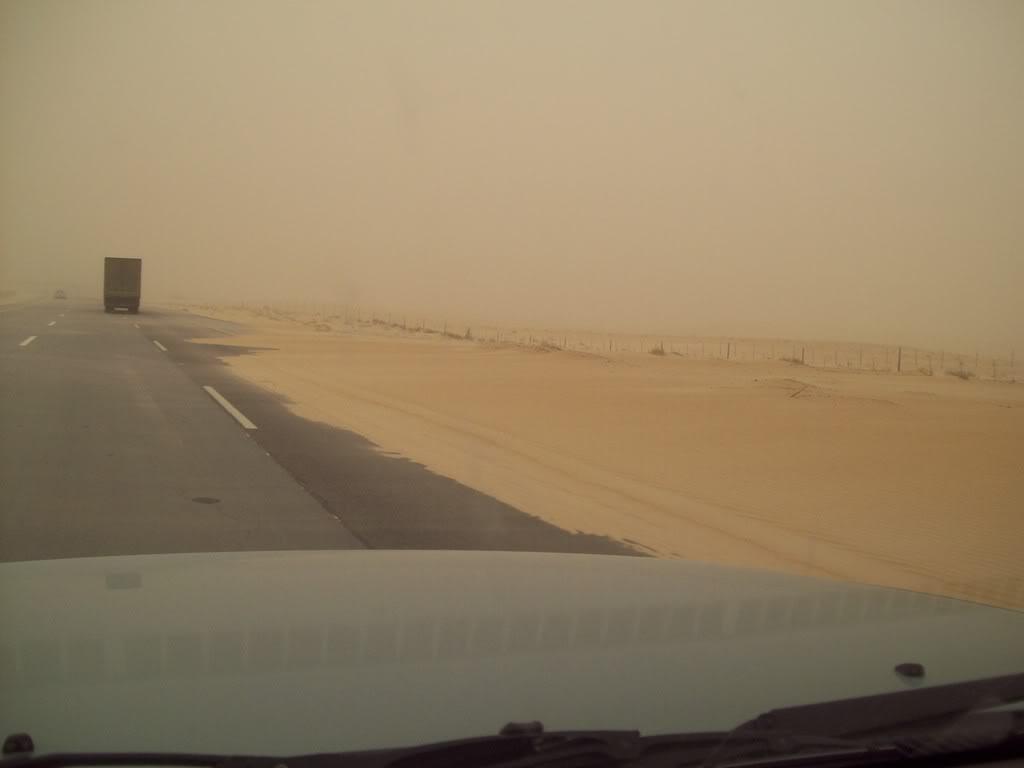 i live in riyadh, saudi arabia. i am originally from there and live there perminantly. the track you see is actually in the neighboring country of bahrain, hence the 250 mile trip each way to the track. you guys should see that track ! its the same track they hold the F1 races at and to say its a first class facility is an understatement!

qwiketz, i really don't think I'm getting belt slip ( i also put a cog drive setup on the car to verify - look for the pics soon). the car dynoed about 890 rwhp when i was in the states on pump gas with 408 , i'll dig up the video and post it.

if you are wondering about the boost numbers , you got to figure in the head flow , big headers , and monster cam the car has.

i also installed the carb intake and the elbow, now i need to fab up a tube from the intercooler to the TB. 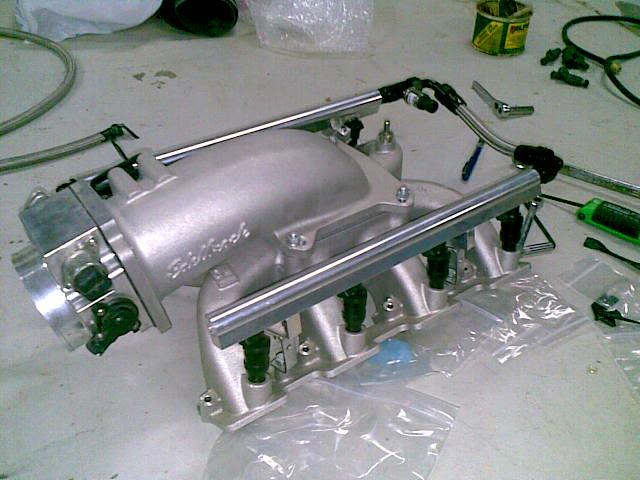 you can see how this elbow clears the cowl and the plastic stuff on top of it . an added benifit of this elbow is that it has a wing type of thingy where it bends to help distribute the air better in the intake ( i'll try to get a pic of that soon) 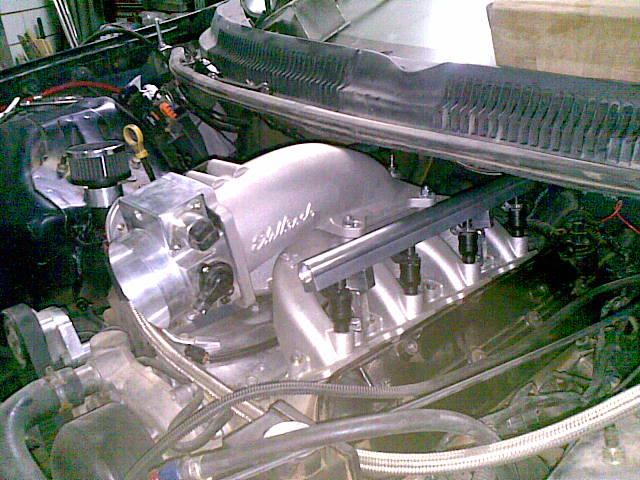 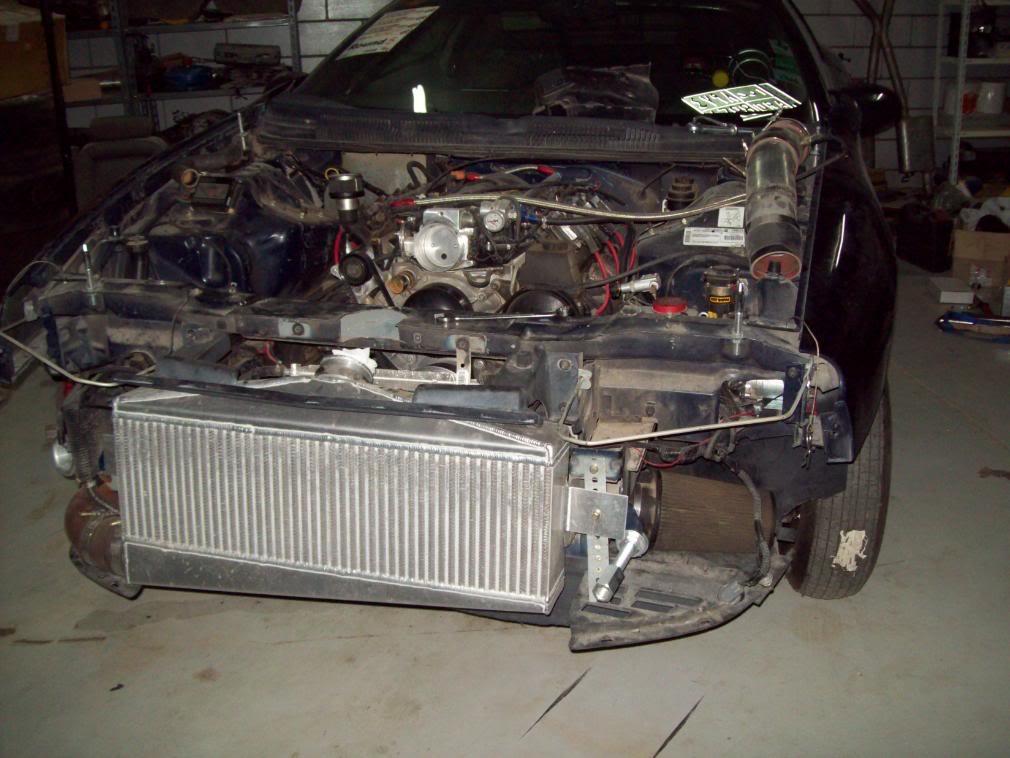 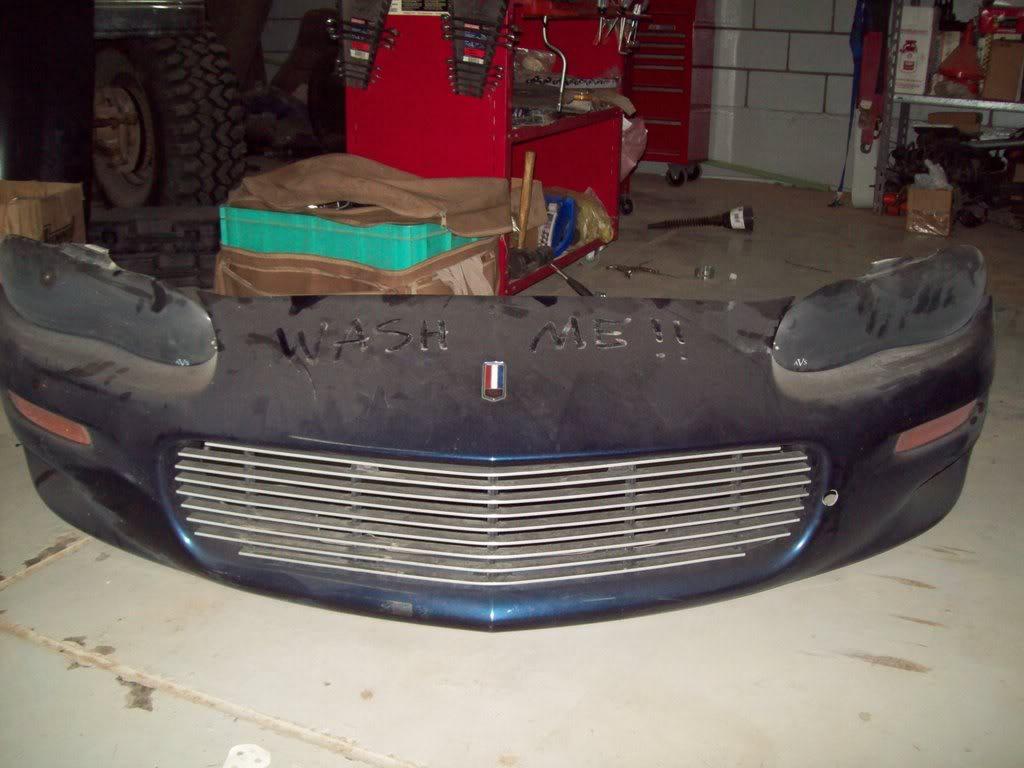 ) i relocated my methanol injection controller to inside the car. tomorrow i should be getting some stuff in from summit so i can proceed with a bunch of stuff like plumbing in the accusump and other doodads.

i already installed the cog drive i made ( for the last round ) without the ATI super pulley just to see if all my work was properly lined up and working good ( well it worked great , until i hit the revlimiter a few times and sheared the teeth off the cog belt - as expected