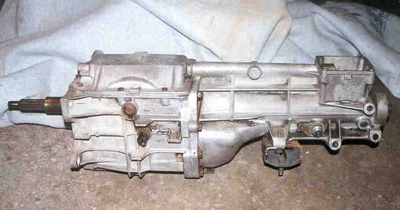 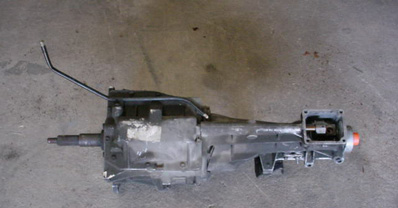 The T5 is a popular transmission made by borg warner in the 1980s. It was used on the 83-92 Firebird/Camaro.
For the swap to work with your existing clutch, you need to get a transmission out of a V8 fbody with the 26 spline input shaft.
The T5 transmission is similar length as your current 4+3 transmission, and the yoke is the same spline count (27) so you
will use your existing: Yoke, bellhousing, clutch, hydraulics.

The T5 transmission is designed to be mounted in a Fbody at a 18* angle counter clockwise, and is mounted using a horizontal
cross-member, and torque arm. Due to these case differences in the tailshaft section, an adapter is required to bolt the
T5 to the Corvette CBEAM. This adapter has been engineered by PRO STREET (now Tommy's Speed Shop) and is available for $175 shipped. 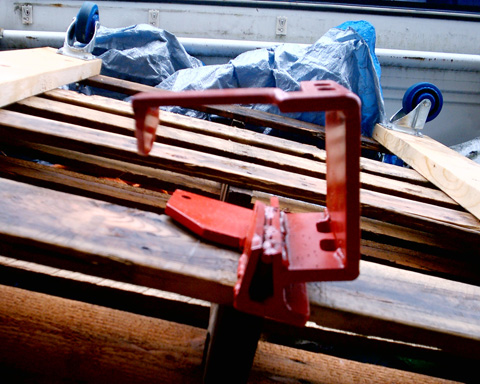 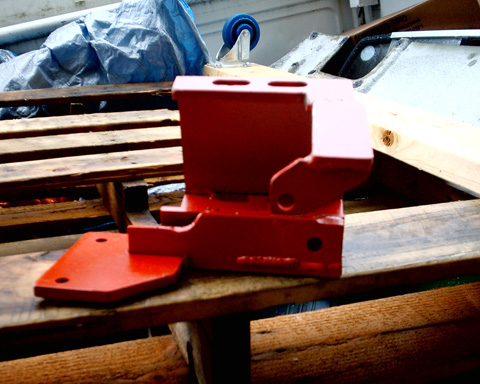 Issues that may turn you off to the swap:

When installing the transmission in a Corvette, the shifter mounting flange will be 'straight up' and horizontal with the vehicle.
The shifter location is dead center of the transmission and forward thus requiring some modifications to the shifter assembly to retain
correct shifter position.

This modification required welding an adapter to the shifter, effectively changing the location. The side effect
of this is the shifter will slightly fall in 2nd gear, and slightly rise in 5th gear. Additionally, the shifter
base will contact the shifter plate under the forward cup-holder, therefor the cup holder will need to be cut
on the bottom, rendering it useless.

Your T5 needs to have the appropriate Drive/Driven gears as well as
VSS sender for your Dash/ECM to read. Most 3.23+ V8 T5's have a 7-tooth drive
gear #14071731 (PURPLE). You will need to obtain the correct DRIVEN gear, and VSS. 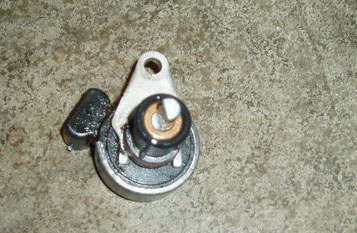 Drive and driven gears look like this. Notice the plastic white DRIVEN gear
is on a metal shaft. Discard this shaft. When you purchase a DRIVEN gear, make
sure it is not a 1pc plastic gear with plastic shaft. If you look at the VSS
above, you will see the shaft is not removeable so the gear MUST slide over
the shaft in the VSS. The 1pc plastic gears with shaft are for CABLE DRIVEN
SPEEDOS! 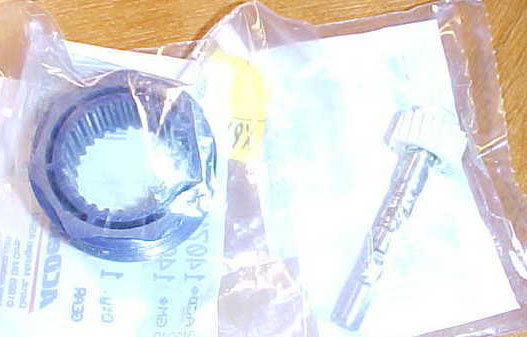 Again, if the gear cannot come off the shaft, and look like the pic below it is the WRONG DRIVEN GEAR

This should put the stick straight up in the normal Corvette location.

1) Measure the distance between the front and rear holes on the transmission
2) Drill out the new front 2 holes
3) Follow the instructions above to change the offset. 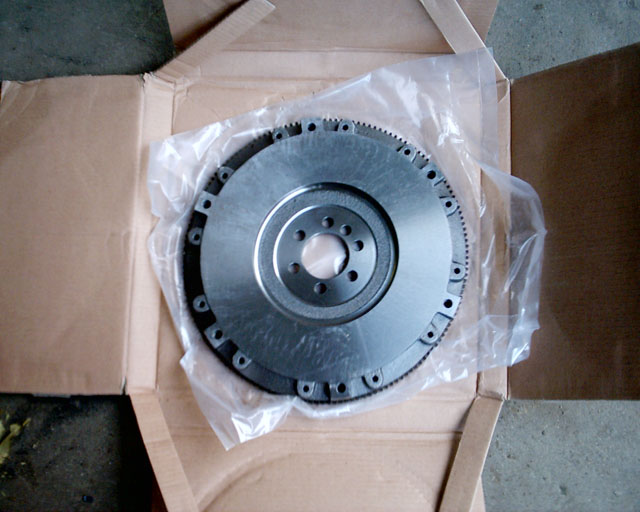 I used a brand new flywheel for my swap. 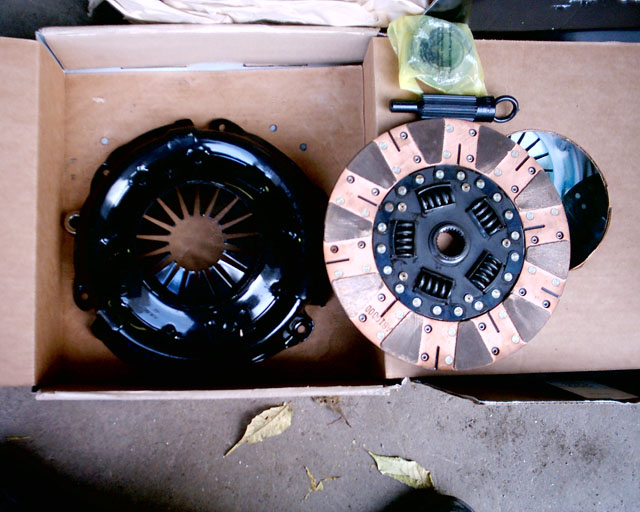 Let's start with some new parts. Or if your clutch is good, skip to "CBEAM Adapter Installation".

Install a new TIMKEN pilot bearing instead of a brass bushing

Install the clutch and pressure plate, torque to 34lbs

Install the bell housing and torque to 34lbs 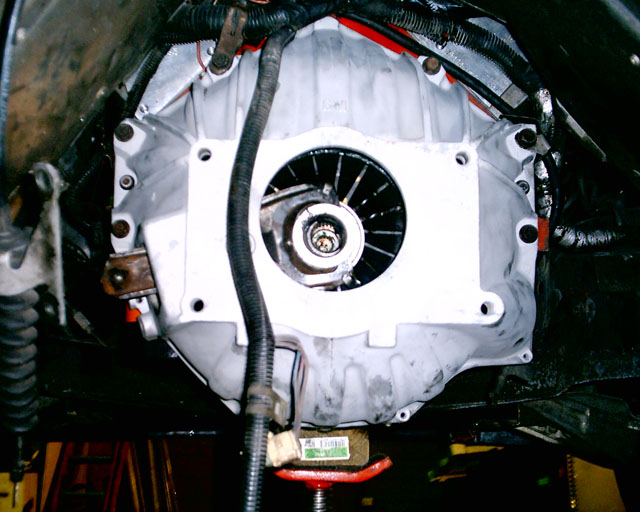 Next, Install the CBEAM adapter bracket to the T5 tailshaft with the supplied hardware: 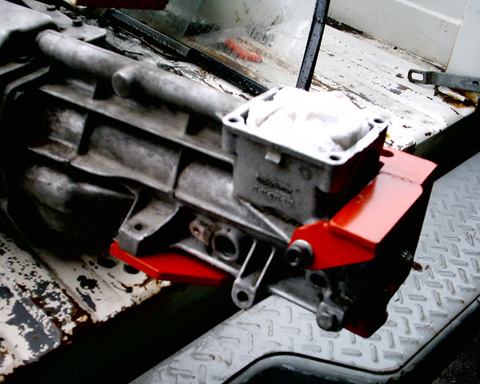 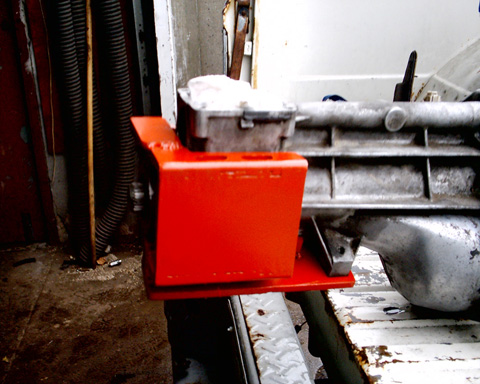 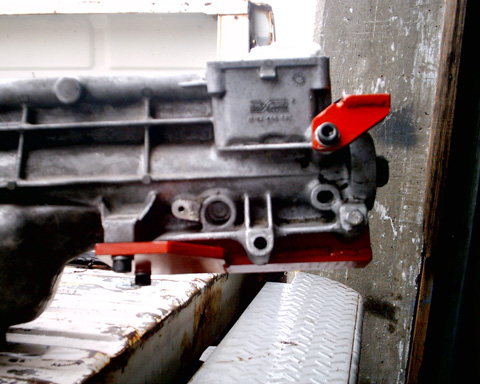 Your cbeam adapter should be installed like this using supplied hardware. 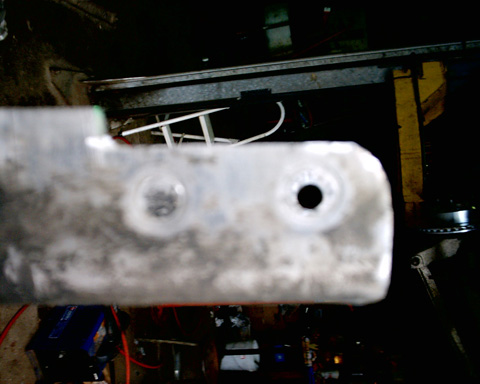 Cut a hole in your floor, PATCH THE REST!

Using these pictures as a guide, ensure a hole is cut into the floor section over the tunnel. Make sure any shifter or related components are removed: 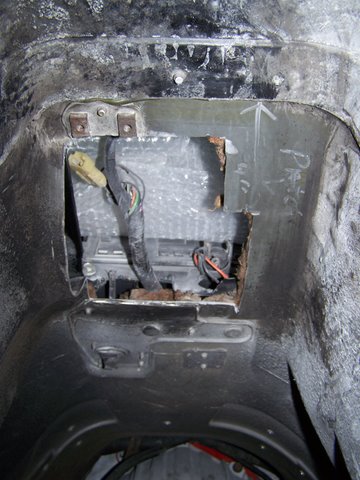 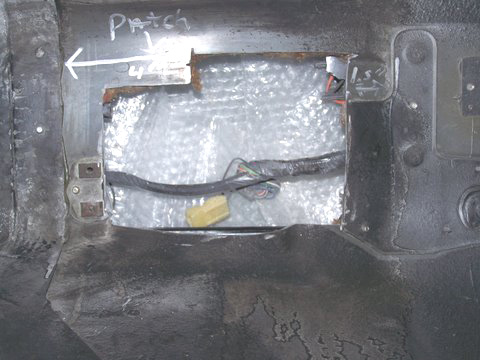 The following picture illustrates the measurements of where the hole should be. The measurements are from the seat-mounting strap forward. My vehicle was an automatic, and had a hump for the shifter which I removed. I cut the hump out which game me a rectangle hole in the floor. I then had to fill in the green area, leaving a 5.5" wide by 5" long square hole. 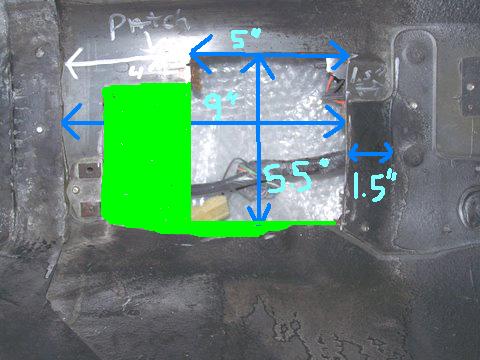 Now, Lift the T5 up into place and slide forward into the clutch, until the transmission stops

Have a friend step on the clutch pedal while your pushing the transmission forward, until it seats in the bearing.

If you do not have the hydraulics setup, you can pry the fork to the REAR simulating clutch action, to seat the input

shaft into the pilot bearing.

Align the transmission, and install all four bolts

I've found this next step is much easier if you disconnect the parking brake cable that goes from left to right in the rear.

Next, slide the cbeam over the adapter, and forward (to clear the differential)

Now you're going to want to jack the transmission all the way up, then slide the cbeam back to bolt it in.

Install all four cbeam bolts, and the driveshaft. 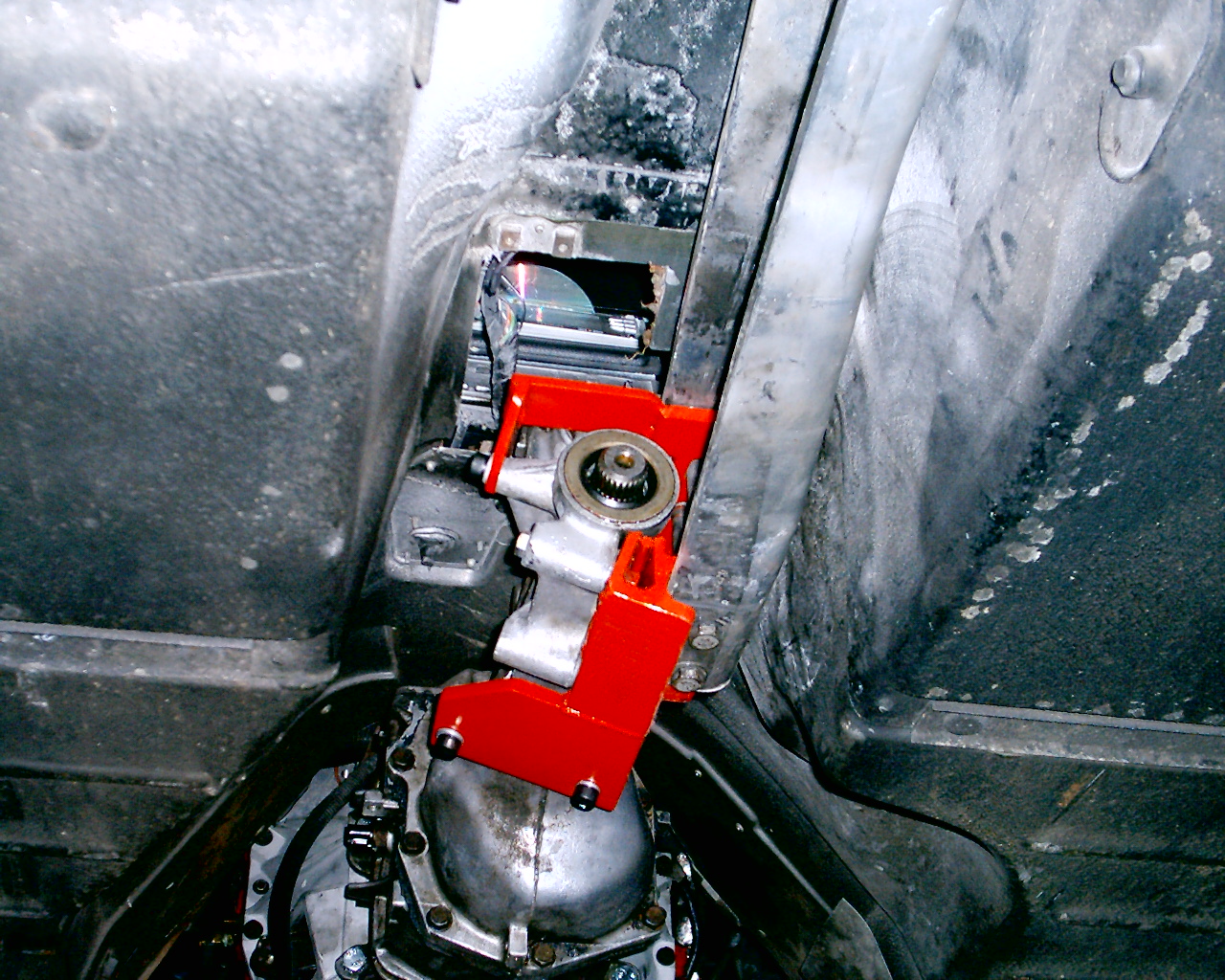 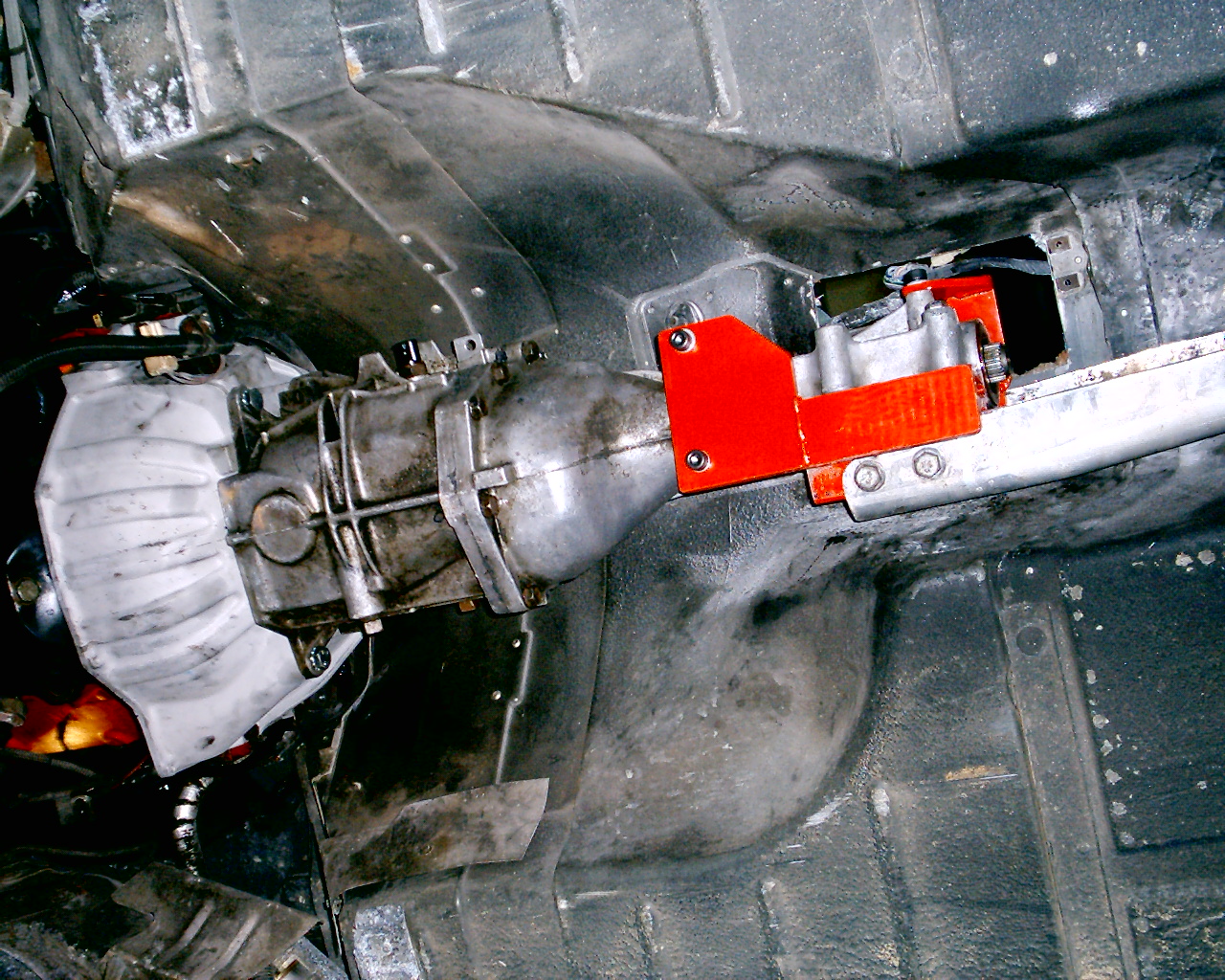 If swapping from an automatic, you will need to send the green/red wires down to the reverse light switch

on the transmission. You will need to tie the purple/yellow wires to the clutch switch. 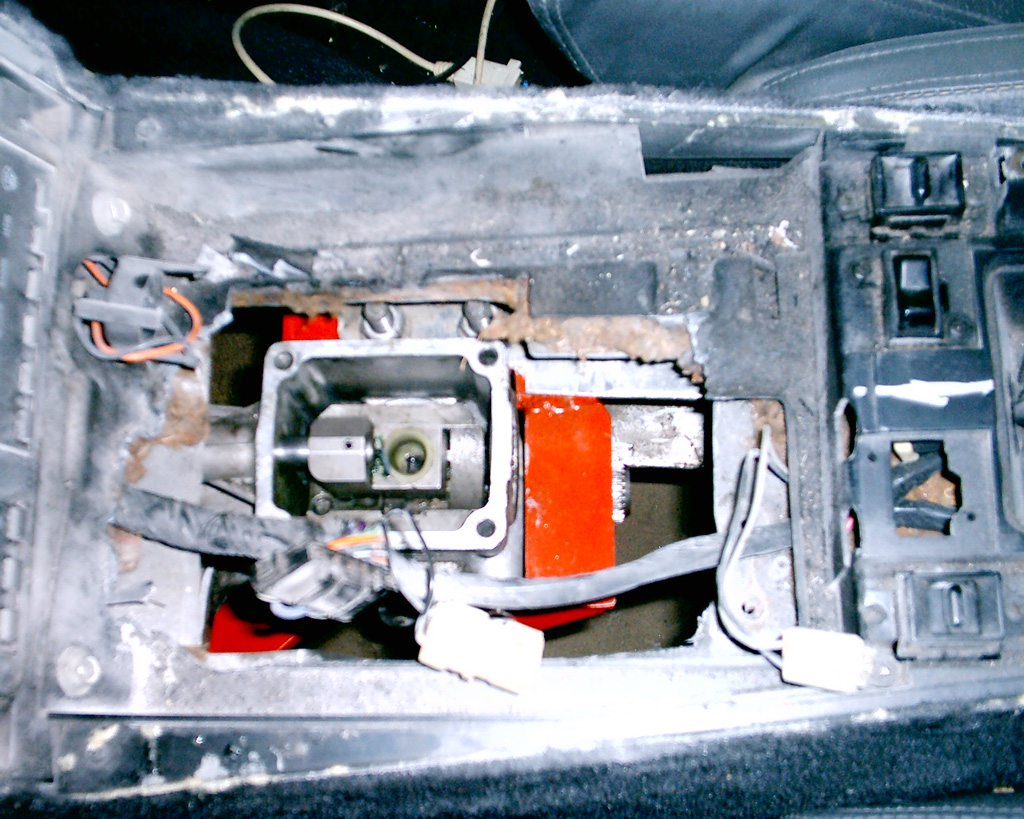