1. Pry the plastic shift pattern piece from the top of the shift knob with a small screwdriver.

4. The bottom of the shift boot is attached to an oval-shaped plastic ring. The ring is elastic and you can simply pull it out. To do that, pull on the shift boot towards the shift lever and part of the ring will come out. Do the same around the circumference of the ring to get the whole boot out.

5. Take the boot off the shaft completely. 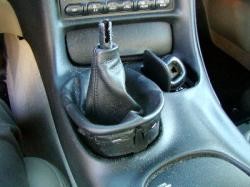 6. The stock shift boot is attached to the ring by staples and some  glue. Remove the stamples and pull the old boot off the ring. Clean any residue. 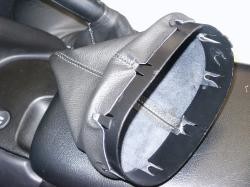 If you are installing your boor with a replacement RedlineGoods metal bracket, instead of glueing the boot to the plastic ring, fold the boot around the bracket as shown here. Duct tape will do and will hold up just fine. Alternatively use glue if you prefer.

8. Remove the top trim piece from the stock boot and install it into the new one (it's really obvious). Alternatively, you can replace it with a zip-tie: turn the boot inside-out, slide it onto the shifter thin (top) end first, attach with a zip-tie.

9. Reverse steps above to reinstall: first push the plastic ring with the new boot back in, then reinstall the shift knob, the pin and the shift pattern. 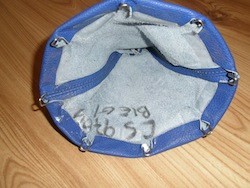 1. Convertible owners only. Remove the waterfall. There are 4 size 15 torx screws: 2 along the top, one on either side. Pull the waterfall directly up. 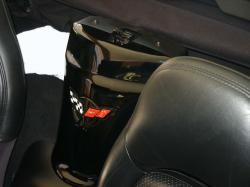 2. Open the armrest cover and pry off the two oval-shaped covers located towards the rear.

Use a small screwdriver, then remove the two 10mm nuts located below the covers. 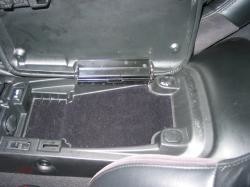 3. Pry out the trim plate next to the armrest cover (the one with the A/H button and other indicators, year dependant). Pull it up starting from the armrest side. Might need a small screwdriver to pry it out, but we did it just fine with bare hands.

4. Disconnect all the electrical plugs underneath it.

6. There is still an electrical plug you need to remove. Lift the console up and back slightly and disconnect the plug. Remove the console completely. 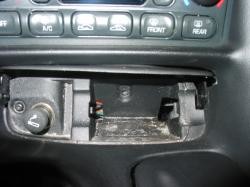 8. Remove the little trim piece next to the ignition key (pry it off with a small screwdriver from below). 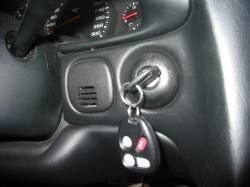 10. Remove the key from the ignition (if there's still one) and remove the center console. It will simply slide towards the rear of the car. Move it several inches first and remove the cigarette lighter connection that will be exposed now.

In a manual car, put the gear into 2,4 or 6 to make it easier. In an automatic, put the key to on (NOT START) and switch to low gear. After removing the console, switch back to park and remove the key. 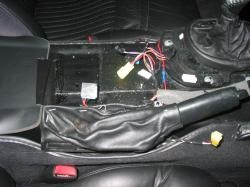 12. Install the new ebrake boot instead of the old one. Do not mind the metal frame embedded in the old boot, you will not need it and it will look just as good.

13. Reinstall the center console in the reverse order of removing it. UNLESS you are installing an automatic shift boot, in that case proceed withour reinstalling it.

1. If you haven't done so already, remove the center console by following steps for installing the ebrake boot (1-10 inclusive).

2. This is what your car should look like at this point. 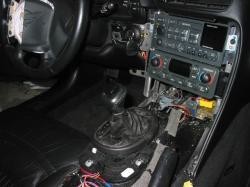 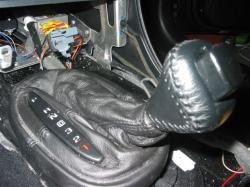 4. Remove the shift boot. Simply pull it off the frame by stretching the elastic. While doing so, you will notice the boot is still held down by the plastic frame which surrounds the gear display panel. Do not use force and do not pull on the boot just yet. 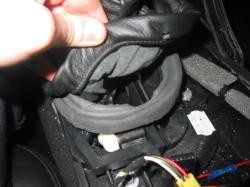 5. The plastic frame in question has two tabs at the ends of it's longer side. The tabs are held behind two small teeth. Use small screwdrivers to widen the teeth on one side and pull the tab up. You will notice the second tab will just slide away from the teeth that are holding it as you remove the boot.

6. Remove the shift boot completely (you will need to cut off the factory zip-tie holding the top of it to the shift lever) and remove the small plastic frame from it. Now comes the hard part. You need to glue the frame ito the new boot. It's best achieved by using "Automotive GOOP" or any similar glue (epoxy-based) AND by turning the boot inside-out partly as this picture suggests.

TAKE YOUR TIME! First make sure you understand which way does the frame go into the boot correctly, so that you don't have to do it twice. Make sure the leather is flush against the frame and even with it's edges. Start on one side, glue a bit and let it dry. Then move to the next section of the frame. 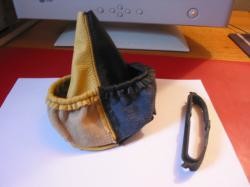 7. Reinstallation is the reverse order of removal. Almost. :) First mount the top of the boot with a zip-tie (you will need to turn the boot inside-out and slide in onto the lever top-first), then mount the bottom (first the plastic frame around the display indicator and into the tabs, then the elastic. Once it look like on this picture, reinstall the shift knob and the retainer staple. Then reverse the steps of removing the center console described in installing the e-brake boot (above) to reinstall the center tunnel. 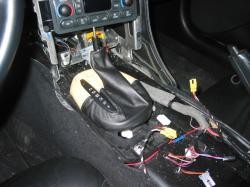