Difficulty of Installation (1 as easiest 10 as most difficult): 3.5

Explanation of Mod: Suspension lowering springs have many functions, most of all, they lower the cars center of gravity decreasing body roll which will increase handling capability. Aftermarket lowering springs are genrally shorter, and much more stiff compared to the stock springs. Lowering also gives the Neon a more aggressive stance and cleaner look by eliminating the "4x4" stance stock springs provide Be warned however, that installing lowering springs of any kind onto stock struts will increase stress on the strut shaft causing premature failure of the strut.

Difficulty of Installation (1 as easiest 10 as most difficult): 3.5

**Removal and Installation Of Struts**

4. Remove the screw securing the ground strap to the rear of the strut.

5. If the vehicle is equipped with Antilock brakes (ABS) , remove the screw securing the ABS wheel speed sensor to the rear of the strut.

CAUTION: The strut assembly-to-steering knuckle attaching bolts are serrated and must not be turned during removal. Hold the bolts stationary in the steering knuckle while removing the nuts, then tap the bolts out using a pin punch.

6. Remove the two bolts attaching the strut to the steering knuckle.

7. Lower the vehicle just enough to open the hood, but without letting the tires touch the floor.

8. Remove the three nuts attaching the upper mount of the strut assembly to the vehicle's strut tower.

9. Remove the strut assembly from the vehicle.

The Strut assembly must be removed from the vehicle for it to be disassembled and assembled.

For the disassembly and assembly of the strut assembly, use strut spring compressor, or the equivalent, to compress the coil spring. Follow the manufacturer's instructions closely.

2. Position the spring compressors as shown below. 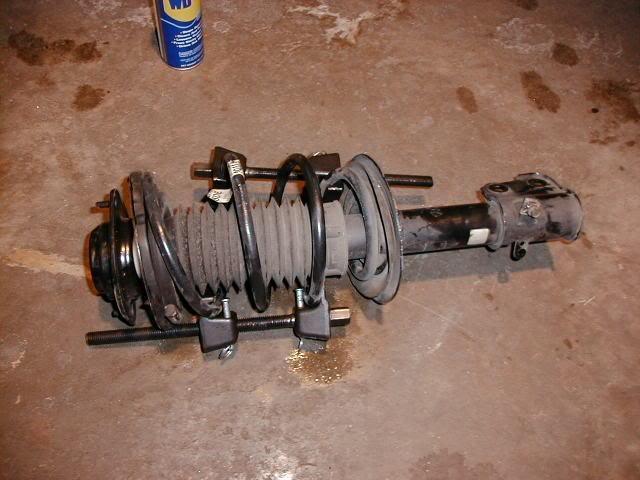 3. Compress the coil spring until all coil spring tension is removed from the upper mount. 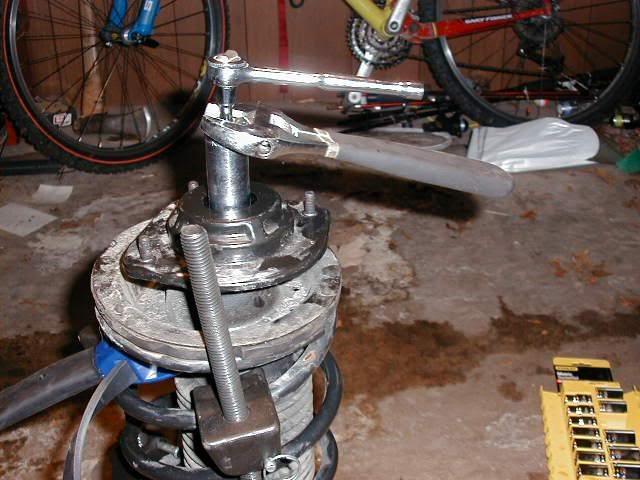 5. Remove the upper mount from the strut shaft.

7. Remove the dust shield, then the jounce bumper from the strut shaft by pulling each straight up.

For the disassembly and assembly of the strut assembly, use strut spring compressor, available for rental or purchase at any autoparts store.

1. Place the coil spring in the compressor following the manufacturers instructions. Before compressing the spring, rotate the spring so the end of the top coil is directly in the back as shown.

8. Install the upper spring seat and bearing on top of the coil spring. Position the notch formed into the edge of the upper seat straight out away from the compressor.

9. Install the strut upper mount over the strut shaft and onto the top of the upper spring seat and bearing.

13. Install the strut assembly on the vehicle.

2. Close the hood of the vehicle.

CAUTION: The strut assembly-to-steering knuckle attaching bolts are serrated and must not be turned during installation. Install the nuts while holding the bolts stationary in the steering knuckle.

3. Position the lower end of the strut assembly in line with the upper end of the steering knuckle and align the mounting holes. Install the two attaching bolts. The bolts should be installed with so that the nuts face towards the front of the vehicle once installed. Install the nuts. Holding the bolts in place tighten the nuts to a torque of 40 ft. lbs. plus an additional 90Ã‚Â°turn after the specified torque is met.

4. If the vehicle is equipped with Antilock brakes (ABS) , attach the ABS wheel speed sensor to the rear of the strut (rearward ear) using its mounting screw. Tighten the mounting screw to a torque of 120 inch lbs.

5. Attach the ground strap to the rear of the strut (forward ear) using its mounting screw. Tighten the mounting screw to a torque of 120 inch lbs.

6. Install the tire and wheel assembly. Install and tighten the wheel mounting nuts in proper sequence until all nuts are torqued to half specification. Repeat the tightening sequence to the full specified torque of 100 ft. lbs.