Last month my left front wheel bearing was making a metal to metal scraping noise when I had the wheel turned full lock. It was fine when I was driving straight but when I turn the wheel all the way left or right I could hear metal scraping on something. At first I though it was the break pads, but when I pulled off the wheel to have a look, no dice, break pads where fine. I noticed it when I was backing out of a parking stall one night. So not wanting to have the wheel come off at freeway speeds I decided to change it before something ugly happened.

That is when the "fun" began.

I had a look at what the Ferrari price was for a front wheel bearing. Now keep in mind that the 348 came with 2 different style bearings. The early cars 89-92 had a dual tapered ball bearing, and the later cars, '93/spider/special, had an all in one bearing-hub. Well my car is a '90 so it has the earlier version = BIG$$$MONEY. The later style bearing cost about $340-$360. Expensive yes, but not as bad as the one that went bad on my car. So how much for my bearing? How $1,100 dollars, for ONE. Yes kids, eleven hundred dollars for a single bearing. Do you think Ernie was going to pay that price? HA!!!!

Knowing what cheap bastards Ferrari are, I KNEW that there had to be another car that used the same bearing that we used. But which one???? Rather than spending the next half a year researching I decide to order the bearing from our friends on the other side of the Atlantic. Once I got them in hand I would research what car they came off of using the manufacture number on the bearing race. I ordered the bearings from Europe, paid the exchange rate, the bank charge for foreign currency, shipping, and saved myself SEVERAL hundreds of dollars.

A word of warning. If you buy bearings from out of the country you will have to deal with customs. I had no idea that there was some sort of restrictions placed on bearings entering the country. So one day I get a call informing me that the bearings are held up in customs and that I needed to fill out some paper work. When I asked why they said it was because of a "dumping law". A dumping law??? They didn't want people importing bearings that could be bought in the U.S. Excuse me.....it's a flipping EUROPEAN CAR! I have to import the bearings. Besides if Customs is soooooooo worried about dumping why don't the stop WalMart from buying just about everything you can thing of from China, instead of busting my balls when all I want to do is fix my car. Would you believe they wanted to know want kind of bearing it was? What were the dimensions? Was it a roller bearing? Was it tapered? Was it a ball bearing? Was it a needled bearing? Was is a roller bearing? Is the bearing sealed? What is the name of the manufacture? Where is the bearing manufactured? What is the address of the factory?
Fricking-AAAA!!! It's just a stupid wheel BEARING people.
So if ever you need to order bearings from out of the U.S. don't say I didn't warn you.

Well after dealing with that crap my bearings finally arrived at my door step, and I was able to fix my car and get it back on the road.

What follows is how I replaced the front wheel bearing on a pre-'92 348.

The first thing you will want to do is get the front of the car in the air. Chalk the rear wheels, jack the car up, support it with jackstands, and remove the front wheel. 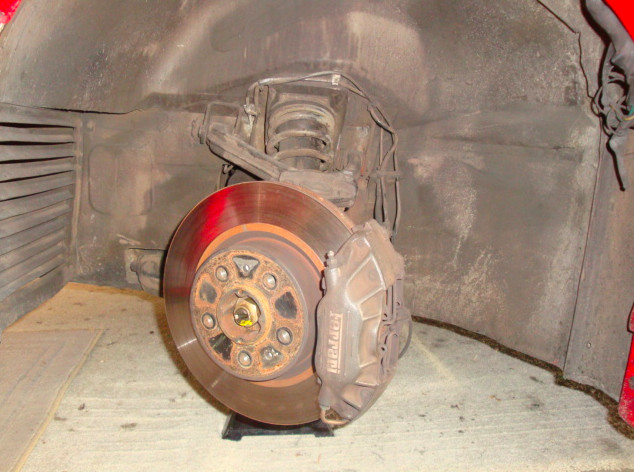 Next you will be removing the ABS sensor from the back of the hub.

Once I unscrewed it I used a standard screw driver to pop it out of the hole. 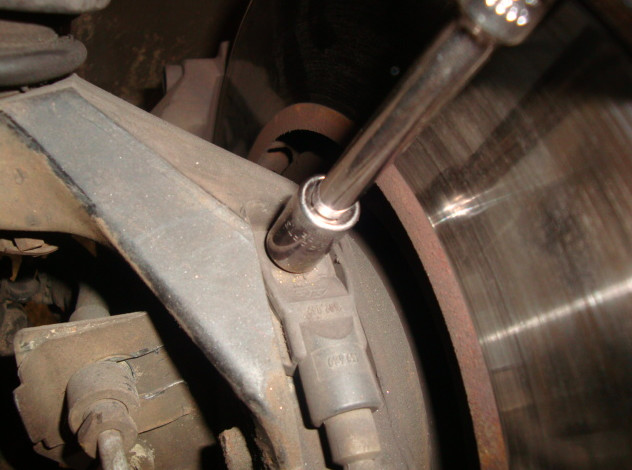 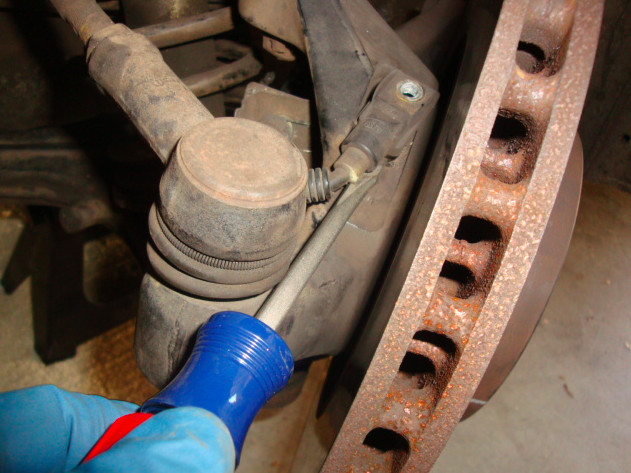 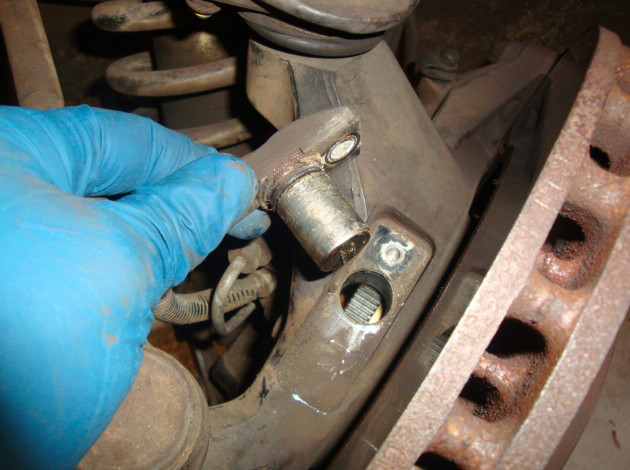 Disconnect the wire for the brake pad wear sensor. 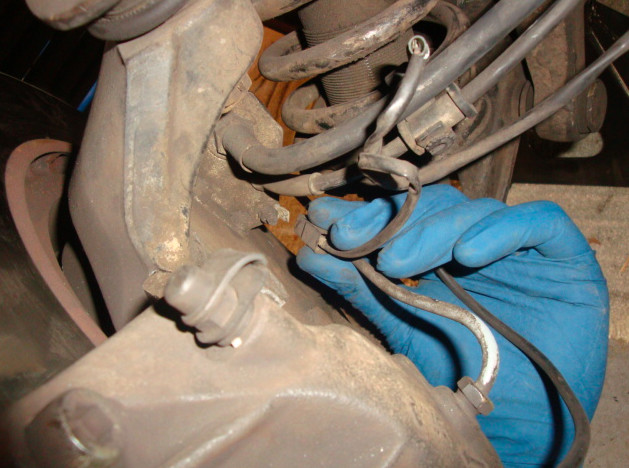 We now need to remove the brake caliper.

You can tell if your can has the early bearing or the later bearing by counting the bolts. My car has 6 bolts holing it in place. The later cars only have 4 bolts.

I loosened all the bearing retaining bolts (6) located on the back of the hub. Then I removed the bolts (2) holding the caliper in place. 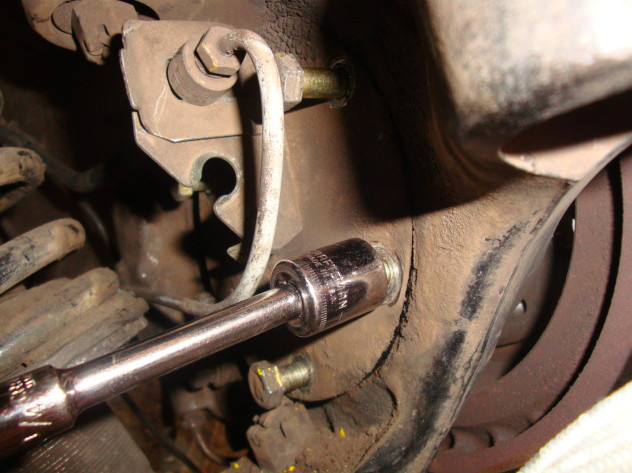 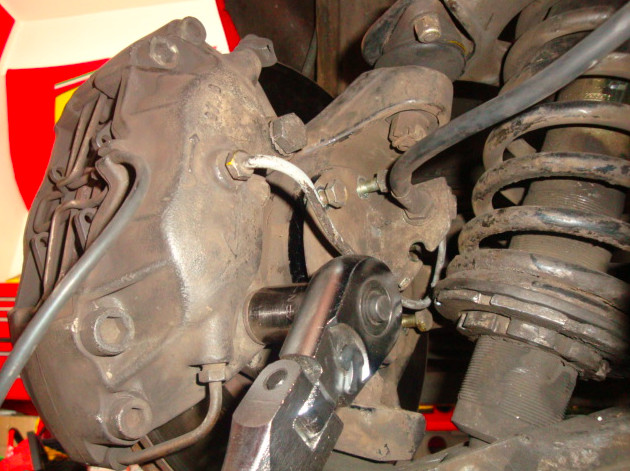 Now in order to get the caliper off you will need to remove the 6 bearing bolts on the back. But, one of them, then on that is closest to the curve on the hard brake line won't come out because the line is in the way. For now leave the bolts in holding the caliper in place. Now turn the wheel to the right, and remove all the bolts you can from the bearing. Then turn it to the left and remove the rest of the bolts. Next you will bend the brake line back just enough for the bolt to come out. Now you can side the caliper back and off of the brake disc.

Here is the caliper and dust shield, with the brake line still attached and out of the way. Sorry I don't have detailed pics of this step. I was too busy getting it off. 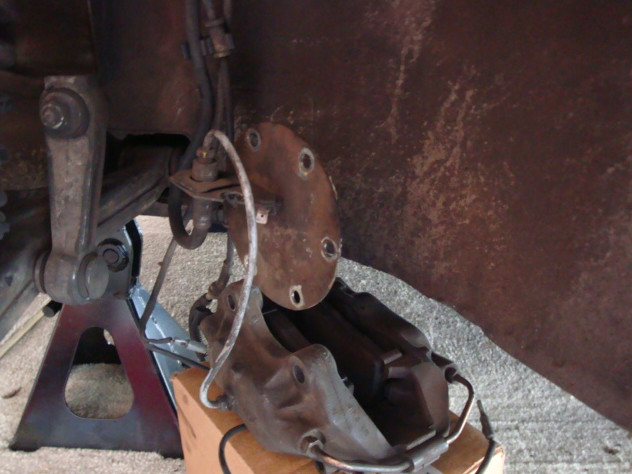 Since there is nothing holing the front bearing in place you can just remove it from the hub. 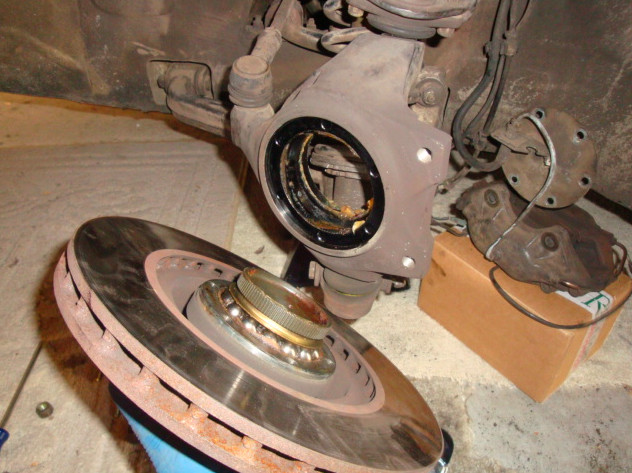 Now that the bearing and brake disc are out you can remove the 2 little bolts holding the disc to the axle flange. 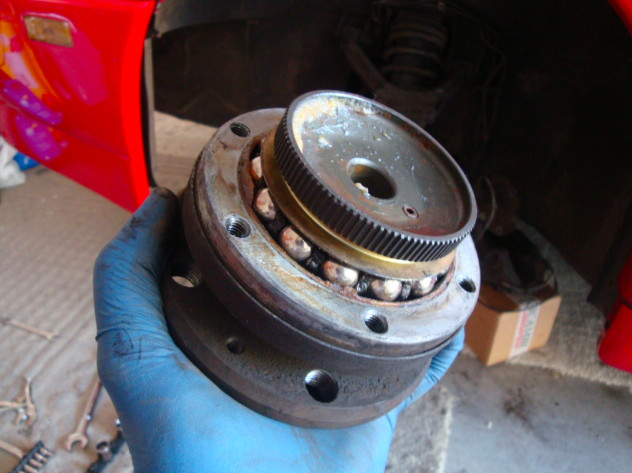 Next you will be unpeening the 30mm ring nut and then removing it with an impact wrench/gun. 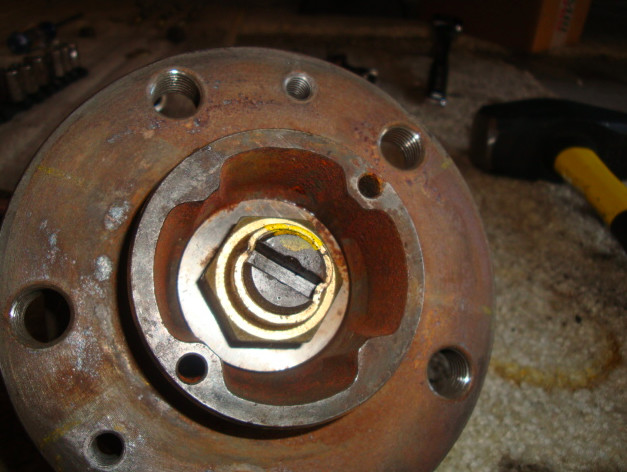 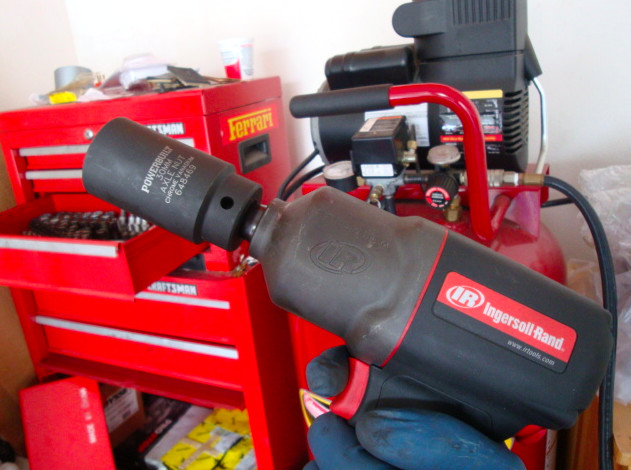 After you have the nut removed you will need to remove the bearing from the flange.

Sorry boys but this step I have absolutely zero pictures of.

The easiest thing to do is press out the bearing, but seeing as I didn't have a press I Stooged it. What I did was place a large socket inside the inner bearing race. Then I turn the bearing and race upside down with the socket on the bottom now. Then holding the outer bearing race I began to bang the race down against the socket. Little by little the race slide off the shaft on the flange due to the small impacts of the socket hitting the ground. Yes I know the was waaaaaaaay caveman, but it worked.

Okay I ran out to the garage and mocked up what I was just describing.

A 36mm socket fits inside perfect.

Then turn that sucker upside down and smack it out 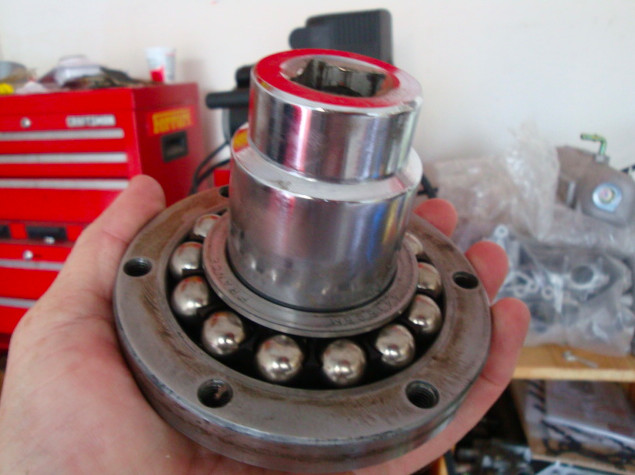 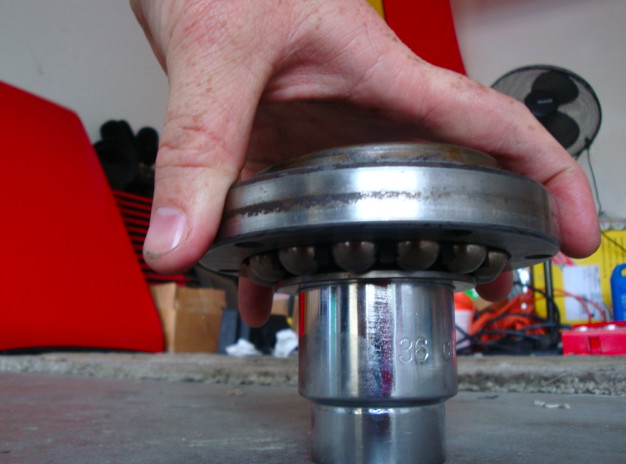 Hear is what the bearing looks like all torn apart. 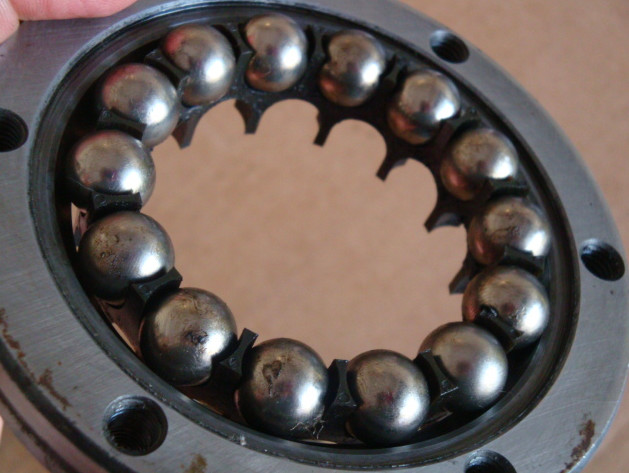 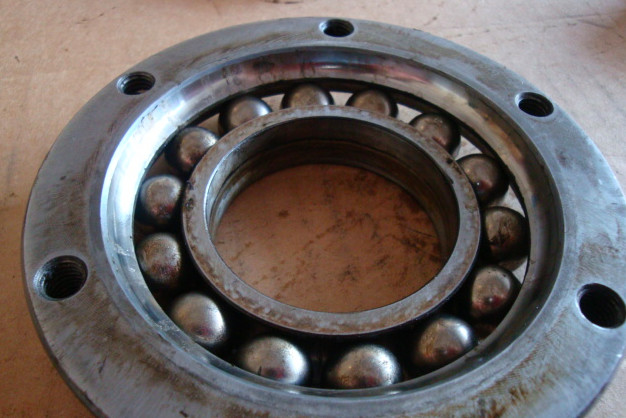 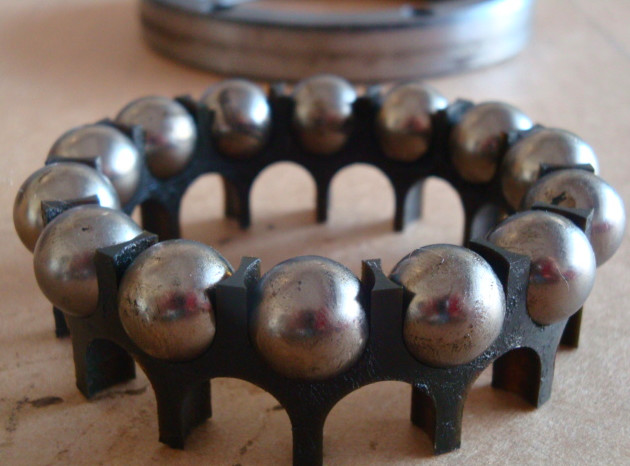 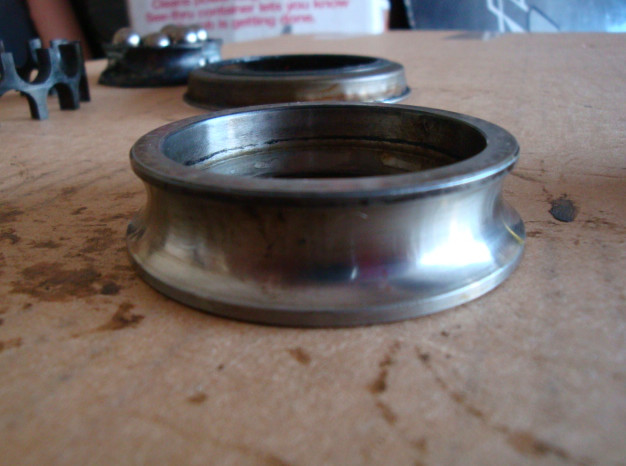 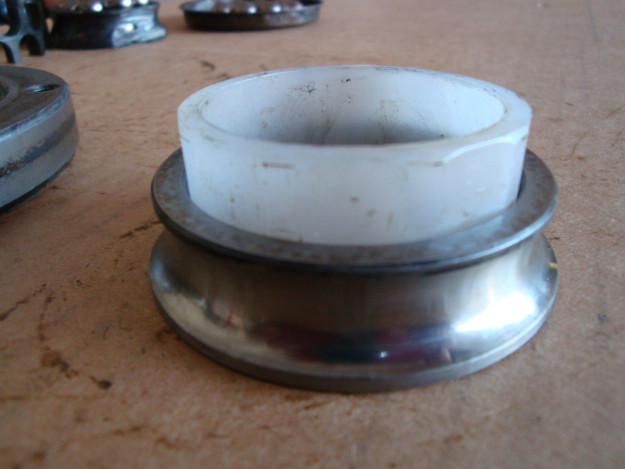 See the problem is that since the race is tapered you cannot grab it with a puller. There isn't a sharp edge for the puller to get a sold hold off, and thus just slips off. You also can't get behind it because it is pressed flush on the back of the flange. 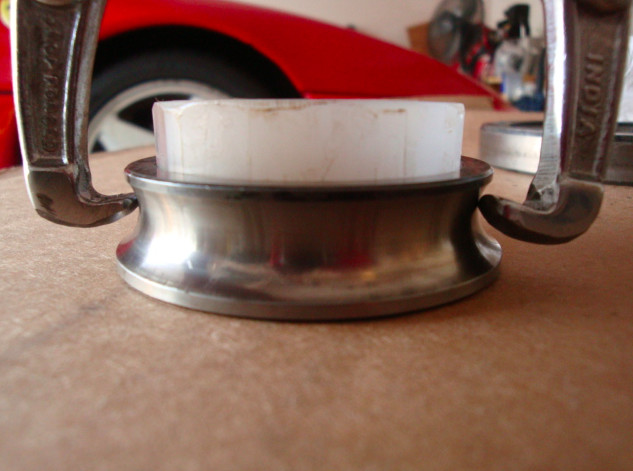 So what do you do know?

Well what I figured out was that the outer race and first inner race came off because the bearings where still inside.

See, the bearings were sitting inside putting pressure on the inner race forcing it off. So what we do is put the bearings back on, but BACKWARDS! 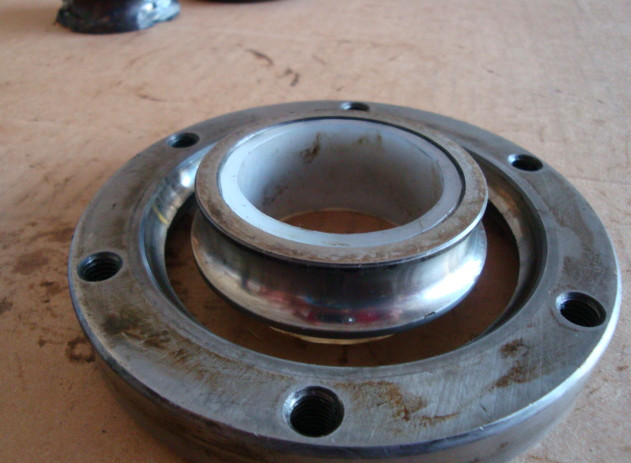 Now you will put the balls bearing back in between the 2 races, then fit the bearing cage back on to hold the balls in place, and have them separated evenly. 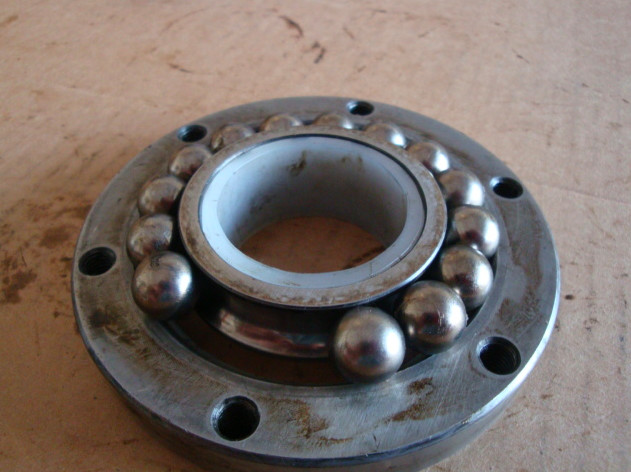 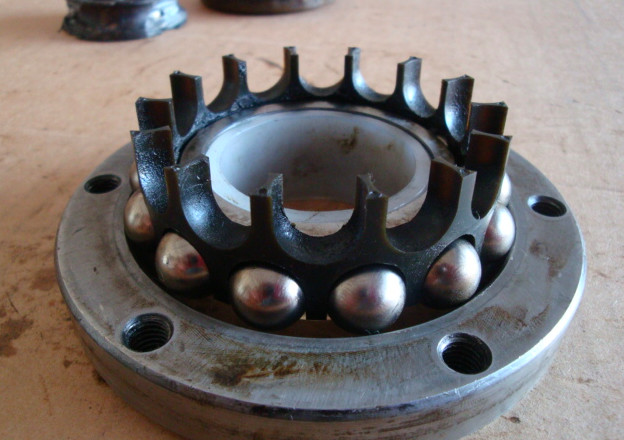 The ball bearings are being held to the inner race from the back via the pressure place on them from the outer race. Now the race can get pressed off of the flange shaft. 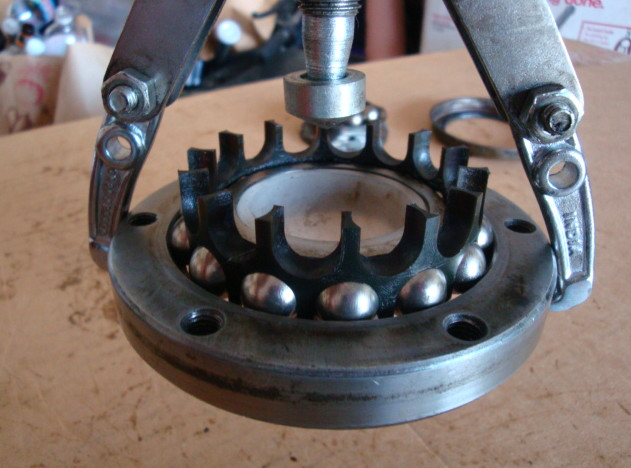 Well not in my case.

Why? Because Ernie does not own a press. Nor did I had a bearing separator. See you need to have even pressure all around the outer race to get the inner race to press out. A bearing separator looks like two half moons that slide under the baring and then get bolted together to hold them in place. Well I went out to buy one but the "large" separator they had wasn't wide enough for the bolts to slide past the outer race. So I couldn't bolt it together. I found a REALLY big bearing separator but fooking-a they wanted $140 for the thing. Sorry but, "homie don't pay dat".

I went to by buddies dad's shop and he took it off with the HOT wrench.

Ask how much I owned him, and he said "Just bring me a 6-pack of Bud Light". That's my kind of price! It's good to have friends. 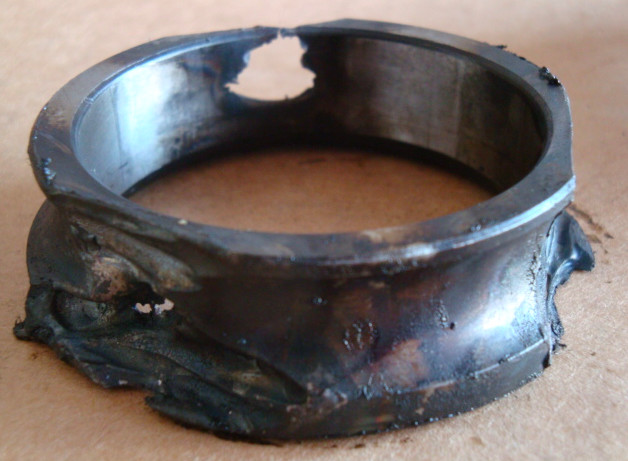 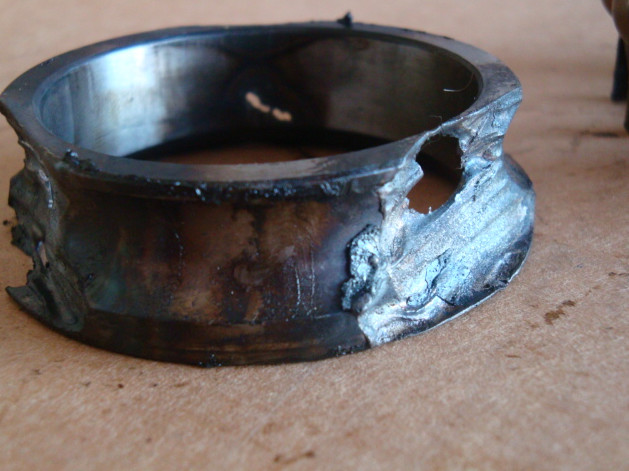 Well boys, that's pretty much it.

That is how you remove the front wheel bearing on an early model 348, Stooge Style!!!

Remember when I was telling you guys how I know what cheap bastards Ferrari are?

Well I did some homework and found out what other car our bearings come off of.

The guys I already told shhhhhhhhh!!!!

Let's see who can guess?

I went back a re-read some of what I typed. Man that spelling was horrible. Sorry guys. I was just trying to hurry and type as fast as I could, and post the pics up.

So no takers on guessing what car they come off of huh?

Ferrari, being the over charging cheap bastards that they are, took a wheel bearing off of a 1985-1991 Citroen CX. 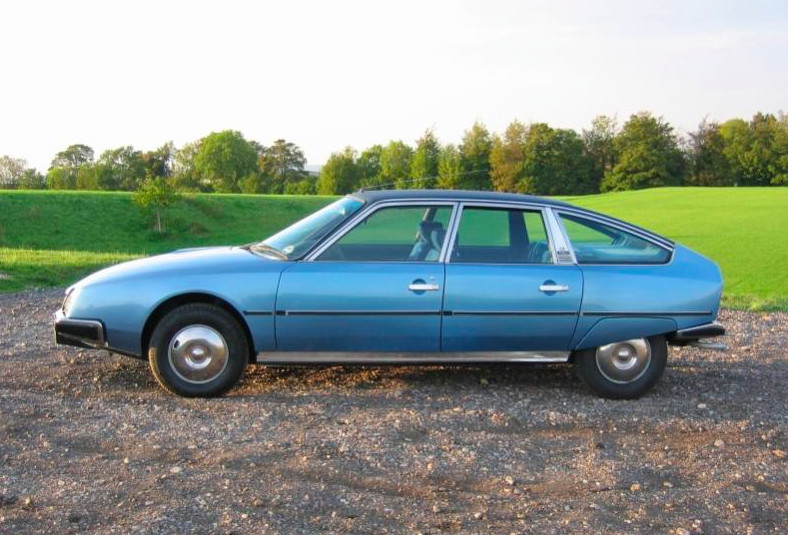 The wheel bearing that came off of my car was an SKF bearing. 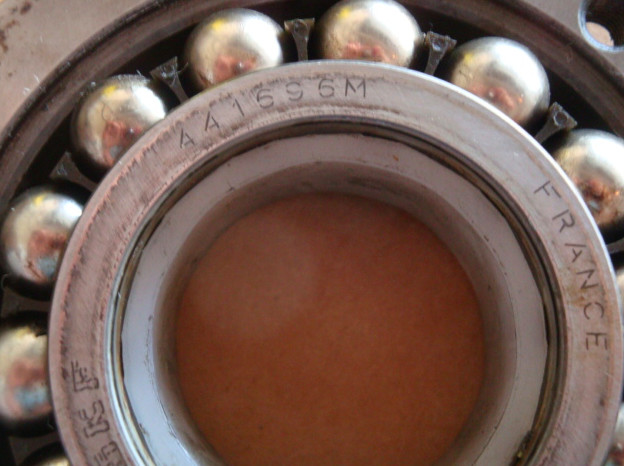 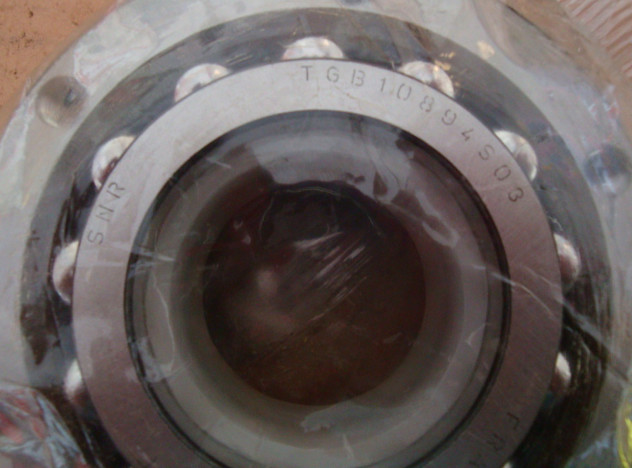 With all the charges I had to pay each bearing ended up costing me about $400.

So for $300 less than what FNA wants to charge I was able to buy TWO bearings. Keep in mind that was paying the exchange rate, bank charges, shipping, and dealing with fricken customs, and I still saved money on 2 bearings. Heck if you total up the savings if had of bought 2 at the US dealer price I saved $1,400!!

But wait it gets better.

I had a look at what the bearings would have cost me getting them from a bearing supply shop and the cheapest price I found was $246.

So Ferrari takes a bearing off of an uglyass Citroen, though it is a brilliantly engineered car, puts it in a yellow box with little horses on it, and then marks up the price 350%, for something that they do not make. Like I said "homie don't play dat"

This style bearing is used on the following Ferrari models: