What is it this time you ask?

Why my fuel tank, which is just finished FIXING a few months ago, has decided to start imploding and crushing itself like a beer can. 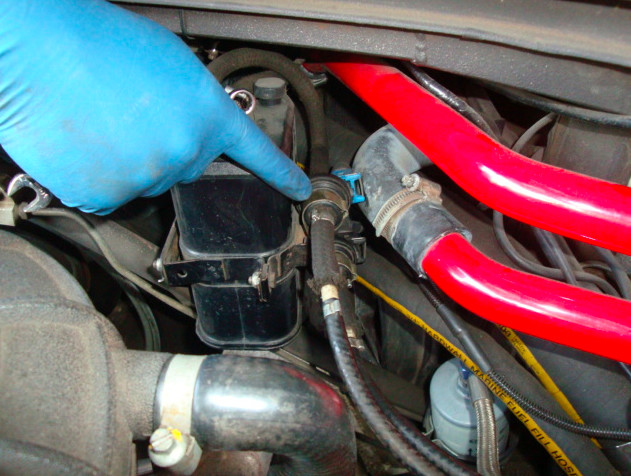 So here is how I removed it.

First remove the 10mm for the retaining clips holding the purge valves to the side of the charcoal canister bracket. 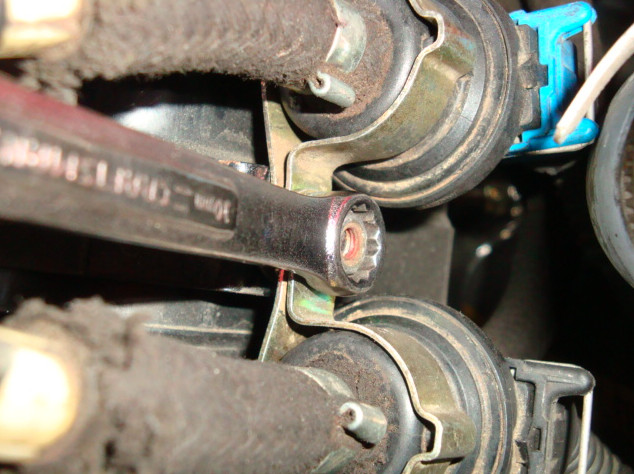 Disconnect the vapor line going from the top nipple on the charcoal canister to the purge valves, and remove the valves. 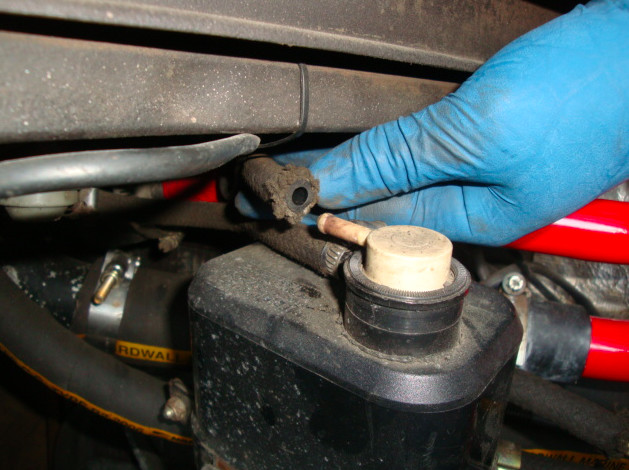 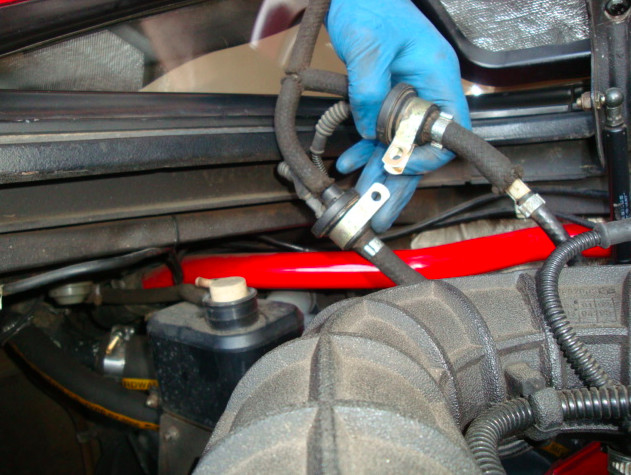 Now we need to disconnect the vapor lines from the valves. 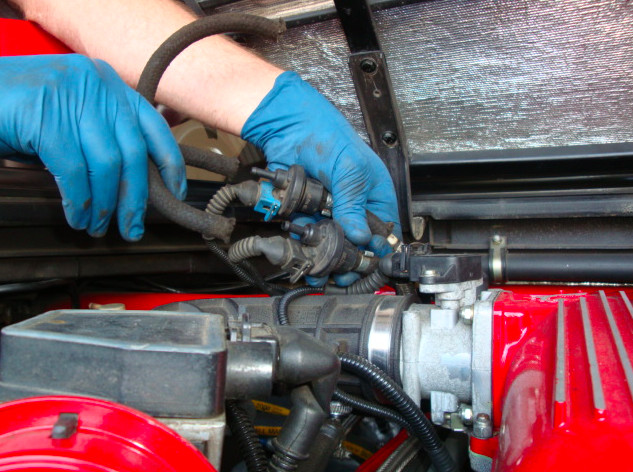 Before we replace the valve we need to find out which purge valve/s is faulty. What I did was to leave the plugs still attached to the valves. Then I started the car and let it idle. Placing my thumbs over the openings I could feel what valve had vacuum and what valve did not. Once I found the valve that had the vacuum I disconnected the plug and swapped it with the one that was not drawing vacuum to make sure the connectors weren't bad. When the connector plug is attached to the purge valve while the car was idling the valve that was good did not draw a vacuum. When I disconnected the plug from the valve that wasn't drawing a vacuum it then began to suck in air as soon as the plug was disconnected, and then stopped sucking air as soon as it was reconnected. The bad valve was sucking no matter if the plug was connected or disconnected. 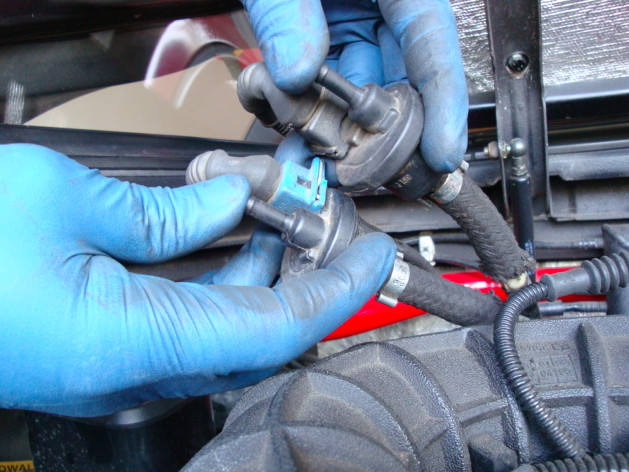 Once I found the offending valve I disconnected the plug by pressing and hold down the clip, and then removing it. 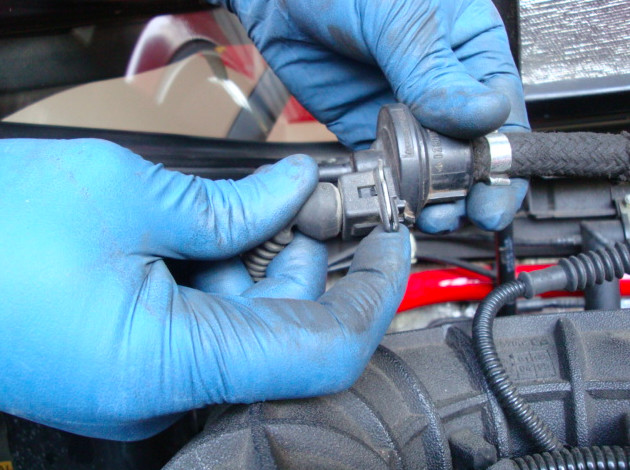 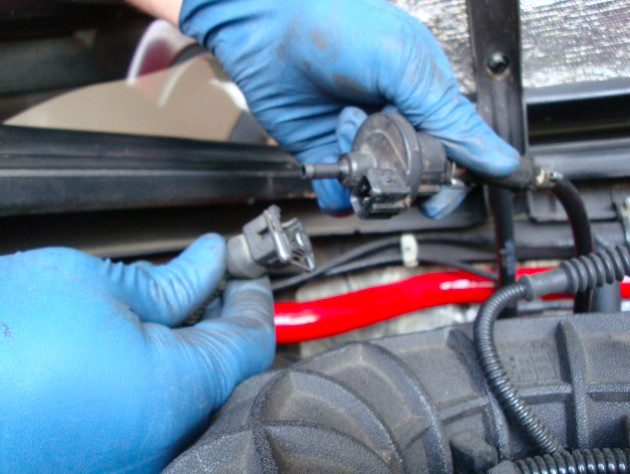 Next unscrew the clamp the on the vacuum line, and then disconnect it from the nipple on the front of the plenum 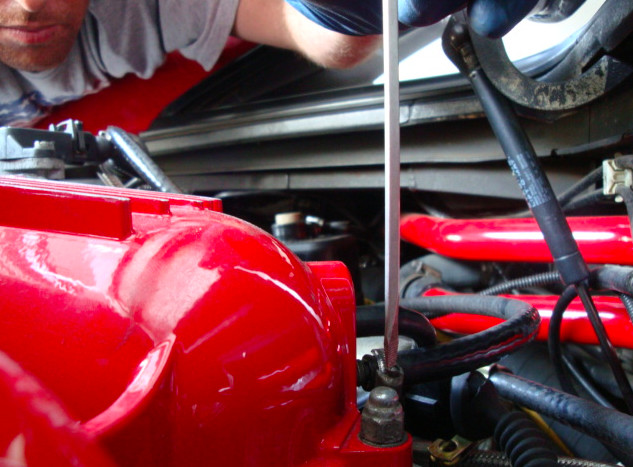 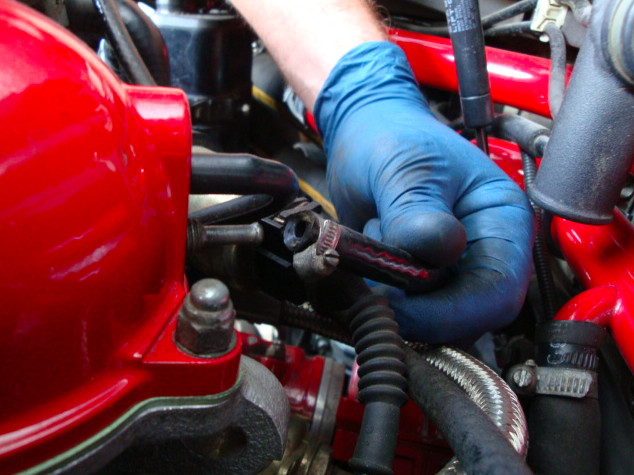 Now that you have the purge valve out it needs to be removed from the vacuum line. To do this you must cut the clamp off holding the line to the valve. I used a pair of wire cutters and squeezed the crap out of them. It took a good bit of force to cut the clamp, but it did come off. 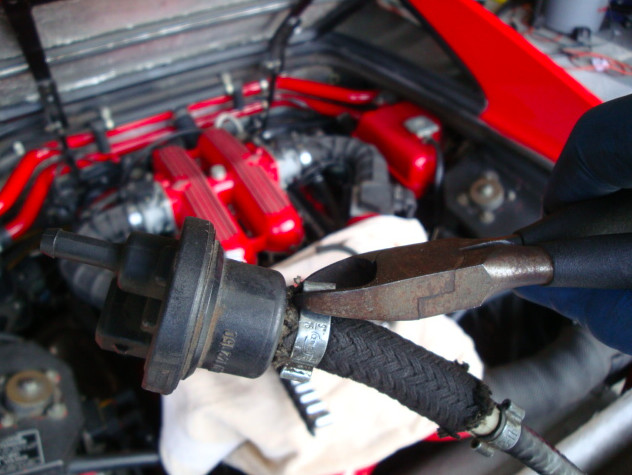 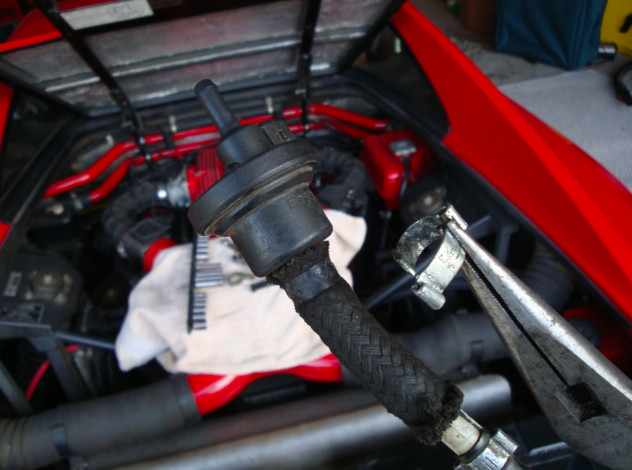 Now remove the line from the valve, and it's off to be replaced. 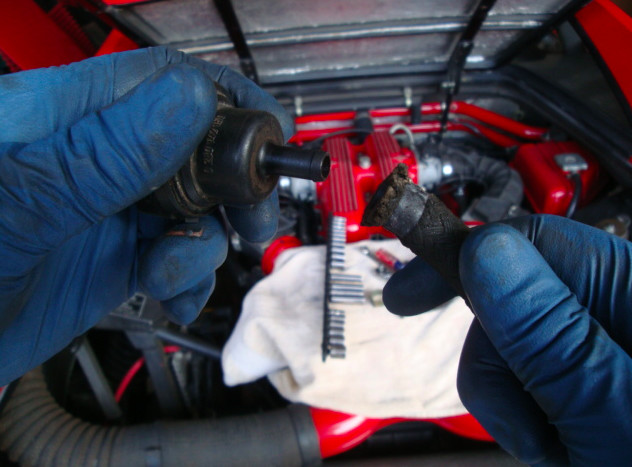 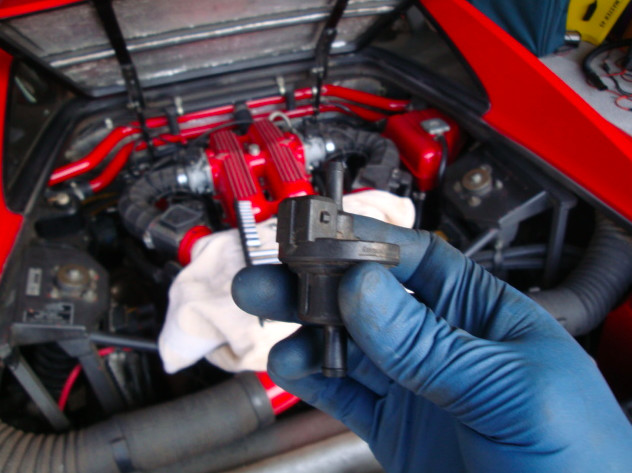 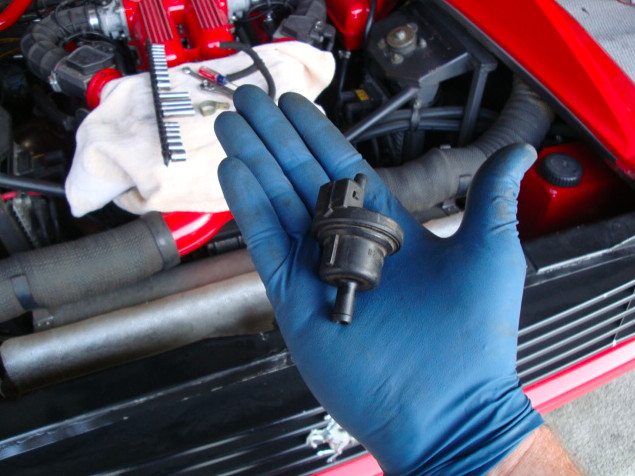 Now for some comedy.

What do we know about Ferrari kids? They are over charging cheap bastards.

Is Ernie going to pay retarded (oooooooo I said retarded

) prices for a valve that they DO NOT Make? Nope!

The purge valve is made by Bosch, as is pretty much everything else electrical related on these cars. 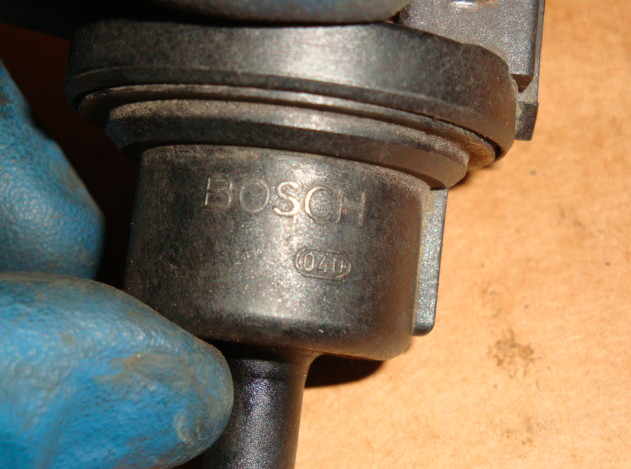 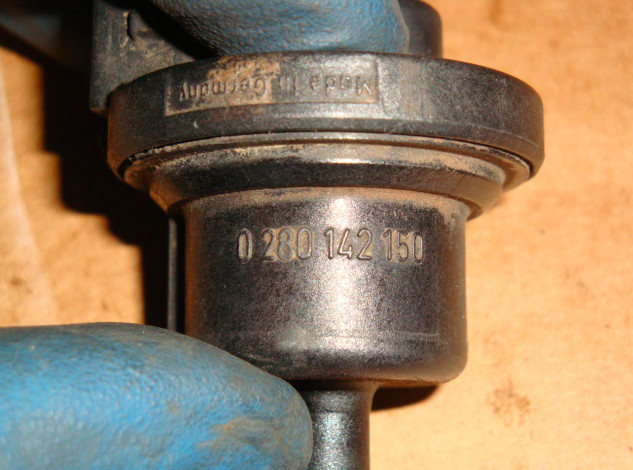 After doing some homework, you just gotta love the internet, I found out that the purge valve was used on a whole lot of different cars. I'll just stick to the ones that where least least expensive.

Here are the cars it is found on:


So Ferrari's mark up on this little part they do not make is in the 600%+ range. Sorry but "homie don't play da".

Well boys that's how you remove the vapor canister purge valve on a 348, Stooge Style!!!!

Now GO CHECK YOUR PURGE VALVES before they start crushing your gas tank like mine.

When I tried to remove the gas cap it was sucked shut on the filler neck. I had to pop it off, and after I did I heard a "whooooosh" of air rushing IN the tank. So if you ever have that happen, check those valves immediately!

I'm still pissed that the check engine light never came one for these. And yes both of my c.e.l.'s light up.

Now I just have to figure out how I'm gonna get the tank to pop back out????

Thanks for the pat on the back Rick. If it is something that hasn't been posted before I really do my best to post it up for the rest of the gang, and I know this one hasn't been covered yet. Plus this part doesn't only come on the 348, it come on several other Ferrari's. Seriously though, GO CHECK YOUR PURGE VALVES!!! You really don't want this to happen to your tank.

I also have an update.

Called another Hyundai dealer and they have the part for $86.96. Yeah BABY, that's what I'm talking about!

Fricken Ferrari, charging $745 for an $87 dollar part. There is nothing wrong with making a profit, but OVER charging $658 for a part is a pure rip off. That is an insane markup of over 750%. I just cannot imagine having to pay $150 hour labor + $745 for the part, and you know they would have made you buy two. So that bill "could" have looked like $1640, when in reality it only costs $174 doing it yourself to replace BOTH valves = a HUGE savings of $1466 eeeeeeeasy. Honestly, if it wasn't for me being able to do my own work I do think I would ever own a Ferrari.

Well I'm off to the dealer to put the order in, the Hyundai dealer that is. Hahahaha!!!