Previously I had an AEM intake installed on my 2002 SE and fabricated a heat shield for it:

However after learning more about the purpose of the air chamber on the on the stock crossover tube I decided to go back to stock. Then I saw a thread by spitefulcheerio that got me thinking about intakes again.

I decided to experiment with building an intake which incorporated the stock crossover tube with the air chamber. I found a crossover tube on eBay and bought it for $20. I wanted to be able to reverse anything I did, so I didn't want to trash the original crossover tube.

After some head scratching and a couple of false starts I fabricated this: 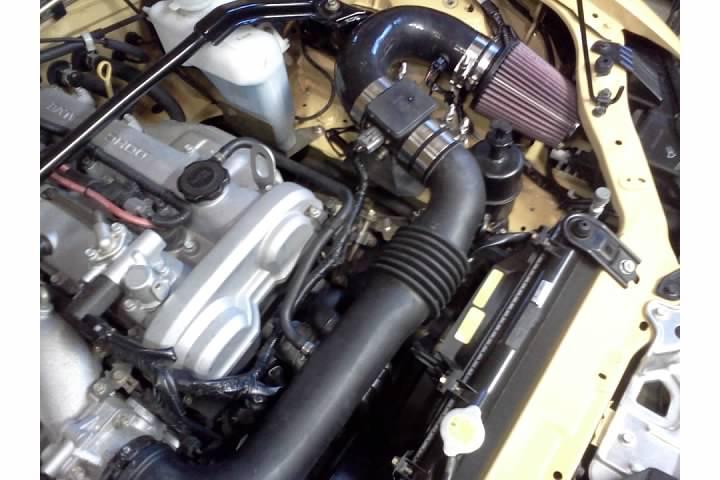 I used 180 degree silicone tube to locate the end of the intake tube near the air inlet hole below the driver side headlight. I used a smallish cone filter to fit in the small area right behind the headlight.

I relocated the relay switches and removed the mounting plate. It was necessary to shorten the crossover tube to get the 180 degree elbow to clear my stock shock tower brace.

I cut a hole in the 180 elbow for the intake air temperature sensor and reused the stock grommet in hole. A couple of couplers and clamps hold it all together.

It all seems to work. No codes and the idle is unchanged. It is a bit louder than the stock intake but not as loud as the AEM. If it works out, perhaps I'll build a heat shield for this version.

Does anybody know if the airflow meter needs to be mounted level? In the current configuration it's sitting at about a 20 degree angle.

I still like the new intake so I built a sealed (well mostly sealed) heat shield for it. I think it turned out pretty well. I'll probably have to do some minor (hopefully) tweaking. 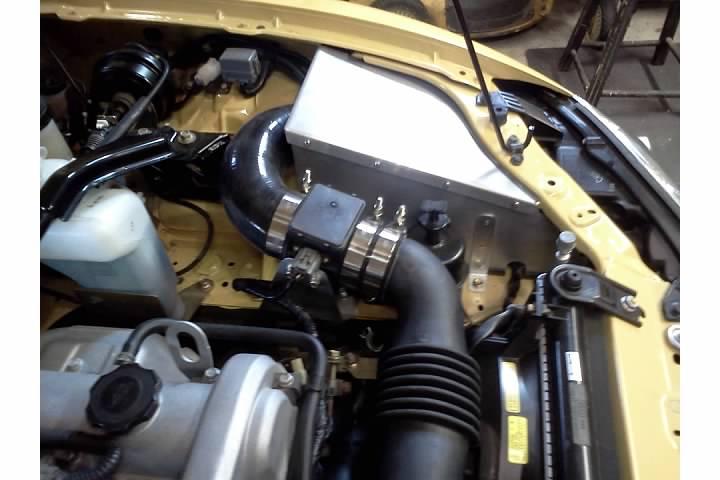 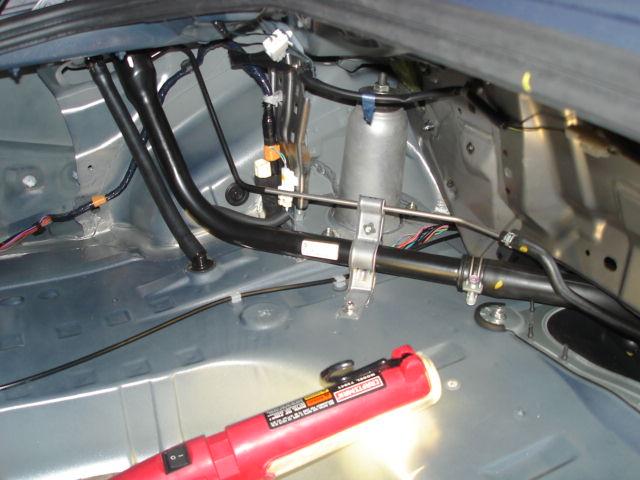 I bought an UltraGauge. It's actually a pretty cool little device for the money. It would be nice if the Miata provided the data for more gauges, but I'm really happy with it so far.

The answer to your question about the temperature is (as with many things), "it depends".

I have an auto-dimming mirror with a built in temperature gauge with the sensor mounted at the bottom of the front fascia on the driver side. It happens to be near the intake hole for an NB. This morning on the way to work the ambient temperature was 58 degrees. Coming home it was 82. All temperatures are in Fahrenheit.

As long as I keep moving at a reasonable speed, the intake temperature stays about the same as the ambient.

It heats up faster than it cools down, but it will cool down, but not all the way back to ambient. I suspect heat soak is the explanation. It might get back down to ambient eventually. I just haven't driven it at speed long enough yet to see it.

The worst case is re-starting the car after it's been at operating temperature for a while and before it has cooled down. As it sits, everything just soaks up the heat. Based on a very small sample the intake temperature seems to hit a plateau about 105. That may be a function of the ambient. I'm not sure.