The Good, The Bad, and The Ugly!

Yup this is a saga right straight out of the old West! The protagonists are the OEM muffler, the ugly, the RS Race muffler, the bad (like in bad ass), and the Greddy Ti-C, the good! Why the old West? Well they all came from that direction to beautiful Cincy, OH on the lovely banks of the Ohio river. Below are three pics. The first one is OEM, RS Race, and the Greddy. The 8.6 pound Race (with baffle) and the 11.2 pound Greddy (with baffle) both look diminutive next to the monstrous 26 pound OEM all sitting on the Greddy's box. The next is the Greddy on the '06 Sport, and the last is the Race on the Sport. So let's find out which one is gonna make my day?

I always enjoy testing out various product not only on the car but other stuff used around the house. Since these items are relatively cheap, I can buy them and spend some time with each to make a proper evaluation. With mufflers, this is a very subjective process and takes a good bit of time to do. Also, I like to do my testing using the scientific method. One can never evaluate the worth of anything with out installing, observing, getting feedback (sometimes from the neighbors), and doing all of this under varying situations. The installation is important to examine how well something fits. Observing is a check on your senses to make sure that the experience is pleasant. The feedback is perhaps the most important, and I suggest you rev it up around midnite in your neigborhood to gauge your neighbor's reaction! And finally, you'll want to listen to the sound top up, top down, different RPMS through the gears, and different speeds on a whole variety of road conditions. While on this subject, I noticed that many of you throw a whole bunch of stuff on your cars, and then try to come to a conclusion about some of the individual effects. My feeling is if you can't do the labor yourself, you shouldn't do mods on your cars. The reason is that each item should be evaluated individually and separately to measure its worth. The cost of labor would just be to high for most people to take this approach.

Regarding cost, the Ugly came with the car. The OEM is actually very pleasant to listen to. It has the sound of a well oiled sewing machine. Another virtue is it doesn't have any drone and sounds pretty much the same no matter what the speed or road surface is top up or down. My biggest problem with it is its appearance. I corrected some of it by getting a spray can of BBQ paint from Lowes for five bucks. Painting helped hide it to a great extent, but I hated the look of dual pipes sticking out of the cannister. Also the view from the rear pax side of the car was quite hideous. When I finally removed it, I felt like I had excised some huge cancerous growth!

I got a deal on an unused RS Race from a fellow in California. It was in perfect shape. I judged it to be made OK and the fit was alright. I liked the appearance of it on the car since it didn't draw any attention to itself. On a 4-cylinder car a single pipe sticking out the rear is just perfect. Dual pipes are just plain ostentatious and scream, "I wish I had bought a V8!" Another factor in its favor was weight of 8.6 pounds compared to the OEM's bloated 26! The guy in California got rid of it due to it being too loud, and it is especially when you stick your foot into it. Incidentally, I tested it with the baffle or insert in the tail pipe which is supposed to quiet it. However, most of the time cruising around it's kind of on the loud side, and at times, it had a lot of drone. Top up or down under varying road condtions it sounded pretty much the same. Accelerating through the gears was another matter. It had a very noisy harsh sound. I suppose some would say it had a lot of attitude.

At last we come to the Greddy which is the most interesting of them all. It came with a baffle like the RS, weighted in at 11.2 pounds, and was $356 total shipped from California. It was remarkably well made which has been my experience with JDM products. In fact, it was plain beautiful to look at. For me, beauty is just as important as performance! If I don't like it on the car, I'll put it over the mantle in the library. Now many of you may object to its appearance, since it has the fart can look with the big diameter tip that teenage devotees of Hondas admire. I'll admit it is a little bit boy racer looking! However, I think it looks OK on the car, but you can judge that for yourself. With the baffle in, it's quiet with a deep rich mellow tone. Sticking my foot in it produced a little bit of not unpleasant attitude. Incidentally, Greddy claims less than 94 DB with the baffle removed. In short, it made a very pleasant purring sound driving around top up or down under a variety of condtions with absolutely no drone!.

So what are my conclusions? Well there's nothing wrong with the OEM. It's a pleasant quiet sounding muffler. A new RS Race with shipping is $296 while the Greddy is sixty bucks more. The Race is lighter, has a traditional appearance, but at times, its sound is just too raw, and often annoyingly loud with some drone. The Greddy is a stunning piece to look at with great workmanship, only a couple of pounds heavier, and sounds really great, but you may not like its look on your ride. I could tolerate the RS Race, and if I hadn't ordered the Greddy, the OEM wouldn't be going back on my ride. However, the Greddy is just a more sophisticated piece in every aspect of comparison, so, in the final analysis, I preferred the Greddy. It just had a sweeter sound!

So there you have it. I don't have any sound clips. I'd need a laptop, mike, a video camera, and I suppose some software to make them. Hardly worth the bother. An update on the Greddy! The sound of it keeps getting sweeter and sweeter. The Greddy really makes my day, so I'm going to sell the Race! 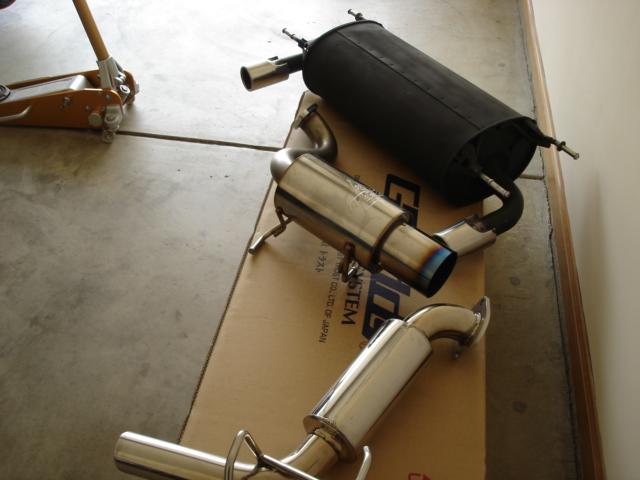 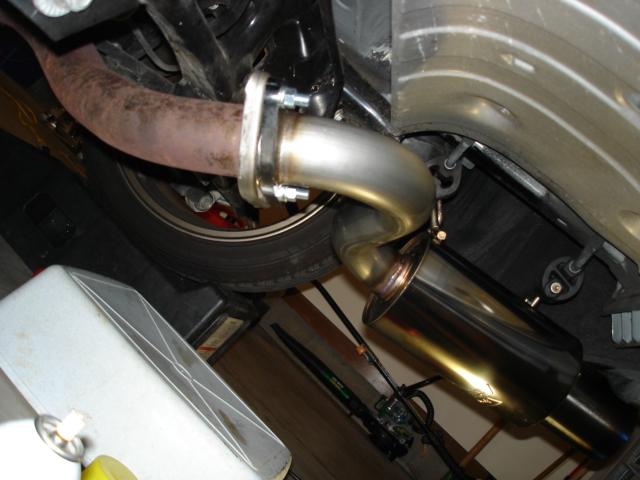 Your wish is my command! Also note the added accessory - the Trunk Cape! 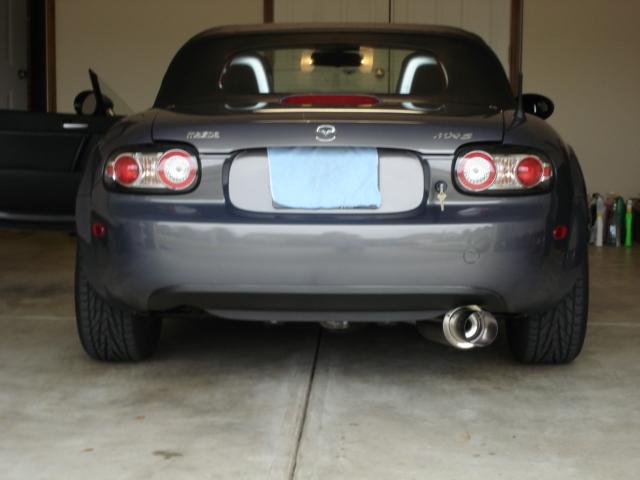