I sold my last fd in 2010 just a few months before my daughter was born. While I sold the car in 2010 I really lost interest in my fd in 2007. After five or six years of constantly tinkering with car, mods, paint, polishing, a single turbo conversion and tons of cash later I was not all that thrilled with the car in general. Really die to several reasons, mostly of my own doing such as removing A/C etc. I pretty well burnt myself out on RX7's.

Now Fast forward to two months ago. I'm working a claim in a small community in Arlington VA, Just of Glebe rd near Rt50 for those in the area. Low and behold I see a red fd that had been obviously parked for a long time and it had expired tags. I looked at the car out of habit but really didn't may to much attention to it. I ended up going back to the same community a week later but this time, I couldn't help but to leave a note testing the waters. I got an email from the owner the following day. He said that he was interested in selling the car and would like $5,000 for it! I asked a few questions and then agreed to meet. A few days later I met the guy who was a Surgeon in NOVA who was in his mid 60's. He told me the story of him buying the car in Fairfax in 1992 and wrote a check for the full amount the day he drove it home. So with the cool story also came some cool miles.

The car has 144,+++ miles on the odometer. I'm told the engine was replaced several months ago from a coolant seal failure. He also claimed to have had the radiator, AST, Hoses and even the turbos replaced. He then tells me that the car hadn't been started in months. We jump the battery which is dead and I turn the key, CHCHCHVRooommm.. She fires right up I went ahead and checked on the electronics, the wipers, lights etc and everything worked fine. The only obvious downside was the visible wear on the car. Some kids broken off both door mirrors, The drivers leather is worn through and there are some small dents on the rear fenders, faded crappy VR paint job etc...

So now knowing that I am dealing with the original owner , who has free & cleared owned the car since 1992. I'm thinking i have a major score on my hands. I counter offered him with $3000, We ended up at $3,500 for a totally stock, 1440 mile FD that I was going to drive home to Maryland. This deal is unheard of!

So here is the car the first day I saw it. 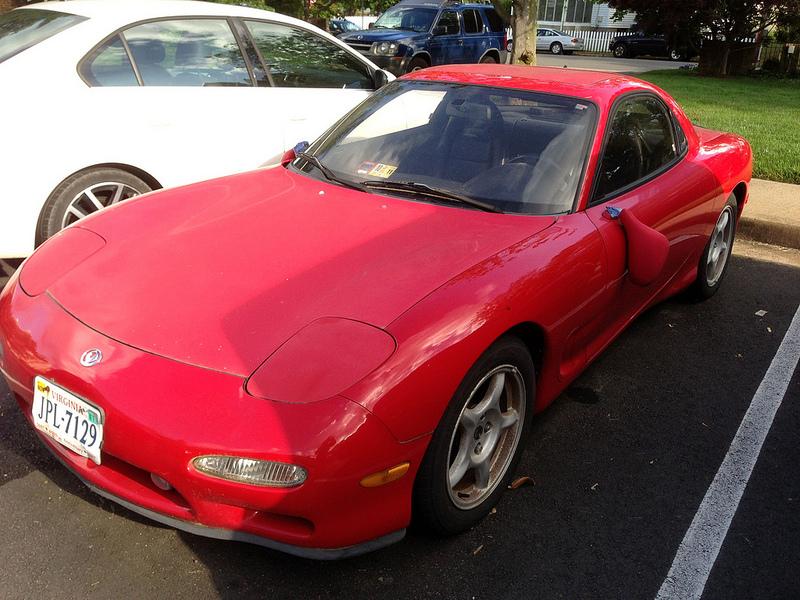 144K miles and still bone stock under the hood... 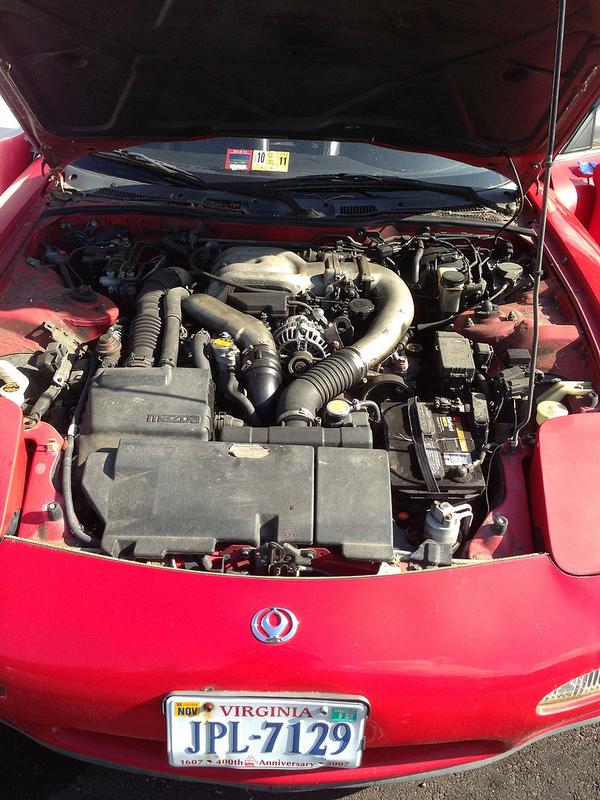 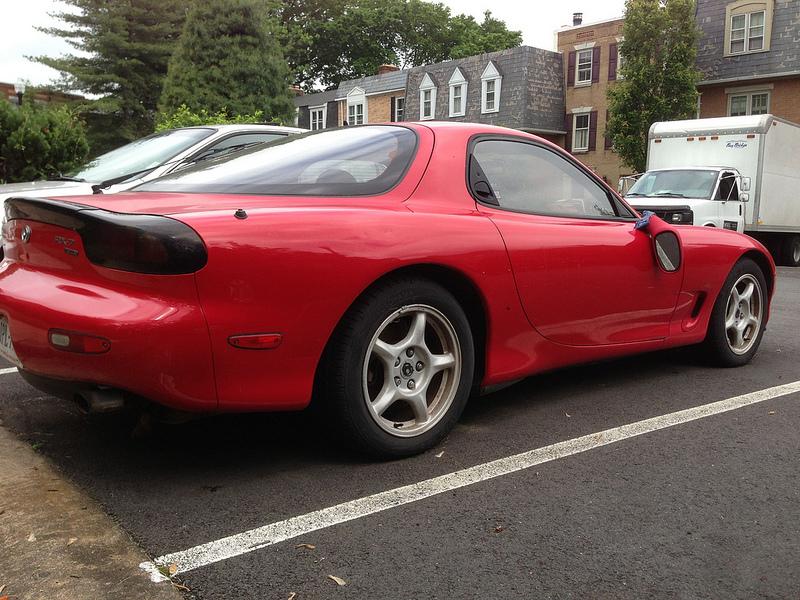 I was lucky, i already had a pair of VR replacement mirrors from a part out i did way back when. I bolted them onto the doors and headed home with my new fd. So right off the bat the pillow ***** were obviously shot. The rear end was beating itself to death on the ride home. Believe it or not the car didn't even have a boost gauge. Regardless the sequential twins seemed to be boosting pretty normal. I drove safe most of the way home but i started to light her up when I got home and i knew a tow bill wouldn't be to bad. Surprisingly the car drove fine aside from the bushings.

So first thing on the agenda was to just clean her up and see what it would look like after a few hours of love. The P.O. really kept the inside dirty, you can tell he was a Doctor who lived out of the car. He was also a smoker so the car need a good cleaning. 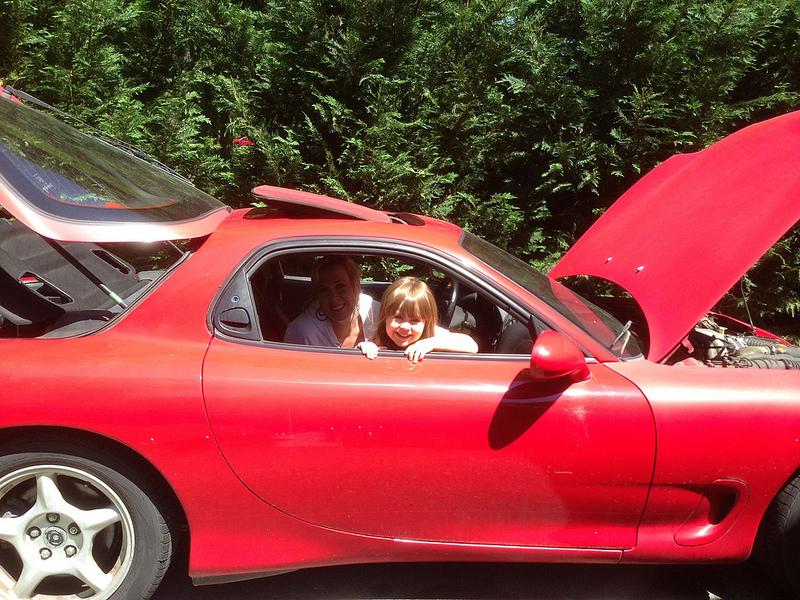 Pic of me and my daughter washing it. 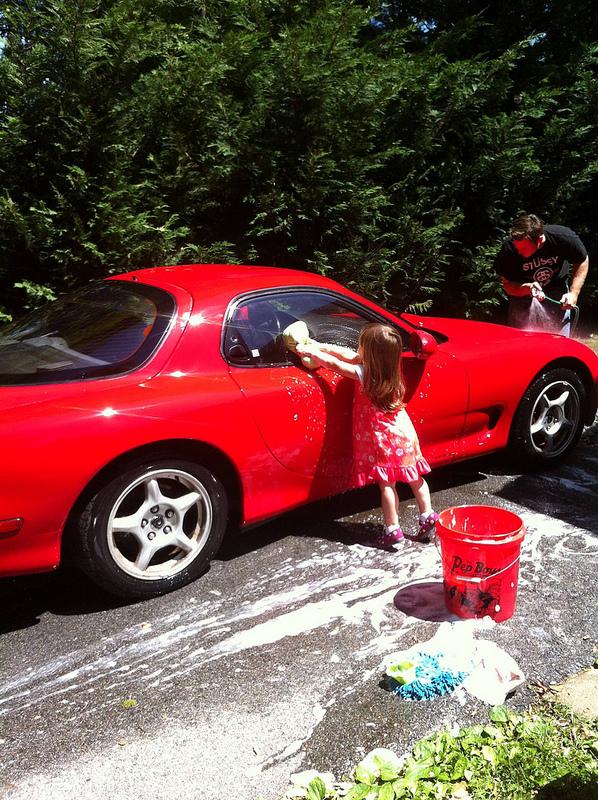 Getting to the inside, and stripping it out.

My son chilling in front yard. 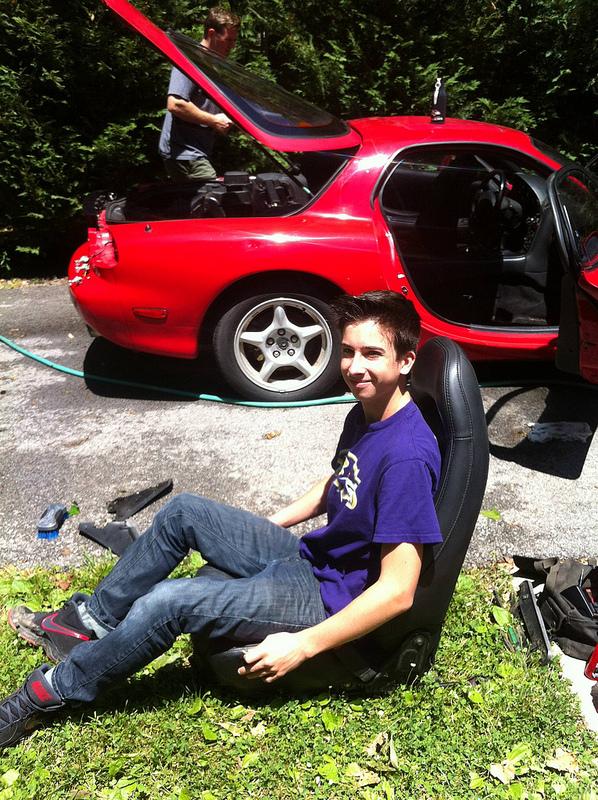 Starting to get to the meat of it. 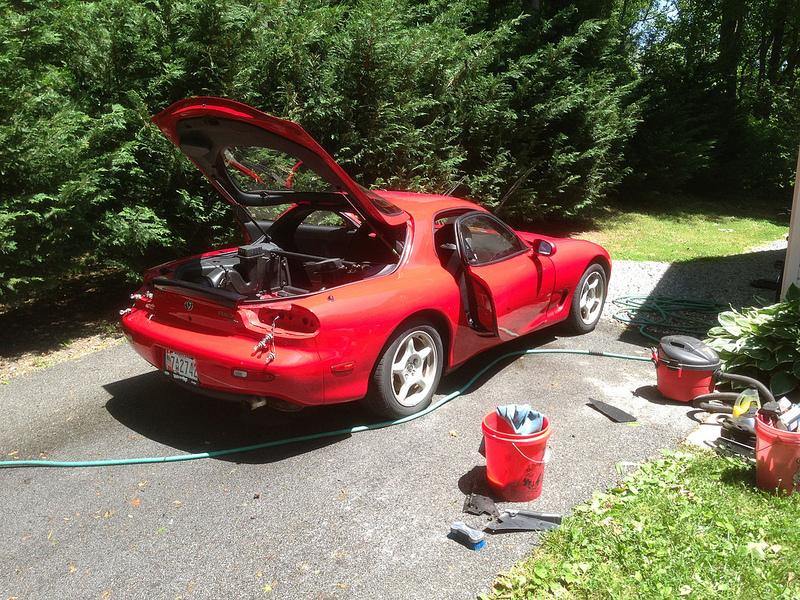 Okay so she cleaned up pretty good. 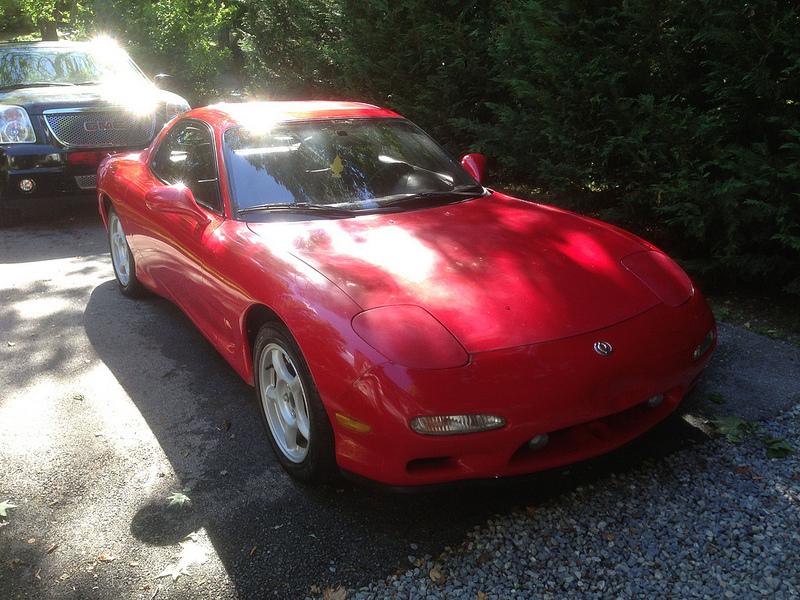 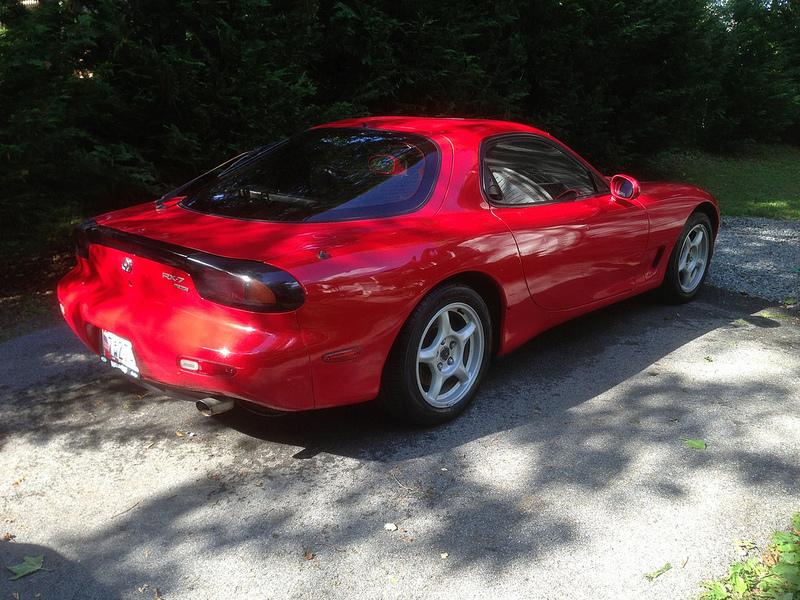 But I realized that the paint is only going to clean up so much. The hood at this point was pretty well faded and needed to be buffed. Luckily for me, i have a buffer.

So fast forward another two hours and I have buffed the car out as best I could. 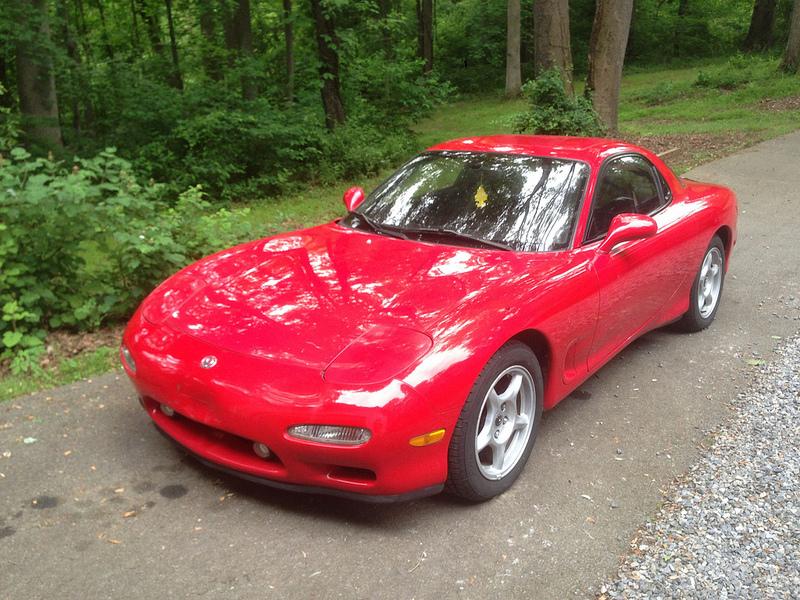 Now time to get her in the garage and get started.

So the goal for the car is pretty simple and straight forward. I plan to resurrect this car to a respectable street car. I will be doing all the reliability mods, a few power mods for twins, and improve the suspension/ bushings.

But I like to start with the basics for a nice car which is paint. So the car was put on jack stands and i started to tear it down. I started in the engine bay and worked my way around and under. I've ghot it just about stripped all the way down now. 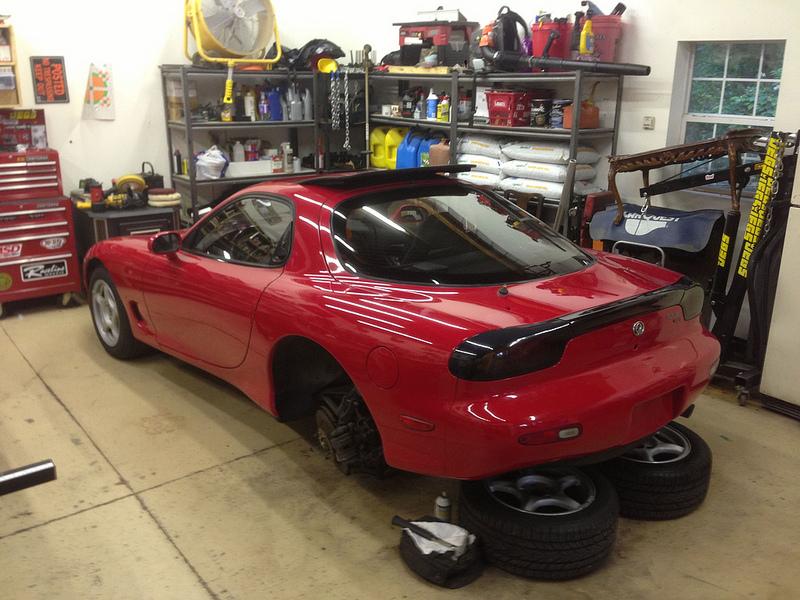 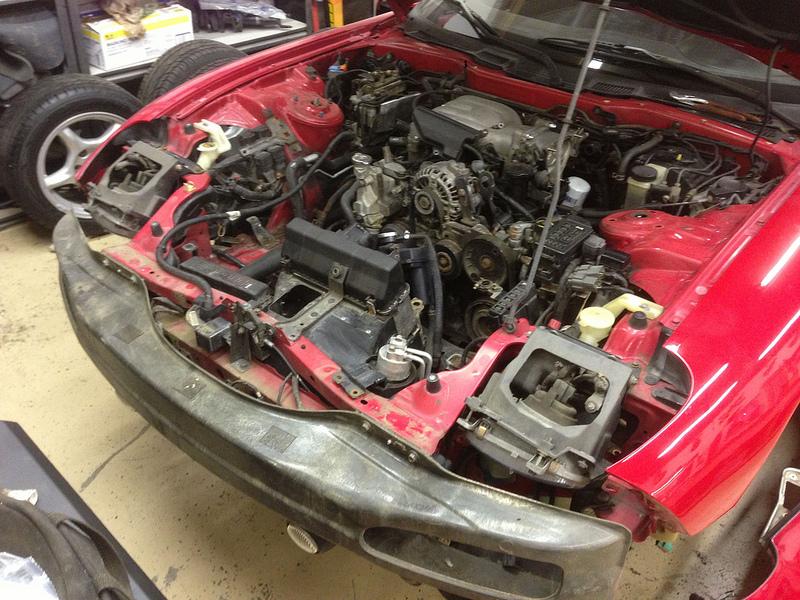 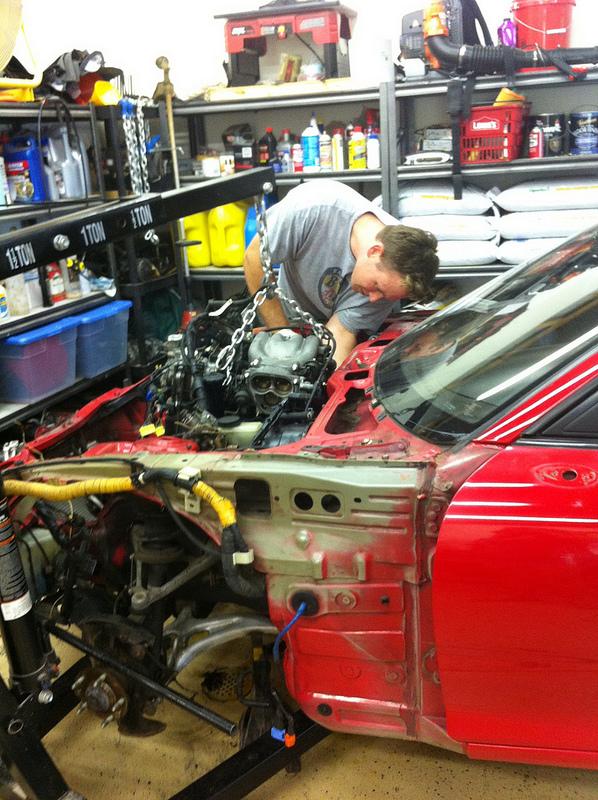 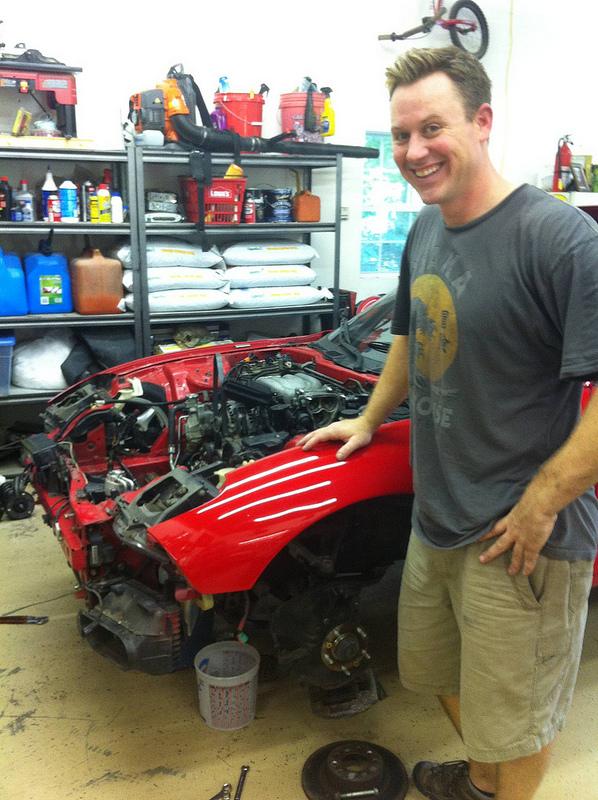 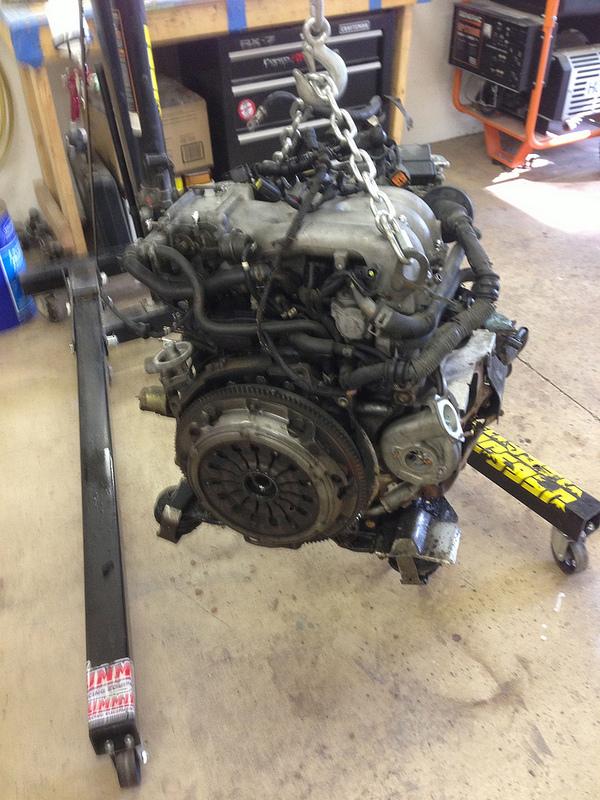 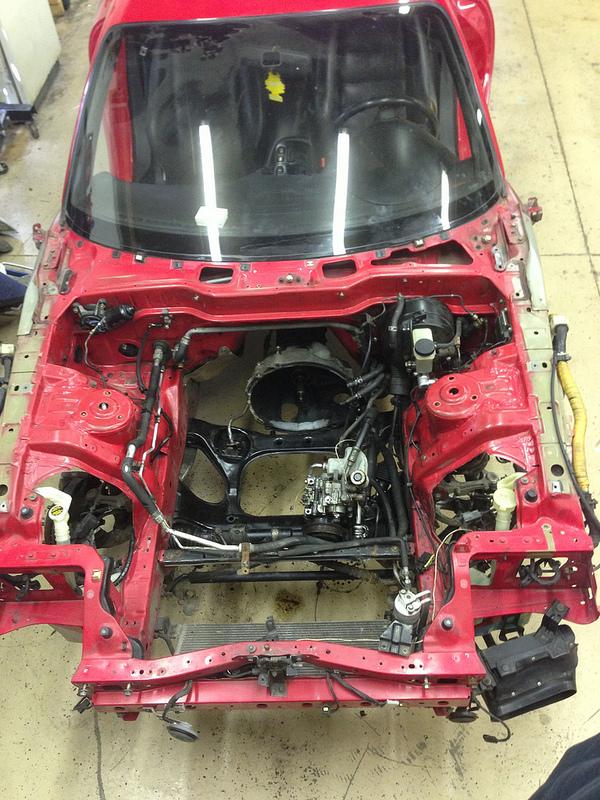 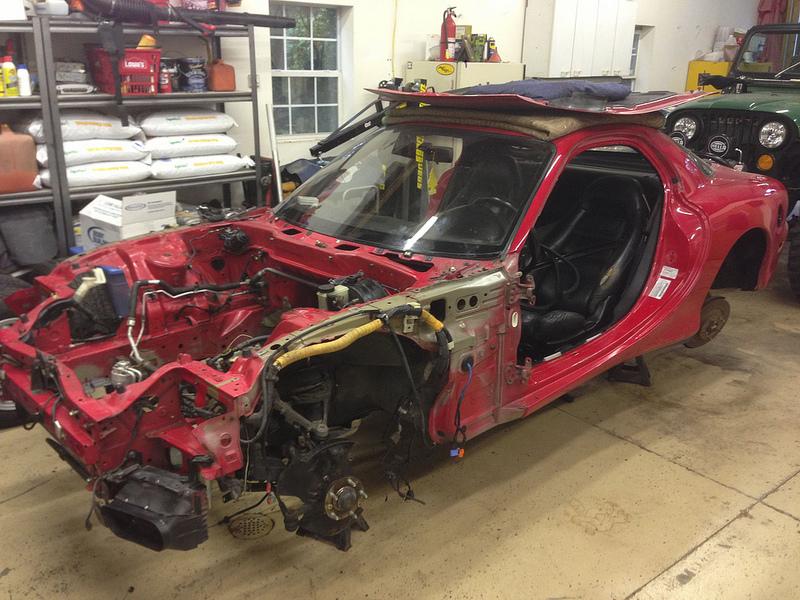 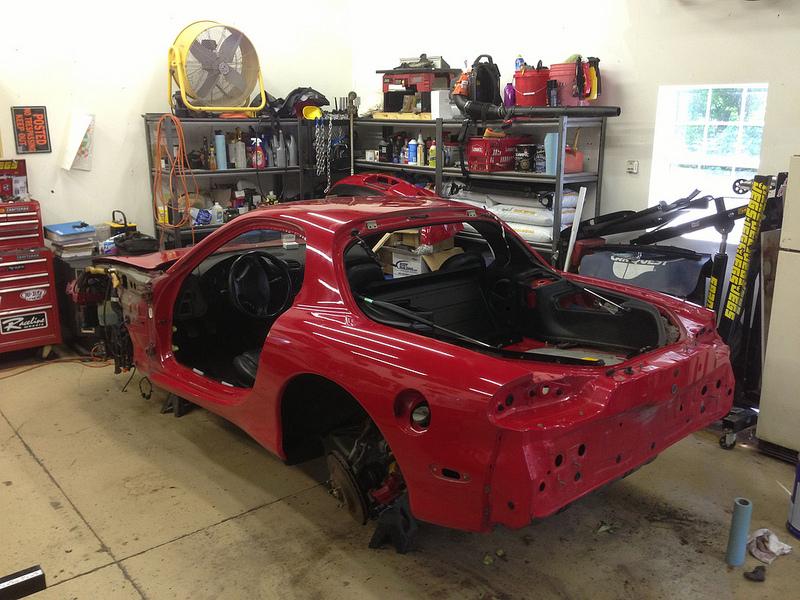 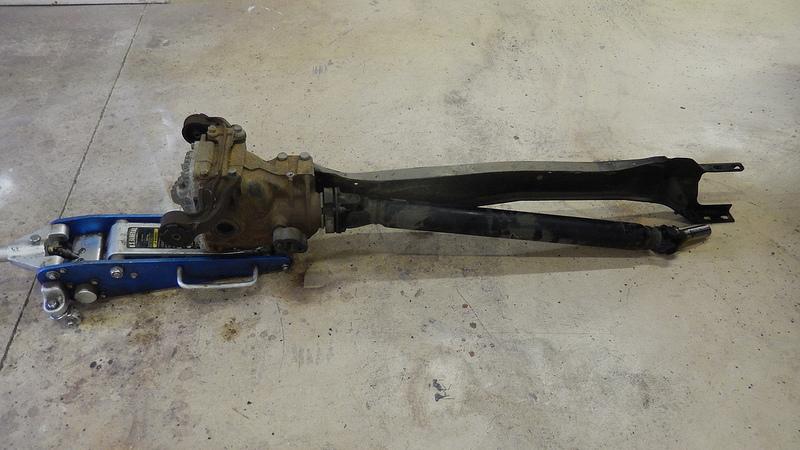 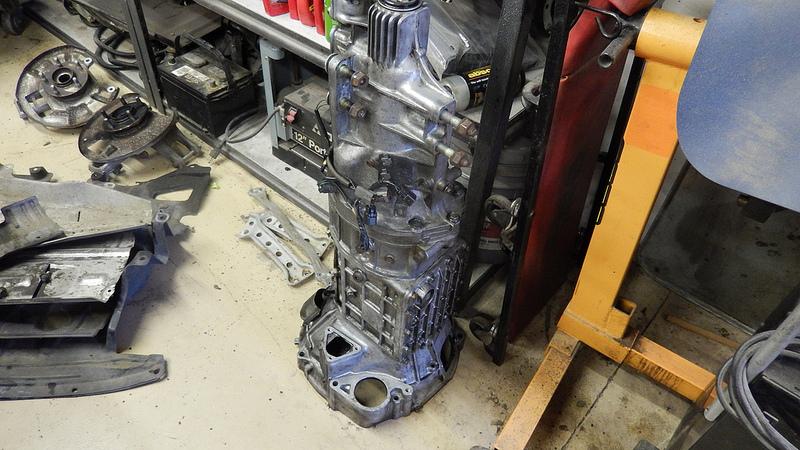 So now that I had the car stripped off it was time to start getting to the body work. 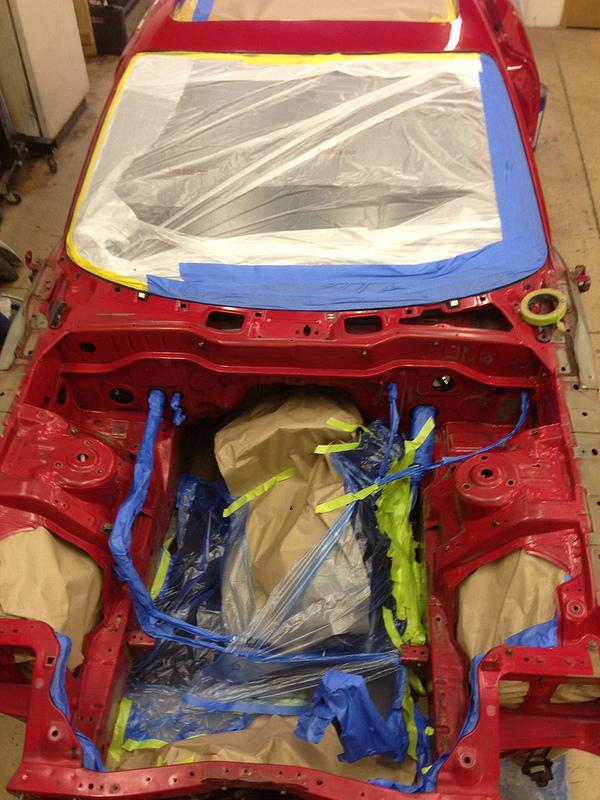 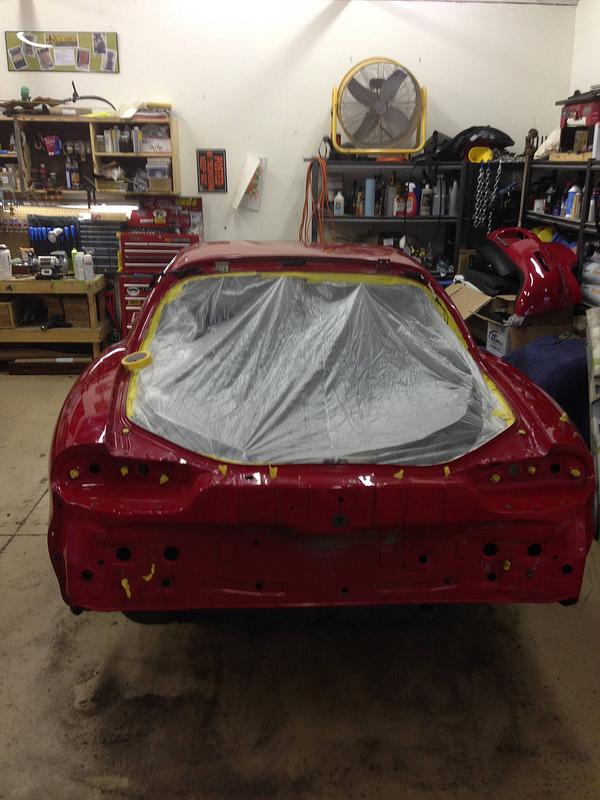 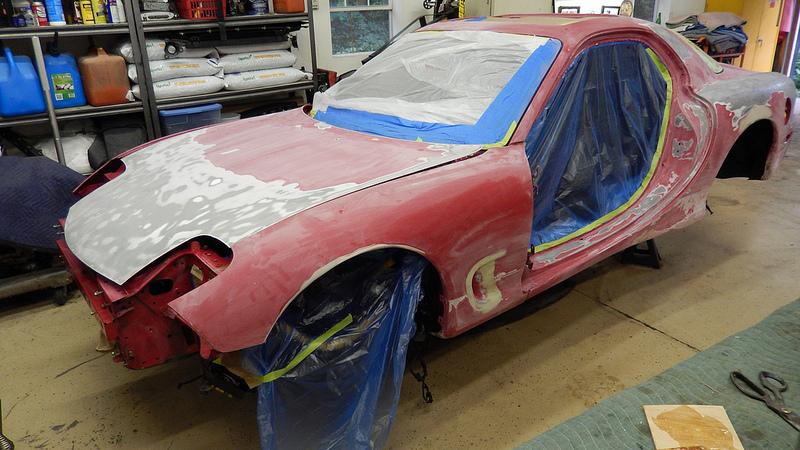 Molding the brake ducts into the fenders. 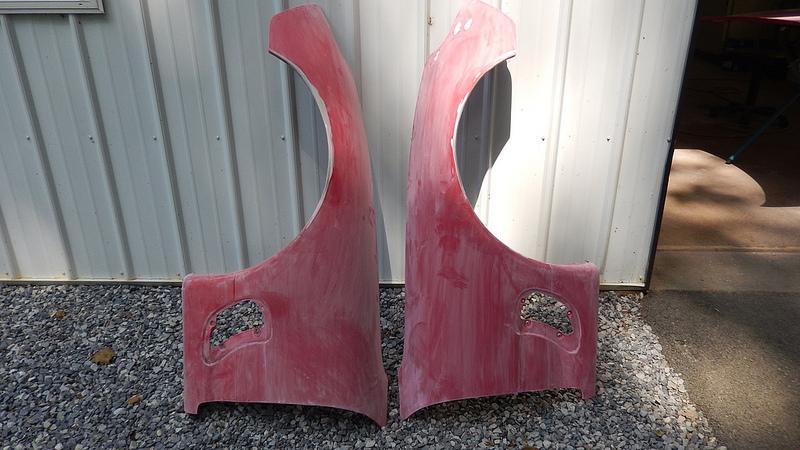 Glue these down with epoxy, 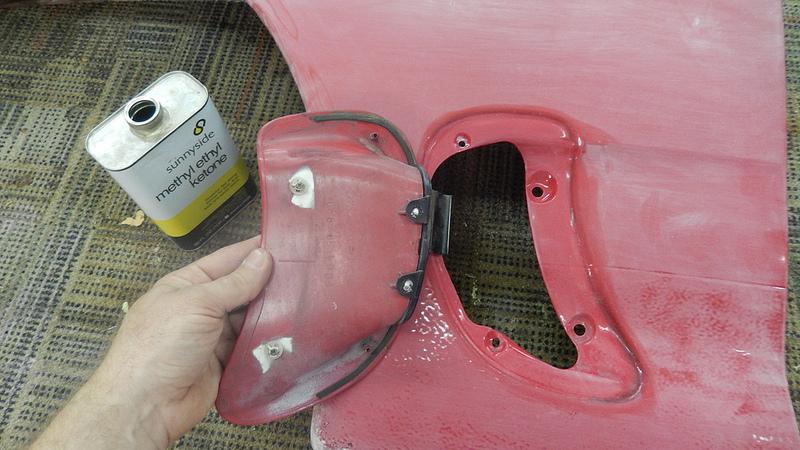 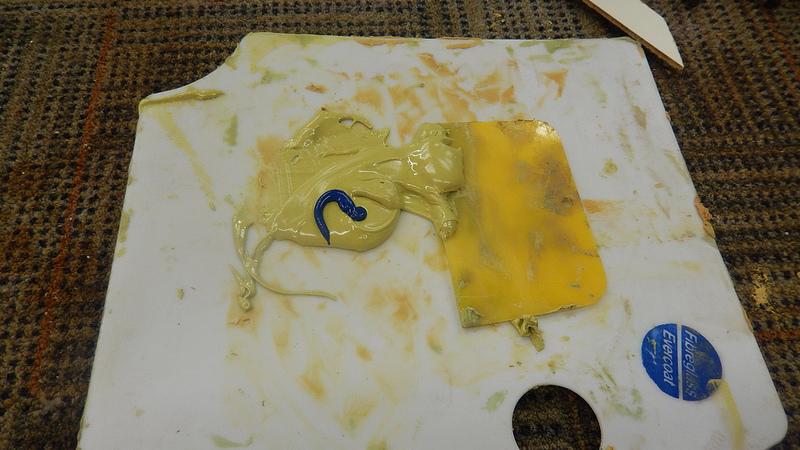 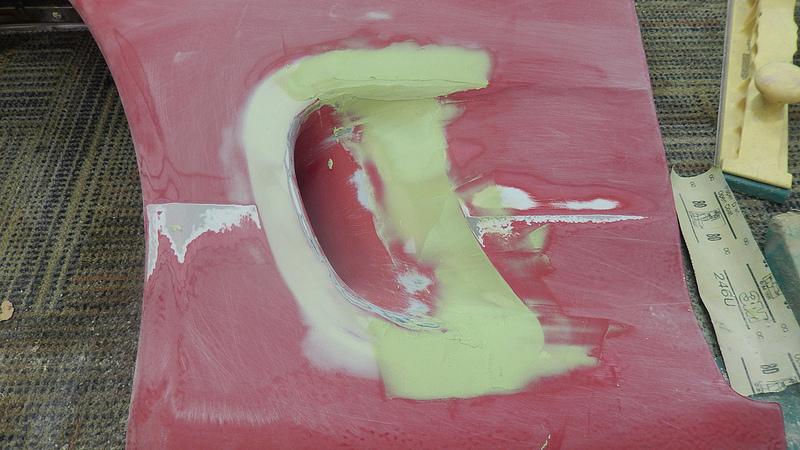 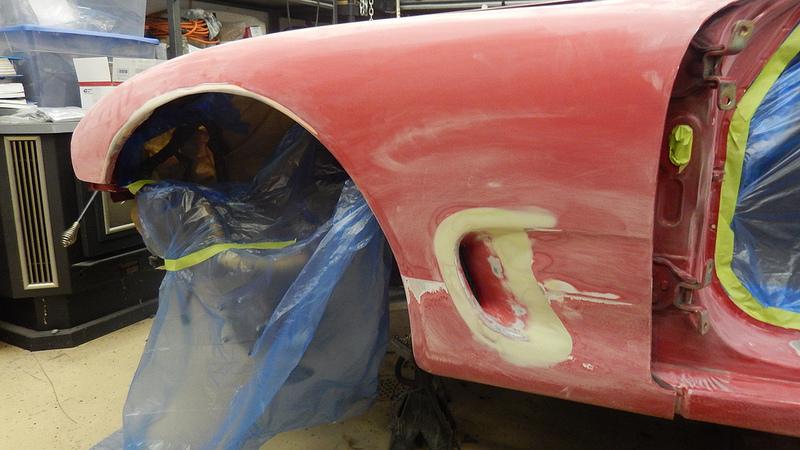 A family affair..love it! Thanks for sharing!