I've been obsessed with getting the engine and t56 as low and far back as possible. To that end I raised the floor of the GTO oil pan as high as I could and still clear at least a 4.125" stroke. Then I cut the ENTIRE front cross support in the middle of the cross member out, something that I havn't seen done before. This required first, reinforcing the bottom of the entire crossmember with 3/16th" plate and then two pieces of 1x1 steel tube between the steering rack mounts. Then I cut out the step at the back of the GTO pan sump so that the back of the sump could go right up against the steering rack. 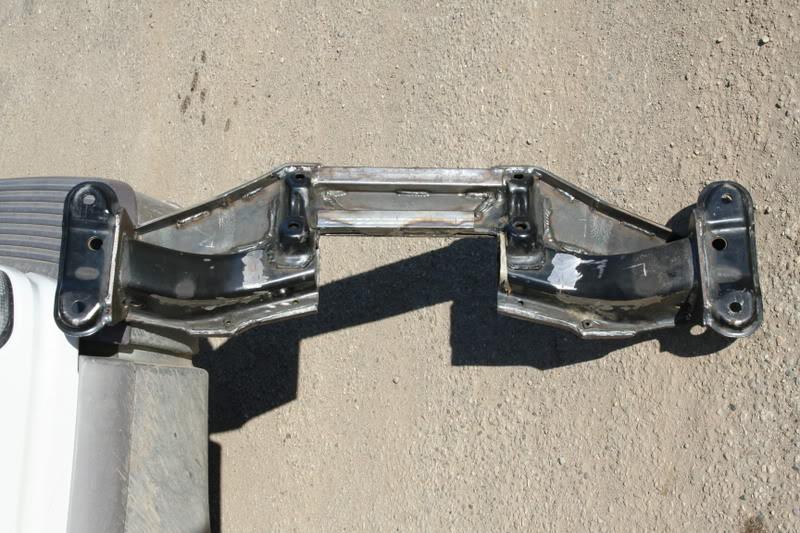 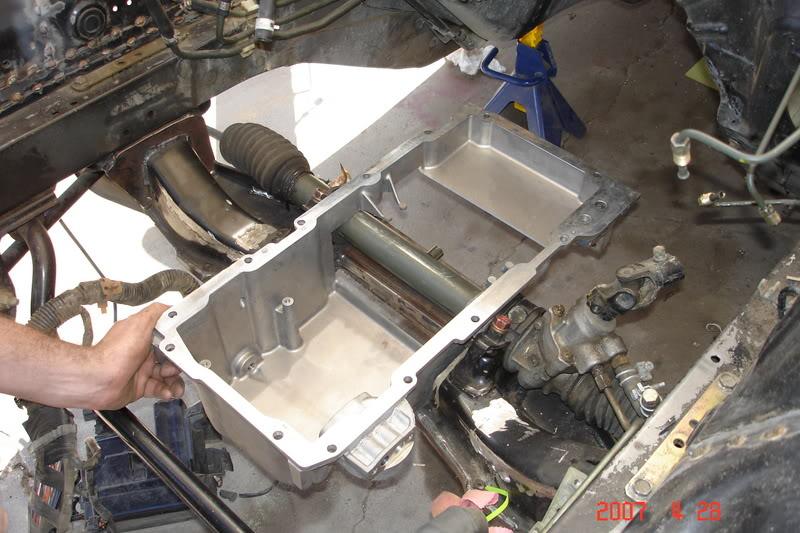 To give you an idea of how effective all this work is in setting back the engine and trans, here are two pictures of other LS1/S14s: 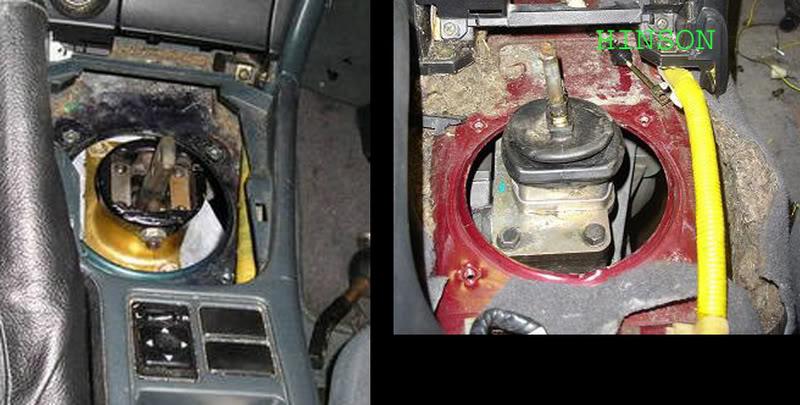 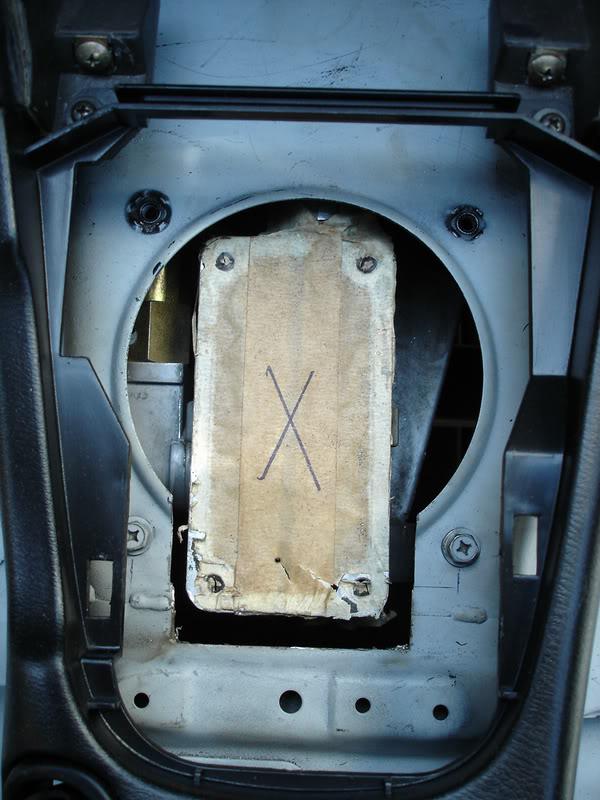 My new problem is that the engine sits so low that my GTO oil sump now sits 0.75" below my crossmember. And that's not accounting for the 3/16" that I added to the bottom of the original crossmember!

I did not lower the crossmember relative to the car, and do not plan on doing so. Now I don't know what direction to go with the oil system. I only have a junk LS6 block and havn't started the engine build so I can still go any direction that I want. I'd like to stay away from the weight, complexity, and $$$ of a true dry sump system. I have a used accusump system and originally planned on just staying wet sump, and using the accumulator for a little insurance. But the sump is sittling so low that now I'm worried about ground clearance.

I'm torn between leaving it as it is, modifying the pan to use the LS7 twin pump system, or taking 3/4" out of the bottom of the sump, maybe adding wings and baffles and staying wet sump.

I noticed that the guys with project silvia at SCC had their anti-sway bar hanging below their crossmember after installing the front whiteline bar. Maybe I should just install a whiteline bar and call it a tubular oil-pan guard?

What Dave at SCC had to say,

"The front bar hangs down slightly farther than the stock bar, but there have been no problems with bottoming out. We like to think of it as a 27-mm tubular oil-pan guard.

...we hit one of those asphalt waves that get slowly kicked up when thousands of overweight trucks stop in the same place. The ridge of asphalt was high enough to hit the front anti-roll bar, lifting the car off the ground, bending the bar's pivot bushings and slamming the bar into the oil pan. The stock steel pan escaped only slightly dented, but we fear an aluminum pan would crack under a similar impact. If you're going to be sloppy, haphazard drivers like us, steel may be the way to go."

My engine sits further back than an SR so I think I'll be alright in that regard, I dunno? 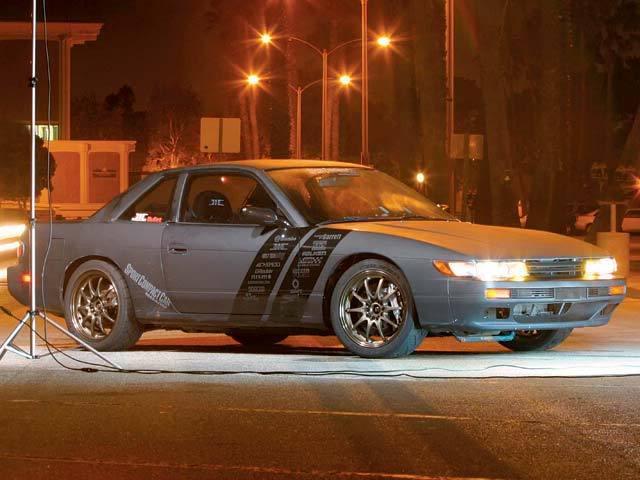 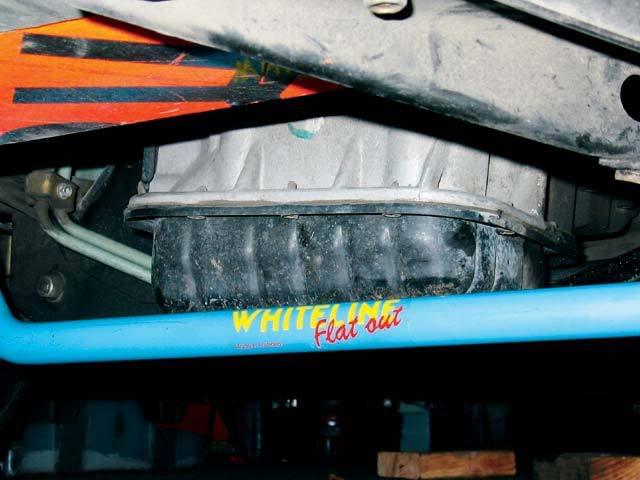 What do you guys think?

The clearances all around the trans are super tight in the tunnel, I couldn't raise 'em even if I wanted to. 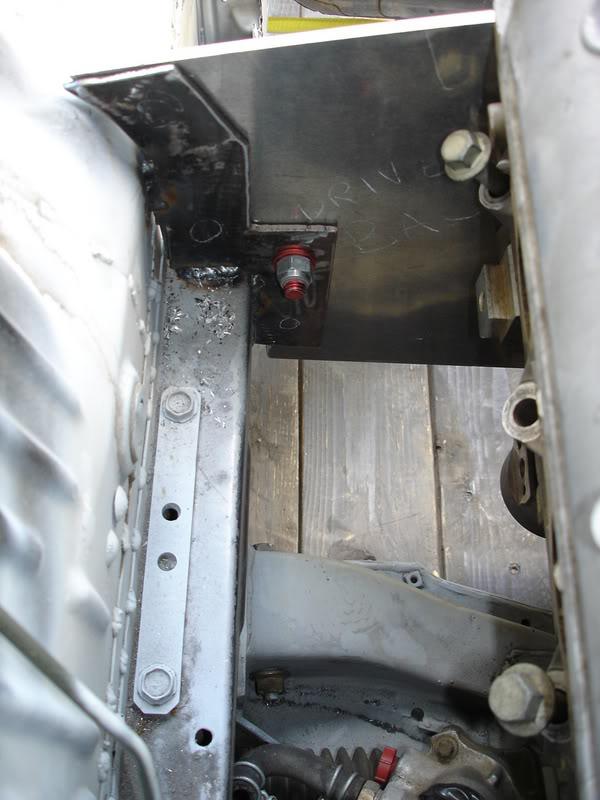 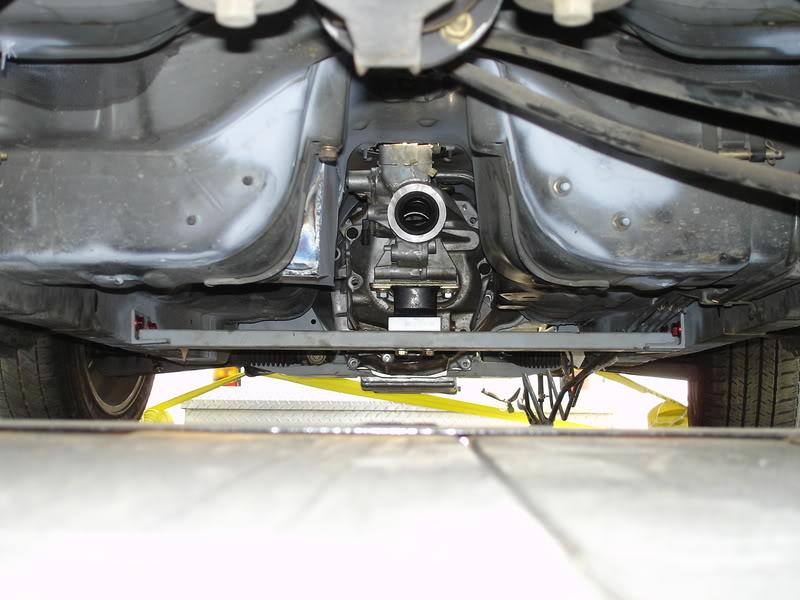 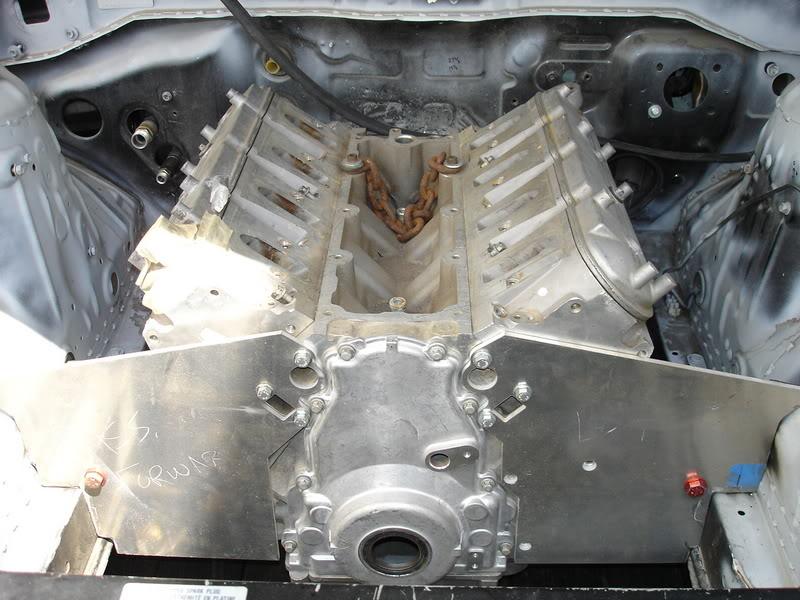 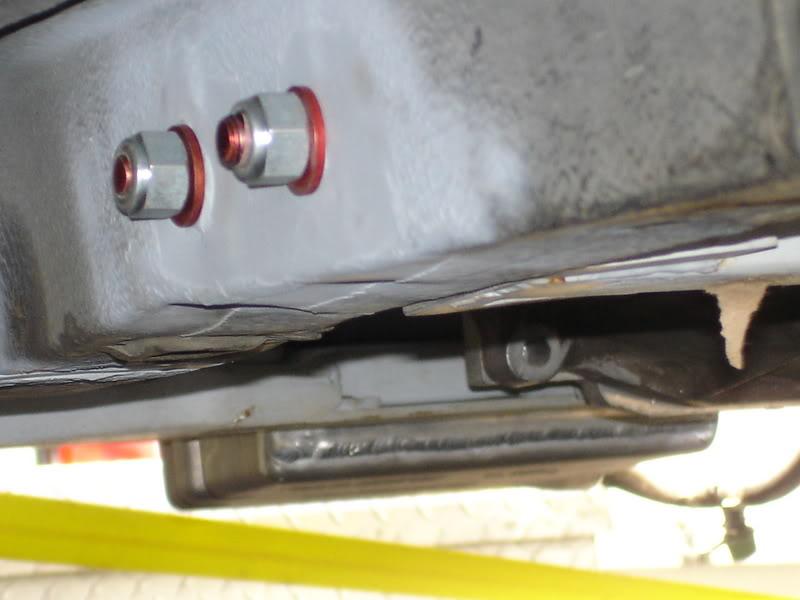 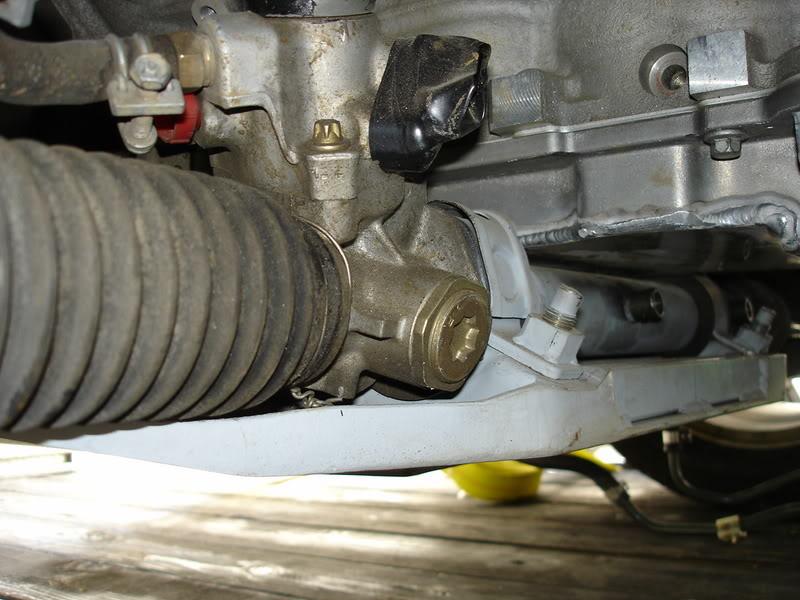 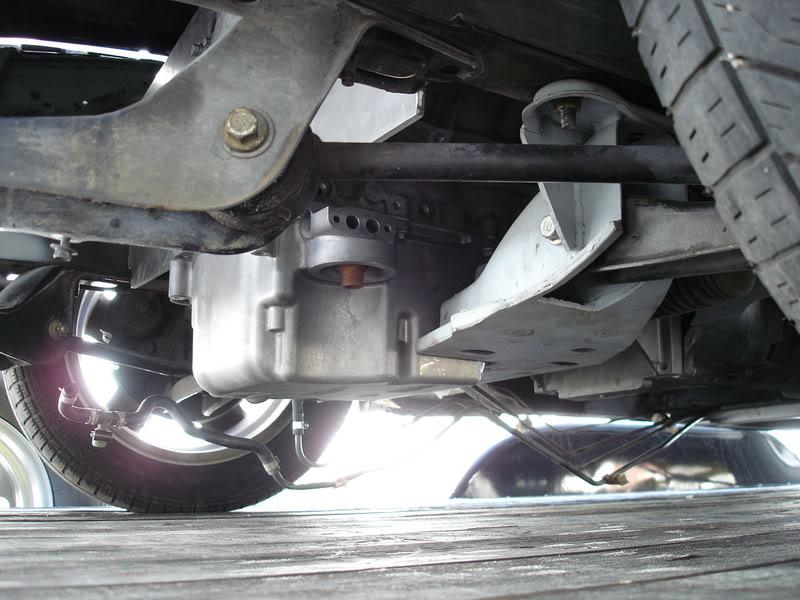 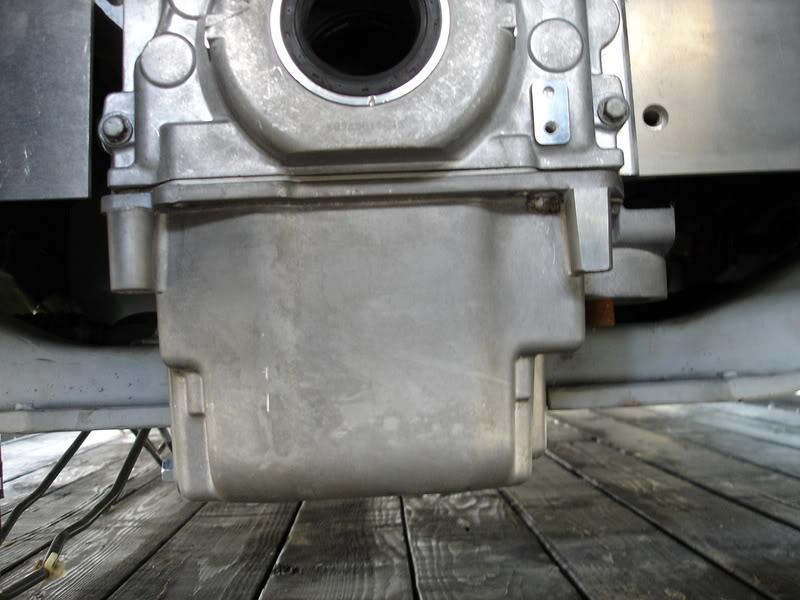 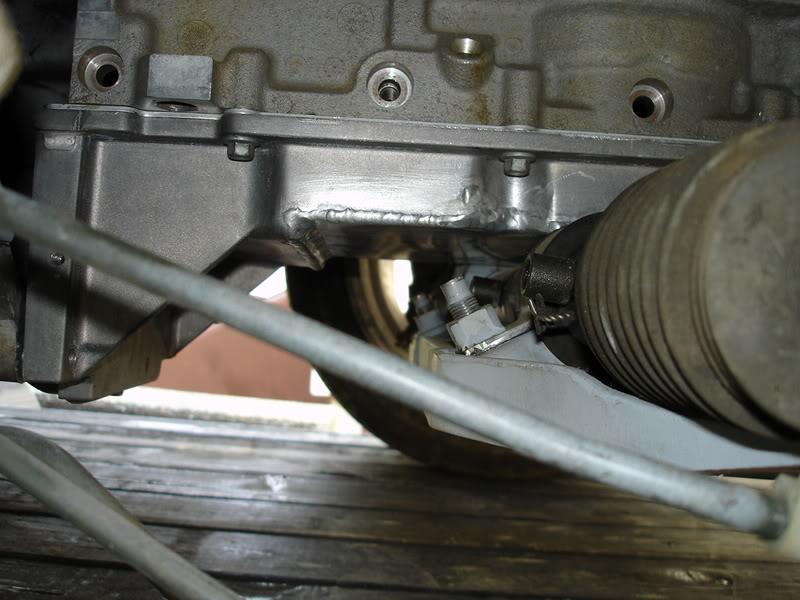 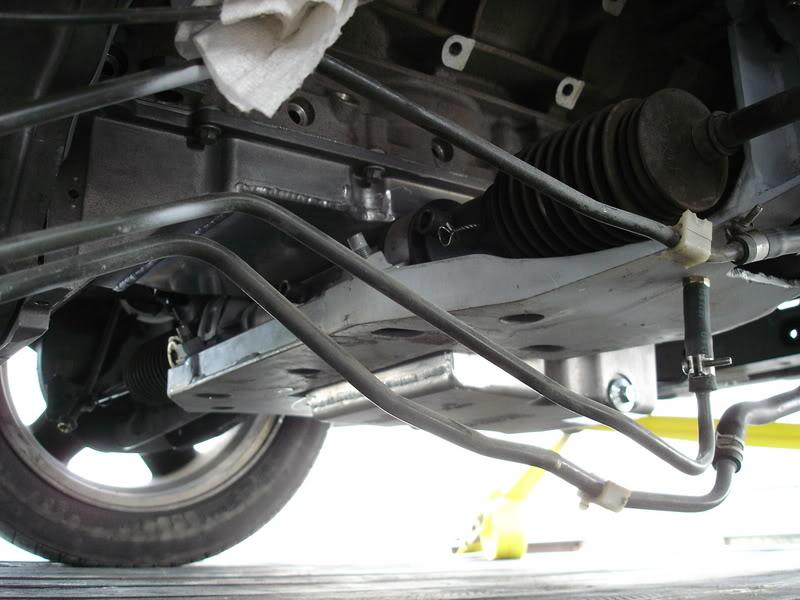 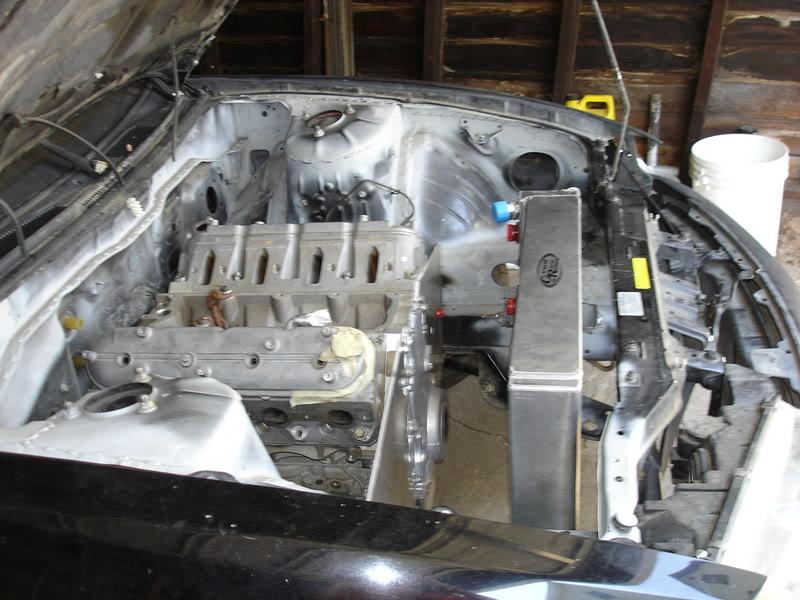 Right now I'm leaning towards staying wet sump and adding some side wings with baffles and these one way valves from billet fabrications out in Simi Valley California. 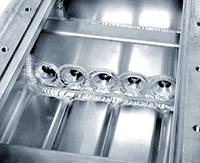 These guys make beautiful custom oil pans, plus they are near my old home town. Any one ever used their stuff?

I had to move so I'm still setting up my garage. Bought a new air compressor, and a new welder is in the works. The miller dealer is having a big show and tell day where you can try all the different welders next month, so I'll probably wait till then.

The LS7 heads are still with Richard over at WCCRH, and I just scored an LS7 intake on ebay for $200. I told Richard that I needed to go semi budget on the heads. He has a cnc program for the exhaust ports that add about 25cc/min of flow for $300, and he also has ti valves for about a grand. I will be getting neither of those. The heads come CNC'd from GM and I'm hoping to get away with spinning those rediculously large 2.2" intake valves to 7500 rpm with good ol brute force via WCCRH monster 1.450" (a big block chevy style) dual valve springs. The springs will require a little maching of the seats. The valves will most likely be manley stainless. They are heavy just due to the size.

My Old Speed inc billet LS1 fuel rails come no where near lining up. Now I just have to deside if I should Fab new mounts for the rails or if I should just get new LS7 specific ones?

It's also about time I got my ohlins rebuilt, so they should be going down to South Carolina here pretty quick. I made a really strong plywood shipping box, because the are my new "Precious."

And the last little thing, is that I just picked up a new steering shaft universal joint from the nissan dealership out here on rt 46E. The little POS was $90, but the old one was a little notchy, and there's no point in cheapin out now. I also have a set of 2006 LS2 GTO headers that I've bolted up. I'll see if the drivers side will clear some the steering rack u joint that I just got. The passanger side sticks way out and hits the frame rail, but there are no other clearance issues, so I think that a vette LS2 manifold would be fine on the passanger side. I'll keep yall updated.

Well here is the cam that I cam up with and the engine specs all nice and neat thanks to the "Quick and Dirty Cam/SCR/DCR Calculator Spreadsheet Modified and Simplified by PianoProdigy" that I found somewhere over on LS1tech.com

The plan was to build a cam and motor that would make a ton of horsepower, but have less of a tire shredding tendency to help with traction out of the corners. Redline will most likely be 7500 rpm. I fear giong any higher because of the massive (read heavy) 2.200 stainless intake valves, that I have to use due to budget constraints, in the LS7 heads. I'm also using a milder lobe then most: the older comp "Xtreme RPM for LS1 Hi lift" Which will produce 0.630" lift on both intake and exhaust with the stock LS7 1.8 rockers.

I'm guessing that this engine will peak just under 6800 rpm without much fall off to redline. I'm using a stock but port-matched LS7 intake, and custom headers. The oversquare engine comes out to 392 ci. I think that the 30 degrees of overlap should be just streetable enough. It's the late IVC that I'm hoping will curb the dynamic compression ratio enough for the hi compression pump gas combo, and simultaneously help push the peak power rpm up above the 6300 wall that so many other LS1 engines seem to sit at.

This cam is all still theoretical; the heads and intake are not. So if anyone has any knowledgeable input/ideas to provide, I'm all ears.