After complaints about the amount of oil my Sonett is depositing wherever it goes and stops, I am finally starting an engine re-build program. However due to budget issues this may take some time so don't hold your breath anyone!!

I acquired a sadly neglected mid '70's 1500 V4 engine sometime ago which looks as if it has spent most of it's time outside! Anyway I removed the flywheel a few weeks ago and cleaned it up ready for machining. I want it lightened but not quite as much as I did years ago with my rally car. The idea is to build a performance 1700 spec engine but still maintain flexibility for normal road use, i.e I don't want a tick over in excess of 1000 rpm. 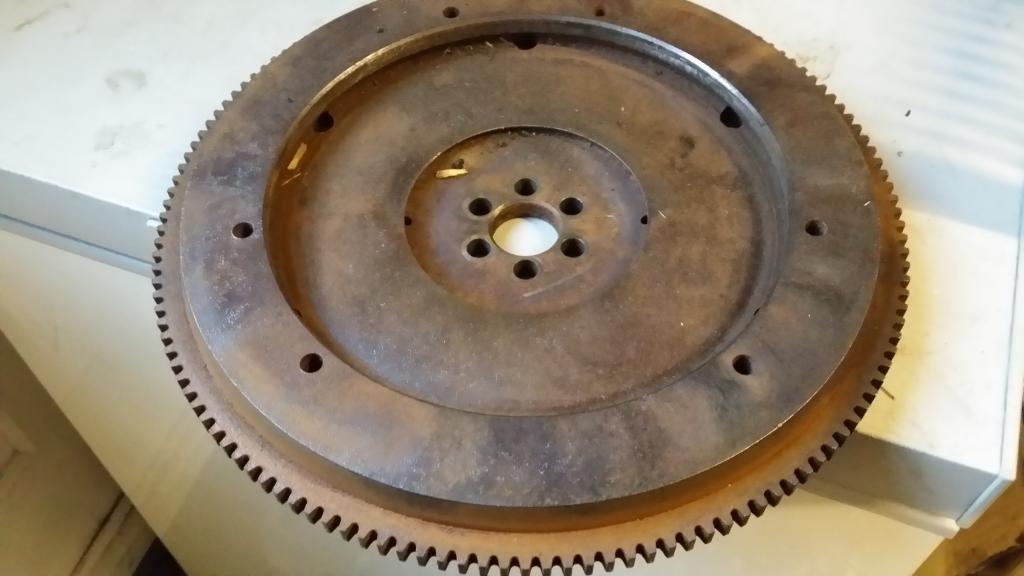 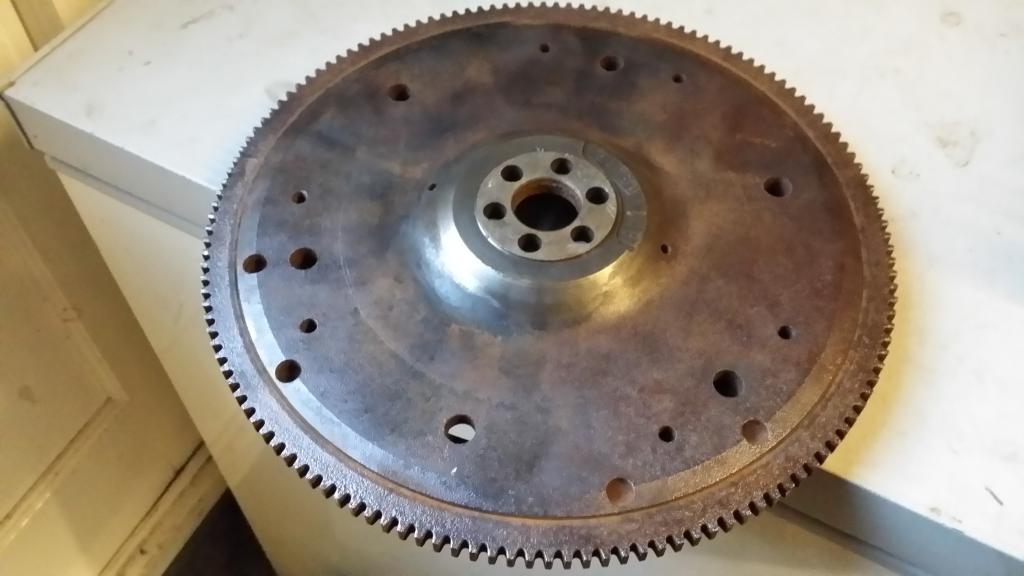 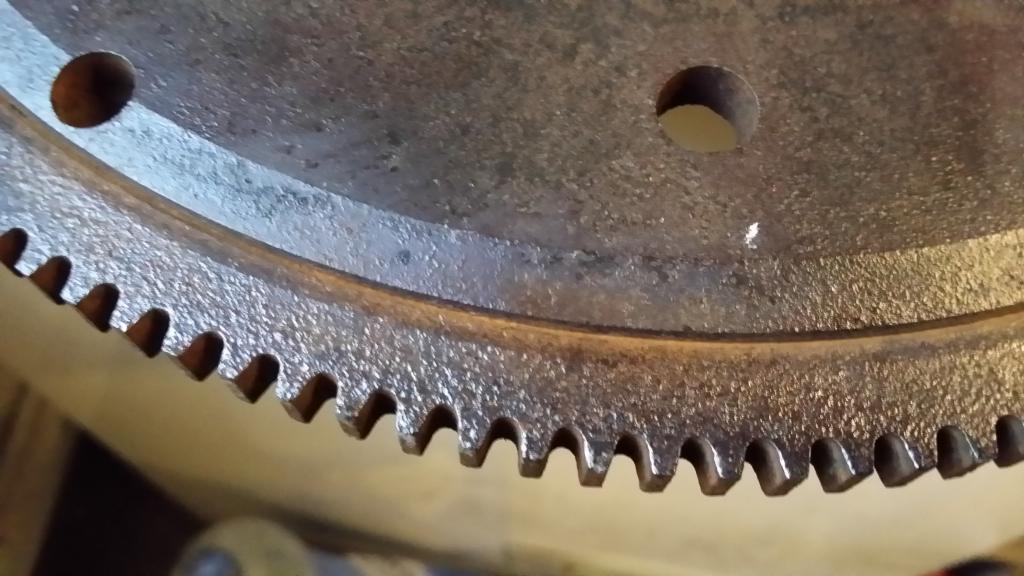 A bit scabby but should clean up OK.

The engine is seized up due to the length of time standing so yesterday I removed the RH cylinder head. Not a pretty sight: 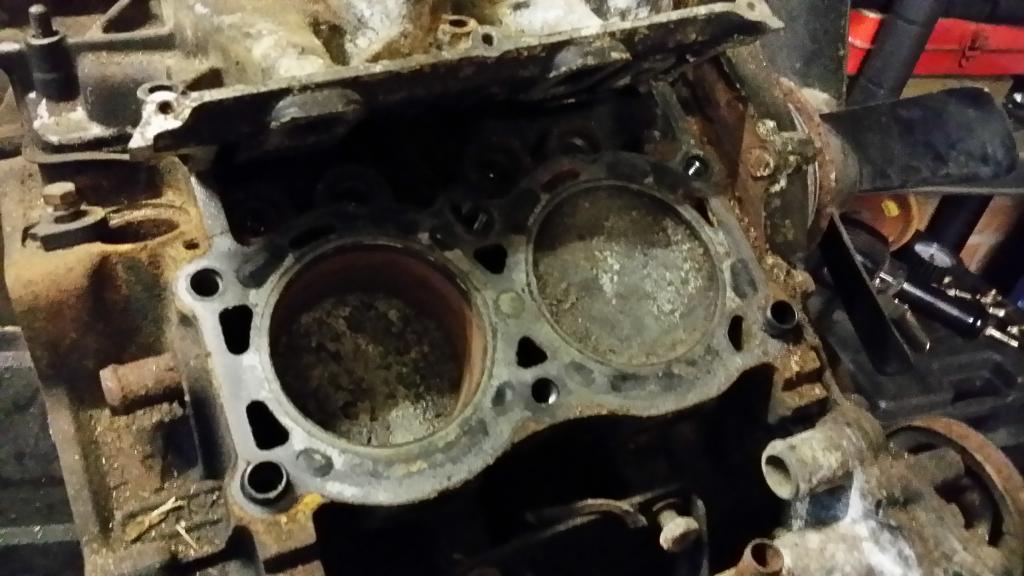 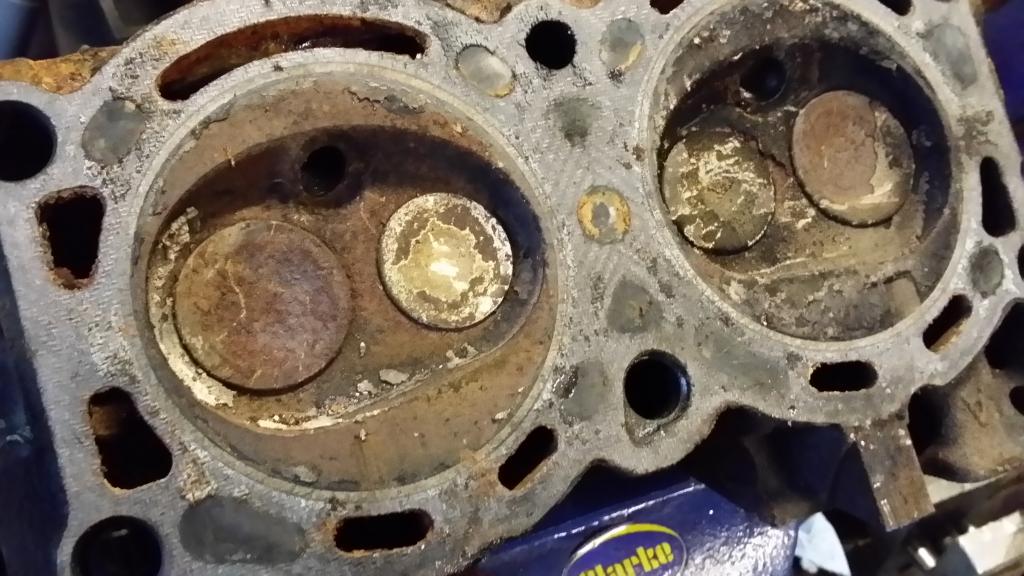 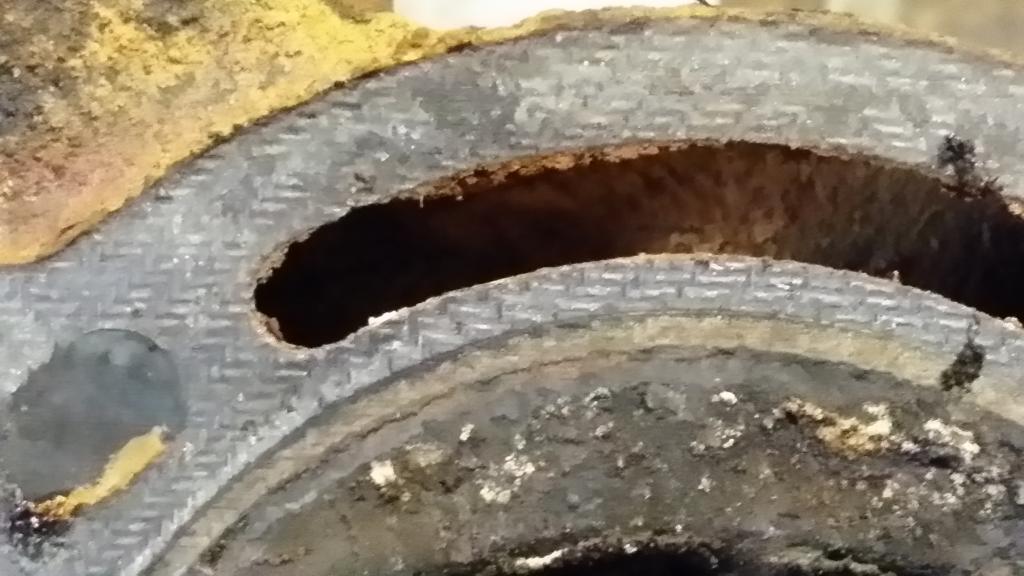 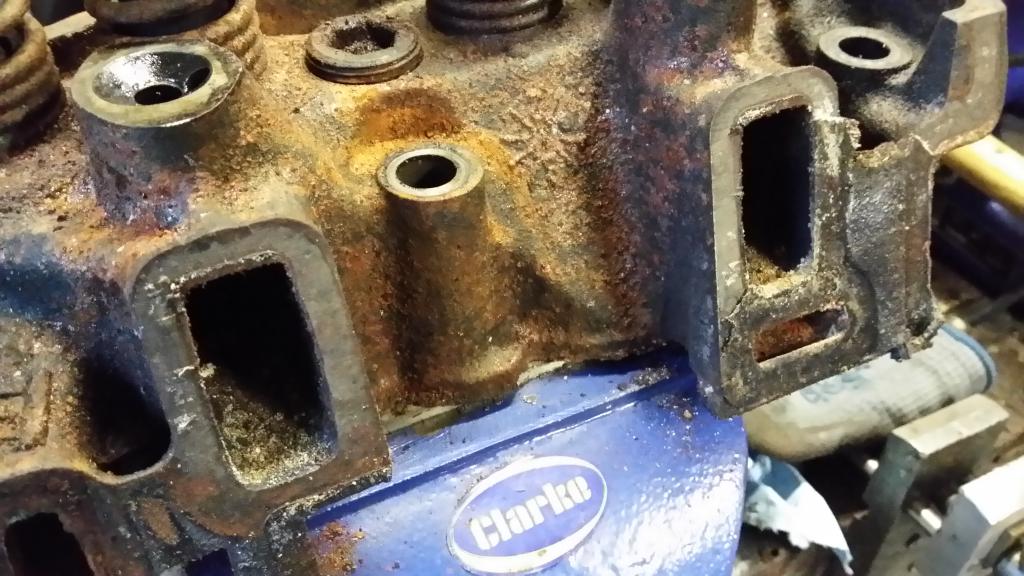 My idea was to machine these cyl heads and block and get it all ready with new pistons, bearings etc so that when I finally get to remove the front end of the Sonett and take the engine out, the off the road time will be limited. I will of course need the 1700 crank from Sonetts existing engine to complete the build which may or may not require a re-grind.

So having got one head off and seeing the state of the waterways and exhaust exit flange I'm wondering whether or not it has gone back to nature too much? I would obviously shot blast and clean out the waterways as much as possible and machine the head face and open out the combustion chambers, replace valve guides and seats etc - just wondered what anybody who may have done this on an old stored engine before thinks? I don't need to use this engine as I can re-furbish my original, but as I say I just wanted to minimise off the road time and it seemed like a good idea to get machining done a bit at a time as and when given the limited budget. 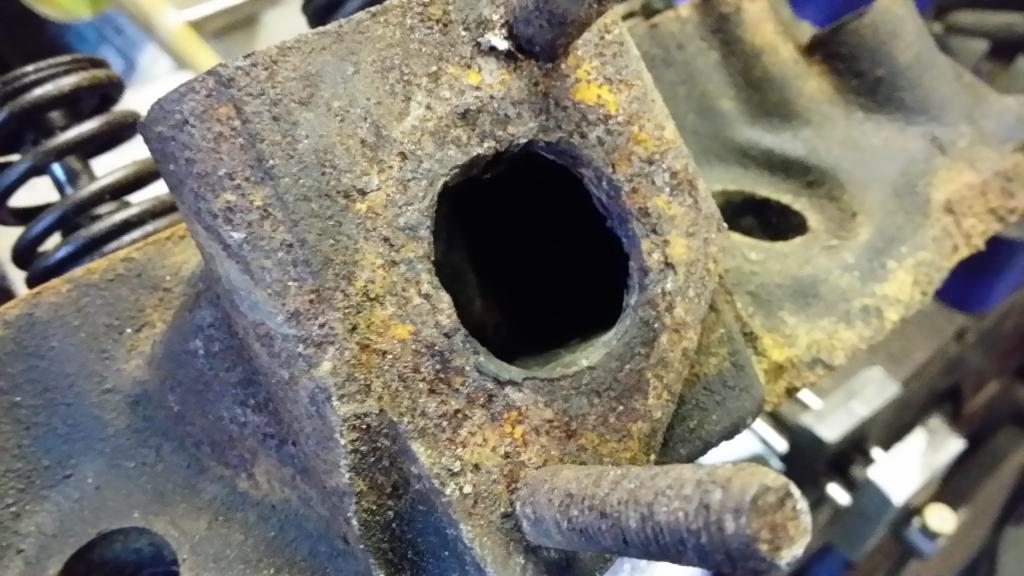 So what do you reckon worth cleaning up or scrap it?

Well agreed Derek, if it was "just for an oil leak" - there are other things I hadn't mentioned!! The fact is that the existing engine has just cleared 105,000 miles, the sump is dented so the flanges aren't true and have always leaked a bit, but now the oil seals are going all round, clutch starting to slip etc and on top of that one cylinder is down on compression. Blow by is pretty bad too judging by the haze under the bonnet - so it's time for a re-build. It used 2 litres of oil to get from Warwick to Neo's open day - the only good thing being that the front end of the car and half way down underneath are well and truly rust proofed!!

Trouble is the car is performing better than it ever has, probably due to the lack of friction in the engine!!! So for that reason I'm keeping it going as long as possible hence my idea of using the castings in this salvaged engine (even if it looks as if it's been at the bottom of the sea!) for a re-bore and a chance to modify the heads which I wanted to do anyway.

Anyway I'll take the other head off strip the internals and then see what the block is like when cleaned a bit more. If both heads are too badly pitted then happy to use my existing ones. It's only the re-bore that requires professional services I'll do the rest myself.

Bit of an update but I didn't get anything done over Xmas as I expected. Anyway took the front cover off and the timing gears are all in good condition, no play in the balance and camshaft bearings either although they will all be replaced. 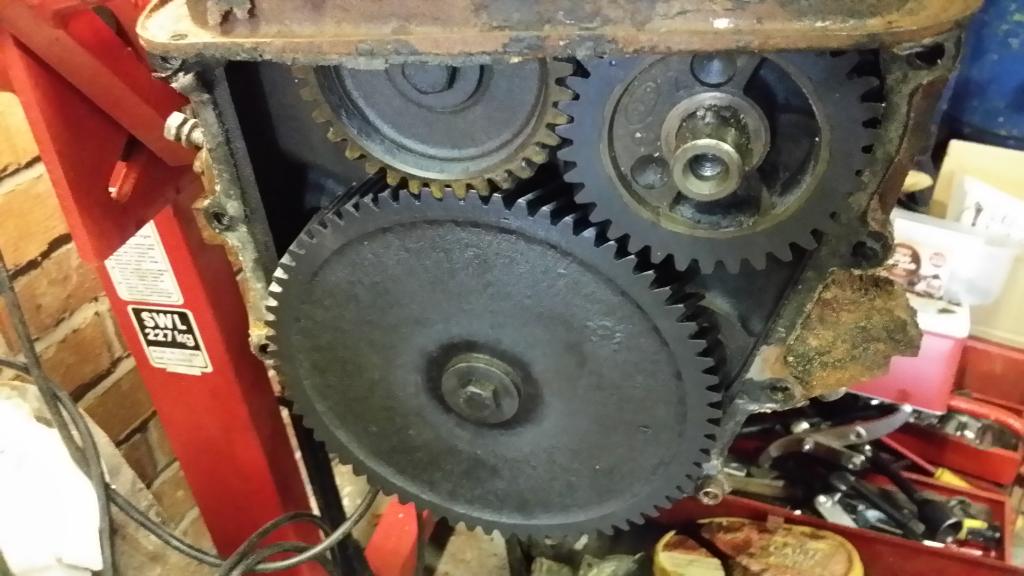 Bit of a surprise when I turned it over to remove the sump, clearing all the crud off the bottom of the sump (probably where it had dragged over the sea bottom in it's role as an anchor!) I found a hole! 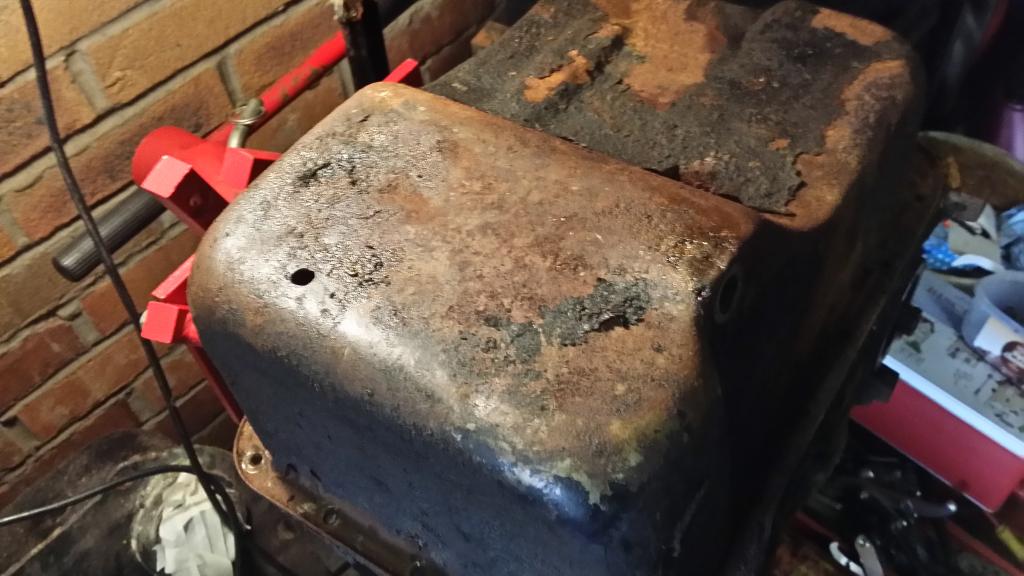 Not amused as the sump pan was the only other thing I wanted apart from the castings as my current one is so battered.

Anyway off came the sump to reveal this 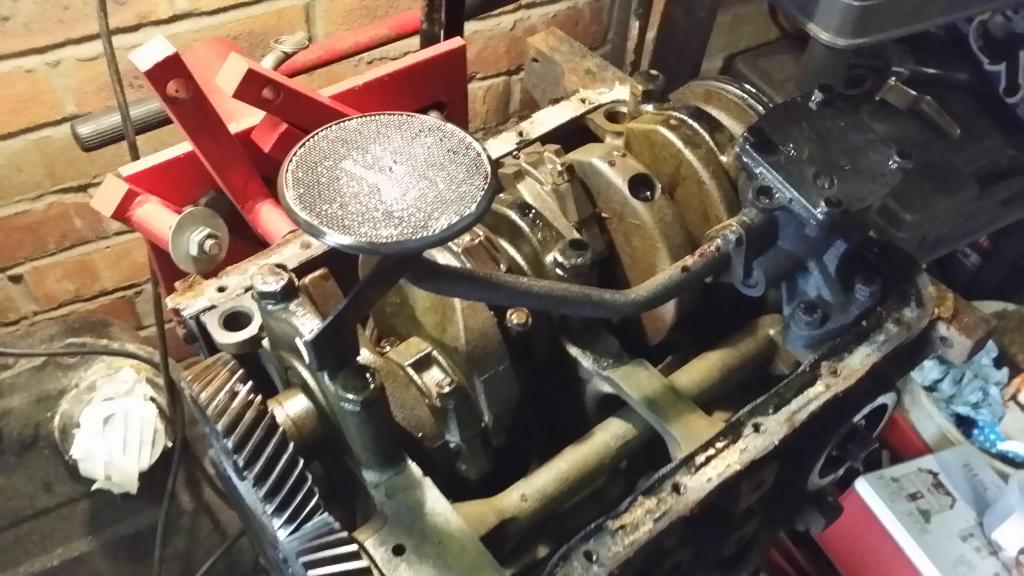 A clean set of innards with no evidence of bearing wear - not what I was expecting! 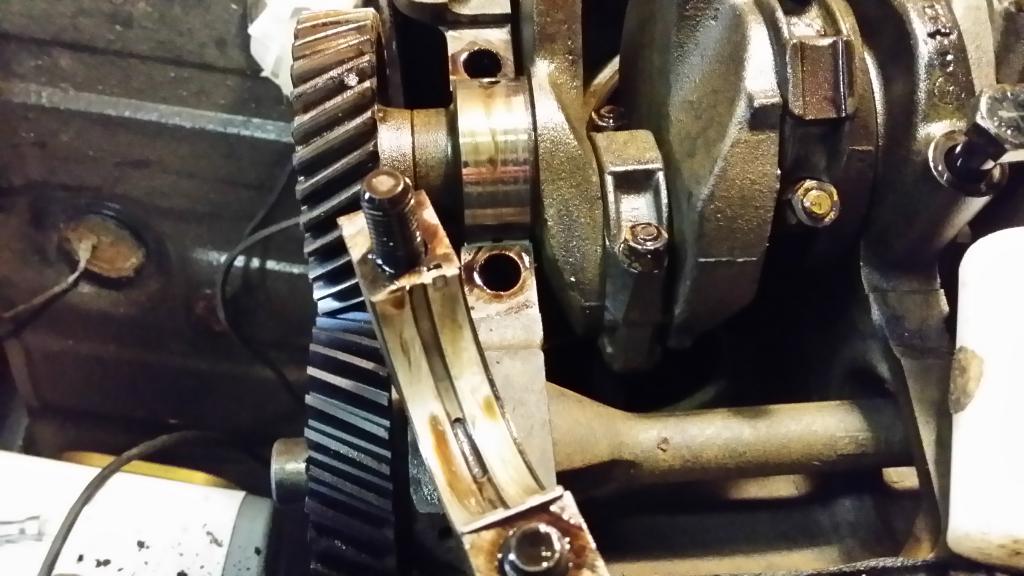 The oil ponged a bit but it's done it's job and kept the bearing faces rust free. No grooving or noticeable wear on any of the shell bearings and the crank looks almost like new! 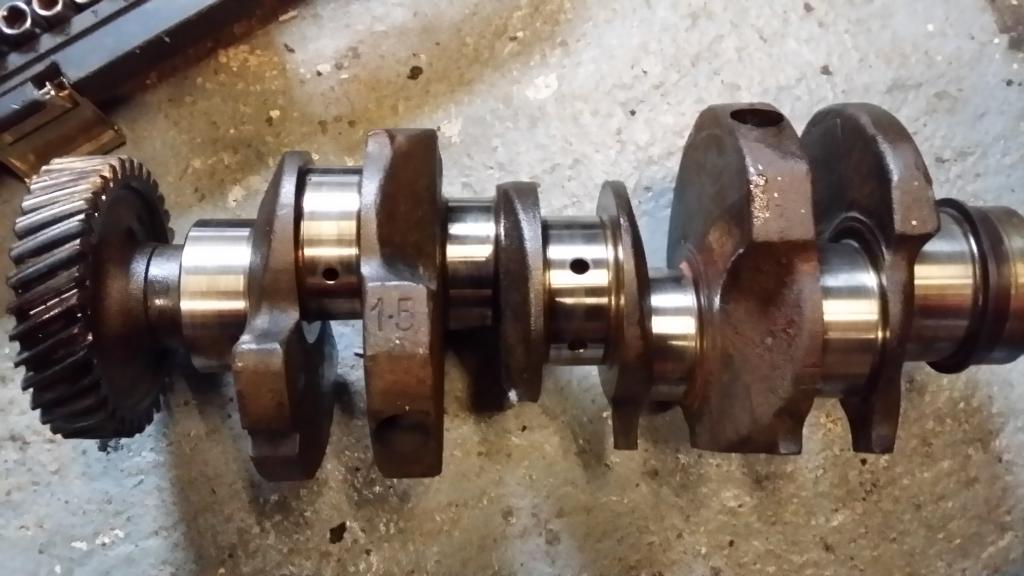 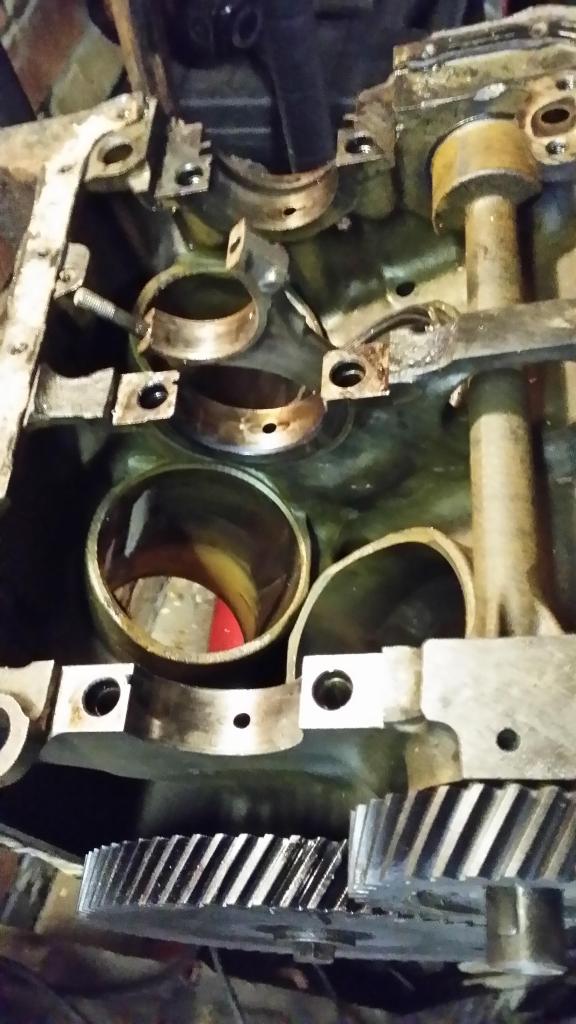 The big ends were also in good condition and the only problem I have is getting No 2 piston out, as that is well and truly seized. The others came out with a light tap once the crud on the head interface broke away to let them out. I have left it soaking so will have another go tomorrow, and I also need to push the cam followers out which are a bit stuck. I want to send the cam to Newmans as they are going to provide an exchange fast road cam.

The cylinder heads are also stripped, I got the exhaust bolts out, one had already sheared but left just enough to get a pair of stiltsons on it and with some heat and a long tube they are all out and in the bin. Always replace those with hex cap heads anyway.

Next thing is to bite the bullet and find out how much the machining is going to cost me - there may be another long pause in progress!!

Still can't get this piston out any ideas? Thinking I'll have to drill out the crown and cut down one side!

Thanks for the helpful suggestions. It's right at the bottom of it's stroke but I guess it will go a bit further. Been knocking it the other way but the gudgeon pin is damaged now so it's not giving up. I'll try the heating method as well so will have another go soon.

I'm definitely opening up the heads and ports Woody but am still undecided about valves. I only have a 28/36 weber so might need a bigger carb with the bigger valves? I have had my eye on those new 32/36 ones from Newport, good price but adds to the overall cost - still a bit at a time, I'm not in a rush.

Current weber is OK and performs well but just thinking if I do go the bigger valve root then maybe I need a bit more fueling potential. Had the 40DFI on the rally car but they are difficult and expensive to get hold of now.