I like that it doesn't look like a girl's car - ok, except for the E-4AT lol don't hate - and plan to keep it that way.

Just over 2 years since I bought the Shoopster and started this build thread!

Before the Shoopster, I knew next to nothing about cars, let alone WRX. The Shoop came with a Turbosmart BOV (that kept getting stuck), some garden-hose setup in lieu of the oil vapor tubes across the intercooler, an AEM air intake in the fender (that I worried about flooding in the smallest puddles), a busted up-pipe, and a fart-can stuffed with shredded fiberglass with a silencer. I gradually returned it to somewhat stock and we're finally onto some real mods at #21 below. The Shoop is not so stock anymore

I take pics every time I park next to another Subie

- radiator from a jdm STi (repair/replacement)

Here's a general menu, in case you want to skip the BS'ing (err, I mean experienced advice and witty banter):

8. A few blue touches: LEDs above the license plate, and COBB oil cap. The 3-gauge pod pillar and AEM air intake came with the car.

10. Stock '02 catback scrubdown: Purchased a used OEM because I'm considering replacing the fart-can that came with the car

11. Roof rust removal and paint, and an overall compound/buff.

13. The Chapter In Which We Finally Have Boost!

23. Brembos installation and everything that can go wrong.

24. Fender rolling and Brembo-clearing V7's for the winter

- bottom grill in the new bumper

We ordered an eBay jobber, but it turns out it's a good pipe, not one of those nightmare-mesh-interior ones that shred.

Either end of the pipe was a little warped, it needed to be grinded and leveled for a perfect seal.

And we pulled out this piece of shrapnel still attached inside to the sensor bung.

(Lesson here: feel around the inside just to be sure it's smooth.)

Lastly, we plugged/soldered the bung and leveled the nub that remained on the inside. 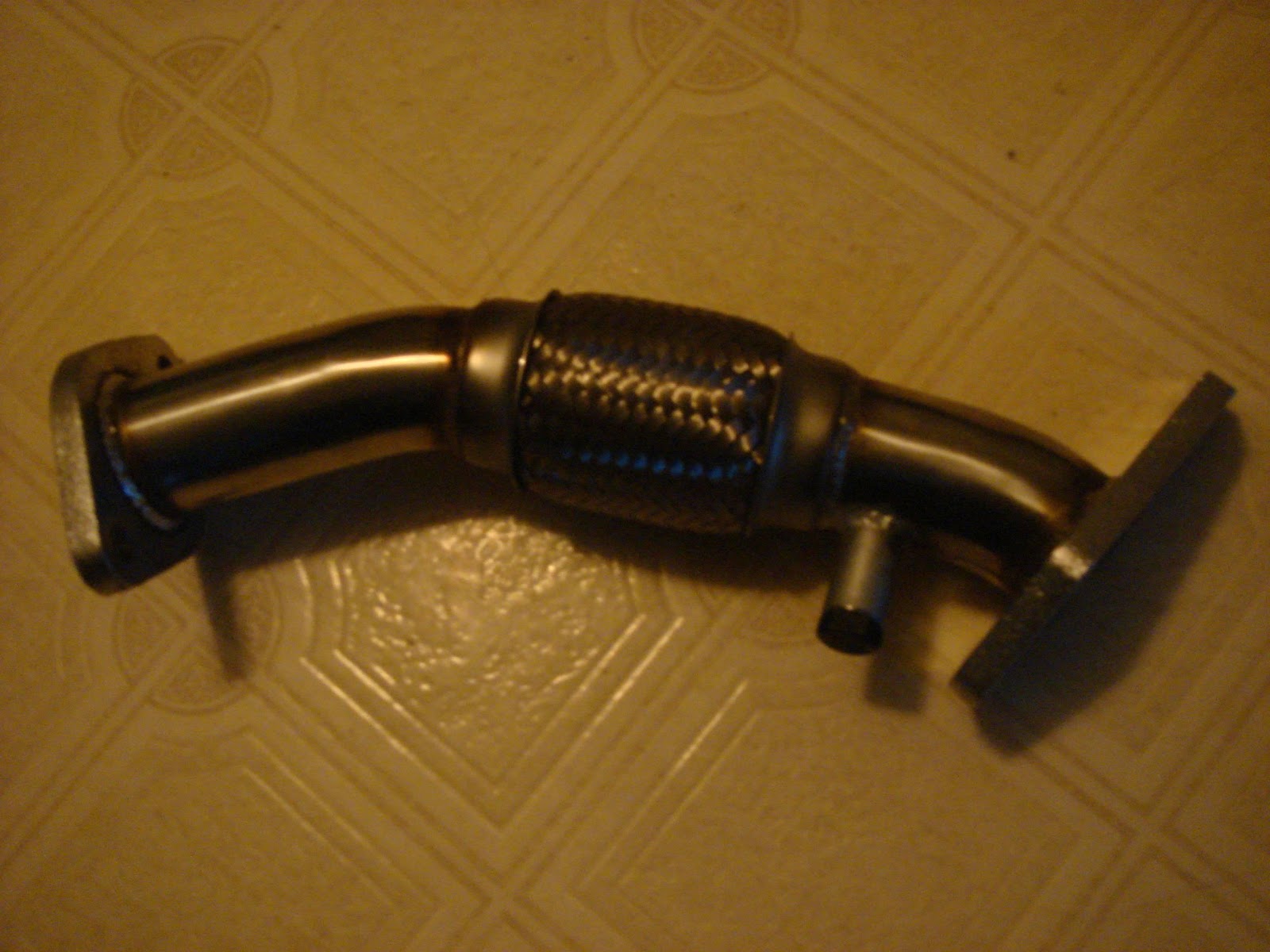 We wrapped it (then read not to over-wrap it, and) unwrapped it, re-wrapped the non-flex sections per advice (then read that wrapping only one piece can over-heat that piece and the adjoining parts) and unwrapped it again.

Shrapnel picked off the inside, gadzooks! god save my turbo. 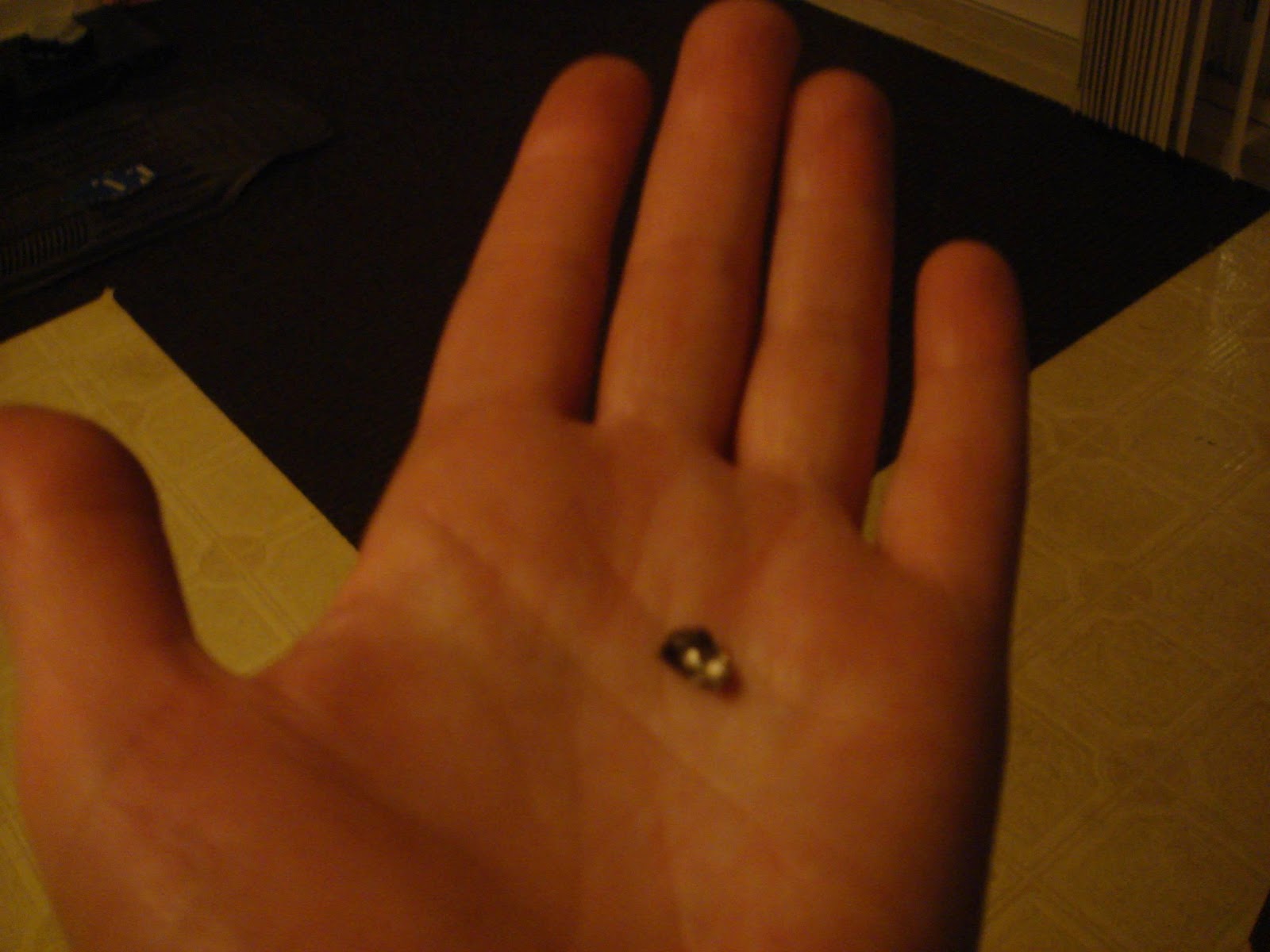 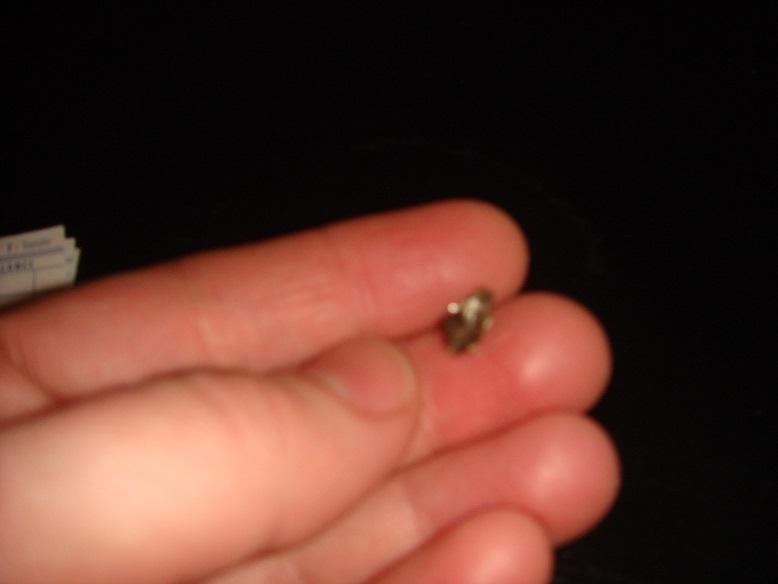 Up-pipe gasket, not a perfect fit, the holes needed to be adjusted/widened 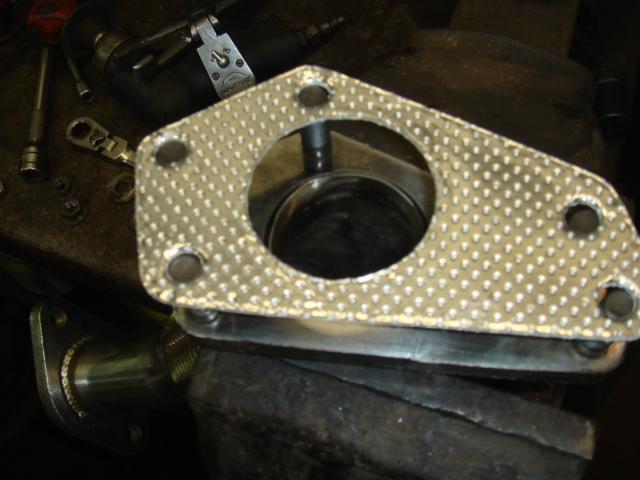 The torch marks are from opening it, we had to see what was going on inside. Old up-pipe was cracked clean in two. 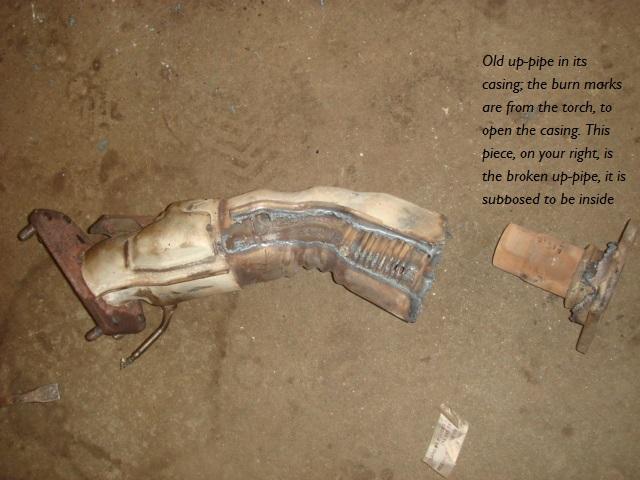 and the mess inside it 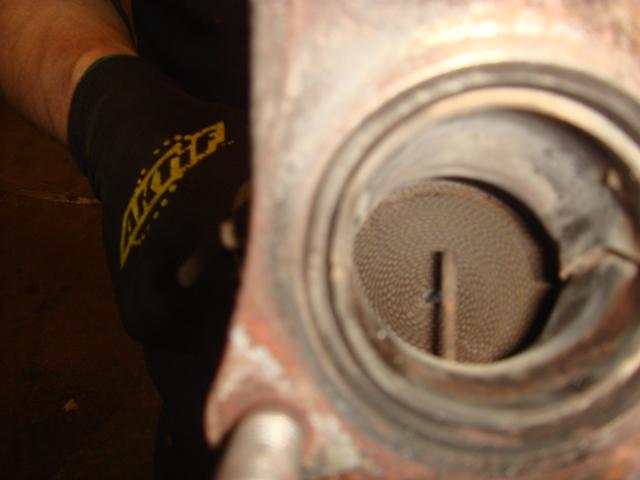 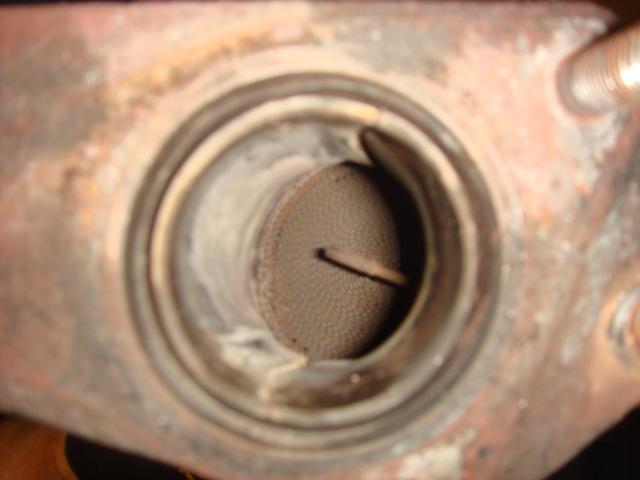 Sensor bung inside the new UP before & after, leveled/smoothed to reduce turbulence 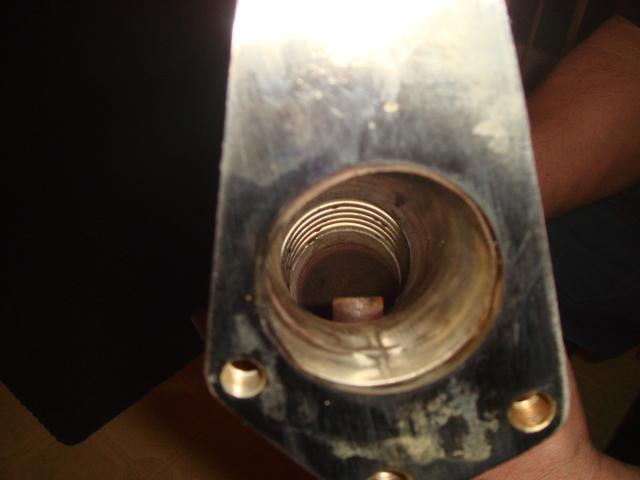 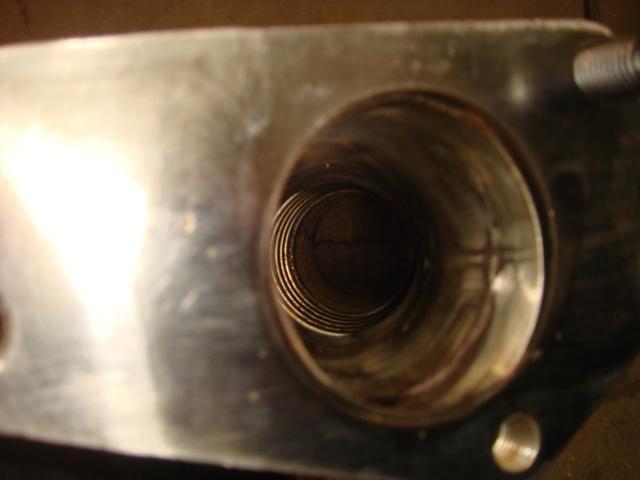 We also did the electronic fix since the EGT sensor is removed (details here). These cost a whopping $1 for 5.

---> Interesting side-story to (and likely cause of) the cracked up-pipe, and I had this terrible throttle lag, took forEVER to take off. About a week after changing the up-pipe, we noticed this awful sound coming from the exhaust (it was embarassing, even). My muffler was stuffed with shredded fiber-glass and I don't think they did it right. We pulled out three foot-ball sized bunches of what looked like the kind of stuff you pack Easter baskets with. The pressure build-up in the exhaust is probably what split my stock up-pipe inside its steel casing. We removed the stuffing, the lag was instantly gone and the Shoopster now takes off like a Shoopster should. Oh and the b-e-a-utiful sound my car makes now Ah yes and the BOV also then made its BBppllllthptptptpt sound heard for the first time since I bought the car.

Good thing we also ordered a downpipe gasket, just in case, mine was cracked. 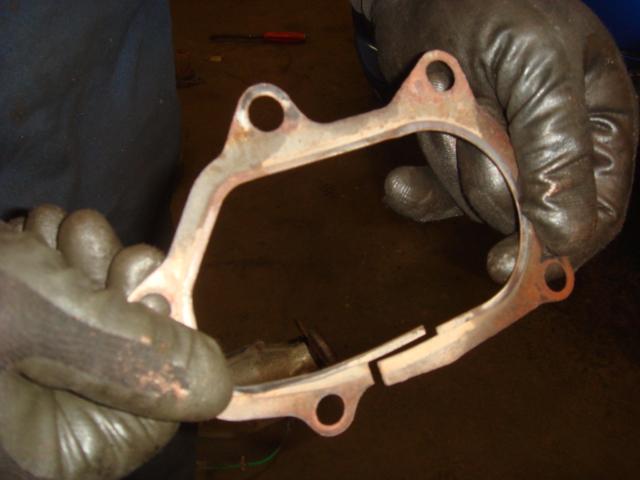 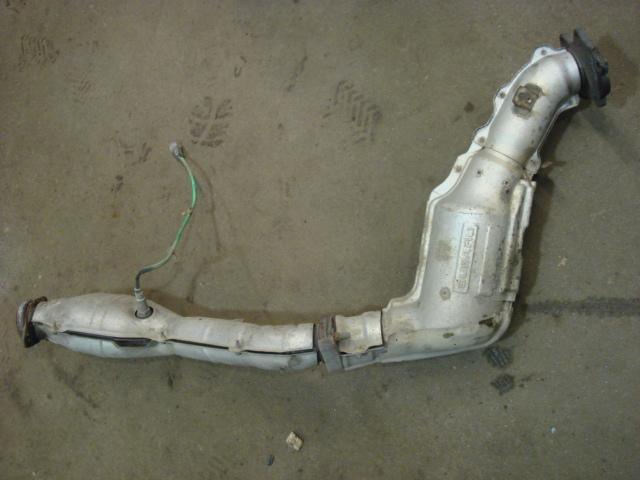 I bought the Shoop for only $7k. I think the used-car dealer knew the up-pipe was a problem (which we had found on inspection), and that there was a serious throttle lag. He didn't know about the stuffing until we pointed it out though, and I'm sure he was surprised when we told him the lag is fixed hahaa!

Job 2. New front brake discs (I think we call them discs in French. Rotors in English?)

These were a Shoopster-warming gift from my boyfriend :-) 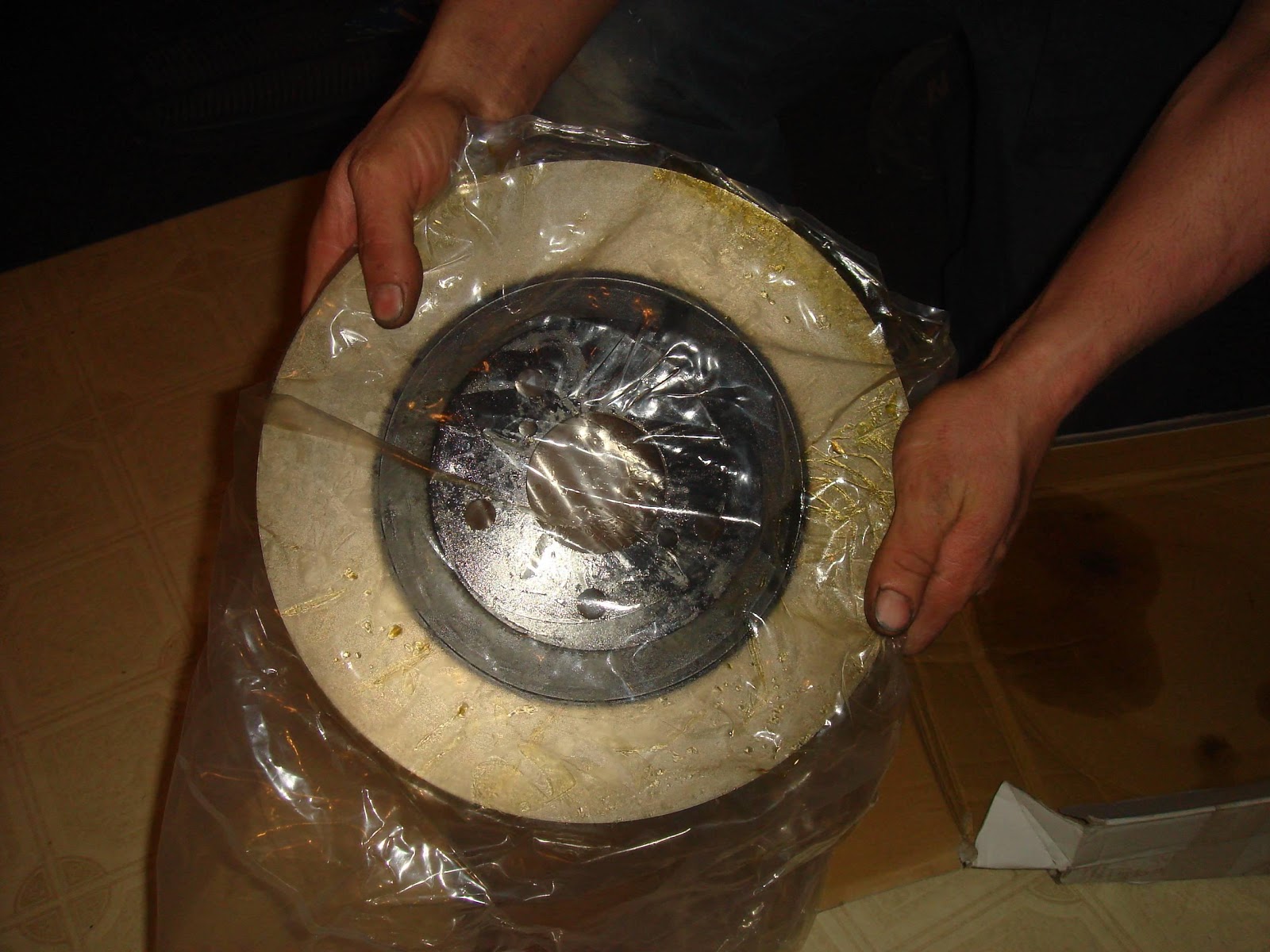 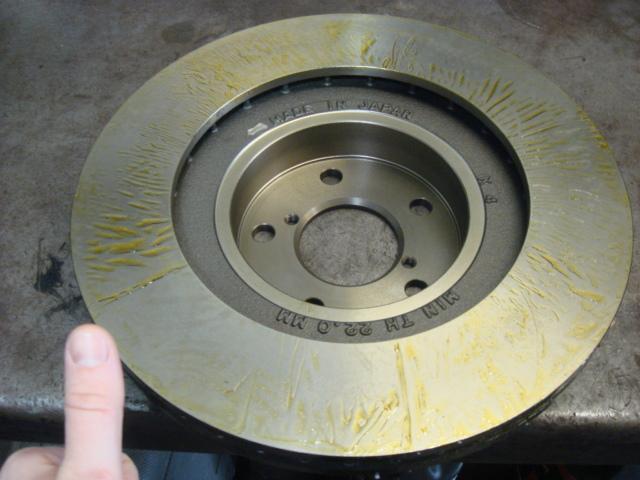 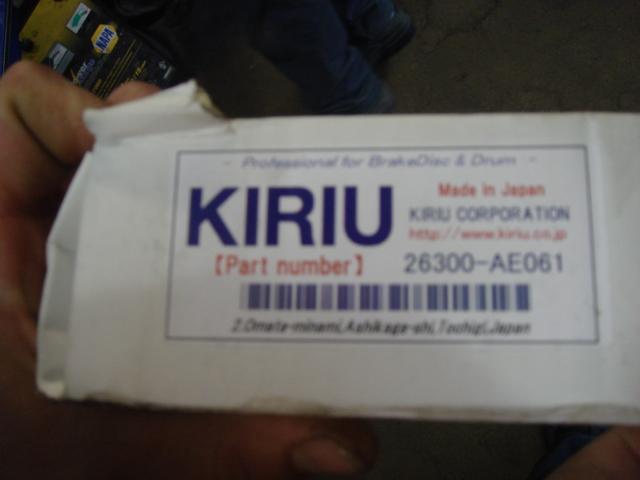 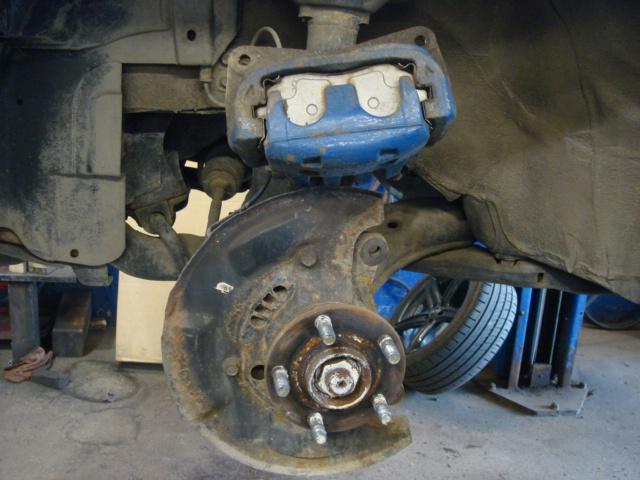 I apparently don't have a decent pic of them installed.

Job 3. Inner fender, front-left (in French we call this a "false-wing", fausse aile) 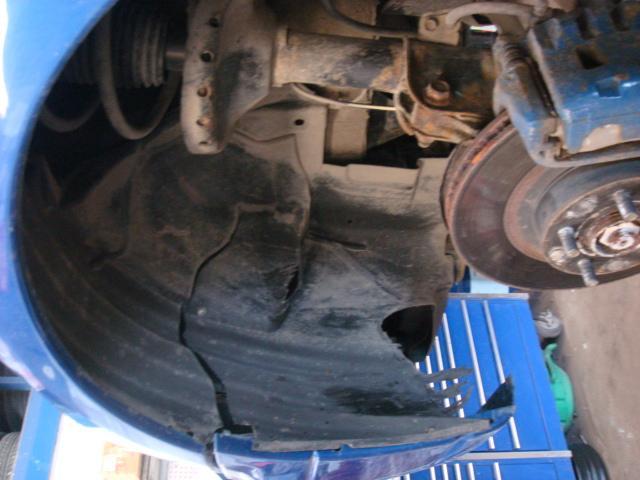 I've no idea how this came to be busted. There are scratch marks under the bumper too, I think one of the prev owners must've run up on a side-walk or one of those parking-concrete blocks. 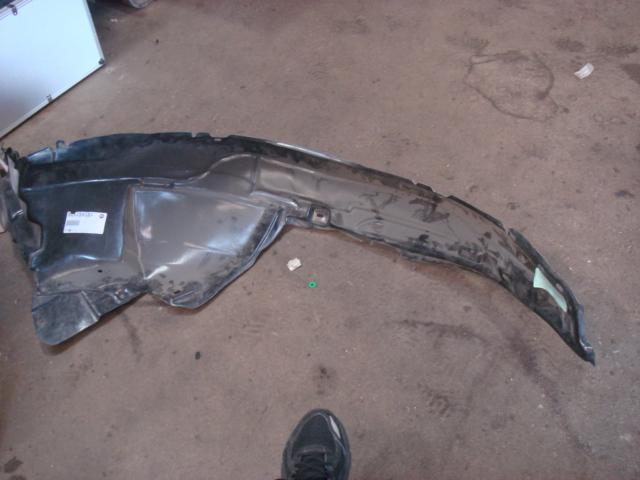 The part we ordered didn't fit properly, so we've re-ordered it (received) and Job 3 is still on the to-do list.

4. Timing belt & water pump (and accessories) purchased here. I know y'all aren't crazy about eBay stuff in general, but boyfriend-mechanic is really happy with the quality of the items received, he said it's the same they use at the garage (and shipping was faster than light). Dude's got over 100,000 transactions and 100% satisfied reviews.

5. Turbo heat-shield to be replaced ( 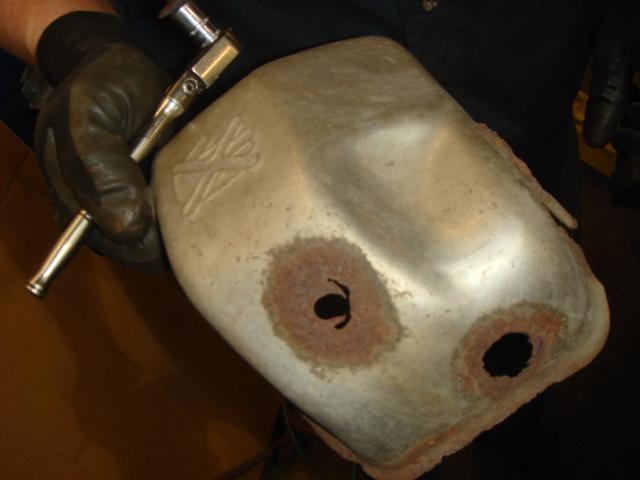 6. And the waste-gate actuator is corroded. Waiting on a used turbo hopefully...

Can't really see it too well with the shield on, sorry 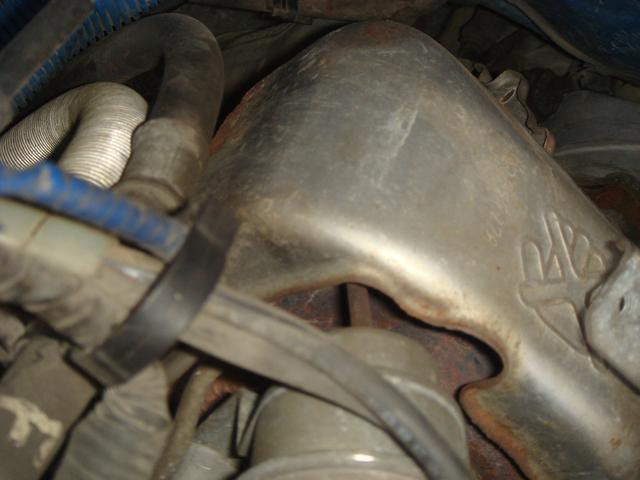 And here are some random shots of the engine bay and exhaust.

Don't laugh at my garden-hose attachments, they came with. When I can afford to replace those, they're on the list.

The exhaust seems to be a mix of stock/not. As for the rest, I'm finding out as I go.

I don't know enough to recognize stock from not, so please feel free to let me know what I've got goin' on here.... 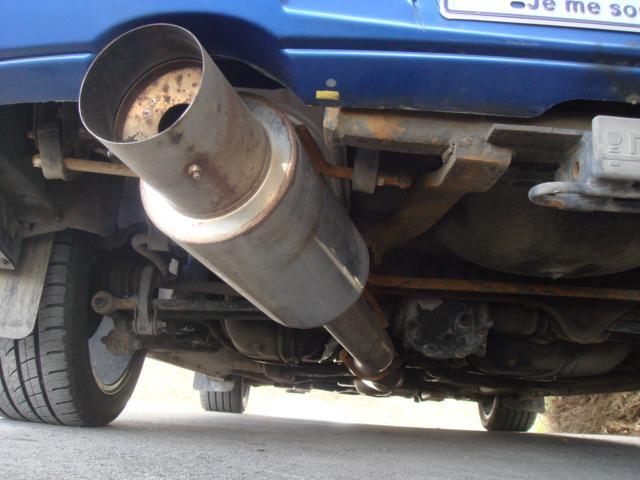 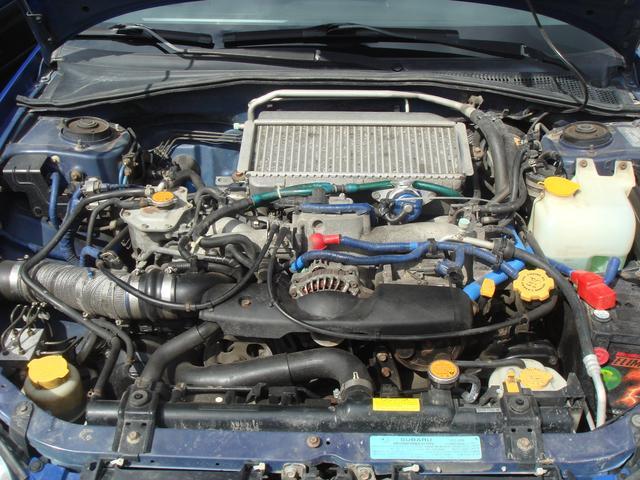 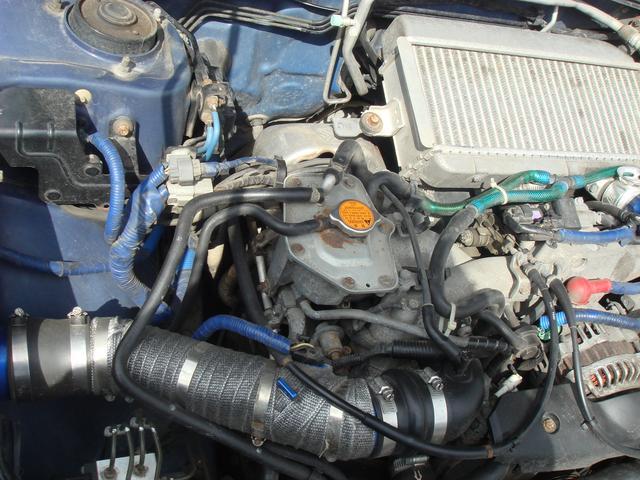 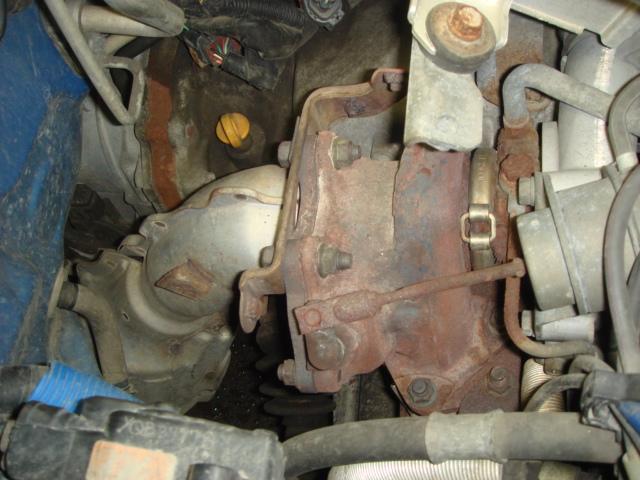 Could have probably found better prices, but buying from a single seller saves me $hipping 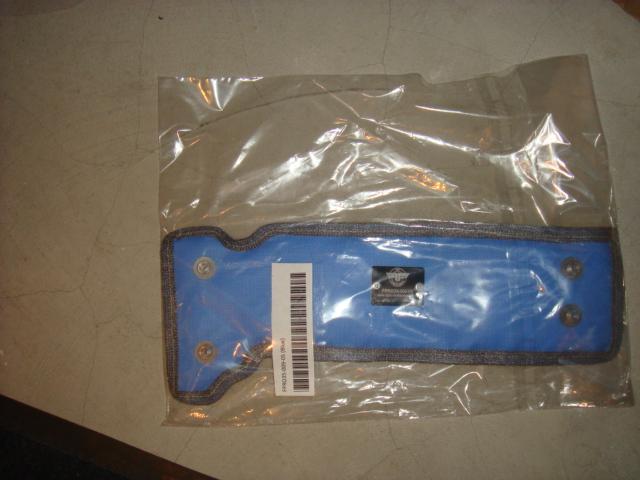 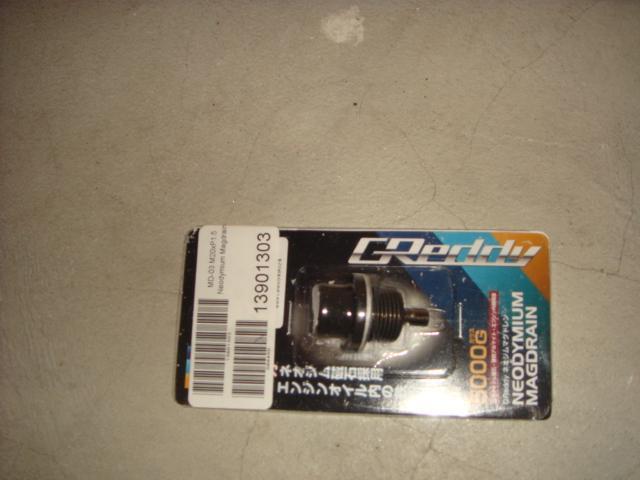 And my license plate delete from Subtle Solutions. 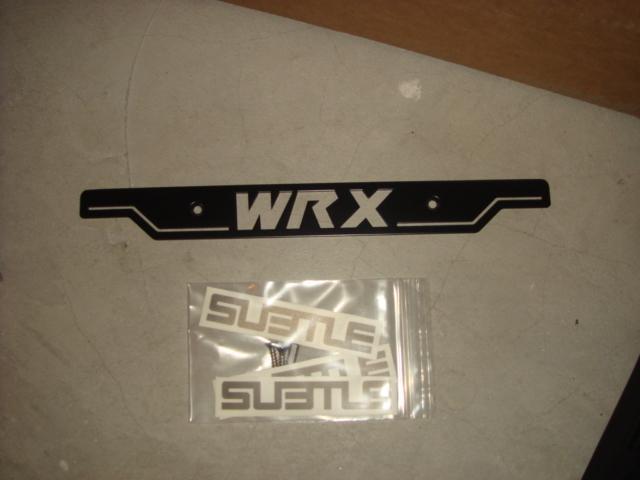 The driver's side floormat fits nicely, that's what counts. 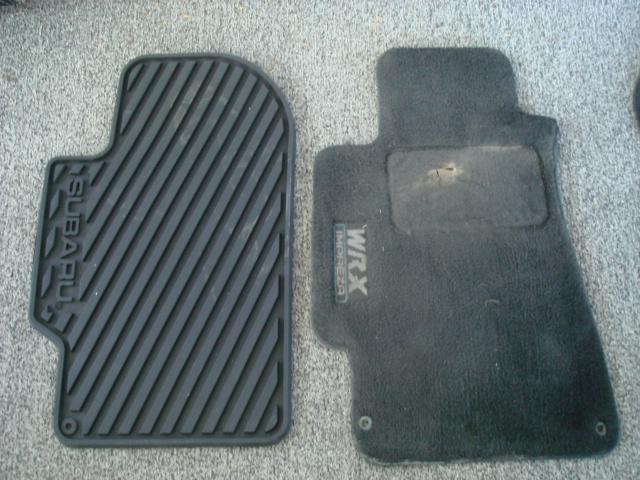 The rear mats are much smaller than the carpets, but since there are no kids to stomp mud or cheerios all over them, they'll do nicely. Nobody puts their feet under the front seats anyway. 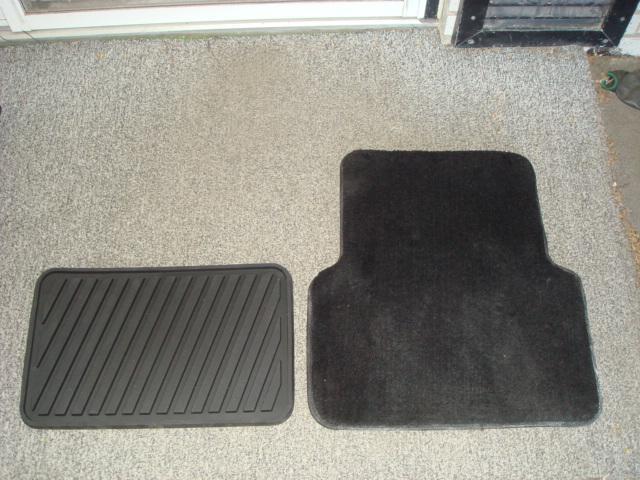 The passenger-side floormat is much smaller than the carpet though, about 3" less coverage above and below, which is unfortunate. Another case of bad planning. 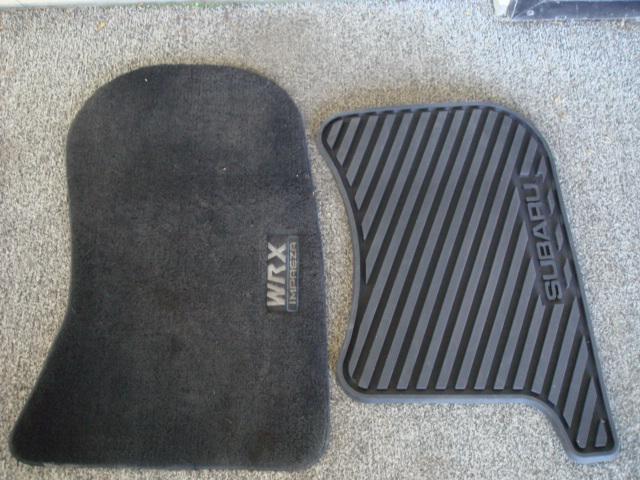