Wife and I at the dealership after finishing up with Clayton!

Home at last: the trusty bugeye and the new STi: 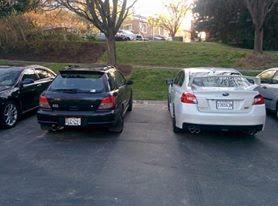 God I will miss that bugeye when she's gone

Unwrapping the owner's manual for the first time. I've never owned a new car before!

Car will remain stock during the duration of the warranty period. If I'm feeling risque, I may install a CBE, short throw shifter, and shifter bushings.

OK, so as many of you know, I've been a little disappointed with the capabilities of the "performance Subarus" over the last several years. While the GD WRX and WRX STi filled a white space in the market that was not yet occupied in the USDM, GR WRXs and STis left a lot to be desired, particularly in the fit-and-finish and cornering department. Compared to the competition, WRXs and STis handled like pickup trucks, and sounded like them too! The realization came in 2010 when my wife and I bought a 2008 MazdaSpeed3. Compared to the WRXs and STis of the time, the MS3 (despite the smaller motor) produced a lot more torque and felt more planted and rigid in the corners. Then, in 2011, I drove my first Lancer Evolution X. Compared to the WRX, the Evo was an instrument capable of slicing through corners with the utmost precision. As you forum veterans know: I swore I would never buy another performance Subaru. Then the impossible happened: Subaru LISTENED to the complaints and built a car to end all cars. So here I am, the proud owner of a 2015 WRX STi, and considering I have driven the competition, it is quite a statement when I say that the 2015 WRX STi is the best car in its segment. Allow me to provide my review.

Pulling out of the parking lot, it was immediately evident the car had been completely overhauled. Gone was the numb and sloppy feeling of the GRs. Yet, despite the lack of sloppiness, the 2015 does not retain the jarring ride of the GD WRX STi. If there is one word I would use to describe the 2015 WRX STi, that word would be "tight." The steering is tight and responsive, the chassis rigid as can be. Literally everything about the car is tighter and more composed than the last generation STi. What is most interesting to me is that Subaru has managed to keep the best of both the GD and GR chassis while eliminating the pitfalls. The 2015 STi rides smoothly but does not have the spongy feeling that plagued the GR STi. In short, the 2015 STi reminds me of a GR STi with all conceivable driveline and suspension bushings upgraded. If I were to compare the 2015 STi with the Evo X, I would say that the cornering is very close. It is difficult to make the judgement because I have not driven either car in anger, but the 2015 is impressive. Compared to the WRX, the STi feels a bit more planted, but honestly it's very close. I drove the 2015 WRX back-to-back with the 2015 STi and the WRX is an impressive performer. The steering in the WRX is very good, especially considering the rack is EPAS, though it doesn't quite topple the STi in precision. In the cornering department, the WRX is incredible. When compared to the GR STi, the new 2015 WRX feels FAR more planted. During the test drive, I was able to drive both cars over an off-camber corner with a rough patch of pavement. The WRX was a little unsettled over the rough patch (but maintained traction) while the STi remained completely composed. It is evident that though the electronic traction control does its job adequately, it just can't beat out the true limited slip differentials in the STi. Both very impressive performers; points to Subaru here.

Nothing to see here; move along. Yes the STi retains the EJ motor. Yes the motor belongs in a tractor. It's still rough, still uncivilized, and vibrates like a cement mixer off-idle. I don't have a lot of nice things to say about the EJ motor, but it does have a very nice powerband and feels linear like a NA motor. I forgot how much more off-boost drivability the EJ257 lends compared to the familiar EJ205. Yet the EJ257 isn't too torquey like the 2.3L in the MS3. I think it's really just the right amount of torque low in the rev range. I can't comment on the tune of the car since I have yet to surpass the break-in period, but the tune feels quite good for regular drivability. Compared to FA20 in the 2015 WRX, the EJ257 is ancient and feels it!! Words cannot describe how truly impressive the FA20 in the WRX feels to drive. For starters, the FA20 does not feel like it belongs in a tractor (EJ257 clearly does). Under 2000 RPM, the EJ257 is easier to drive with a bit more torque. However, as soon as the tachometer needles passes 2000 rpm, the motor lights up. Boost comes on early and the motor is smooth. My god is the motor smooth. However, I cannot speak kindly about the boost control on the FA20. As boost builds, the car shakes and stutters. Remember those dynographs posted comparing the WRX and WRX STi? Remember how wild the torque curve looked on the WRX? It feels 100x as wild to drive. I am confident that this will be resolved with a 3-port and good boost mapping. Then, we will truly see what the FA20 can do!

It's no S4, but the interior in the new STi is very close to the quality of the interior in the Golf R. It is an AMAZING improvement over the last generation, particularly in the STi. The base model WRX, lacking the seats or the center console in the STi, is a bit under-equipped. However, at $25k, it's hard to complain when you recognize what else you get for the money. I cannot comment on the interior of the STi limited or WRX limited since I did not drive either car, but it is nice to have the amenities in the base STi. Heated seats (wifey loves these), LED headlights, dual climate control, and alcantara really bring the cabin together. The faux carbon-fiber trim isn't overstated as I had expected. The center console in the STi is a bit nicer than the WRX and houses the SI drive toggle and DCCD switches. The seats in the STi are a bit more comfy and bolstered than the seats in the WRX. Alcantara and leather bolsters are a great combination: a combination to which I have become accustomed in the MS3. As far as the stereo is concerned, I did not find the audio as horrendous as the recent complaints suggest. While it's no where close to the Bose system in our MS3, it isn't half bad and much improved over the last generation WRX/STi. Compared to the Evo X, the STi blows the doors off its principle competitor in the interior department. No question.