Once upon a time a 14 year old boy fell in love with a car. It wasn't any normal Ferrari or normal super car that every other boy dreamed of, granted it was just as hard to find one this one was much more affordable. He had been learning how to drive to get ready to earn his permit when he was 15 on a 94 corolla he had received from his mother. One day looking at a magazine he noticed something very very strange. There was a Corolla that was all sorts of sideways staring at him with a seductive look topping even what the Victoria Secret angels were capable of. It was here that he fell in love for the first time. He would stop at nothing to own one as soon as feasibly possible. Well, as time went on and highschool came to a close it was time for him to move away to college and start his life with his own restrictions. The sounds of "you're not getting that car" were out of hearing range and the search was on. Then, one day the unthinkable happened; his friend pulled up in a run down 85 corolla that looked and sounded like something from the hills have eyes crossed with a prom night dumpster baby. He offered it to him for the low price of $800 which could be paid off when available, which for this college student was an absolute blessing. And so it began... 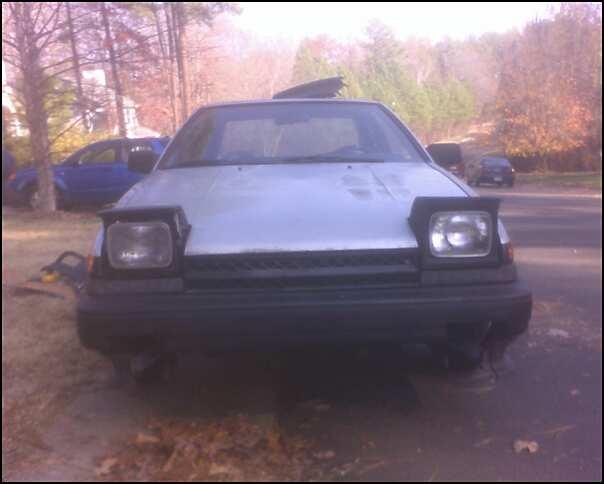 The car sat kind-of funny with a hunched forward look about it thanks to it's 13inch mismatch steelies up front and the 17 inch tuner rims in the back. It was missing half a bumper, some paint, and other little pieces but the looks didn't matter, it was an AE86. The learning began quickly for what this little girl had in store for him. It was an Sr5 and the carb didn't really work quite the way it should, nor did the valves which he would constantly be reminded of while driving. Though this was the first stick shift he had ever attempted to drive on the road it didn't take long to learn the ways she liked to be touched, and mind those moves had to be learned quickly. Since the carb wasn't as healthy as it should have been the gas, brakes, and clutch had to be held at once to come to a stop to keep it from choking. Learning how to drive a stick shift while learning how to heel-toe makes the whole process a little easier looking back. Then, one day the fate he knew she would encounter made it's move and the head started fighting itself like an old school back alley beatdown. With the carb on fire and the motor in no form to move, the car had to be pushed home with a few tears wiping away the gas and oil from his face. But like a phoenix, he was determined to rebuild it from the ashes. This time however, this baby would be better, lighter, faster,... stronger.

Not listening to his peer's he went ahead an made a move he would half regret for a while (since it meant much more work and that much longer of a time that it would be off the road.) After a quick drive to Virginia a 20v Silvertop made it the basement and the buying spree began.

(and it was suprisingly clean inside, not to mention it came with that Tom's carbon fiber plug cover)

But, before the motor could go in it was time to make some major adjustments to the body. If she was going to drive like a high-class lady she was going to look the part. Though she was off the streets she couldn't get away from her main job at the time... stripping.

(sorry these pics are terrible, they were taken on a crappy cell phone circa 2008) 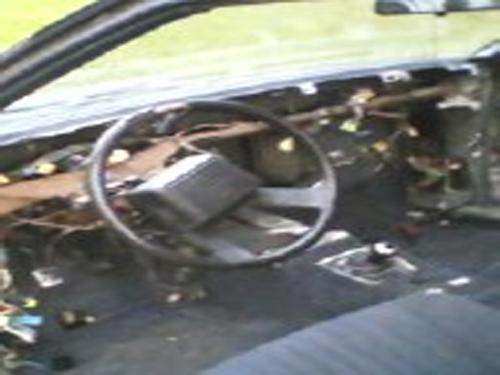 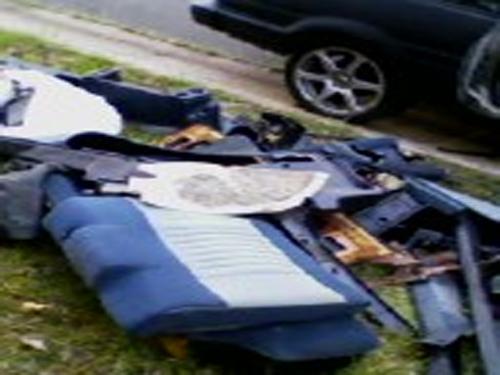 After some jealous neighbor's got tired of her teasing antics I awoke one day to a new sticker on her; move the car or the city would move it for me. Not risking that fate it was time for her to join me in college. Granted, she would sit in the back of a frat house but it wouldn't be the first time a girl stripped down to nothing back there. In her new home it was time to continue as planned. 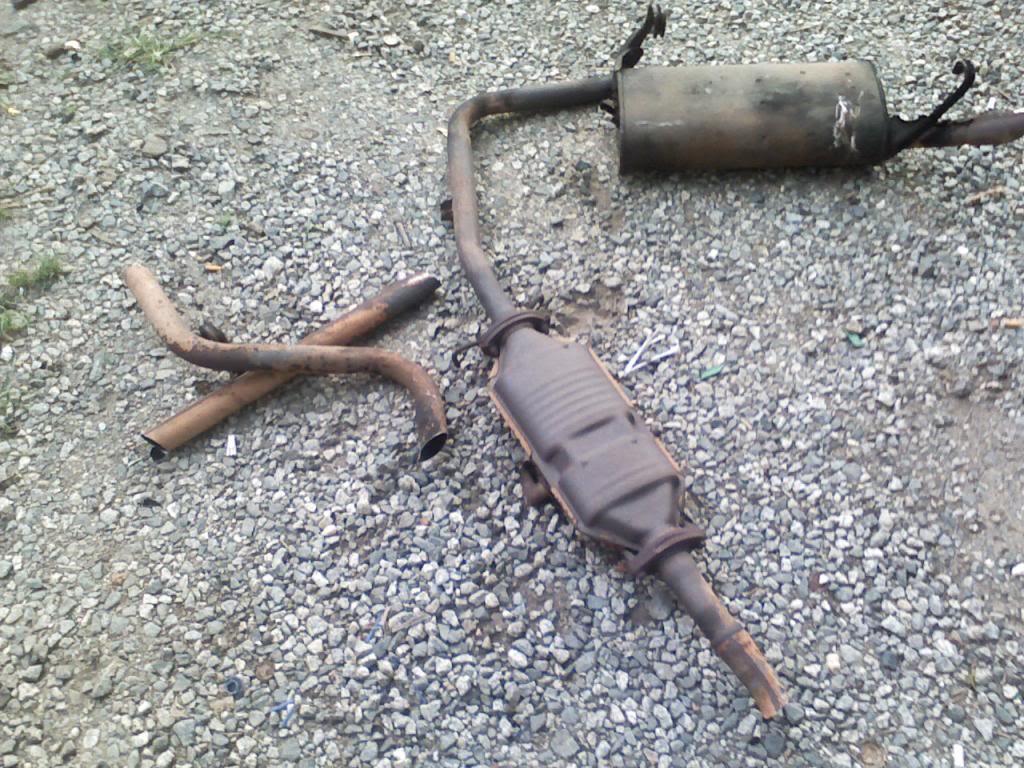 after some de-greasing and entirely too much anticipation, the shell got a prime coat and the engine bay got a glimpse of what would come (though the job was not done very well at all and there may have been some beverages consumed by the helping hands) 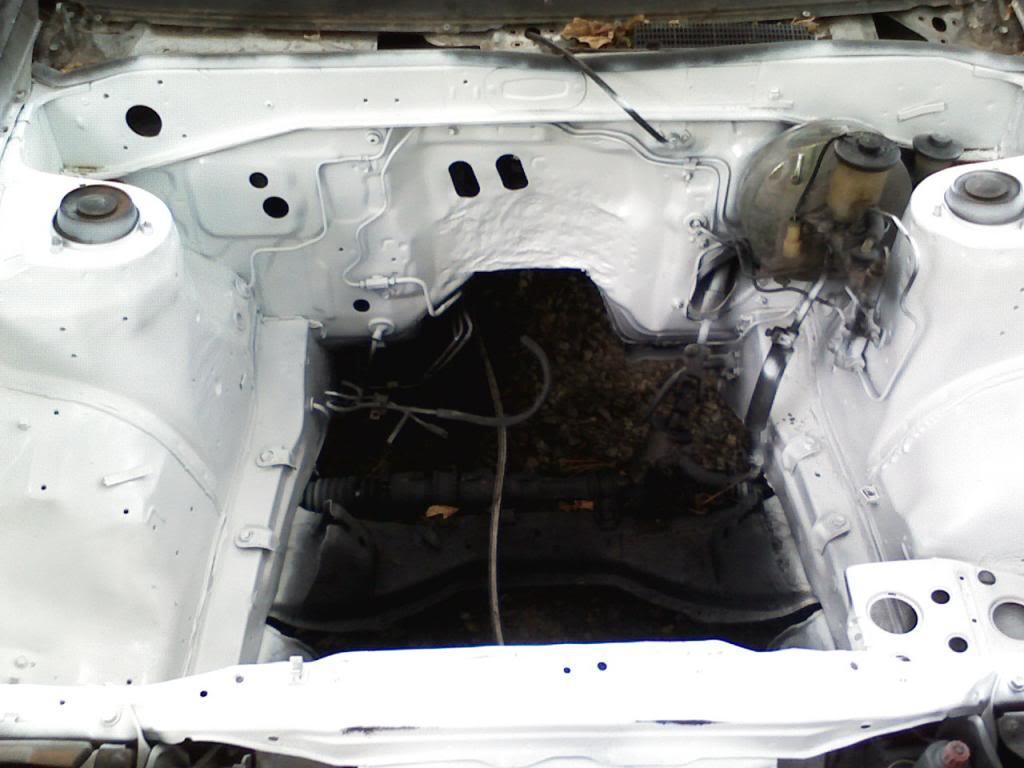 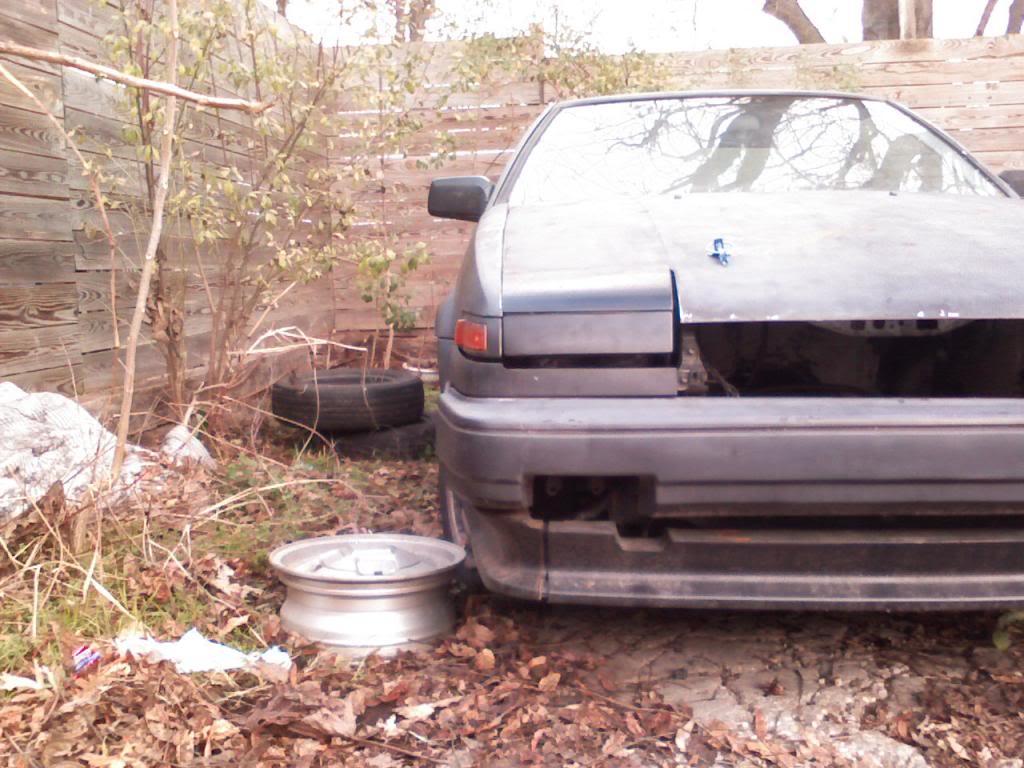 While at the frat house some purchases were made and a decent pile of parts started mounting up. Everything from a new fuel tank, lines, pump, filter, etc to handle the EFI system for the 20v to random fun parts on the outside like a gts front end, new headlights, suspension stuffs, and things of that nature. Sadly though, she didn't handle the frat life too well and it was time to head to a new home back near the parents house. This time though to keep jealous people from placing stickers all over her she would be locked up in a storage shed.

She likes her new home, but is tired and confused from her travels

time to get to work, she won't build herself 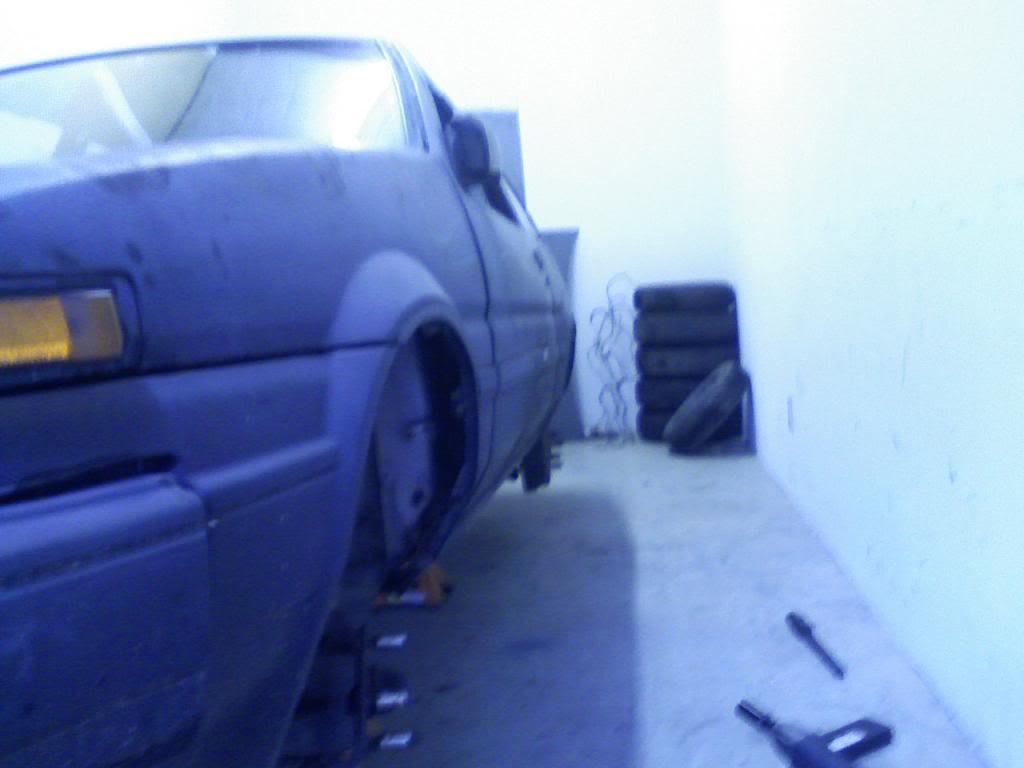 Well, classes started building up and time started running low so it was time to start working on her out beauty. The silver was nice and all but it was time to take her back to her roots; enter Panda. Since she will be around quite a few crazy drivers and my pockets are not that deep we went for the patient rattle can option. If you take your time it actually doesn't look too bad (considering.) 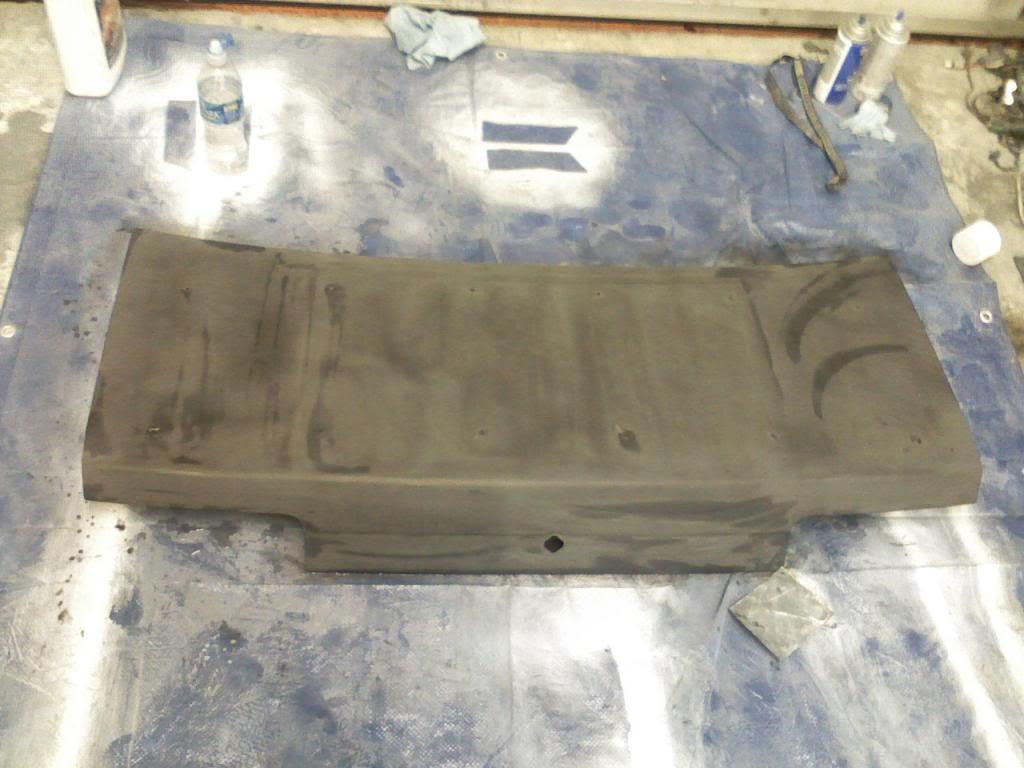 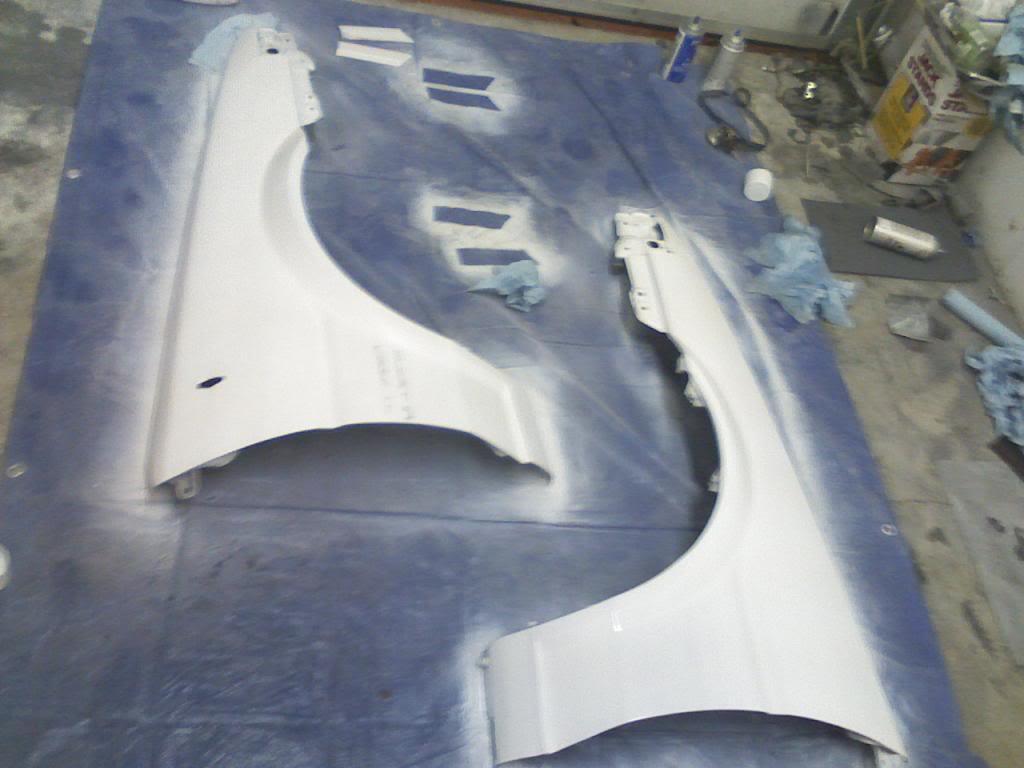 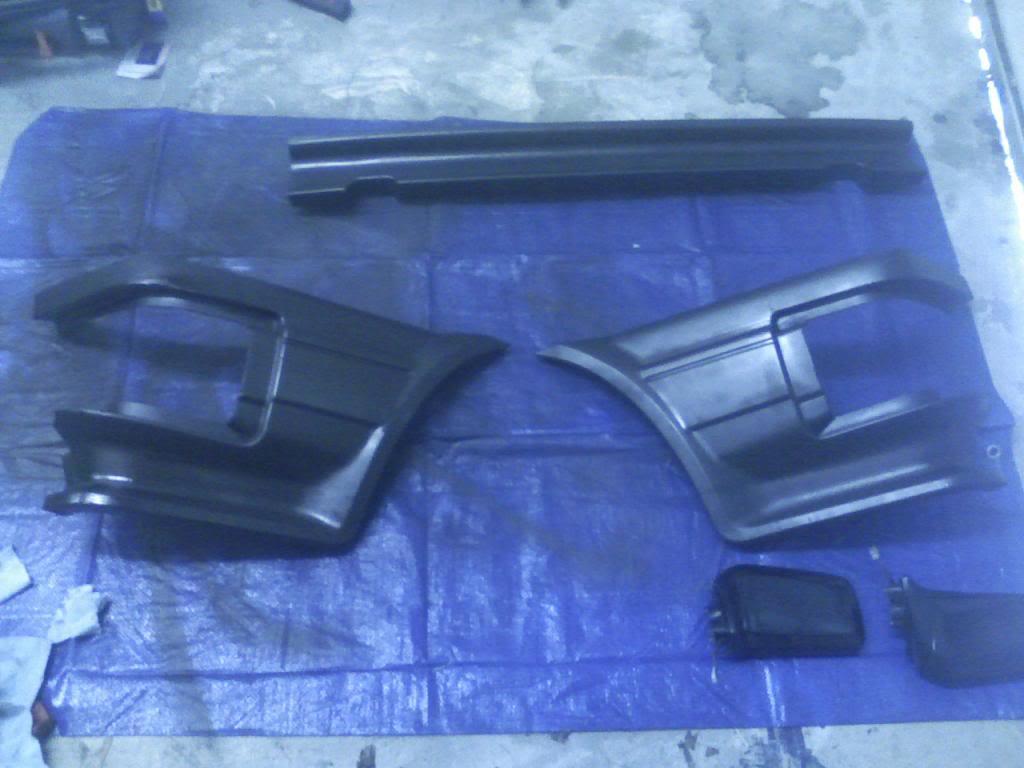 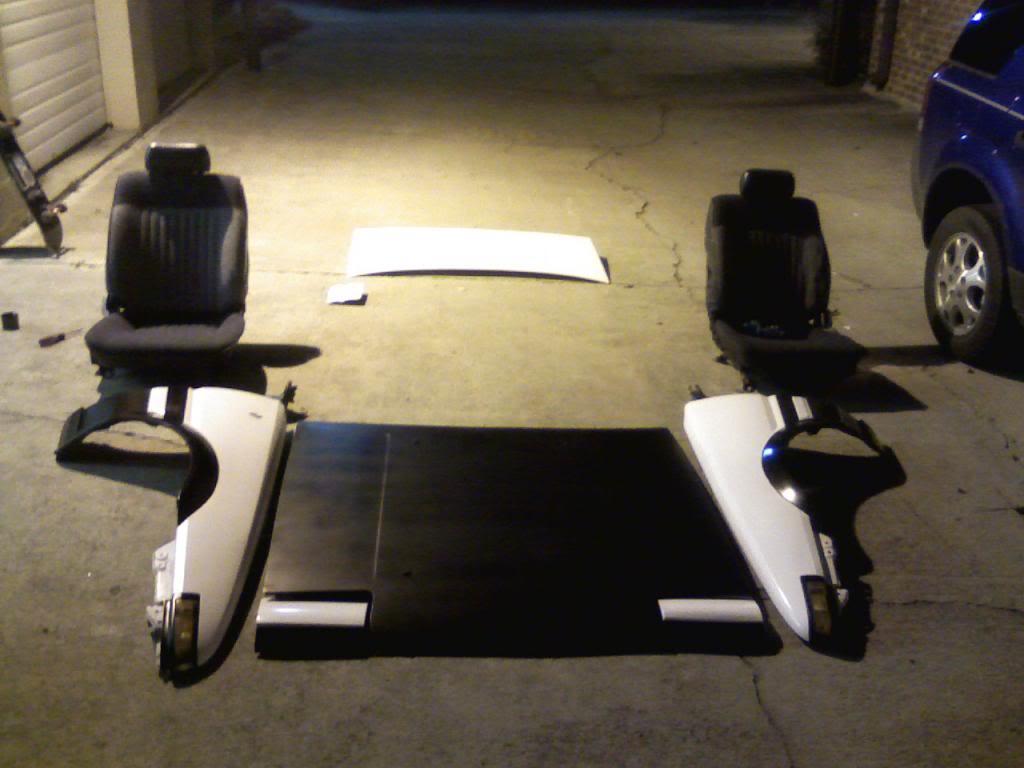 The inside was to be kept to a minimum as far as looks, going on the idea of the simpler the better (and lighter.) Opting for the dark secrets of her past she donned a new black stripped interior.

as much as it hurt to do it, she needed some rough love to get the motor to fit and the bay needed to match the cabin 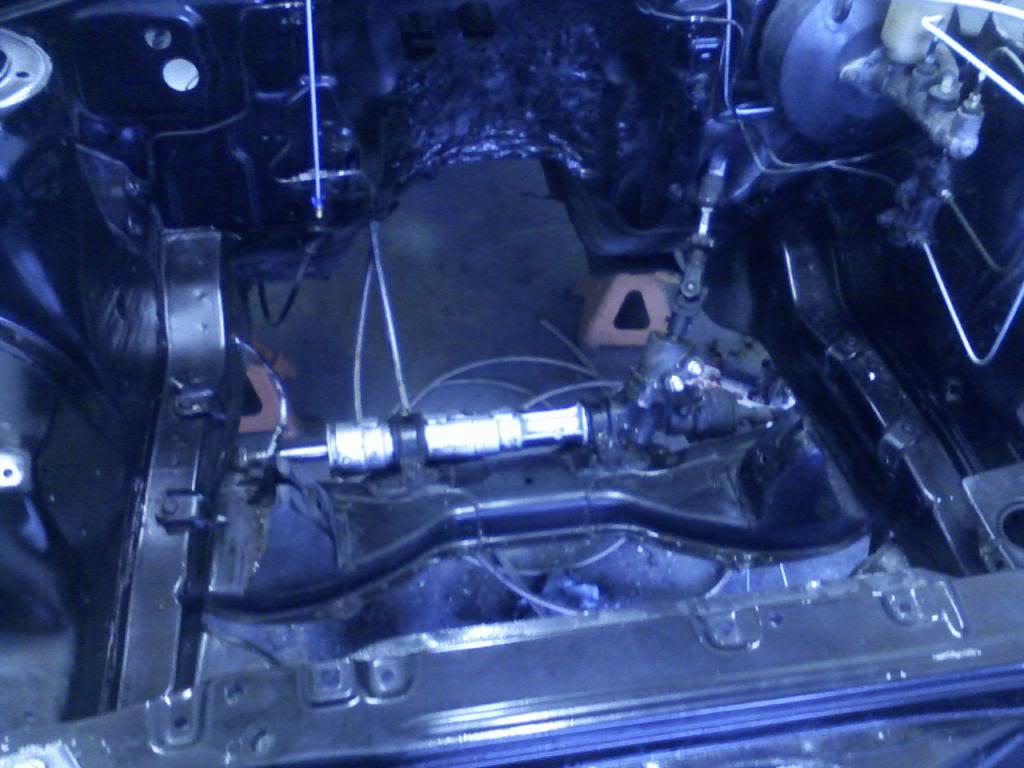 Since the body was stripped all the way down the wires were removed and it was time to start working on the new wiring system. With this, the dash needed a makeover and the center console was to become the headquarters for battle command. 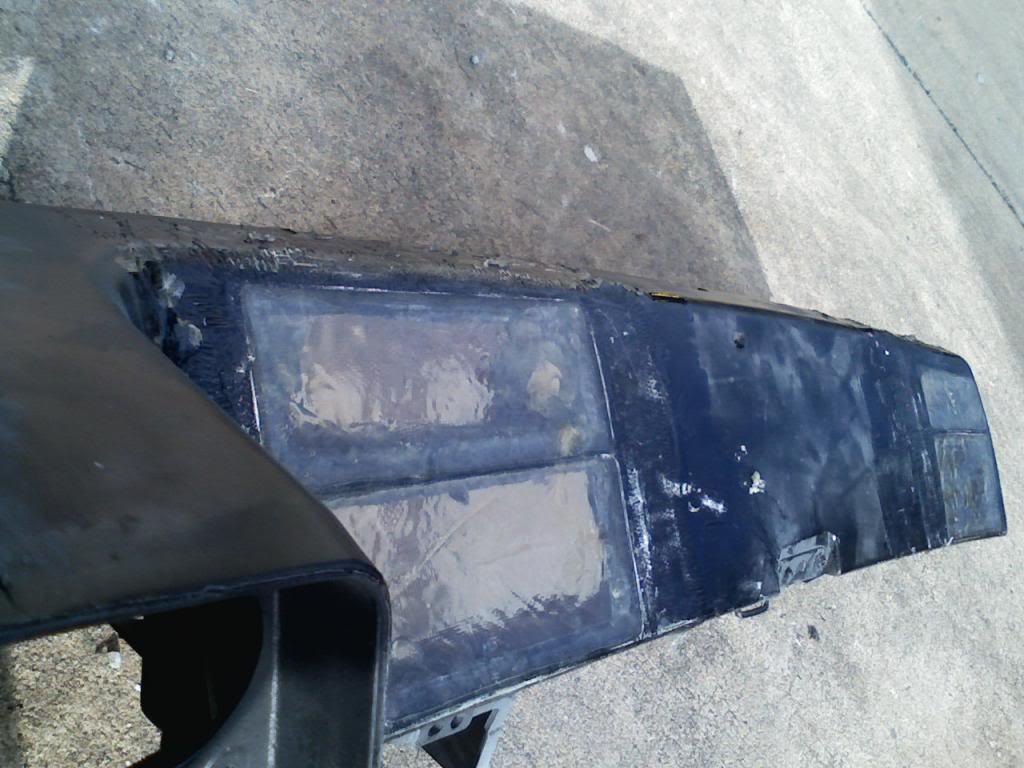 mock of the board. This will be moved to a different location after current plans are finished (it will also look a lot cleaner and have wires that actually have some color)

After looking at the brakes it seemed that it was about time for a little upgrade, as well as adding some nice springs while she waits for coilovers (one day..... one day) 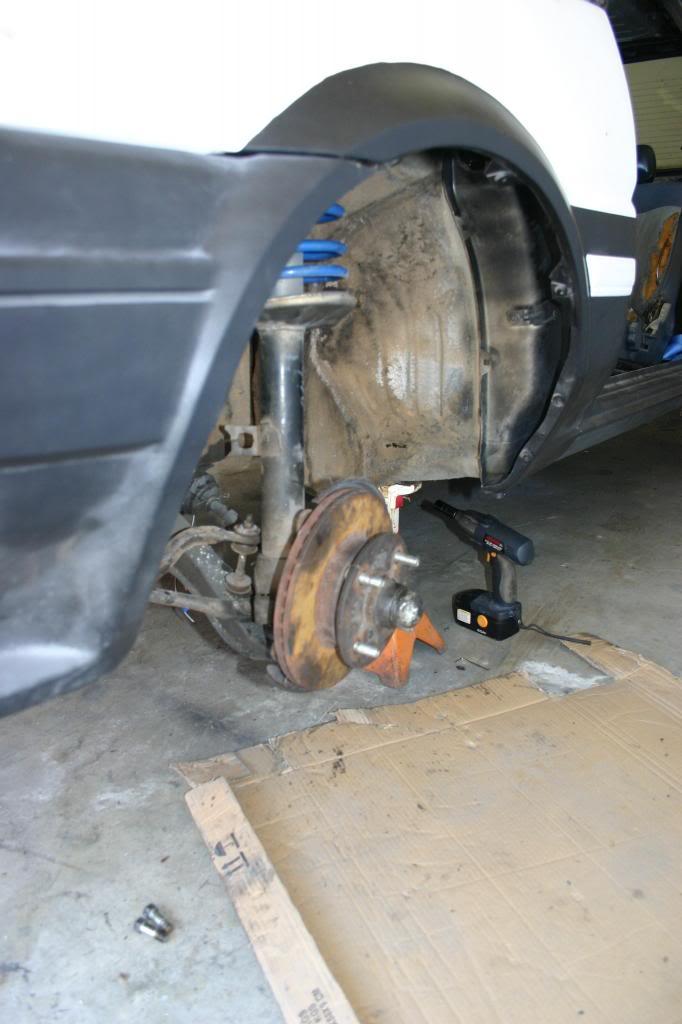 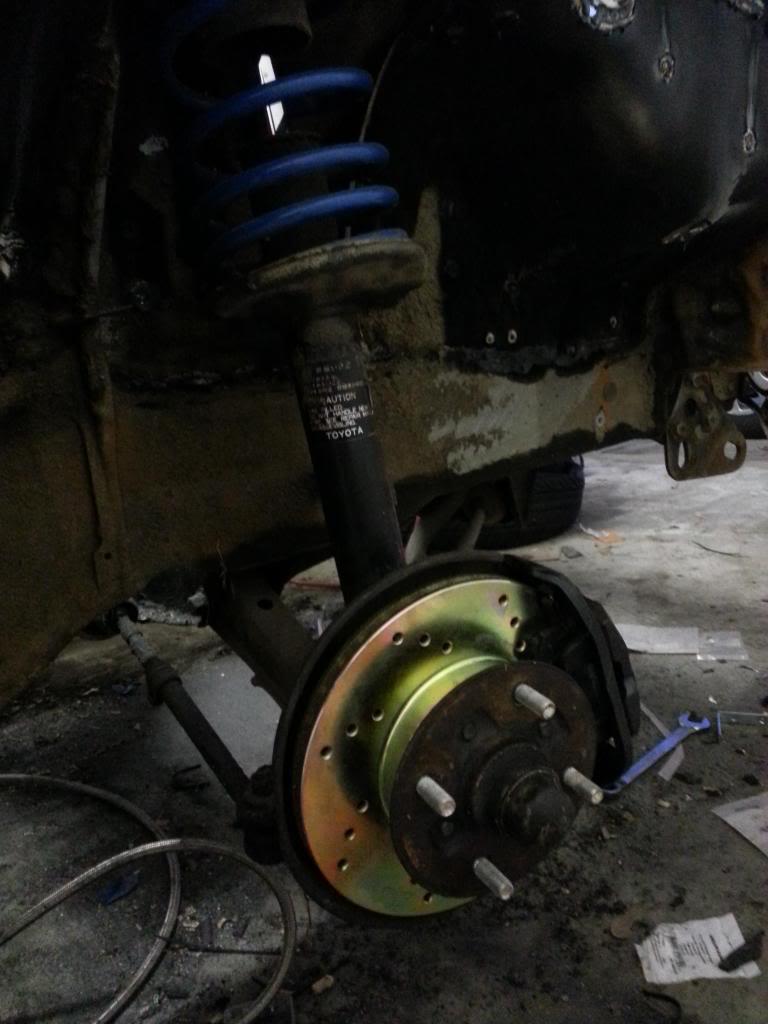 While her body was busy getting a makeover the heart was earning a few new additions as well. Just to name a few the motor received a set of PASS underdrive pulleys, a new starter, alternator, new timing belt, NGK Iridium Plugs, Nology Hotwires, MSD 6A Ignition, MSD Coil, a Fidanza lightweight flywheel, ACT 6 puck unsprung clutch kit, Cusco Motor and Tranny mounts, removed the power steering and a/c condenser, and a nice aluminum half radiator to keep it cool, and PaceSh****r headers (for now) to go to a test pipe and Buddy Club Spec II exhaust. 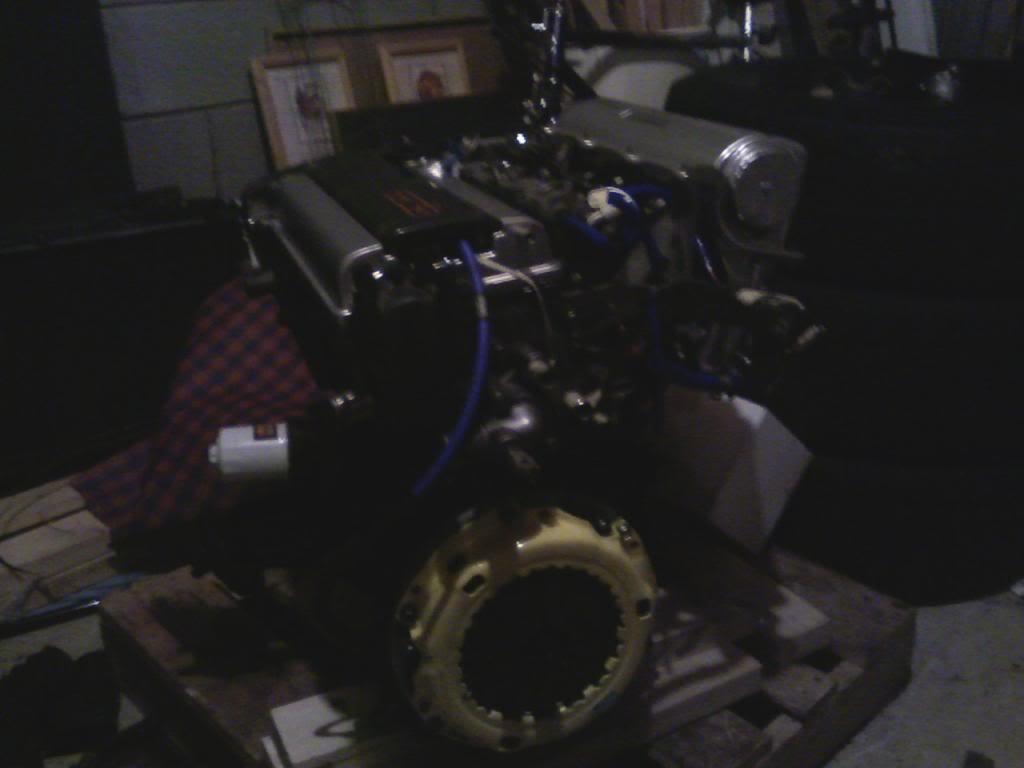 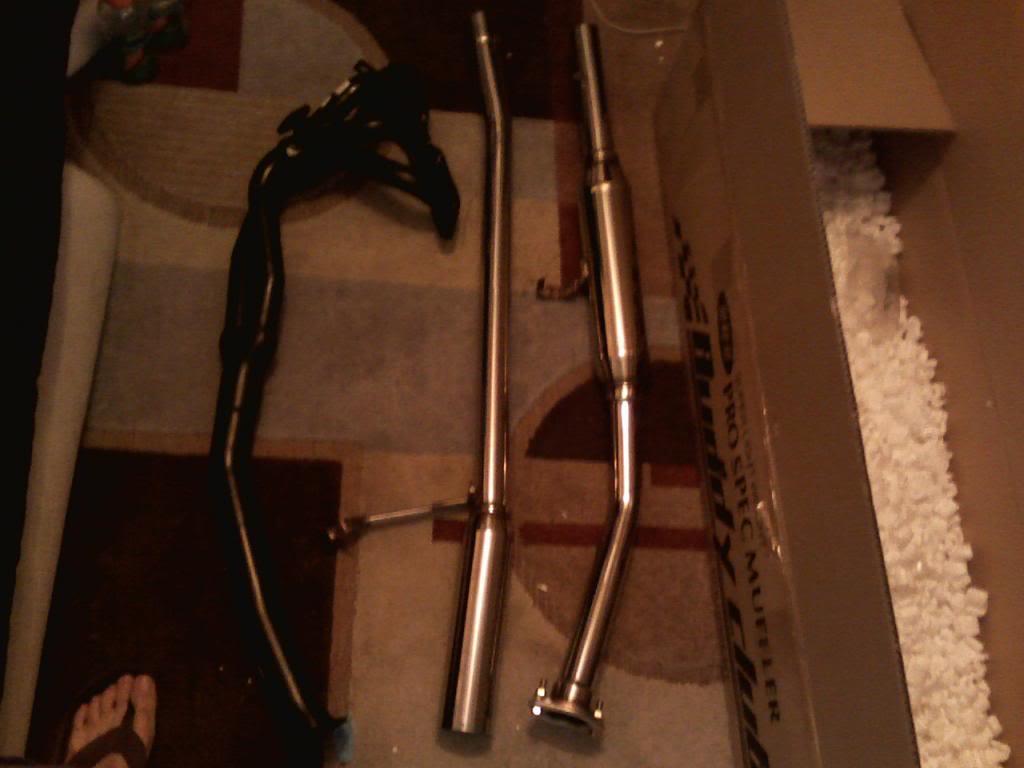 When the body was about ready for a test fit we brought the motor over to the car to see if the transplant would take. She rolled herself out into the sun for the first time in about a year and a half as her servants made some room behind her. 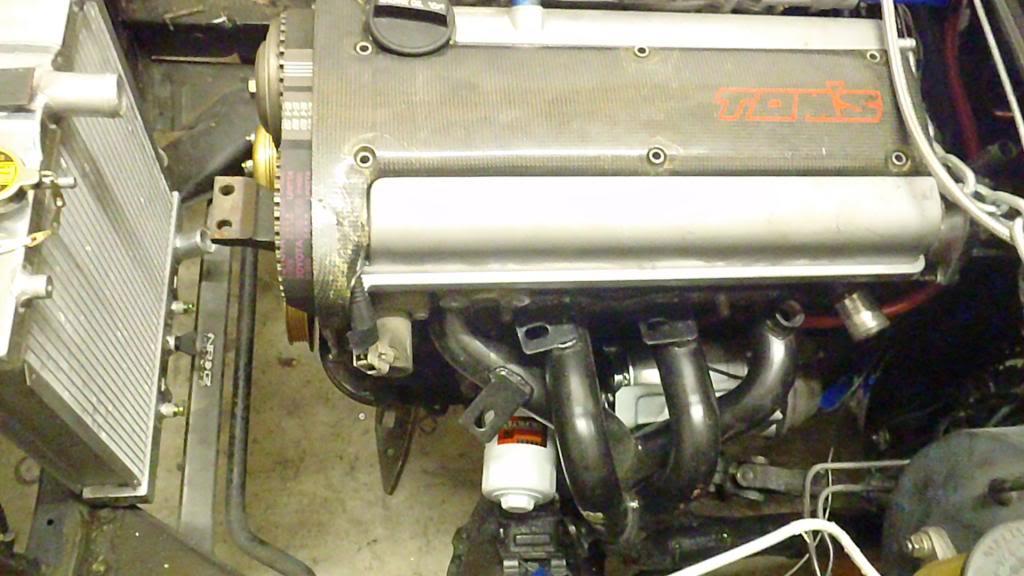 More tragedy struck however. When the motor was being lowered in it didn't take long for everyone within a mile radius to hear a loud *crunch* followed by a quick facepalm. The distributor cap was crushed. Though she looked somewhat happy, it wasn't meant to be and the motor had to be pulled. This is the last picture she took with the motor still in place. This allowed for some more testing of other parts so she didn't have to continue getting teased.

She sat in that position for a long time as life had it's way with some craziness. When we finally got back to working on it though I acquired my favorite toy to date, a Lincoln Electric Welder. It was purchased with the purpose of cutting a box into the firewall to house the distributor cap. After some further thinking we decided to make a larger hole so that the motor's coolant lines could wrap around the back side and to the colder side of the motor without having to buy an expensive reroute kit. Since the box will sit behind control panel it will be a perfect spot to mount the final relay board. Since the welder was being put to use, and the motor was back out we also decided to start working on the "stronger" aspect. Mostly because there have been a large number of pictures of clean engine bays floating around and, as stated earlier, she's going to be a high class lady. The bay got stripped of the seam filler and the holes were sanded down. The filling process began and the firewall box started to take shape. It looks rough, but the good thing about metal is that you can bend it, weld it, shave it, and then when you fill it nobody will ever know

Firewall Hole with the template. The square is where the box will be. 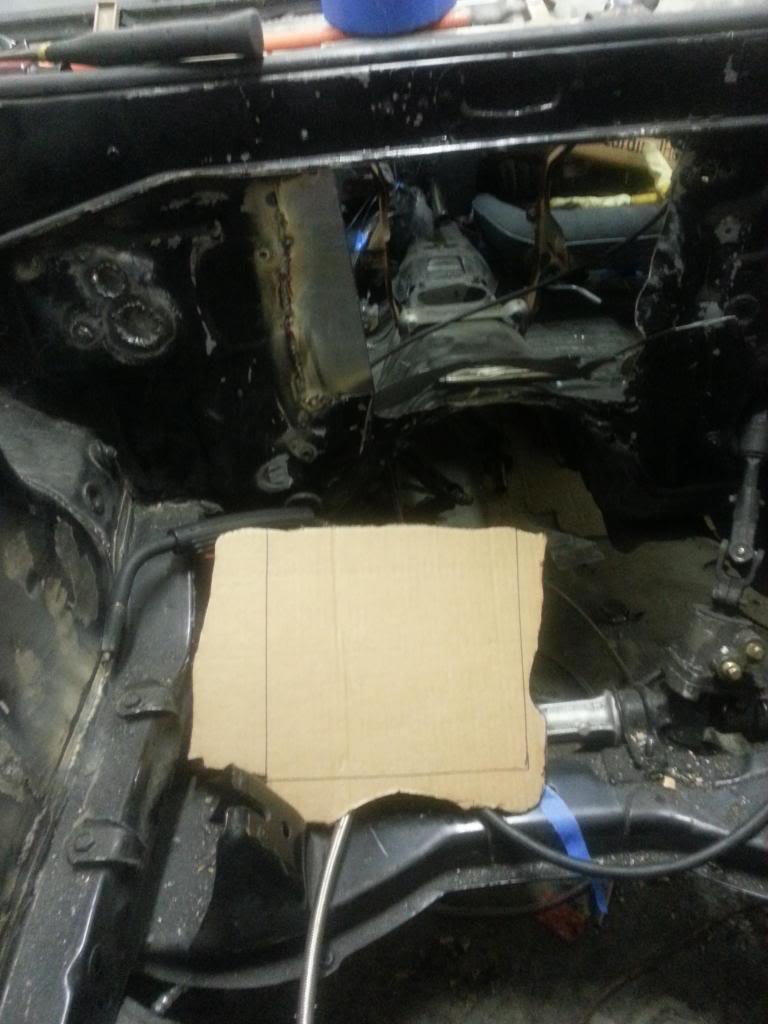 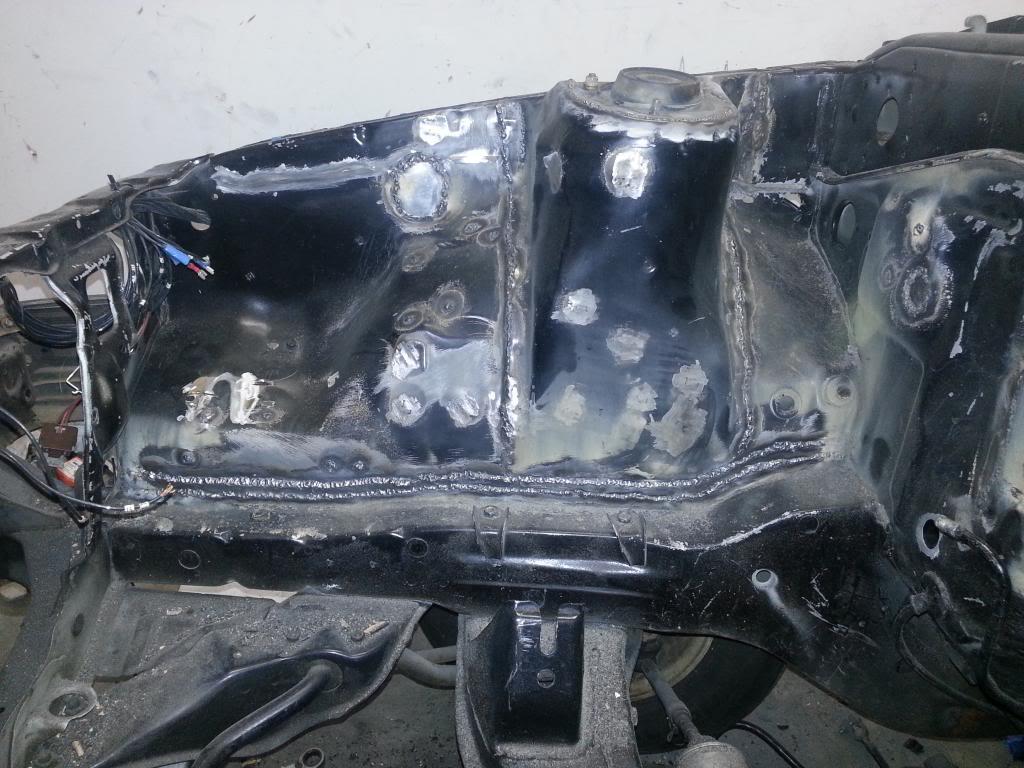 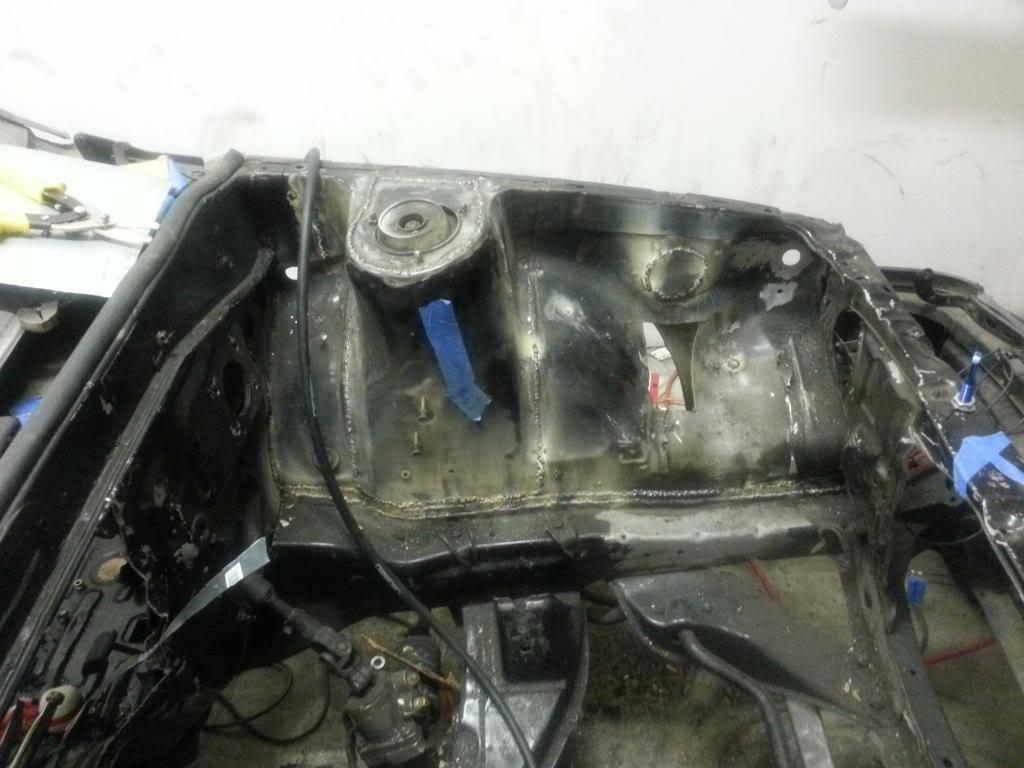 Started cleaning one of the seams to see how it would look.. it still looks rough in the picture but man is it smooth and that was only with a grinding wheel 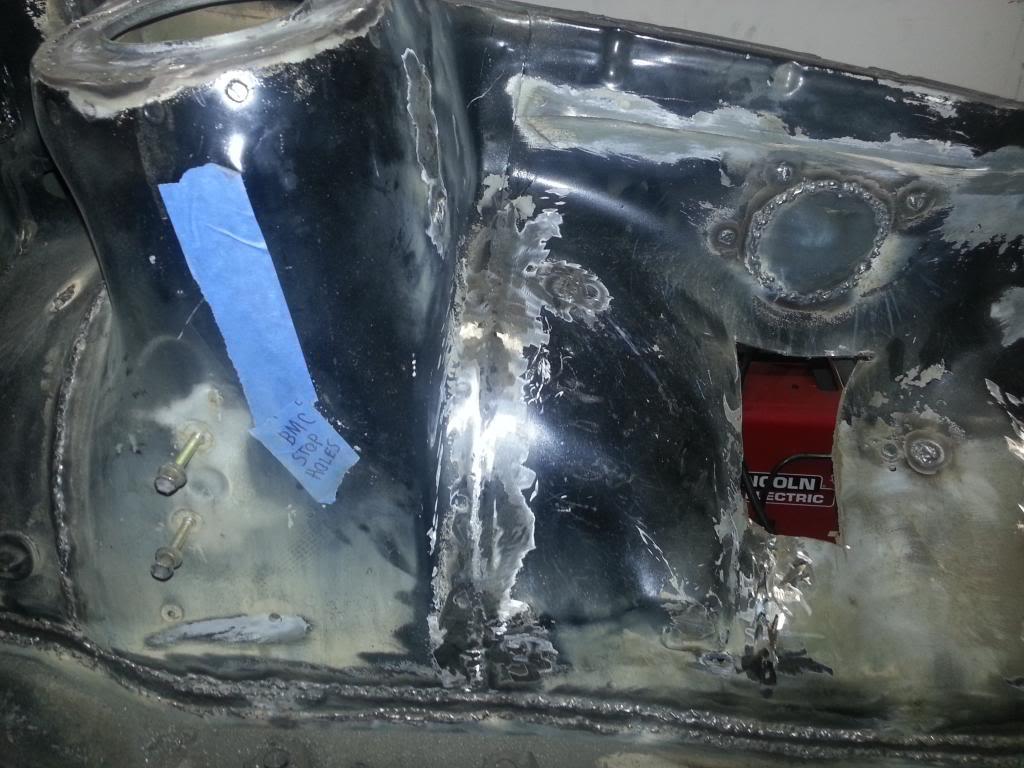 So this is where she sits currently. I picked her up in the winter of '07 and thanks to the distance between my apt at school and my parents house, combined with the lack of money my wallet is able to attain, I haven't gotten anywhere near as much done in the time frame as I would have liked. However, thanks to being accepted into a new school and a little more freedom to get home I've been able to put a ton more work into as of late. This will be updated when I get the chance to get back over to her, but I'm also taking my time and doing things right at this point. As you may have noticed there was some back tracking that had to be done and a little research would have gone a long way (especially when i picked to put an EFI motor into a carb'd chasis.) The desire for shiny objects and nice little add-ons to the the suspension took some money away from the motor extending the time it took to get her put together. Updates to come, and glad to be back on the boards. I do miss my old name (Piso86) though