School me on stance (now a build thread)

Here is my working plan:

1. Buy an air cooled - I'm hoping to find a solid shell that I can just go ahead and start working on without having to do a body-off restoration or anything. The more I read the more I think the black car listed above is the perfect candidate. That early sixty's vintage has the nice classic look without the high price of the '50s cars. Parts are widely available for a reasonable price and easy to come by.

2. Keep the other Corrado shell for a while and see how I feel. That way I can always go back to that. However, if I get swept up in aircooled culture and want nothing to do with Corrados, I can sell it off along with my seats and wheels.

Long story and pics to follow. Things didn't go as plan, but I couldn't be happier. 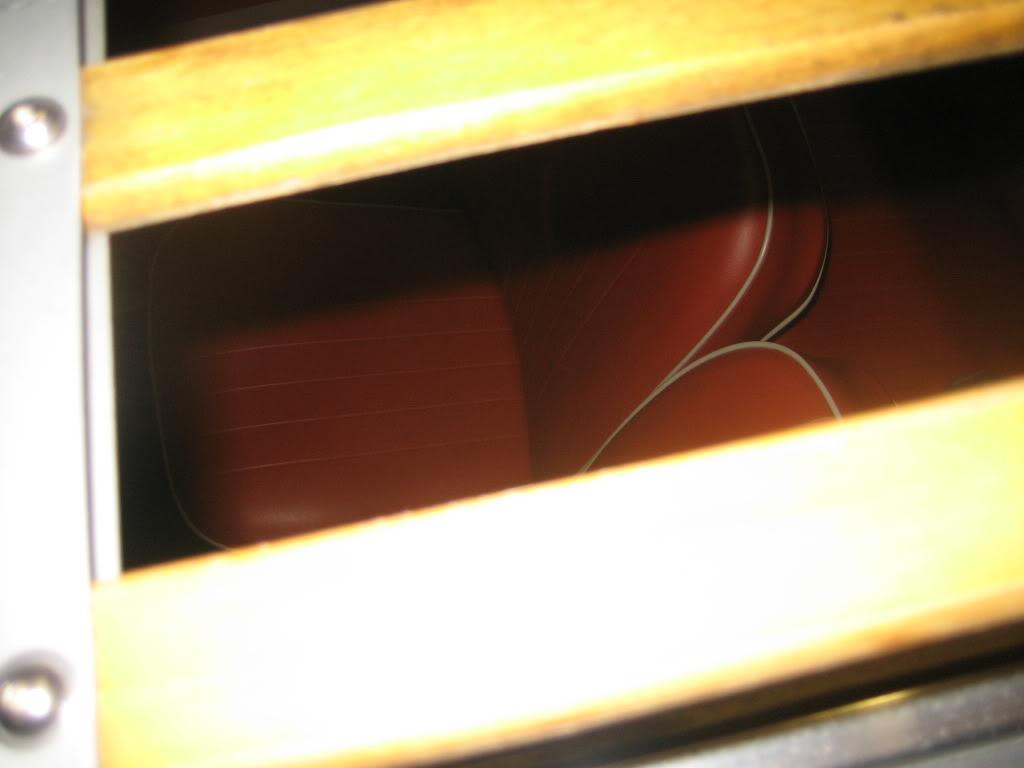 Ok, here is the saga with pics. Sorry for the delay I was too busy joy riding to type.

Sorry for the lack of complete photo documentation. You'll have to use your imagination for a good portion of this.

Drew and I left my house yesterday about 8:00am, picked up the bosses' huge conversion van, and headed to Steve's where he greeted us in his PJ's to load up the trailer. Nothin' but class buddy :D: 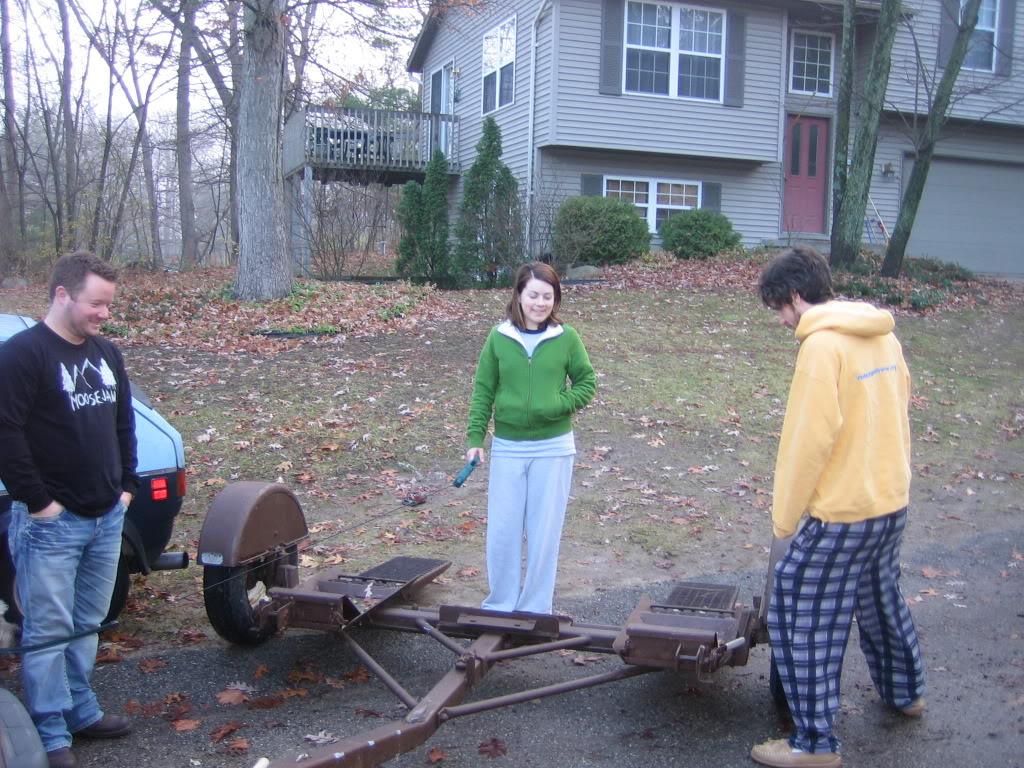 Then it was off to Walled lake to check out the black bug. Three hours later were were looking over what I had built up in my mind to be the next project.

Believe me when I say I had every intention of buying the car. I had already planned most of what I wanted to do to it, picked out the parts I would need and lost sleep thinking about the best way to approach the project. Well, without bad mouthing the car or seller too bad, let's just say it was not the pristine starting point I had imagined. The car had some questionable work done to it in the past and the body was not nearly as nice as the pictures seemed to indicate. On top of that the engine would have needed some serious work or possibly replacement to get it road worthy. It could have been a good starting point for a project, but the owner was not willing to move on the price at all and I couldn't justify spending that kind of money on a car that would clearly need more then I could afford.

So with an empty heart and trailer we started on our way back to Grand Rapids. About half way to Lansing we started thinking. We have a trailer, a truck and a big wad of cash. Let's make the most of it. I made a quick call to the owner of the white '63 and he agreed to knock $700 off his asking price right then and there. We knew it would be a long day but figured what the hell. It could be a fun trip.

Now for some reason I had convinced myself that this car was IN Fort Wayne or very close to it. We were supposed to call the owner when we got close so a few miles into Indiana I gave him a ring. He claimed his exit was just south of Ft Wayne and then 25 minutes west. I'm guessing your sense of distance gets thrown off when you live in the middle of nowhere or something because it took a lot longer then he thought to get there. About two hours past Ft Wayne we were finally at our destination of Kokomo Indiana. The drive wasn't all bad though. How often do you see a senior citizen riding his tractor to the gas station to get a cup of coffee? Only in Indiana. 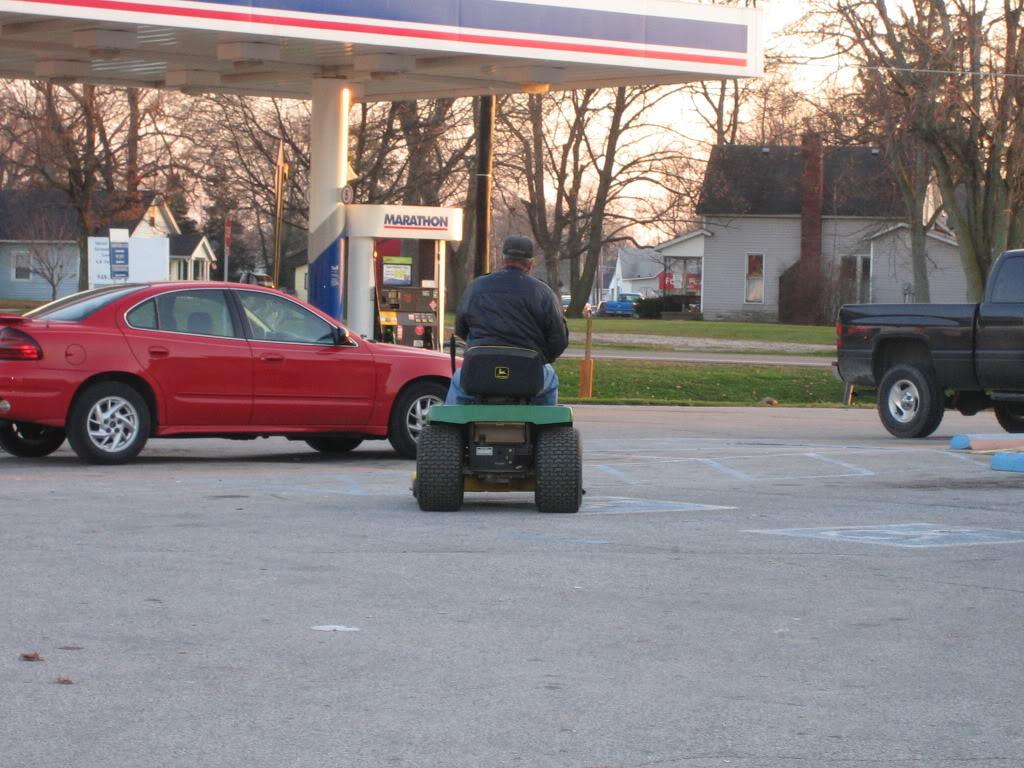 Ok, so when we finally get to the guy's house it's dark but he assures us that his garage is well lit enough to view the car. I believe his quote was something like, "Ya can see a shit stain on a mouse in there". In southern drawl of course. I guess we were almost in the south.

I have to say, as soon as he opened the garage door and I saw this car sitting just right I knew we wouldn't be leaving without it. A quick inspection showed the car to be very solid. The underside had almost zero rust and the body showed only a few dents and scratches. Unlike the black car, this one had good fitting panels and doors that shut properly. The paint was not great and there were plenty of imperfections, but overall it seemed to be very solid. On top of that the interior was nearly perfect and it had a bitchen' rag top. The best part was this one actually ran and drove. We took it around the block and my shit-eating-grin must have been huge.

I know some of you may think buying someone elses' project isn't the best way to go, but you have to look at the facts. I paid only $800 more for this car then I would have for the black car. For that money I got a running driving car in solid condition with a bunch of cool parts. Even if I don't like all the modifications I can at least sell those parts and be ahead for the ones I want to buy. The black car was basically a questionable shell with some (not nearly all) the parts required to put it back together. The choice seemed obvious and I don't regret it at all.

So we did the deal, raised the rear end up a bit and loaded her on the trailer. Then I remembered to take some pictures.

Here is the rig: 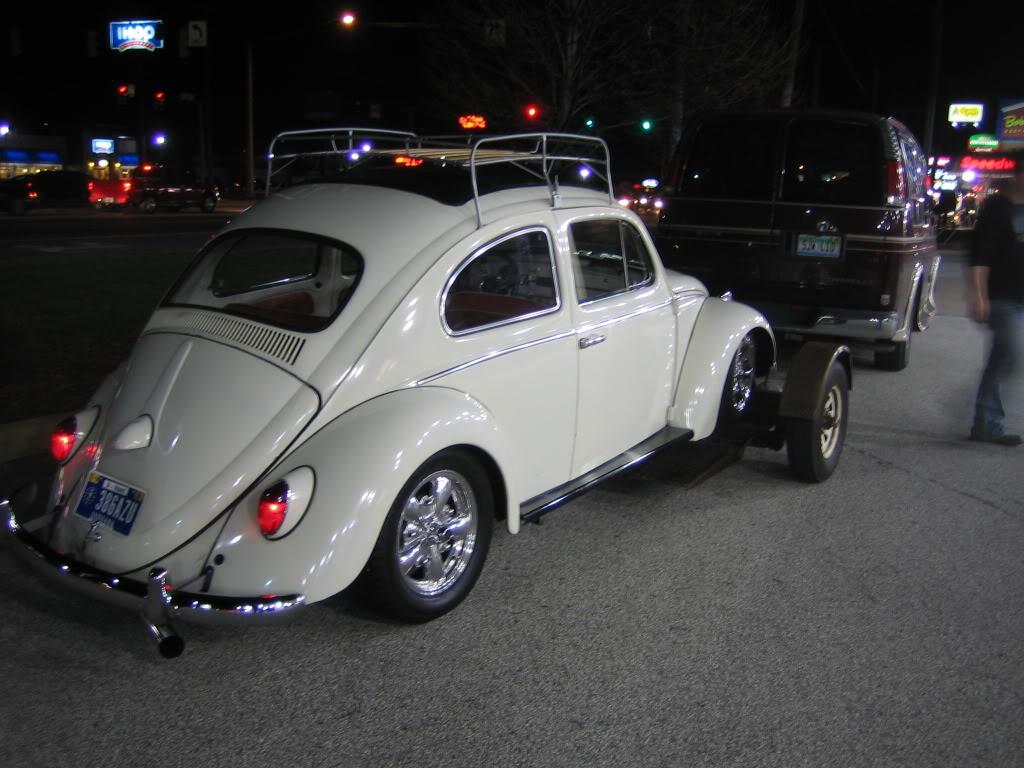 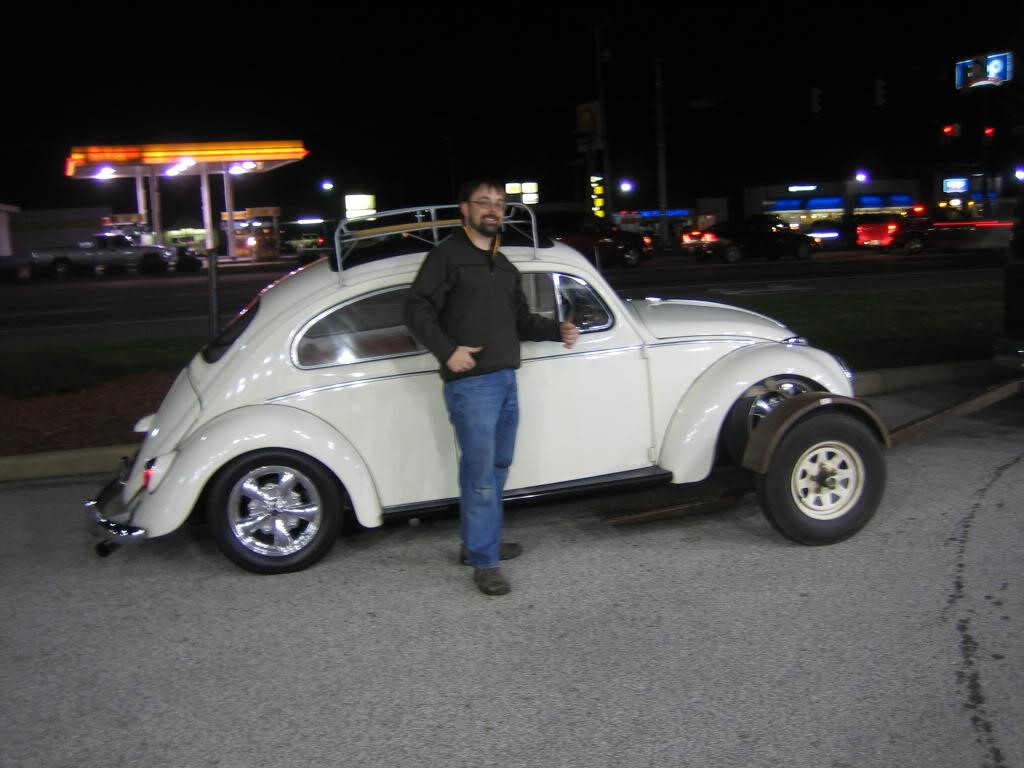 Drew even decided to fix up Steve's trailer for him a little bit. We could probably have used some lights or at least reflectors but these just seemed to fit just right. 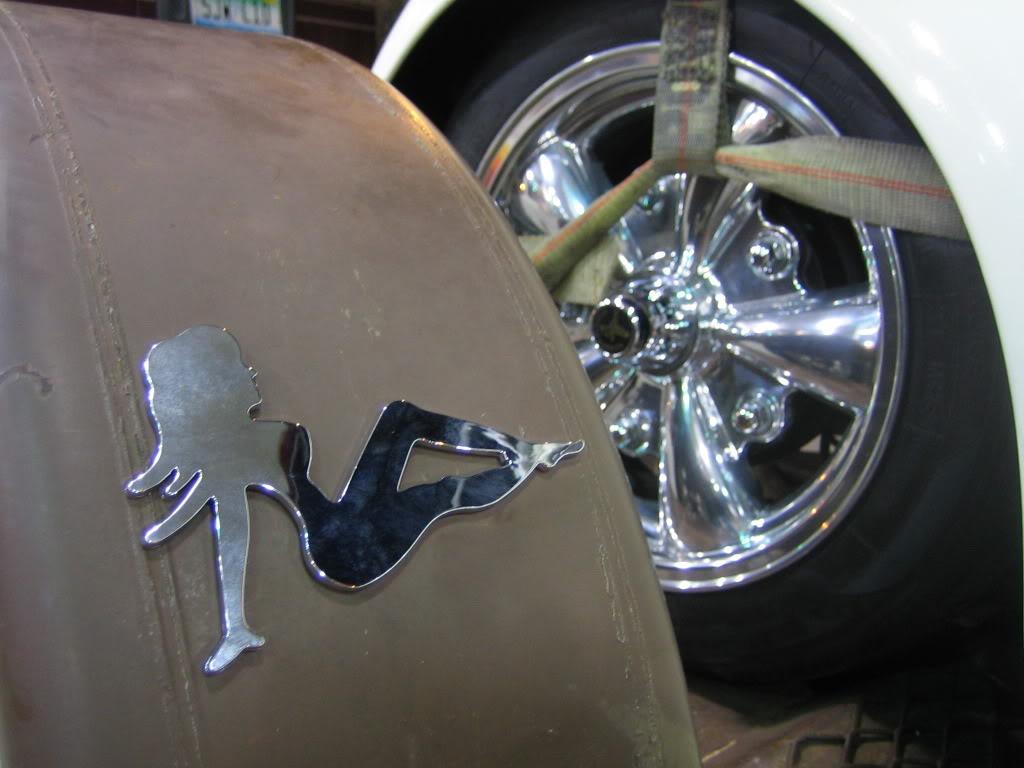 Fueled by energy drinks, coffee and hostes cakes we soldiered into the night and back to GR. The drive back went smooth as can be.

When we got home Janee, Joe and Stehpanie came over to celebrate the new whip. 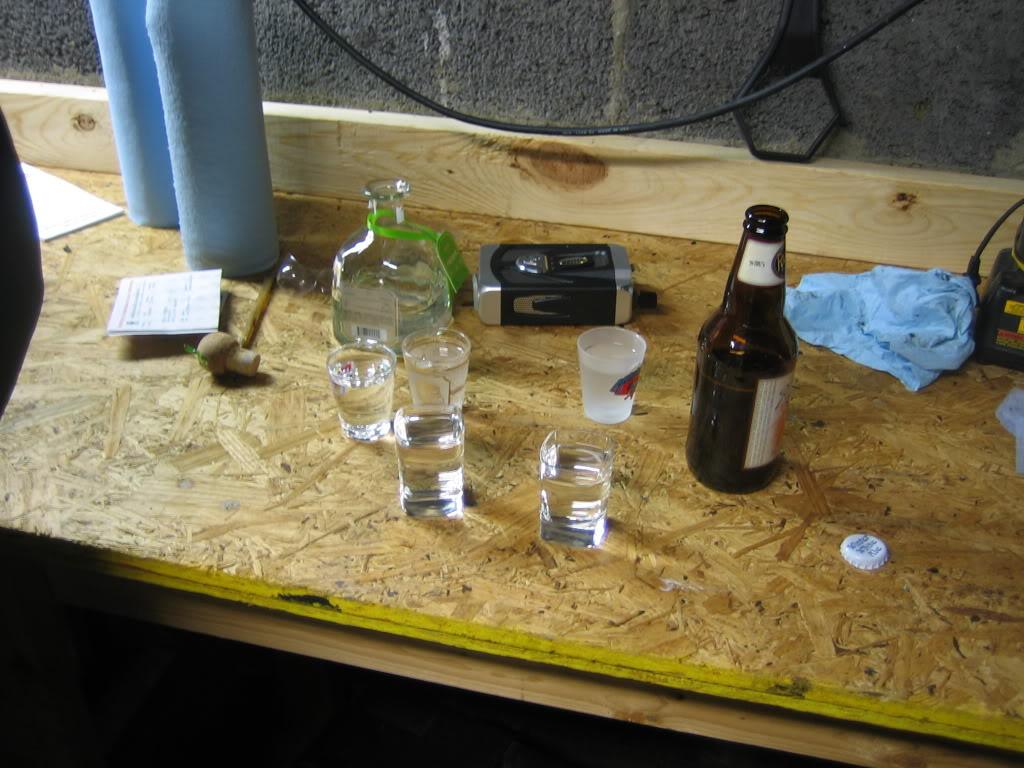 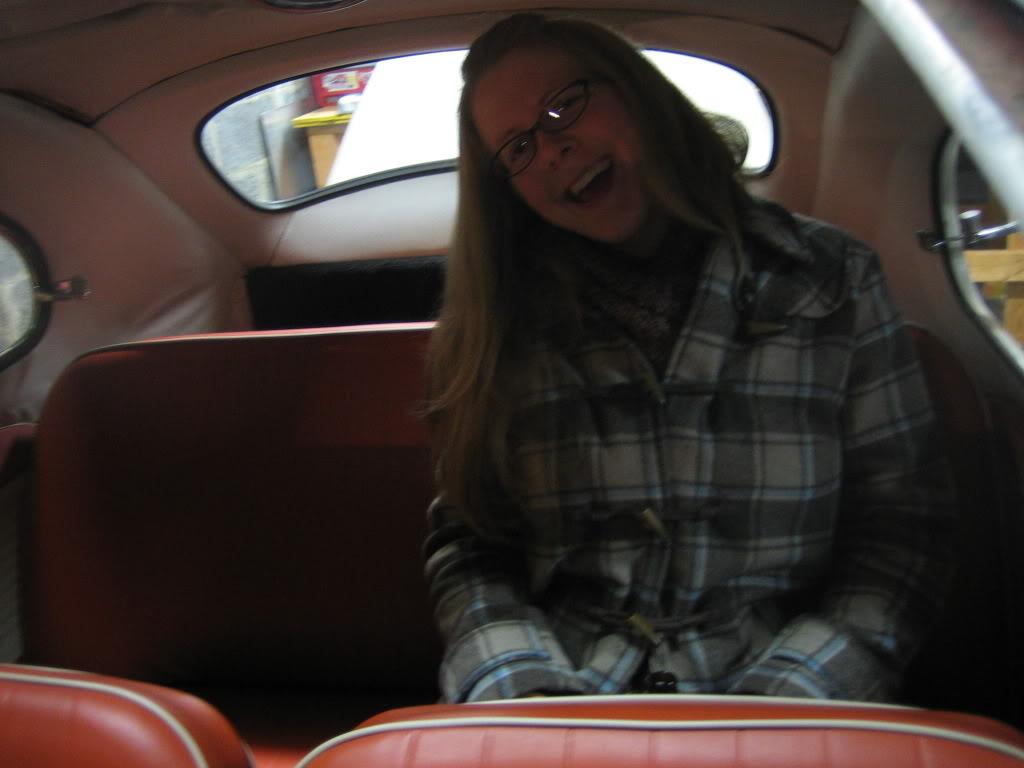 For some reason we decided that Christening the car would be a good idea. Not being a big fan breaking a bottle over my freshly purchased car we just poored a little over the fender. That should work. 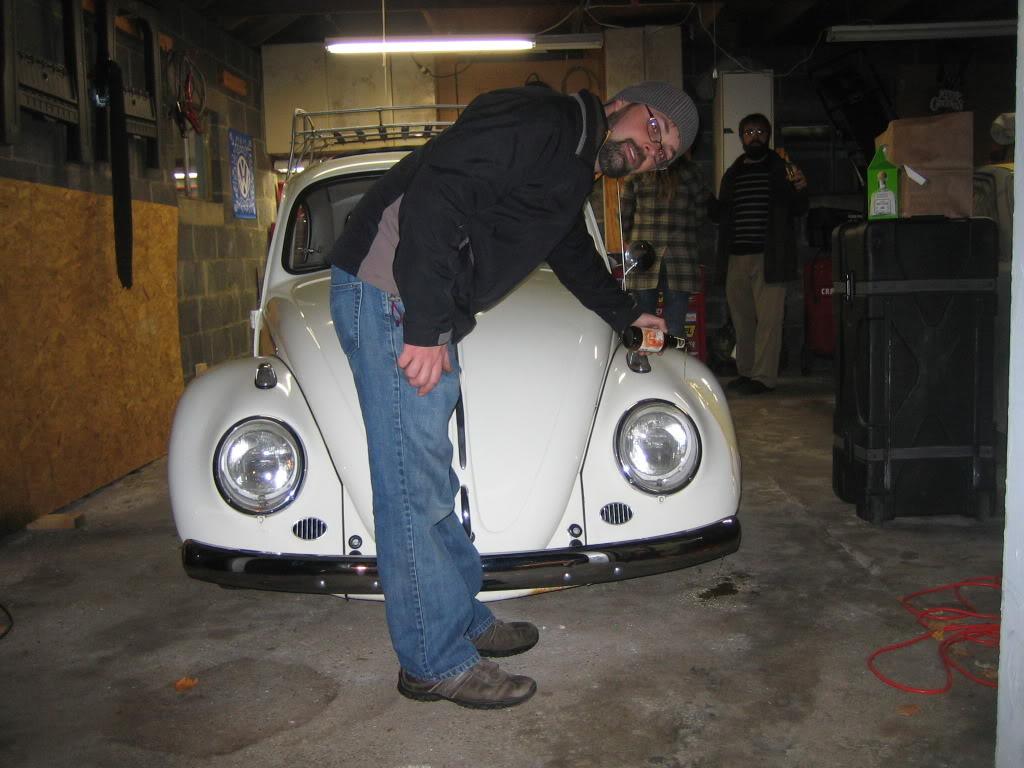 It was a quite a trip to be sure. We were on the road more or less for some 16 hours. I spend almost $200 on gas but I think it was worth it. The car is great. It has all the features I was looking for and plenty of character to go with it. I'll detail my plans later. For now here are some pictures I took this morning cruising around. I'm lovin' it. :D::D: 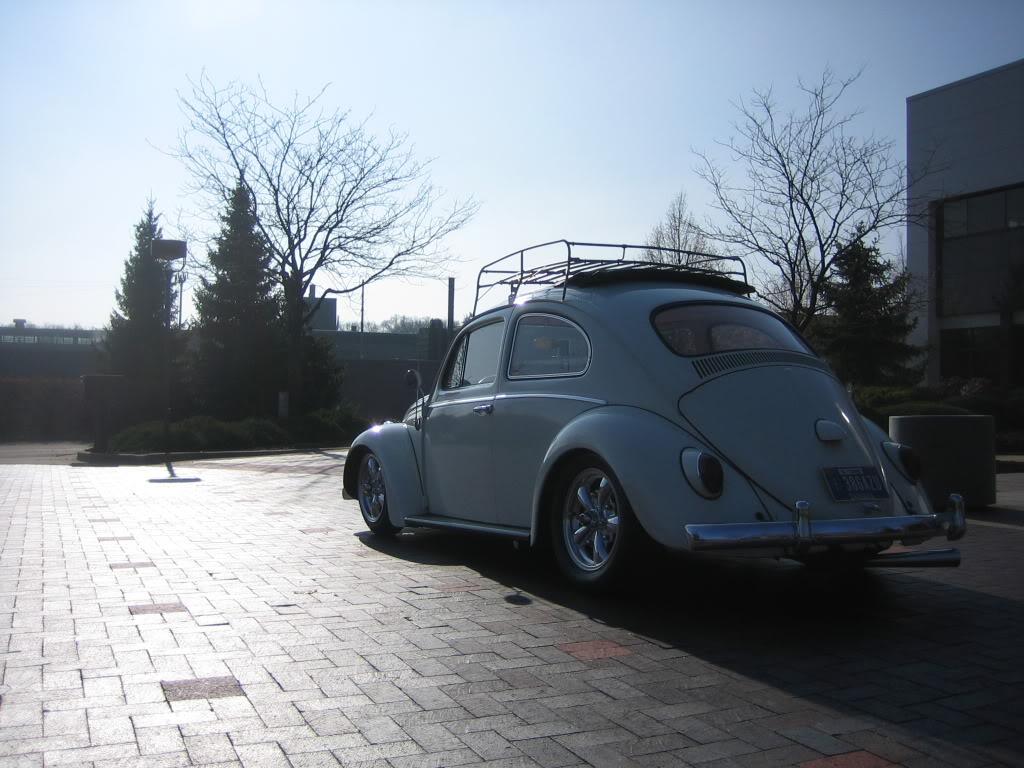 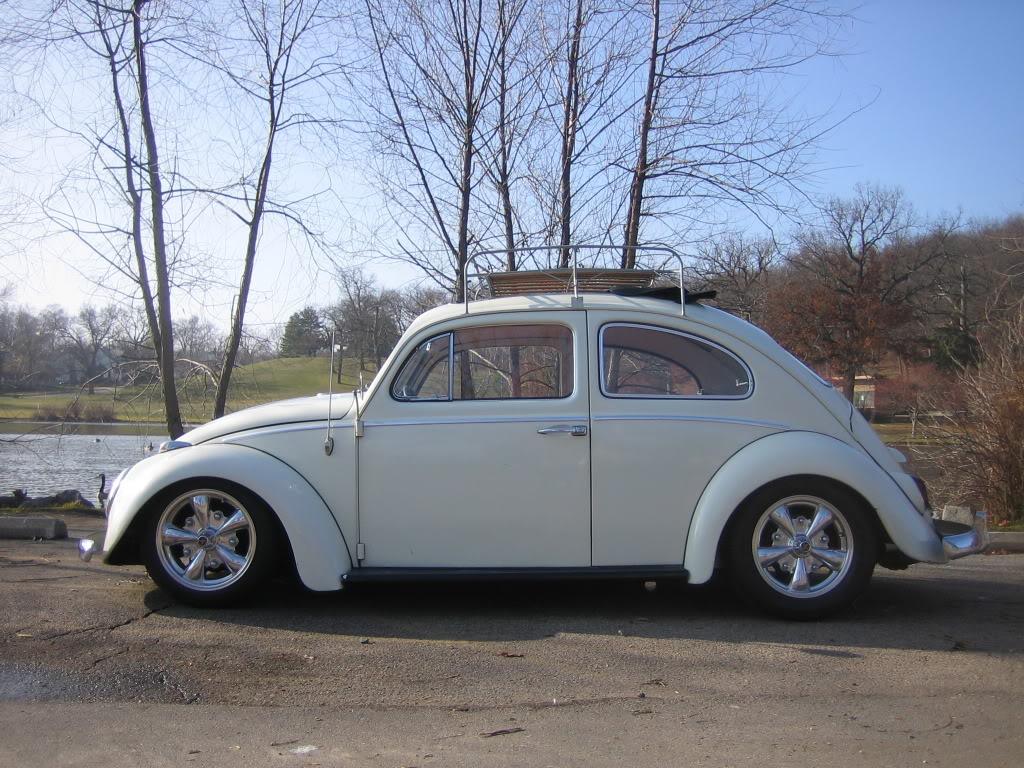 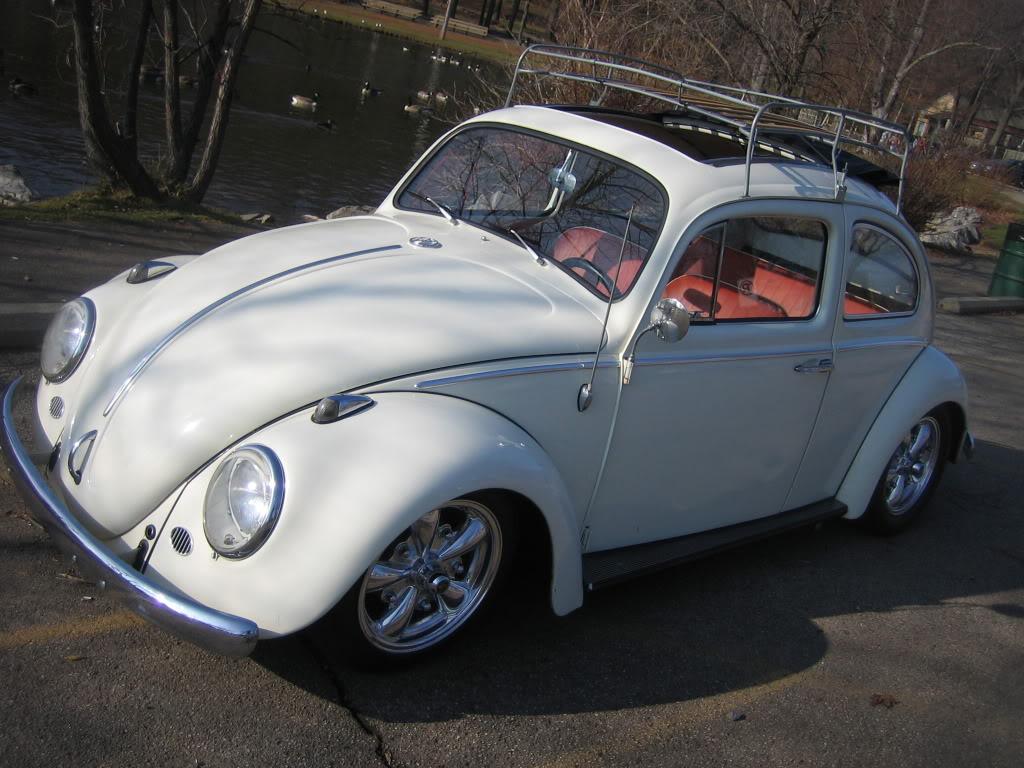 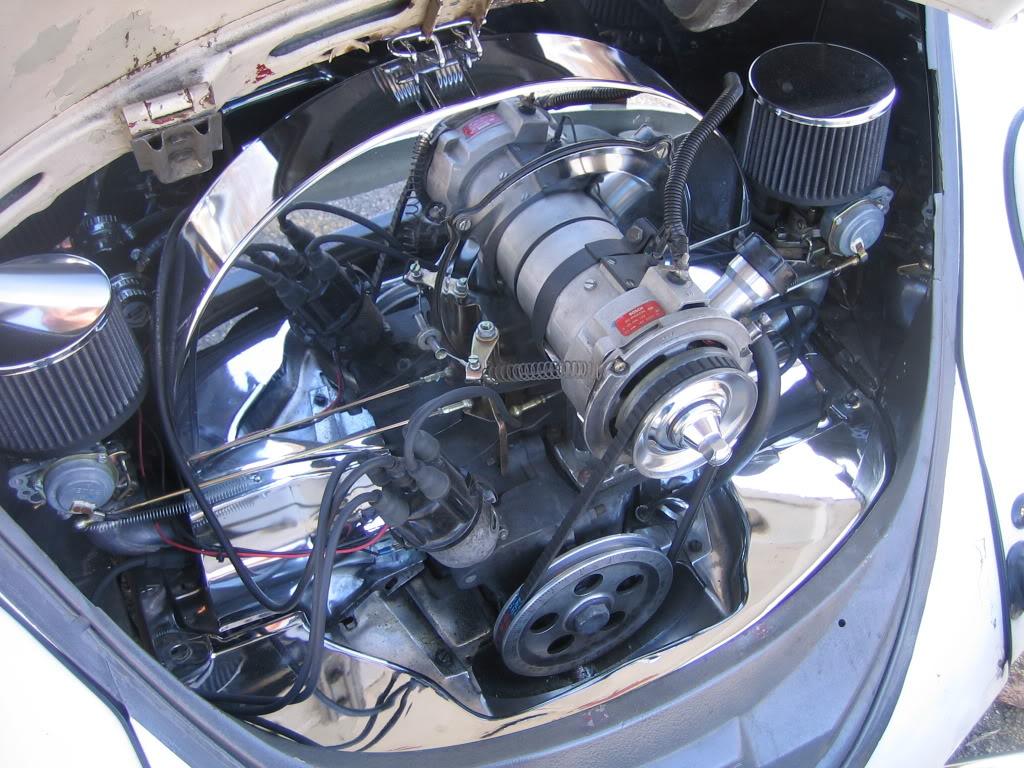 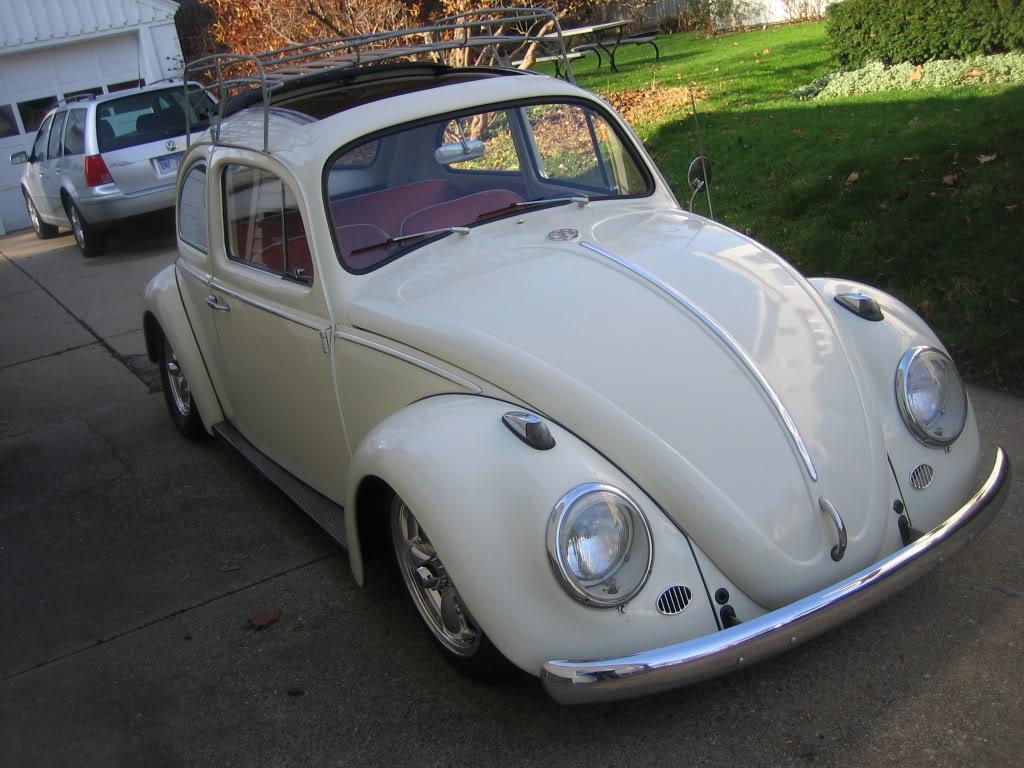 From what I remember of the add and what he told me:

Adjustable arm thing-a-ma-jiggers. Pretty cool. You can raise and lower the car with just an an allen wrench. Plus it doesn't result it super crazy camber (although I know some people dig that).

Megaphone exhaust pipe with no muffler (this has to go)

Tons of chrizome tins and such. (probably getting rid of those)

The car got impatient waiting for me to decide what the first project would be on her. She started marking her territory pretty strongly. There is a puddle of what appears to be brake fluid or gear oil under the right rear wheel. I'll be picking up axle seals, shoes, cylinders and fluid tomorrow. I also need to purchase a big arse socket for the axle bolt.

I'm still contemplating my wheel choice. Don't want to rush into this.

I'm not crazy about the super skinny wheels that a lot of folks are running. I like to see a little dish and some rubber on the road personally. 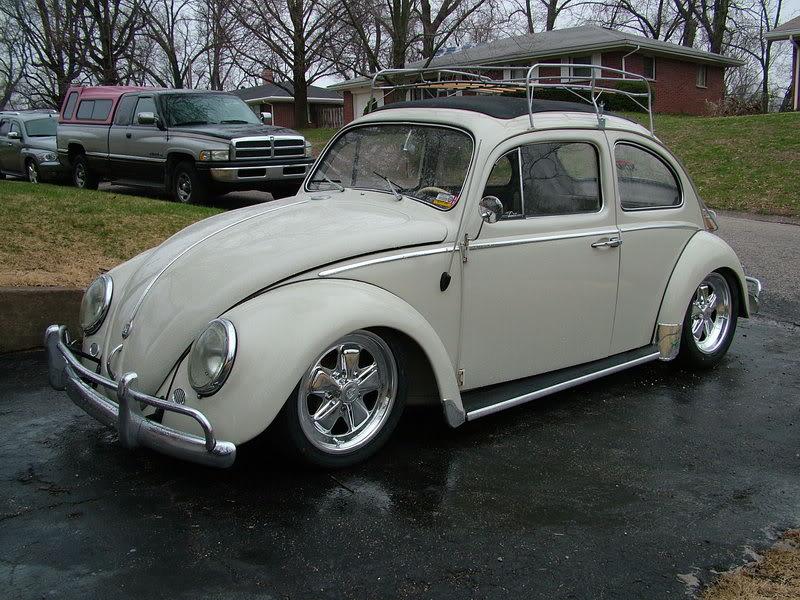 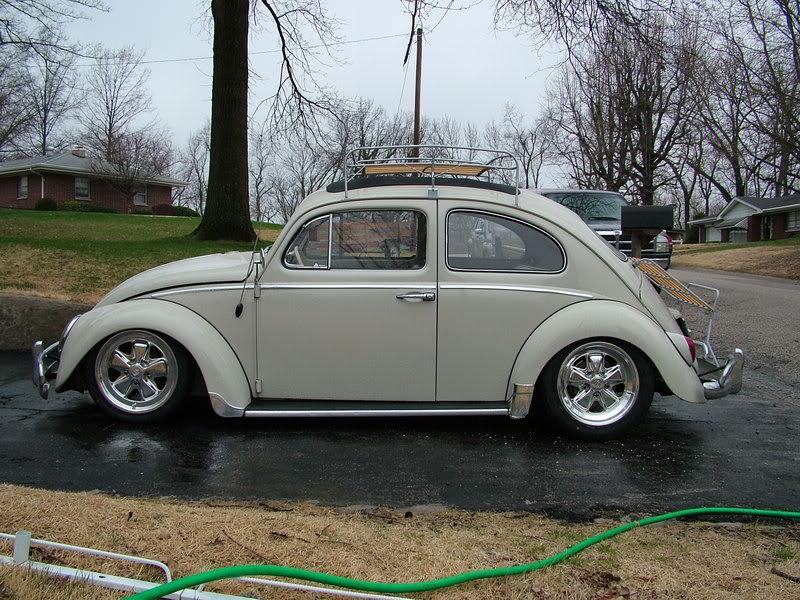 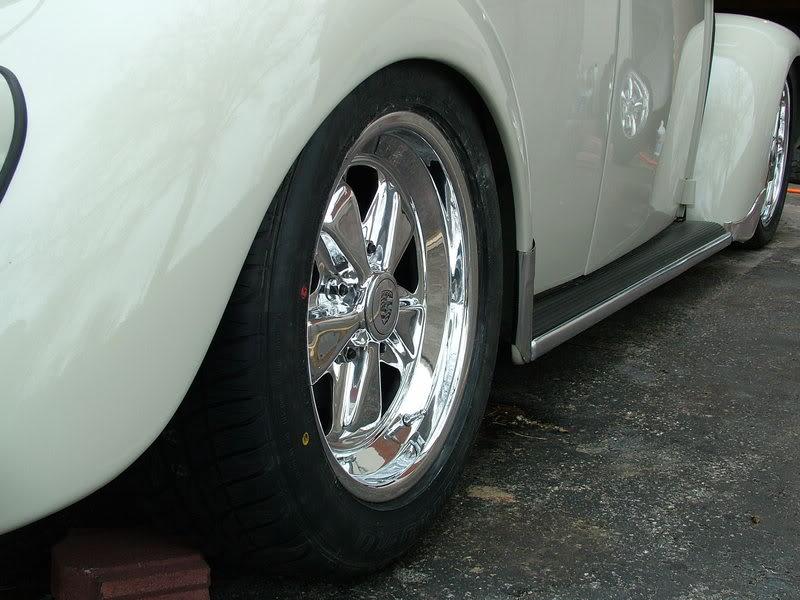 Also, this guy is running "short axles". What does that mean exactly?

I'm terrible at holding on to money. These should be on there way to me soon. 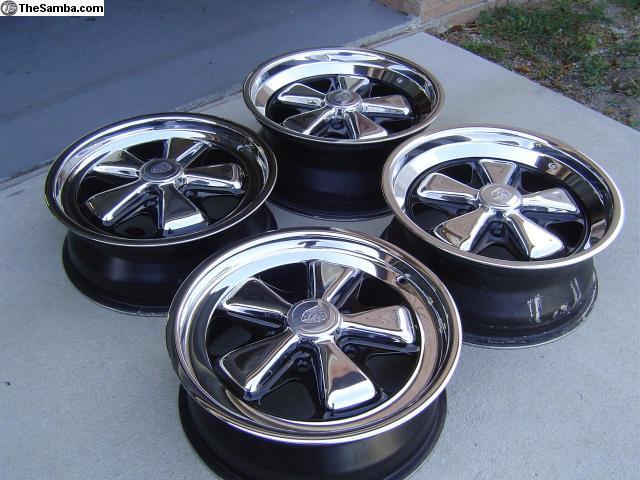 They are 16" six's and seven's. I just found out the guy doesn't actually have them, he has to restore a set to those standards and that could take a few weeks. Oh well, I guess I'm not in a hurry.

I haven't made much progress on this thing other then ordering parts.

I did install some new rear tail light lenses that aren't ghetto smoked like the last ones. It's hard to tell in this pic, but they look a lot better. 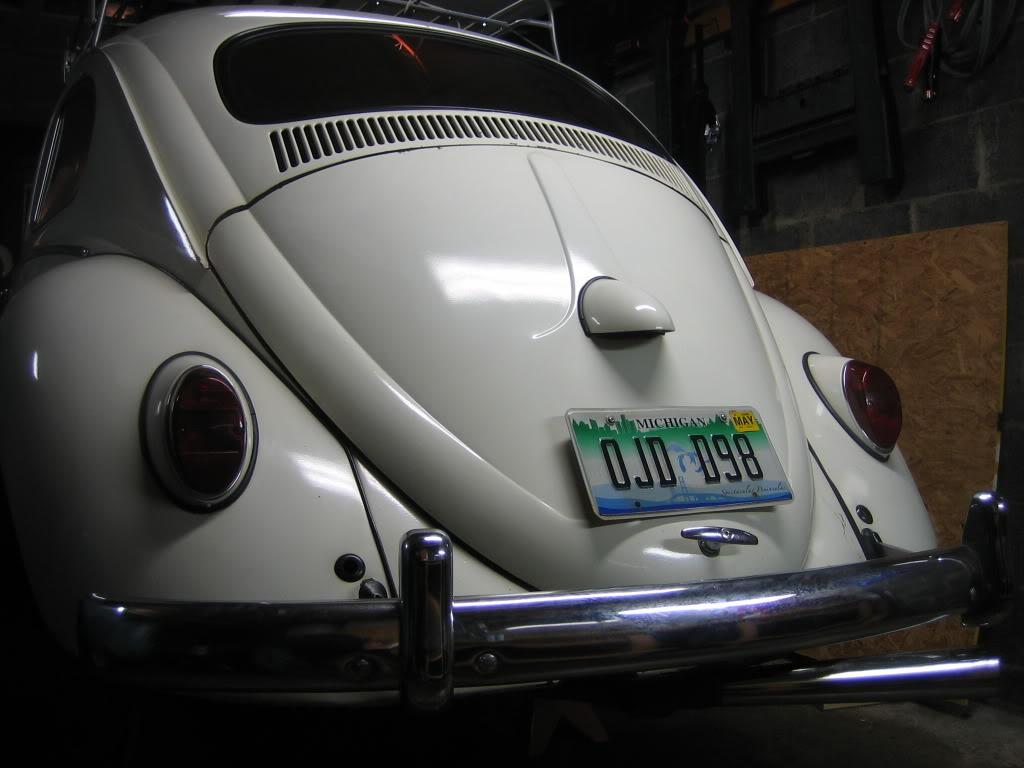 I picked up a couple odds and ends from the GAS storage facility that I might use. I also invested in some reading material that should help me in the new pursuit. 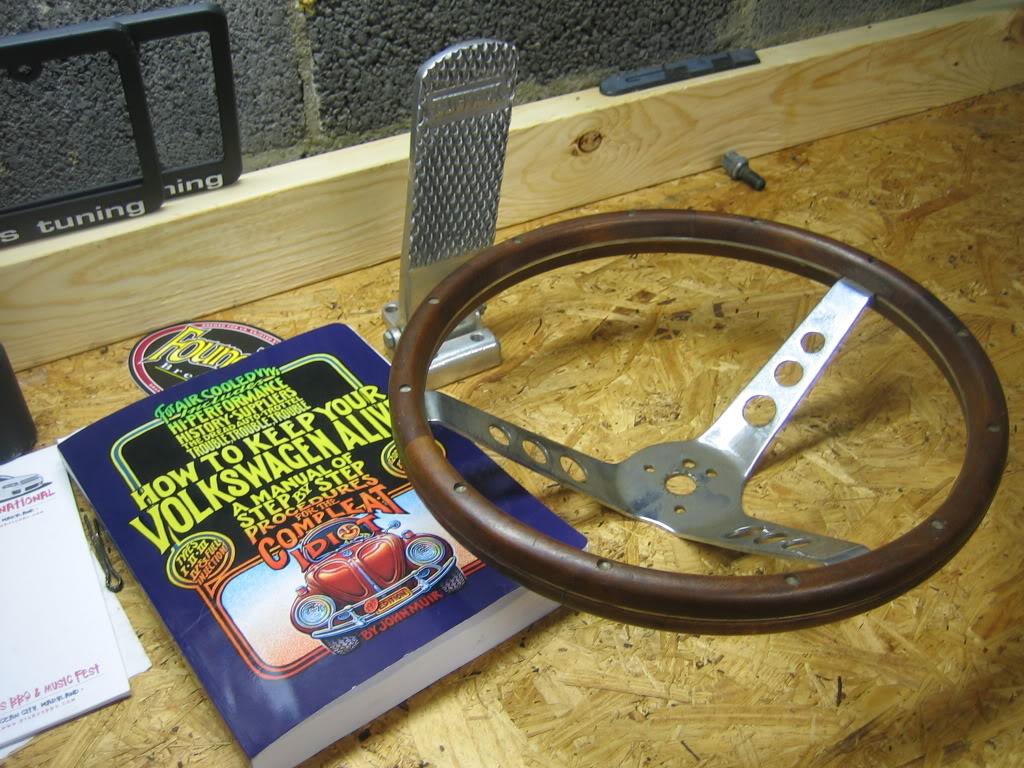 In preparation for the CB disc brakes on order I got the car up on jack stands and ready for action. This was quite a task by itself. There was a lot of 2x4s and various jacks involved but I got it up there 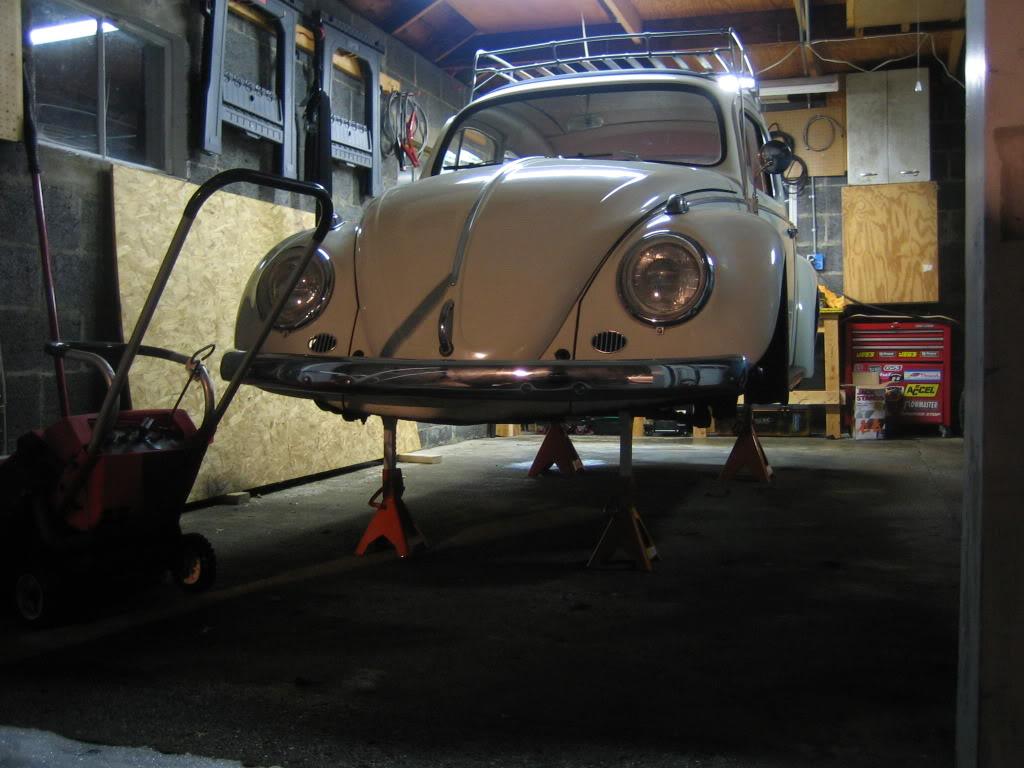 I finally had a chance to poke around underneath. It really is pretty solid. 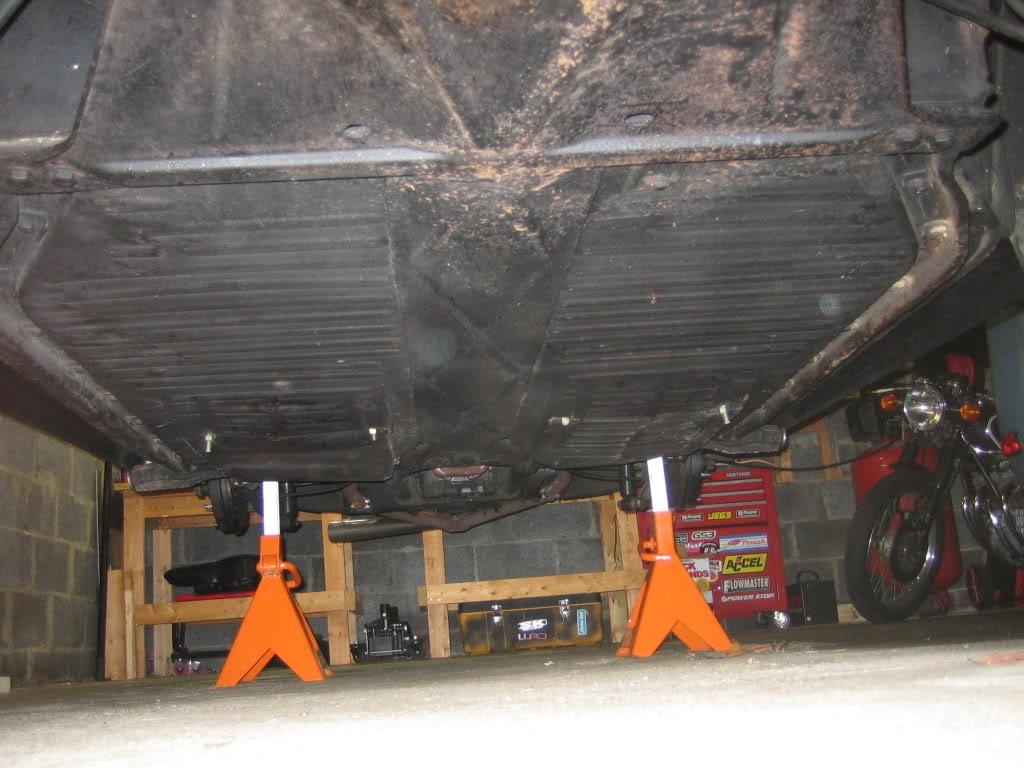 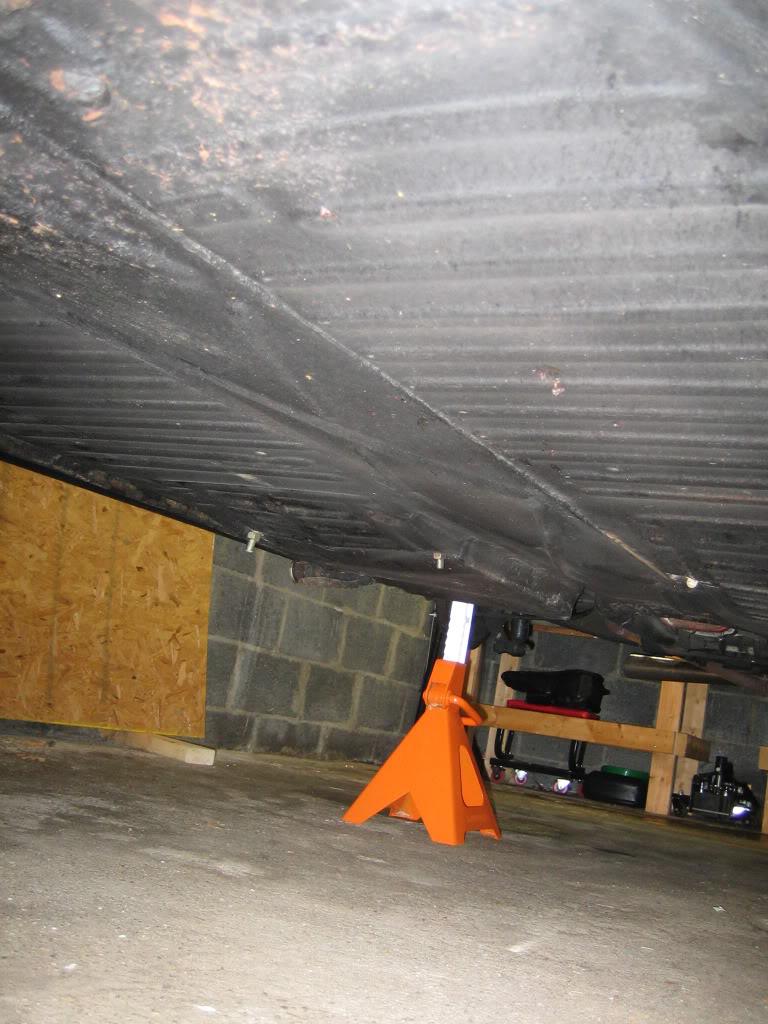 Now I'm just waiting for parts to arrive. If I don't see some stuff soon I may get the motor pulled so I can get started on some changes there.