Project: "Fox-E-Lady" or "How to ruin a running Fox for no good reason"

*EDIT* My lovely lady lumps likes "Fox-E-Lady" for the project. 'Cuz it's a Fox, and it's an "E"-lectric. Get it? Of course, other suggestions are welcome, but that's what I'm going with for now. *END EDIT*

OK, so here's the deall'yo:

I'm an electrical engineer at a small-time business in Jackson. We've done some electric car work before, but have never actually built one top to bottom. So, I decided that I wanted to do my own. I'm "competing" against my boss' old AMC AMX. Mine is a budget build. His is all-out spendalotofmoneybecauseIhaveitandthiswon'tbeeconom icalatallinfactthiswillbemoreexpensivethanusinggas oline.

I picked up a 30hp induction motor for $400 new over Christmas. It should put out as much or more peak power than the original engine, if I get enough batteries. I'm going to use lead-acid for the power source because they're cheap, but that's going to involve some reinforcement of the trunk and rear suspension. Not sure how I'm going to do it yet, but I have some thoughts. Batteries are prolly gonna be $1500 - $2000 for a set to get me from Lansing to Jackson. I'm going to lay out and build the electronics myself. Parts and assembly for three drives should set me back about $500, and I can program them at will, compared to $2500 for a single off-the-shelf drive.

Being a budget build, I had to land a cheap car that I didn't care about killing. My brother "wrecked" my dad's Fox about two years ago, but since the body and everything was sweet except the front end, I promised to take it off their hands for free, never to take up garage space again.

So, they finally agreed, and I drove my truck home and trucked it back up to Michigan, where it sat for about 4 months. Back in December I finally got a few minutes to pull the engine, so here's some pitchers of the first steps. Is all VW coolant that funny dark green color? Not that I care, since my car bleeds Spartan Green :D:

My sweet VW Transport (because it transports my VW):**EDIT**If this doesn't show right away, refresh the page. dunno

Half the delay was because I didn't want to dig it out: 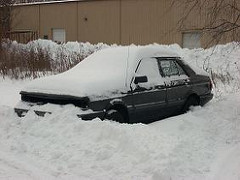 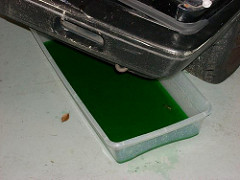 Any takers? It started and ran nice in December. 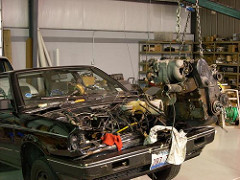 What the hell is all that stuff? I guess if I don't know, I can rip it out, too, right? 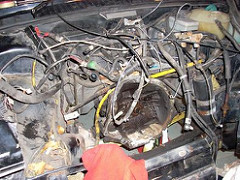 So, I gotta admit, I first joined this forum for VW advice and as an outlet for selling parts. I haven't sold any parts yet, and after poking around this site, I'm really starting to come around to VW. I'm getting visions of a future overhaul with a 100hp high-speed motor (300hp peak) with an airbag suspension and NiMH or Li-Ion batteries. Maybe when I win at Club Keno. But for now, it's time to get this thing running.

Oh, I apologise for hurting your eyes with those pictures. I took them all ('cept the one my mom took of the truck) with our work camera. It has a flash, but no exposure compensation or white balance. Effer. I was too lazy to take them home and Photoshop them, and too impatient to wait another day for me to bring my camera or my GF's digital back to work.

I'm keeping the clutch and transmission intact. Unless you want it and have cash money...

I was going to ditch the clutch, but then I would have to drive a crashbox, or program the drive to sync the motor with the transmission for whatever gear I'm going into. Since I'm not telepathic, at least with machines, and I didn't want to push a button saying "I want 5th gear now", that just seemed like too much. So, the clutch stays. Makes it easier to let other people test-drive it, too.

I had considered RWD, but that would require more modification than I'm ready for.