Well people I am finally building her! I have threatened to build another Bunny for years. Its tons of fun putting together cars for friends, enemies, customers and everyone else in between, but my own projects have suffered from lack of attention.

After helping Patatron out several years back while he built his tan bagged bunny, I knew what I was looking for for my next project. I wanted an older German built golf between '75-80.

Since at that time I lived on the East Coast, it kept getting put on the back burner. Your simply not going to find one of these cars out there. Heck finding a rabbit of any vintage in even okay shape is expensive. Fortunately a move out to Utah made this dream finally become a reality.

Last summer I finally got the call I had been waiting for. "I know where theres a clean '77 in need of rescuing." When I got there I found this gem. 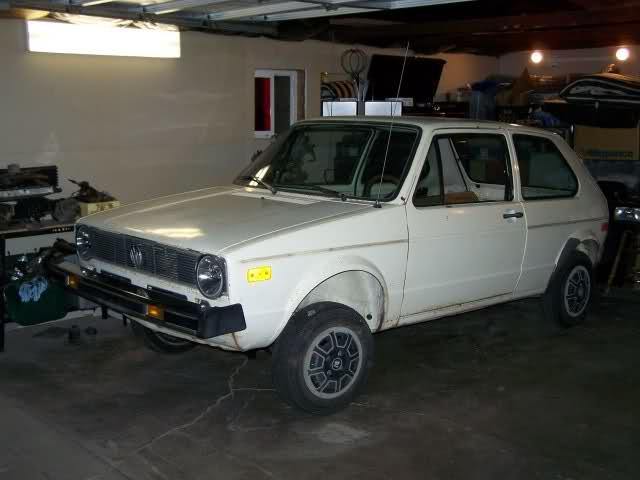 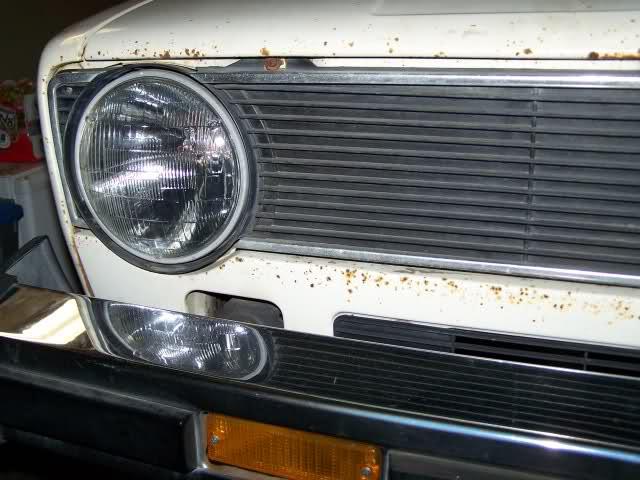 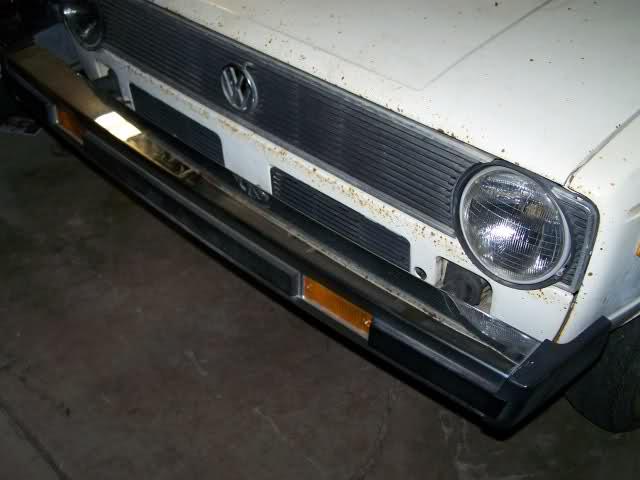 Pictures realy don't do her justice. The body on this car is in damn damn good shape. Dents and dings total out to be three of them. Two you realy have to look for and a third thats still an easy fix. My buddy gave her this stamp of approval. 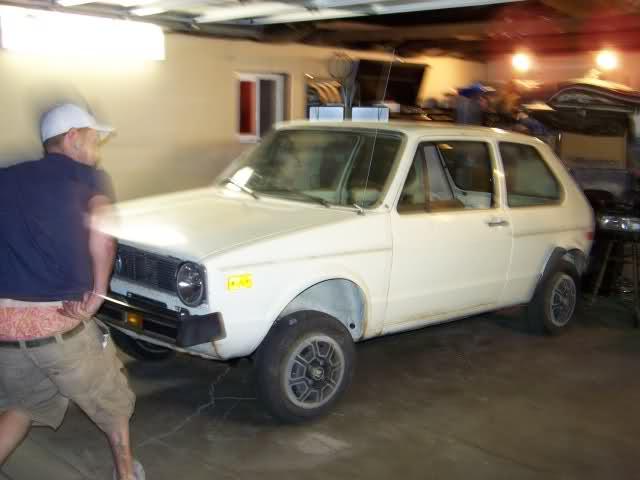 We were quickly off to gather up the neccisary funds and to gas up the ford. Soon we were leaving with this! 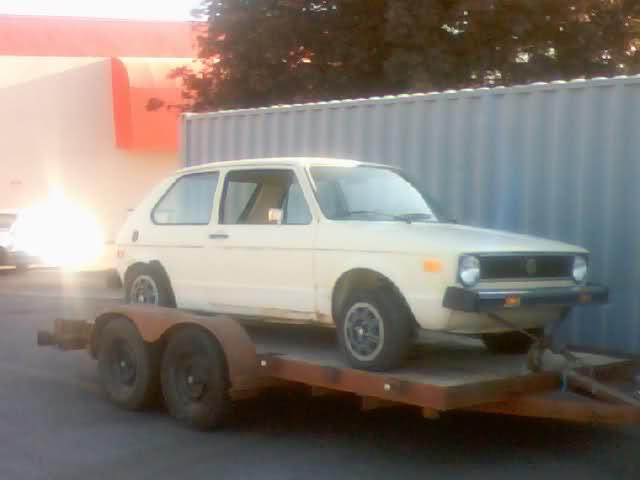 I know that pics not the best but oh well. The ride home was actualy a little too eventfull with a broken strap causing a few moments of panic.... All is well that ends well though and we managed to get pulled over quickly enough.

She came with an interior FULL of cool and rare old parts. Some old 4 speed trannys, a 1.6L motor, old pre lambda CIS setup, a couple distributers with the dual vaccume cans and my favorite.... The dash! This was a large part of the reason I wanted one of the older rabbits to begin with. 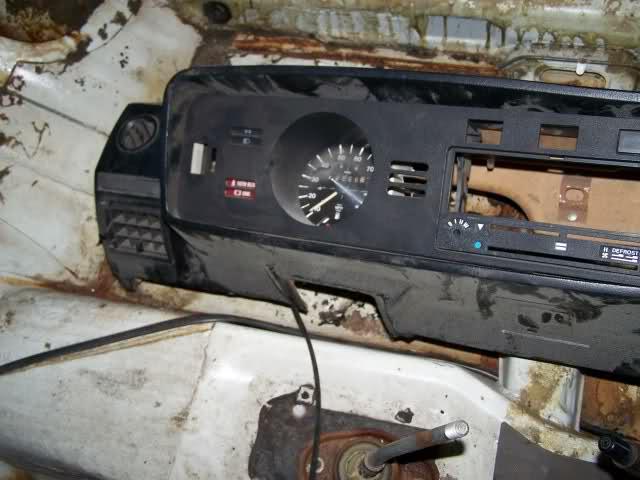 And another cool little gem found in the car. For those not in the know, the early bunnys have metal stalks. This car actualy came with two sets. Supposedly they can be polished up nicely. Might just have to give it a try! 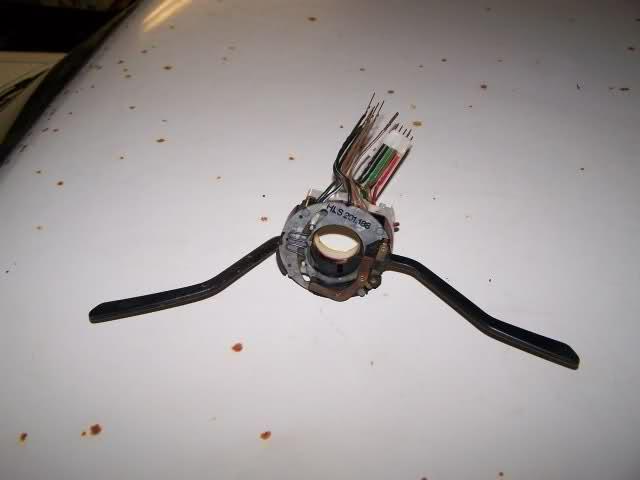 So it was time to start collecting parts. Wow it was a good summer too. I scored so many little goodies I can't wait to post up pictures of everything. But to do so tonight would take me hours. I litterly have a nice shed full of bits ready to go now.

I have a very defined gameplan of how she will be built and what the final outcome is going to be. As always I will be boosting. Nothing too insane as this will be my daily driver. So heres the setup going on her. 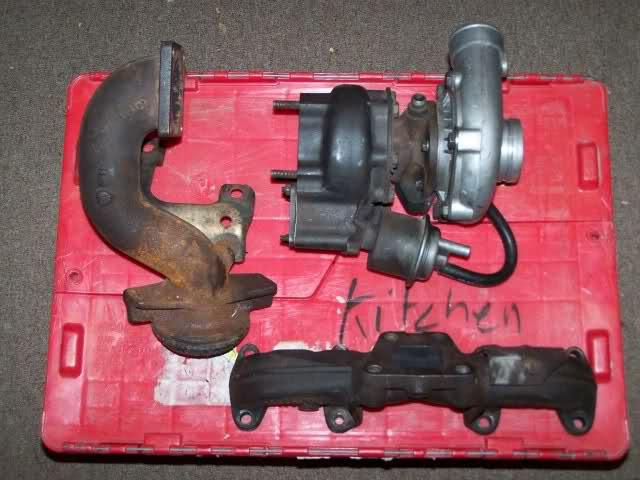 Nothing insane, but OE and RELIABLE. After living with my turbo cabby for over 4yrs... those who know the stories will laugh and understand why I fell in love with a turbo setup stamped with vw part numbers...

Monor issue discovered though is this does not bolt onto a counterflow gaser head. It interfears with the intake manifold. Oh well. I already have a solution to tackle this anyways in the works.

Mmmmm so so much to do. Problem is where to start? Well first off I needed to clean out and inventory what was inside her. 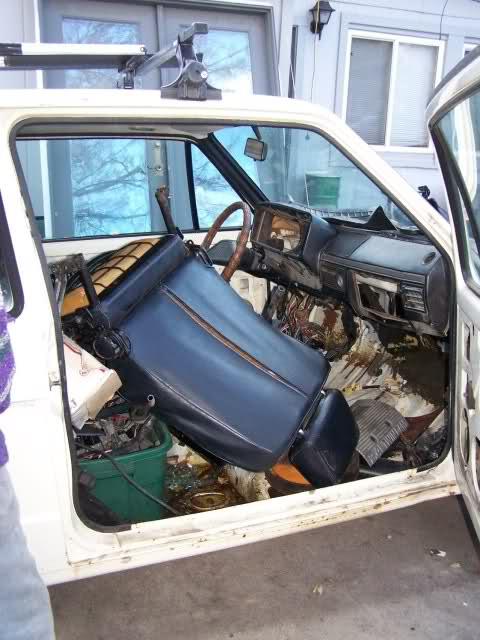 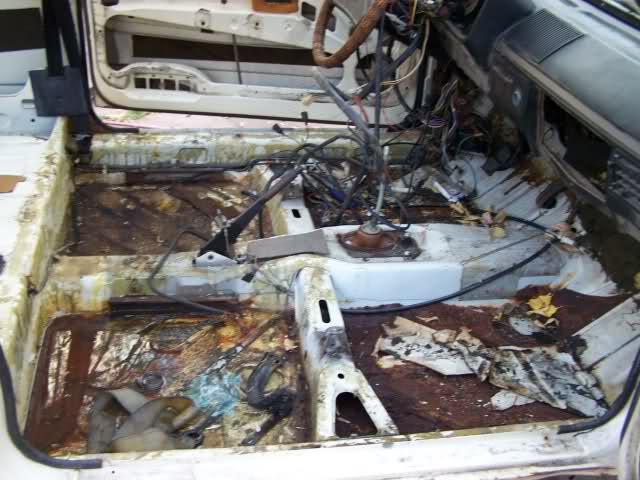 Unfortunatly my generous nature had bit me. When I went to get my pressure washer out, I discovered one of my freinds had apparently broken it. So cleaning the interior out further to get a closer look at the floors has been put off for now. I am hoping I didn't put it ff for too long though as now winter has set in and I have a nasty greasy and icy mess.

Well it was time to do some more cleaning. Ed was bored and decided to remove some brackets in the engine bay. Fortunatly the PO had been kind enough to hand us the car with the engine mounted here.... 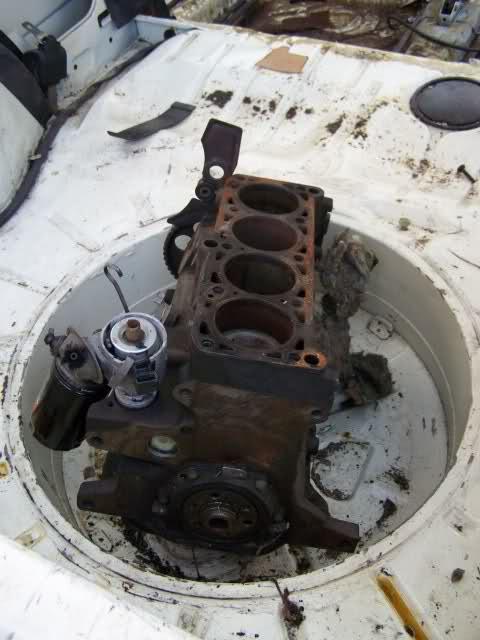 So it was realy easy to get into the engine bay and start cleaning!

I am realy tempted to run this little GEM. But I have other plans for it and ts unlikely to end up in this Bunny. Still.... Tempting. 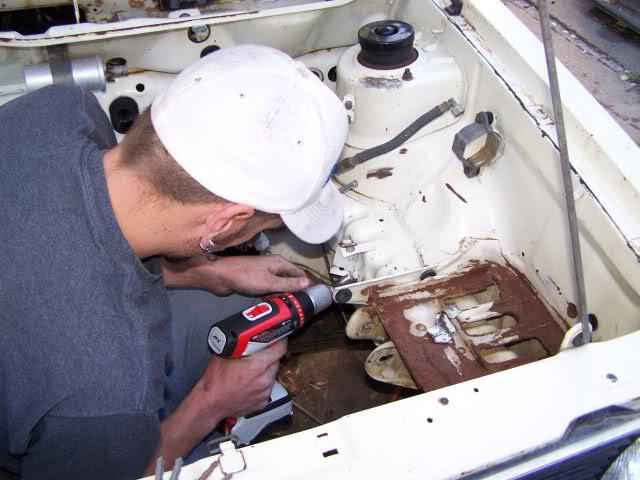 I didn't get much more done until winter set in and I decided to tackle the suspension so I could move her. This stance was just too much... 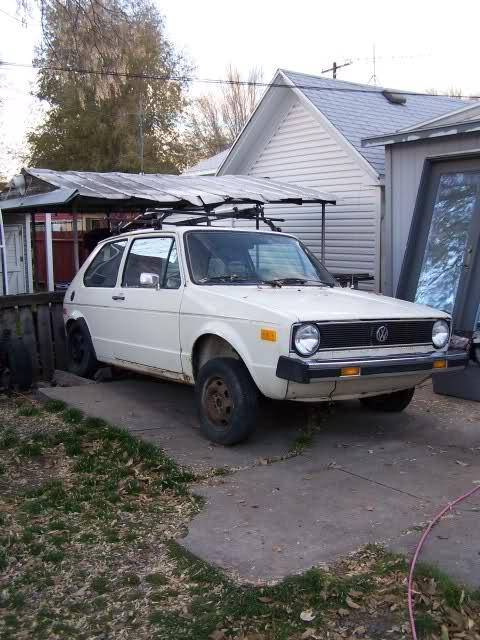 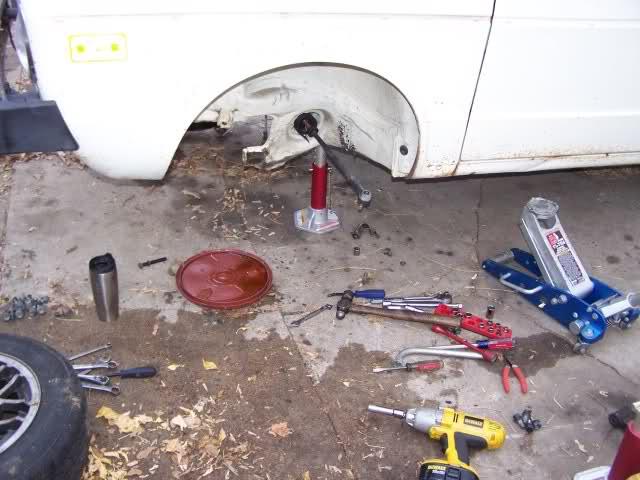 I know "pics or it didn't happen" but hey I had so much fun I forgot to take pictures of the H&R coilovers after I put them on. But I did snag some after shots. 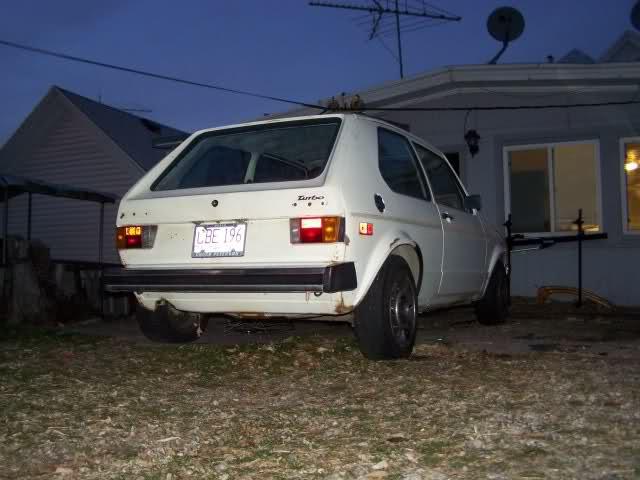 I know she needs to be lower. Have no fear there we will be going a LOT lower. In fact in this last picture only the front has the coilovers on. I still have some tricks to pull out for the rear axle and I realy am not sure what one I will even run as of the moment.

Lemme toss this out there. I am going as low as I can with regular H&R coilovers. When I swapped the front suspension out I put front a-arms on it and brackets for an OE swaybar. I am exactly reproducing the suspension I ran on my cabby for YEARS and loved it. My thought is to swap in the rear setup also.

I wanted to change up for ultra low H&R's but decided to body drop it some instead if I need to. I think I can still get away with running the swaybars as I am realy more interested in handling than in the end getting it another half inch closer to the ground. Handling has to come first.

I dought I will change my mind on the swaybars, but I am willing to listen to experianced opinions on this as I have seen some people saying that they are actualy a bad idea...

Well I got lots more goodies to post up shortly! Stay tuned for more pictures!

It actually came with that badge! I pulled the others off for the time being. Might keep that one, but probably not. To badge or not to badge is one of the few questions I am not really decided on.

Mmm I am not sure on the turbo actually... I don't know much about it other than its "supposedly" off a MK2 TD and I know its not a T3. The Mad Scientist looked it up on his fresh ETKA install last night and proclaimed it to be a K24 turbo. I have been wondering about that wastegate setup myself.

A quick search only finds this picture... 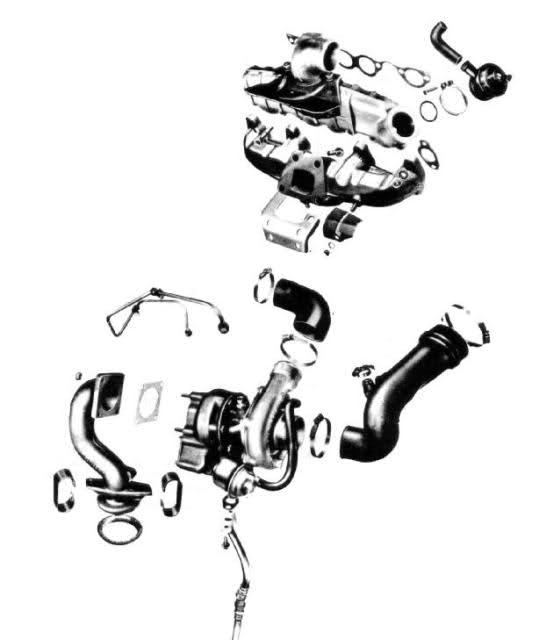 Doesn't tell much but the angle of the wastegate actuator is a lot different from the VNT setup. I would like to know more about this particular turbo though.

I will fix the problem by never having a counterflow clearance issue to begin with. No flipping or clearancing will be required.

I want this engin bay clean and bare. Theres not goign to be intercooler piping going everywhere, or anywhere actualy.

I have a few tricks up my sleeve to pull this off.

So I have gotten a couple IM's and emails about the turbo setup. I never intended to run the TD setup on a counterflow. I actually got it in trade for a new SPA manifold I had because it didn't fit on the counterflow.

It is possible to it this on a counterflow, but not easy. It requires flipping it over then a CRAPLOAD of clearancing of both the flanges for the exhaust and intake manifolds. Then the reinforcing ribs on the bottom (now top) of the exhaust manifold need to be cut off.

After doing this it changes the location of the turbo outlet to the undesirable passenger side. Its a pain to clearance the DP over here. Oh and the turbo now needs to be reclocked. No big deal here. But the final kick in the pants for me was the fact that flipping the turbo and manifold makes the OE bracing brackets useless.

I had a lot of downpipe reliability issues with my cabby setup and I really wanted a complete OE setup.

Another possibility on a counterflow would be to reuse the diesel intake manifold and simply relocate the throttle body to a different location. On my setup though I am trying to eliminate all extra piping and plumbing not absolutely needed. A remote TB would be awesome though and if I used that I would retain the OE diesel blowoff valve on the manifold and add a second one between the TB and intercooler. Would give a killer dual/sequential BOV hit!!!

Mmmm okay I am not sure what type of turbo this is but its not a T3. Or not a standard one anyways. The bolt pattern is wrong. I have always understood that "t3" primarly refers to the bolt pattern and the basic spool cartridge type. As for the cartridge though I am thinking a T3 one would interchange with the K24. For now I am going to go with the assumption that this is a K24.

Lets pull up the ETKA information on this and see what it says. 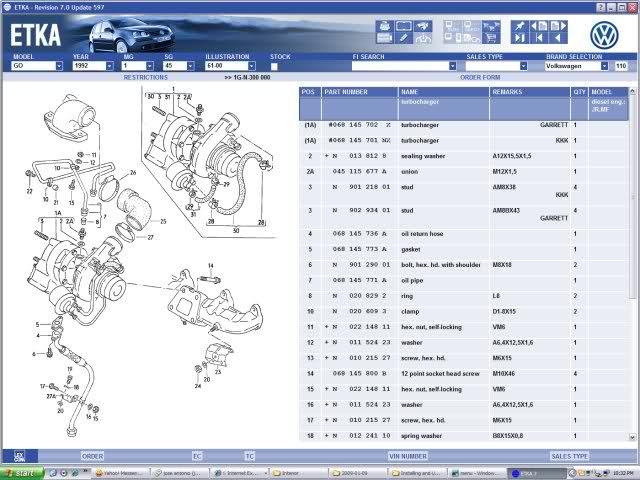 That doesn't tell us much. Anyway simply adding a t3 weld on flange to space this out isn't going to do the trick. When I get a chance I will take some side by side shots with a T3 for comparison.