This how to is for replacing just the oil filter housing only. If you have an aftermarket airbox or just a cone filter, then you are in luck. It is fairly straight forward.

If you need to remove the stock air box, you can follow K&N instructions found here: http://www.kandn.com/instructions/69-9000_inst.pdf

Some people were able to replace the housing by just moving the stock airbox to the side. Removing it completely and putting it back is fairly difficult.

(1 is air filter changing and 10 is engine rebuild) 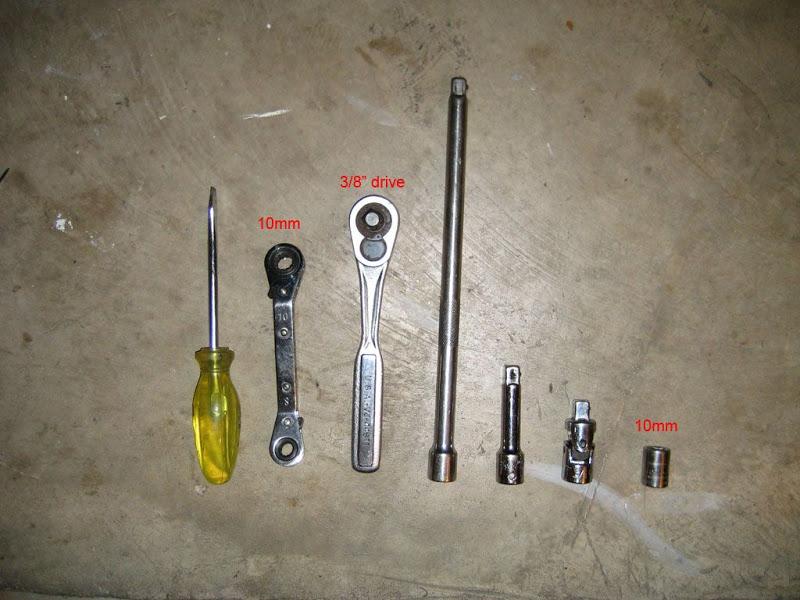 For the following steps, use the image below. The number on the pictures is the order in which the parts should be removed.

Items in green are stuff bolted to the housing.

Items in red are the bolts that secure the housing.

Items in blue are other parts that attaches to the housing.

For removing the bolts, I used the 10mm ratchet to loosen the bolt. Then I used the 10mm socket and swivel to remove it completely. See image at the end of this post. Everything can be removed from the top of the car. If you have problems or difficulties, the lower bolts can easily be accessed from under the car.

NOTE: I would recommend you tap the holes on the new oil filter housing where the dip stick housing and wire attachment bolts are secured before installing. It seems that these holes need to be retapped. It is much harder to get it straight when the housing is on the car. 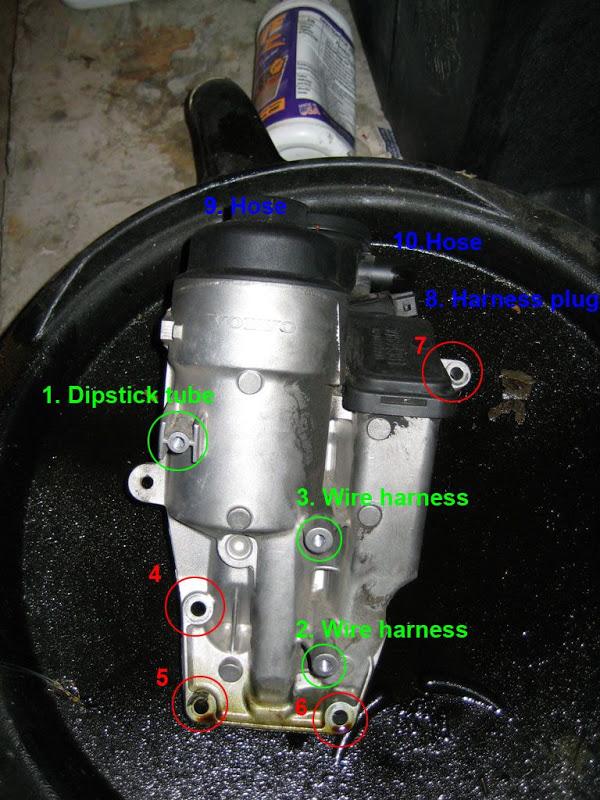 1. Remove the bolt that secures the oil dip stick holder attached to the housing. Number 1 in green.

3. Cover the hole where the dip stick holder removed with some paper so nothing can accidently fall in.

4. Remove the bolts that secure the wire harness attached to the housing. Number 2 and 3 in green.

5. Remove the bolts that secure the oil filter housing to the engine. Number 4-7 in red.

Note: If you have difficultly getting to these bolt, they can also be easily accessed from under the car. See image below.

6. Remove the harness plug on the housing. Number 8 in blue.

7. Remove the upper hose clamp using a flat head screw driver to pry it loosen it. Number 9 in blue.

9. Remove the oil filter housing and while wiggling hose number 10 off.

10.Clean off the dirt around the openings.

11.Reverse steps to reinstall. Note: The image below shows how to use a regular hose clamp for the upper hose. 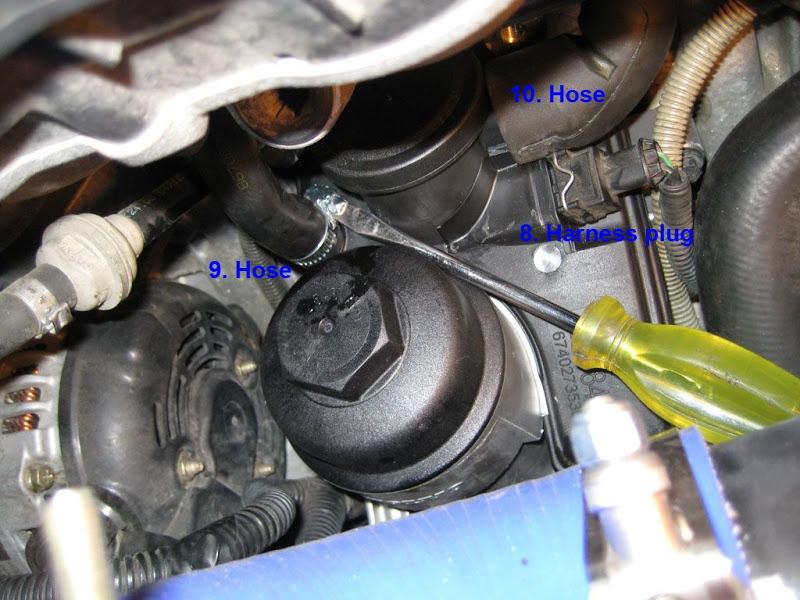 Alternate access to oil filter housing bolts from under the car. The part labeled 227 is the new housing: 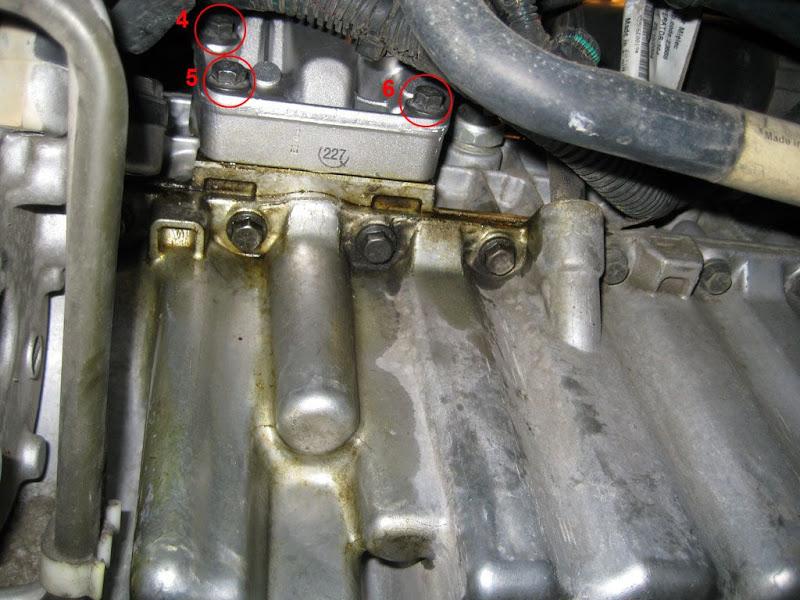 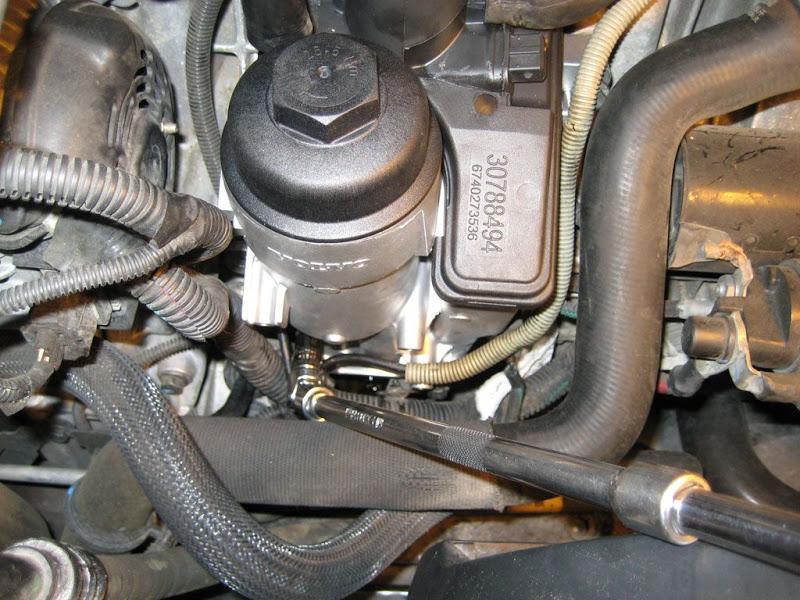 Please let me know if I missed anything.

If your engine starts making a pulsating squealing sound, then it means the PCV is clogged. This is located in the oil filter housing and can not be replaced seperately. If you run in this state for too long, you might see oil spewing all over your engine bay.

A good test is to pull the dipstick and the sound goes away. This means the PCV is clogged.

Dealer charge about $500 for parts and labor if you are not under warranty.

Past Threads about the squealing problem:

Thread with pictures of what can happen: