Hi folks..some of you may have read my other thread where I did the same thing...but to be honest I think there should be a thread with JUST the engine build...Step by step factual stuff..Dont know if im going to be allowed two build threads on the go at the same time but hey ho!!

If you want general engine build info with loads of waffel then check out the other thread, but I would like this one to be just the build please..Of course you can feel free to make comments...but Im not changing the specs or fitting different cams ect ect...What you see is what you get..

Here we have a newly bored 1275 block, its had the bores taken out to 73.5mm, im sure you all know thats 1380cc. Its had new cam bearings and they have been reamed to the cam size. 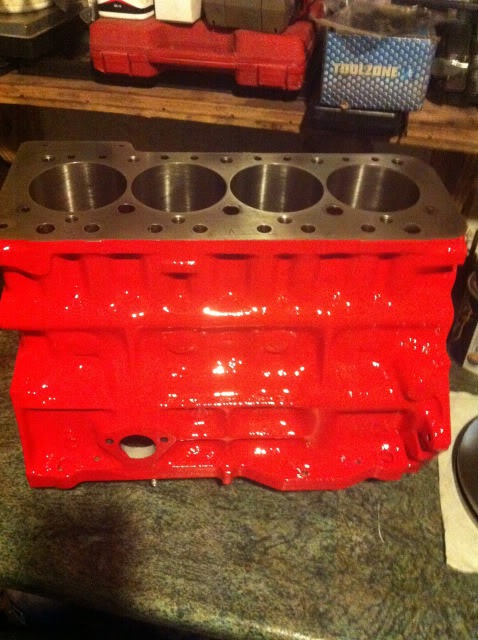 The 1380 pistons have been fitted to the rods which were end over end balanced.. 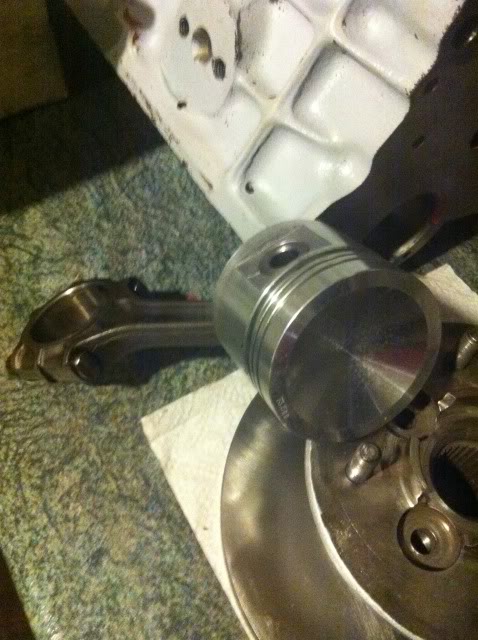 I cleaned the block thoroughly before starting, but because it had been left over night I gave everything a good blast with the air hose before starting, Yes some bits came shooting out of the oil galleries..so its always good to check. 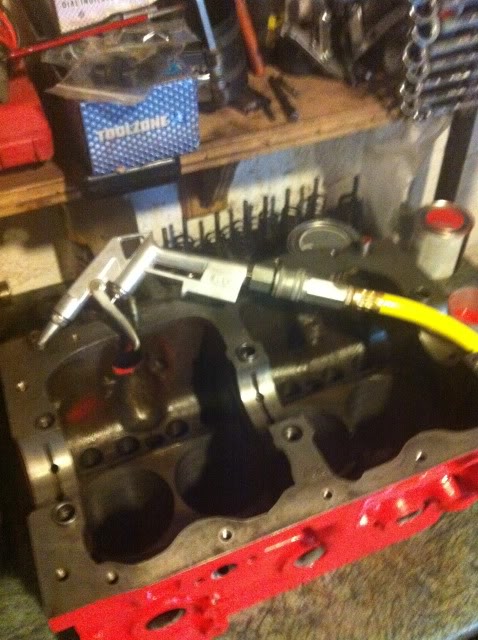 I use this stuff on all the bearings and followers. Its great stuff and really protects the bearings on initial start up..Its a bit messy though.. 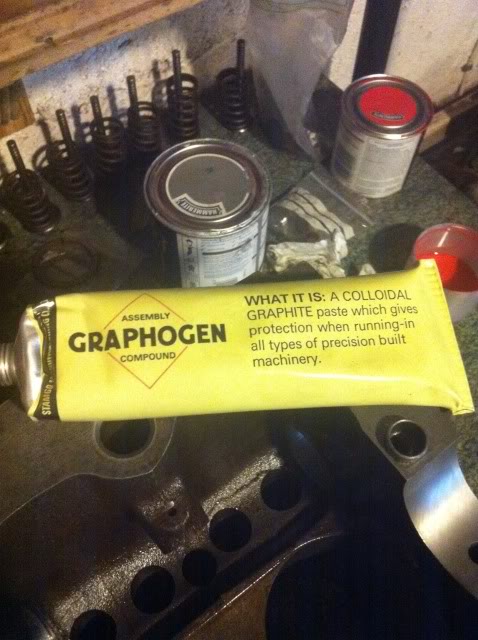 Right so once Im sure everything is spotless, I spread a small amount of the paste onto the new cam followers and smear it all around. ALWAYS fit new followers when building an engine they are only a few quid and its one of the major high wear points in the engine.

Once the followers are placed into the block, I use this stuff on the faces where the lobes rub. 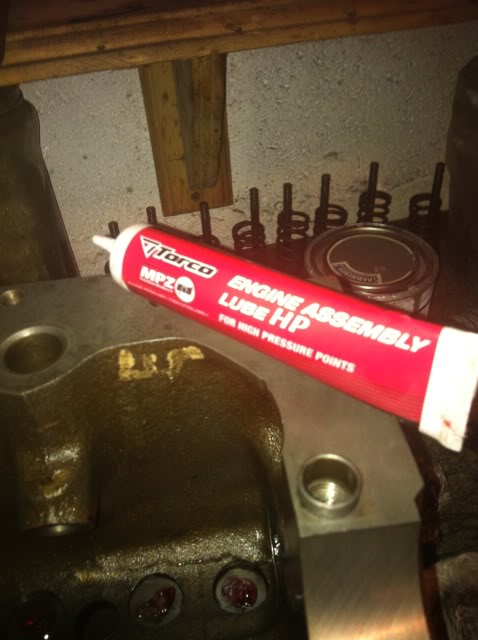 Its the same sort of stuff as the Graphogen. but is fomulated for the high wear points. At least thats what it says on the tube. It sticks to the lobes and followers and creats a sort of protactive film. 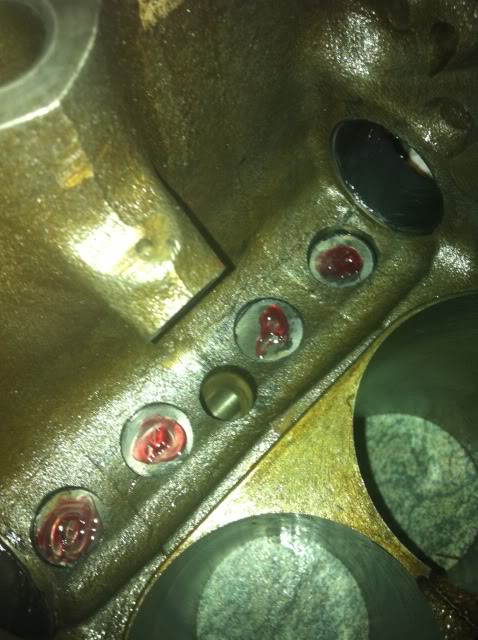 I was ultra carefull when fitting the MG metro cam, I moved it over the new bearings very slowly and made sure not to let it bang into anything. The bearings were given a smear of the Graphogen stuff.. 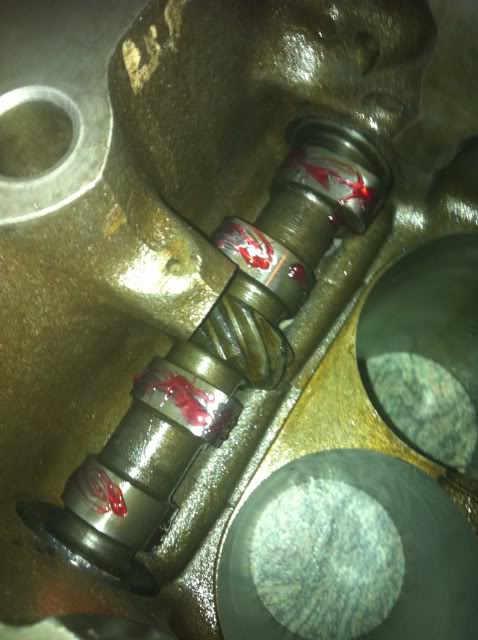 So there it is all fitted with the lobes covered in lube..

So next it was time for the crank to go in..I had it checked and then spent ages cleaning it. Particularly the oil ways..a good blast with the air hose to make sure and its time to start.
First thing was to give the faces where the bearings sit a good clean with some 2000 grit wet and dry. then a smear of oil and the bearings can go in. 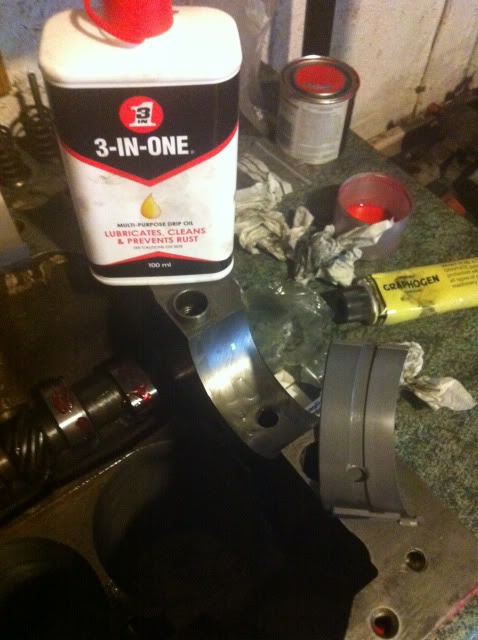 Once they were fitted I gave them a coat of the Graphogen and placed the crank very gently in possition. 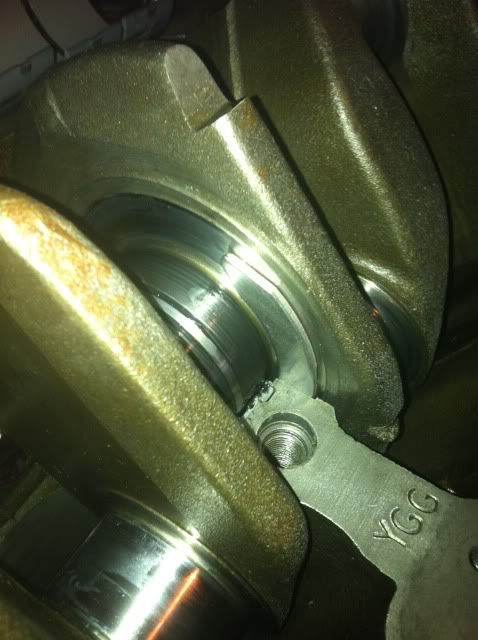 I then gave it a couple of turns to make sure it was smooth on the bearings and fitted the new thrusts. They will go in very easy by just pushing them into the slots and turning the crank around. You can just see the end of this one as it goes in. 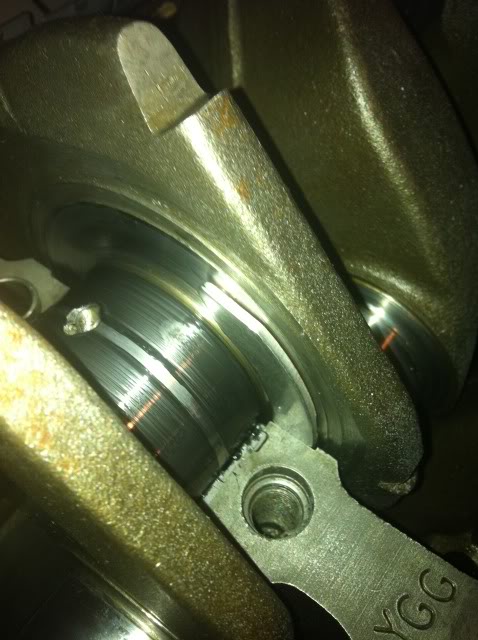 You can also see the paste has coated the crank journels as ive been turning it.

Next was to fit the caps..I placed the center cap on first after fitting the bearing of course, not forgetting the thrusts. these ones have the lugs which locate into the center cap.

Once the center cap was on I made sure the crank was still turning smoothly before torquing it down to 56nm. The crank should still spin freely with the cap torqued down. If it doesnt turn with just two fingers then something is wrong!

Next its time for the other two caps. All cleaned up. oiled, and ready for the bearing. 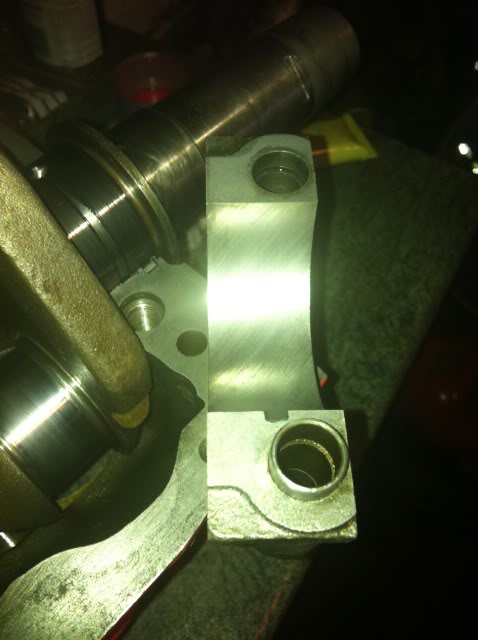 After each cap is fitted make sure the crank still turns freely. Then once you are happy set the torque wrench to 85nm and make the final turns. Do this in one movement of the wrench. It should only be a quater turn before it clicks.. 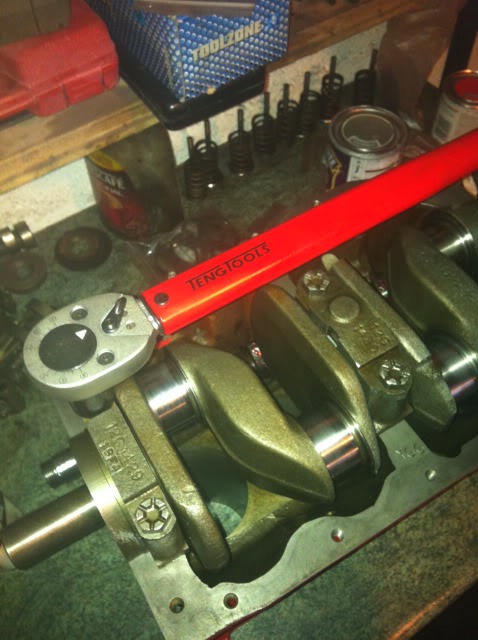 Again check the crank is free to turn with two fingers and thats you done...Well for this bit anyway. 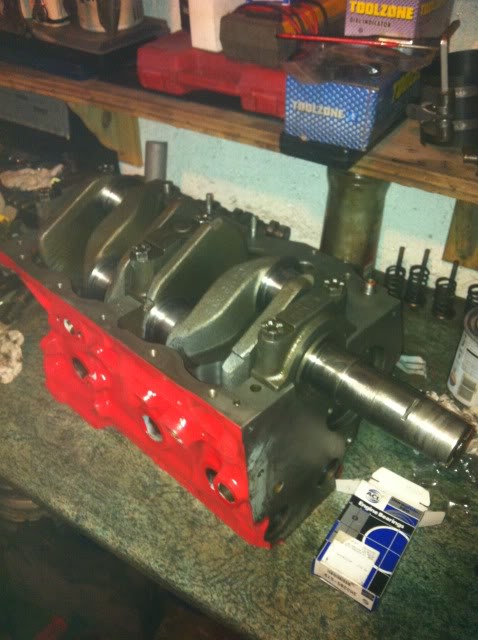 I will fit the pistons and post that bit tomorrow...

I hope this will be usefull to some people who are wanting to rebuild their engines...

I got one of the pistons fitted so thought I would do a quick update..

Here they all are with the rings.

I fitted the rings by spreading them over the pistons with my thumbs..I have a piston ring tool but prefer to do it this way as I can feel the tension better. 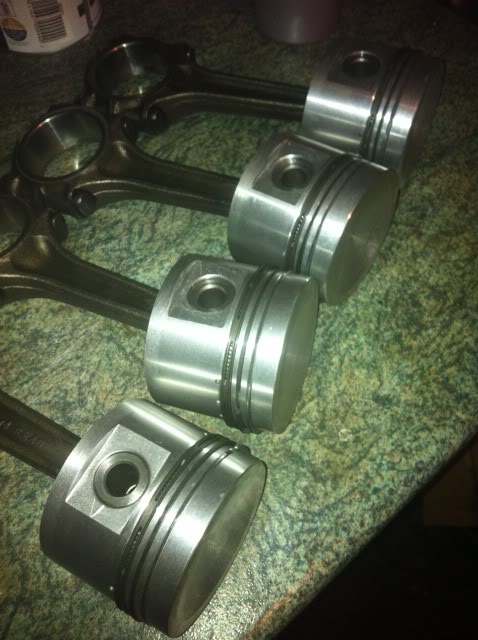 I turned the block on its side so I can get access to slide in the pistons. The bores have been cleaned again to make sure all the machine oil used when the rebore was done is removed. and then I used fresh oil down the bores. 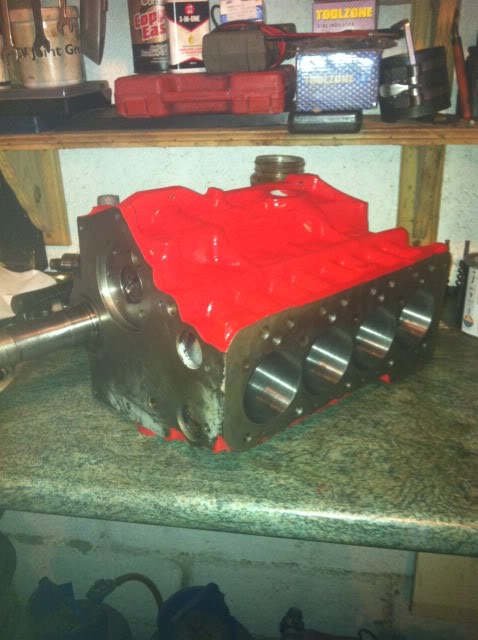 I use the ring compressor to squash the rings after I had spaced the gaps evenly around the piston. I also used plenty of oil on the rings and down the bores. 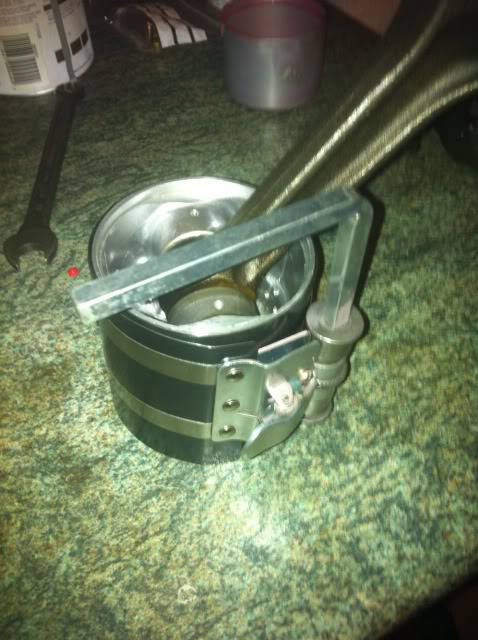 The big end caps and rods were marked with a spot punch when I removed them. this way I know which one goes where and dont get things mixed up. 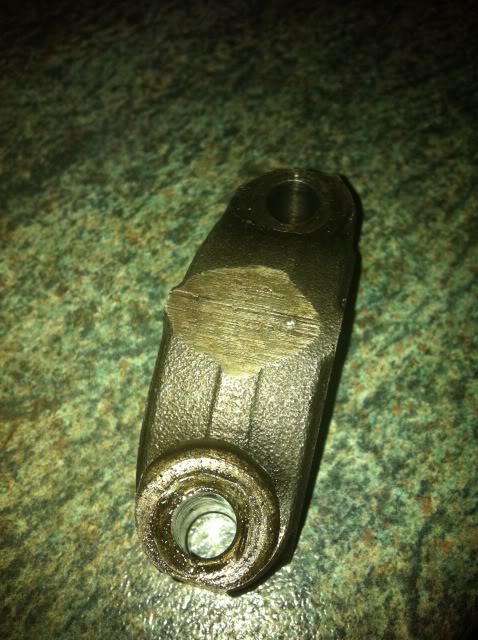 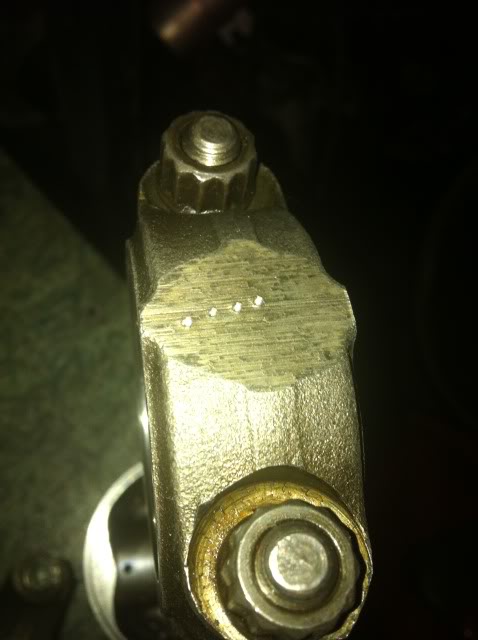 The bearings get the same treatment as the mains ones.. 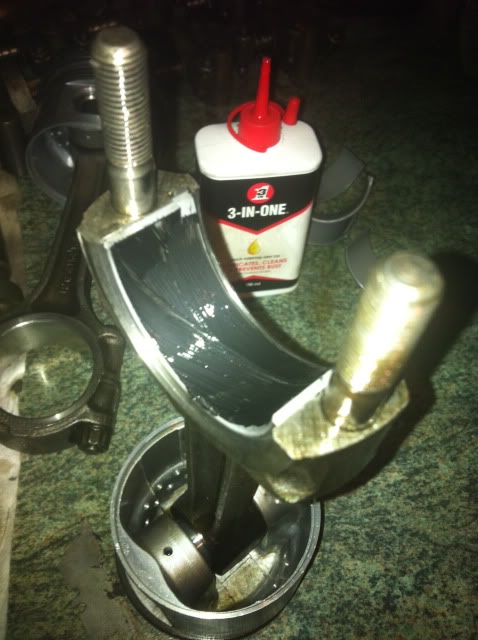 Im starting with number one so it goes in this end of the block..number one is always at the watwer pump end. 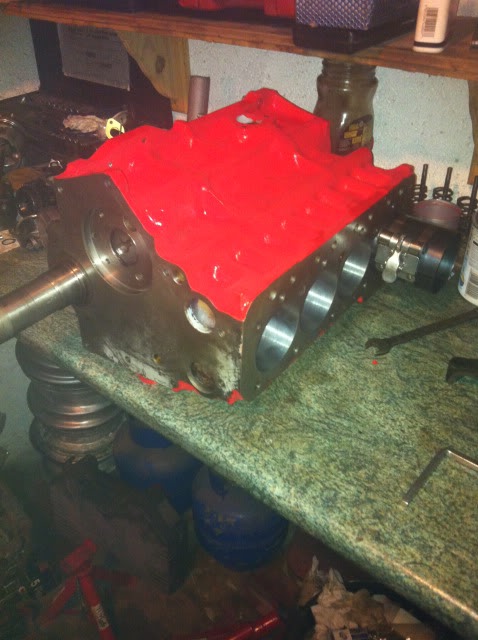 When sliding the piston down the bore make sure you line the big ends up with the crank journel...the rods are shaped to fit. 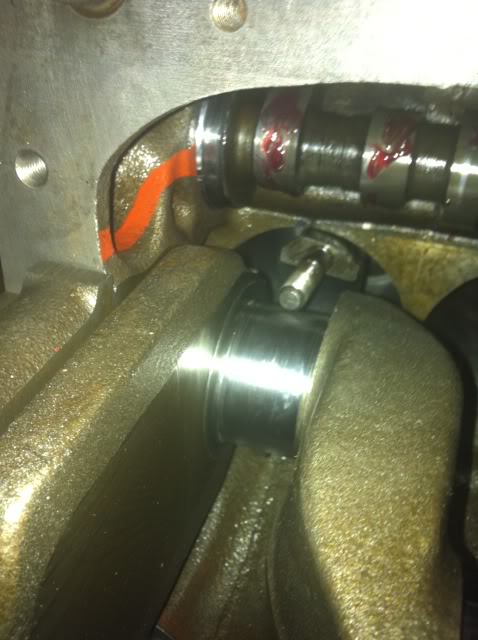 Then once you are sure everything is lined up gently tap the top of the piston with the handle of a hammer or similar untill it pops into the block...If it stops or wont go in DONT be tempted to whack it harder. This is where you will break the rings.

The caps get more Graphogen and on they go. 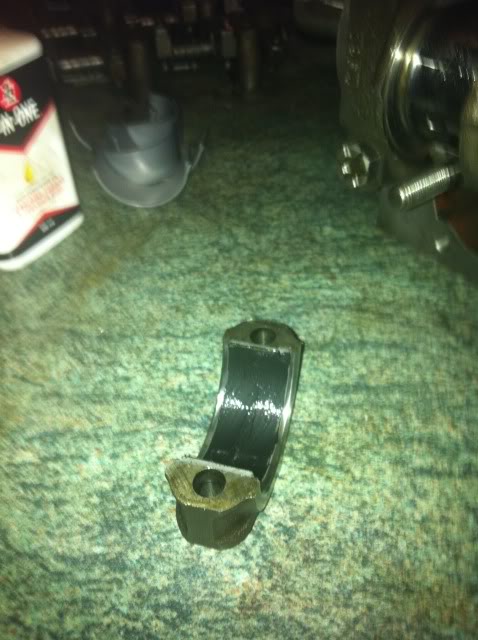 Once you have them on but not fully torqued up, turn the crank, If its tight then you have the cap on the wrong way around. Swap it round and try again. You will feel the difference.. 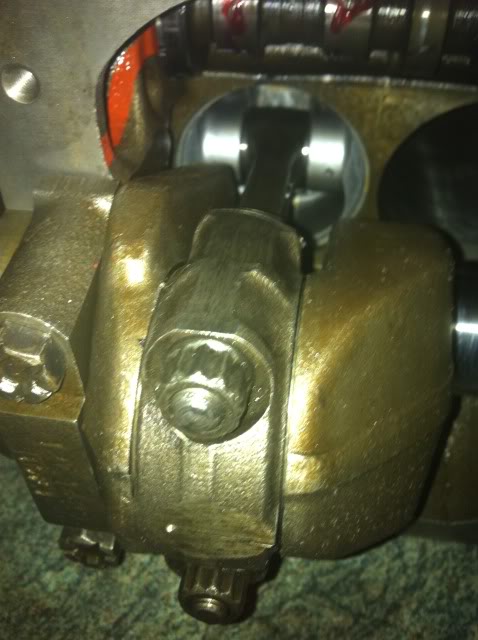 So thats number 0ne fitted...the other three are just the same..