As some of you might know I had a story about the restoration of my XR7-G going on the other forum, but for several reasons I decided to stop posting there after the new ownership of the forum took place. My plan was to continue the story here and link to the other forum so readers could get the first part of the restoration there. Well, I changed my mind and decided to move all my posts to this forum to make it easier for readers to get the full story. Before I go on with the copy and paste I have decided to start with a short summary on how this unique car came into my hands.

My car started its life February 27 in Dearborn, Michigan. I assume it was built into a XR7G-Hertz car soon after that. According to the Marti report it was released from Mercury on April 10 as the 43rd Hertz car built and went to Van Nuys Motors INC in California. Since the car is a Hertz-car it is obvious that it served as a rental car for its first part of its life. After that I know little about the car until the mid seventies. Fast moving forward, I noticed the car being for sale on Craigslist, and it was also discussed on MC.net for being a true Hertz car or not since it had a 302 engine. to make a long story short, I called the owner, who had very little knowledge about the car, and after some negotiation we had a deal. It turned out that the car had been in his family since mid seventies and that his dad had restored the car back then and also replaced the 390 with the 302.

Here is the car at the port in Long Beach, CA, ready to be shipped to Norway 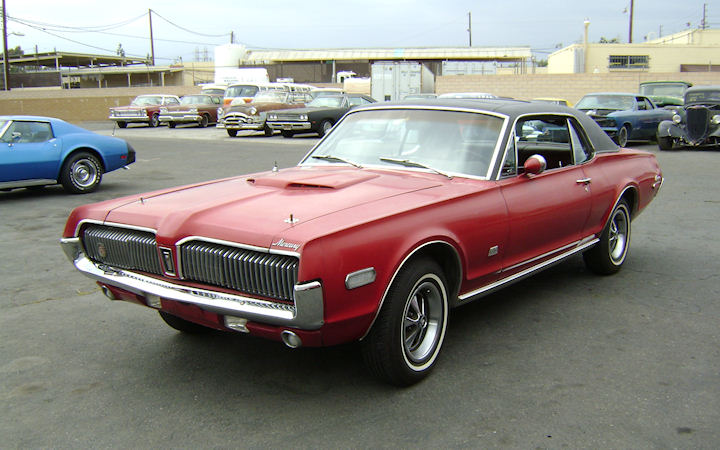 After some time the Cougar finally arrived Oslo, Norway. After paying the taxes I was ready to drive my red dream the 40 miles home. It started right up and home I went. 40 miles does not seem to be a long drive, but with this car and all the problems it had it turned out to be a long trip.
Back home I started to look over the car and found that it would need new brakes and everything in the front end replaced to pass the inspection to get its Norwegian plates. I also made a few small fixes to it, like making the sun roof operational again this first summer. Then I drove the car and had a lot of fun with it. My plan was to keep it like this for a few years before I started to tear it apart for a full restoration

Here is a couple of pictures of the car from the first summer and fall I had it . The first picture is from when I fixed the sunroof. My green sun roof 68 XR7 had to donate some parts. 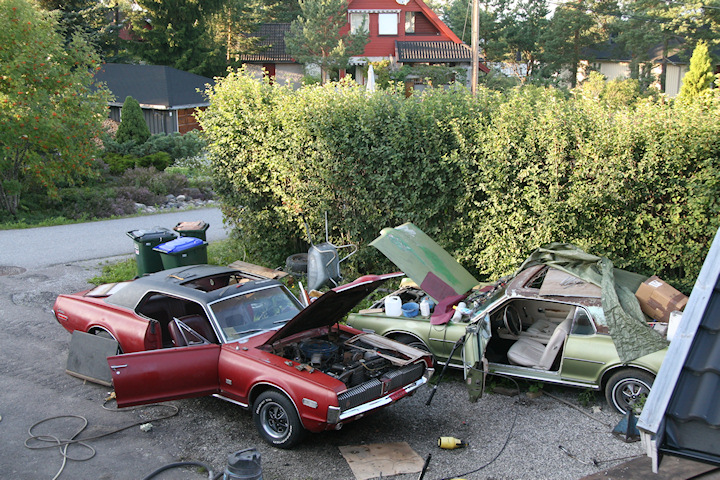 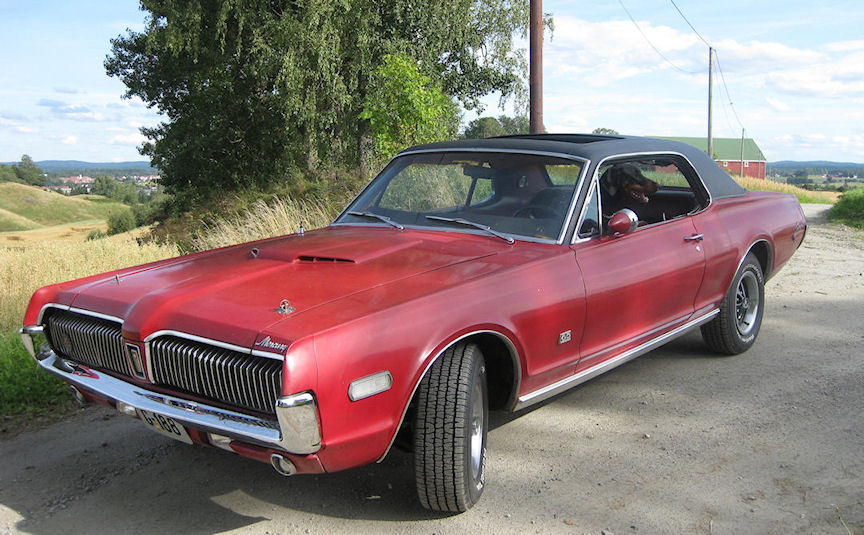 From now on it's a lot of copy and paste

Most of you have read this before so I guess you can just jump to the new post when I get time for those. I will just copy my own posts as I feel I have no right to copy what other people wrote in my tread. So here we go:


When I started to work on the car in November 2009 the intention was to have the engine and transmission replaced. So I got the 302 pulled, just to realize that I just could not put the 390 into a dirty bad looking engine compartment like this. 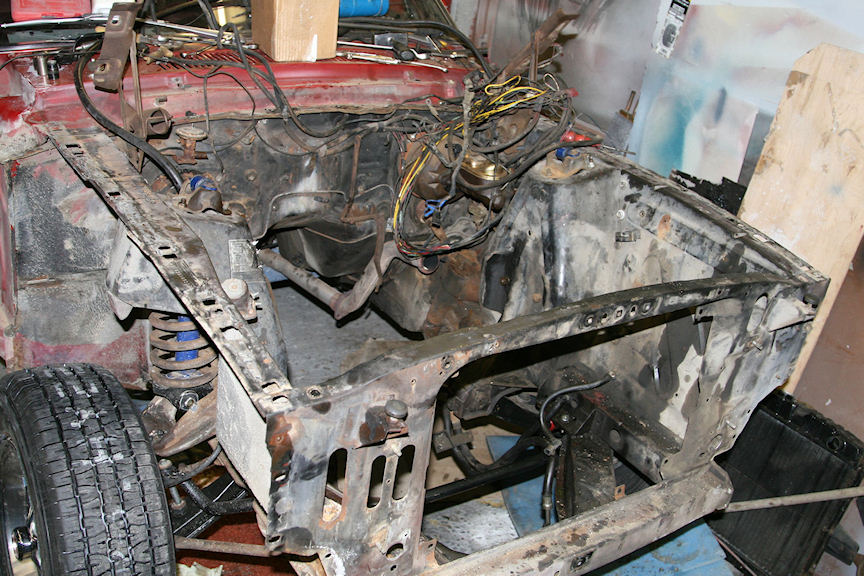 I also found some rust under the battery shelf and while I had the engine out I wanted to reinforce the shock towers to avoid them to crack. The steering gear was also worn out, so I decided it needed to be replaced at the same time. Then I discovered that the wiring system was junk too. OK, I still had a long winter ahead, so I figured I could just as well pull everything in front of the doors apart and have the engine bay done properly. So after a few more visits in the garage the front looked like this: 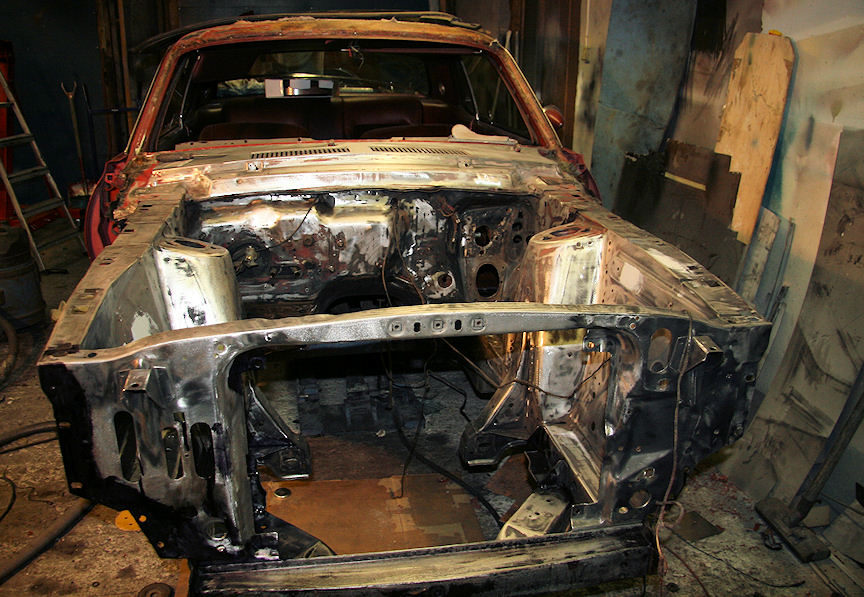 Of course I discovered that the front fenders had a few older dents that I wanted to straighten out, and the front valance was also no good and needed to be replaced. I could just as well take care of those problem now. Just because I was eager to see what the vinyl on the roof was hiding (there was a few bubbles) and how the car would look like without it I ripped it off. Suddenly the car looked like this. 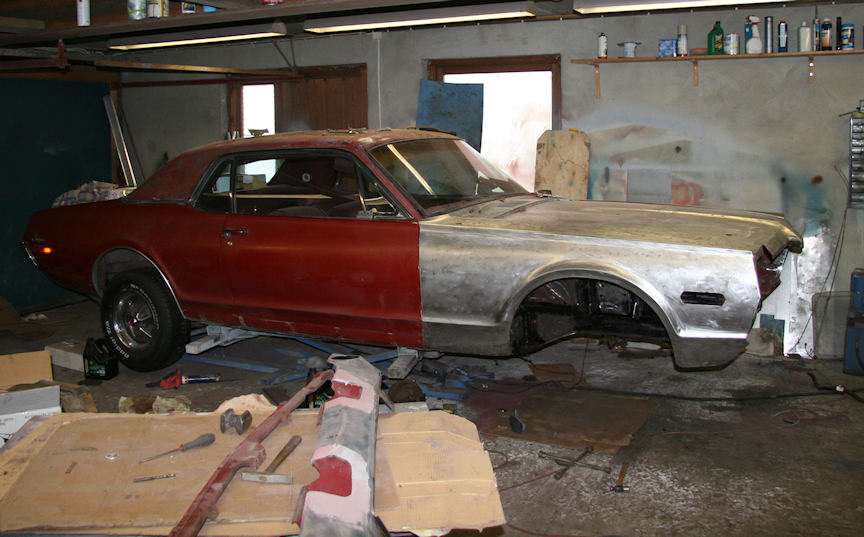 Removing the old vinyl top revealed some common rust problems in the lower parts and corners of the rear window frame. Otherwise the roof was rock solid :icon16: A couple of nights later that had been taken care off. 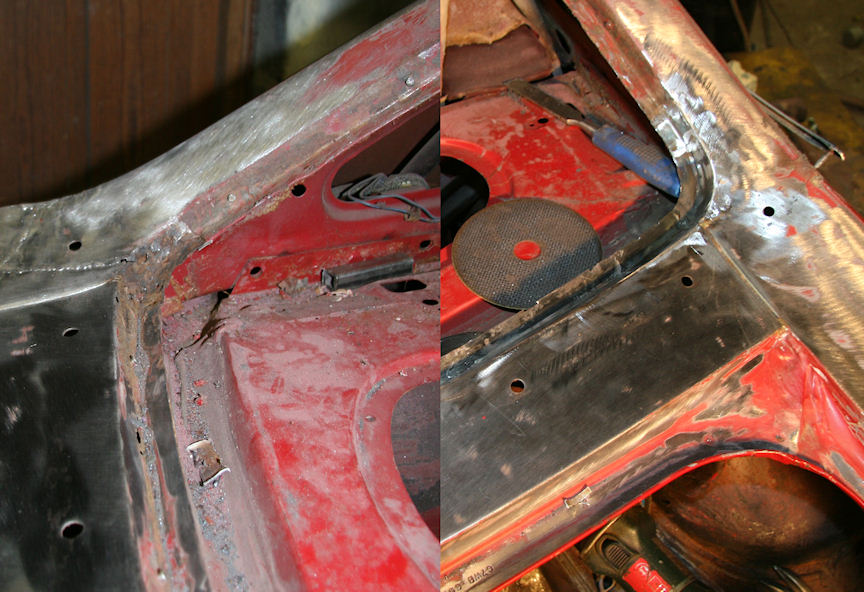 Then I started to look at the trunk floor. I had never been able to examine the work that had been done after the collision damage because the trunk mat was glued to the floor. I decided to pull it as well, just to realize that it covered less desirable work. First of all, everything under the trunk mat was covered with a sprayed on asphalt like goop that was really hard to get off. Then I found heavy layers of bondo and then 2 layers of trunk floor over the frame rails. Of course there was also some rust there. When they replaced the rear floor they did not cut away all the old floor and just had the now floor put on the top of some of the old. That is an interesting way to do it 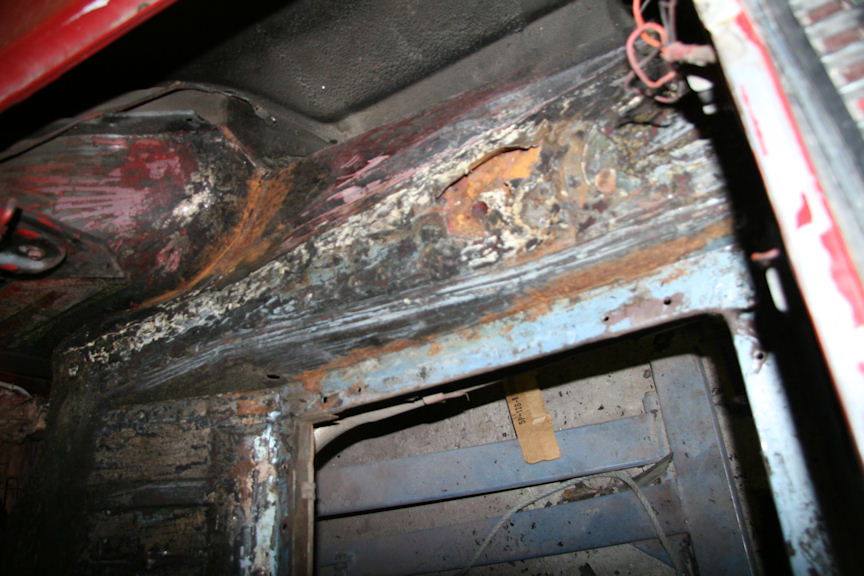 The trunk lid that was put on the car after it had been hit in the rear was rusty as well. Now I need a good one, so if you have a rust free 68 Trunk lid please send me a PM 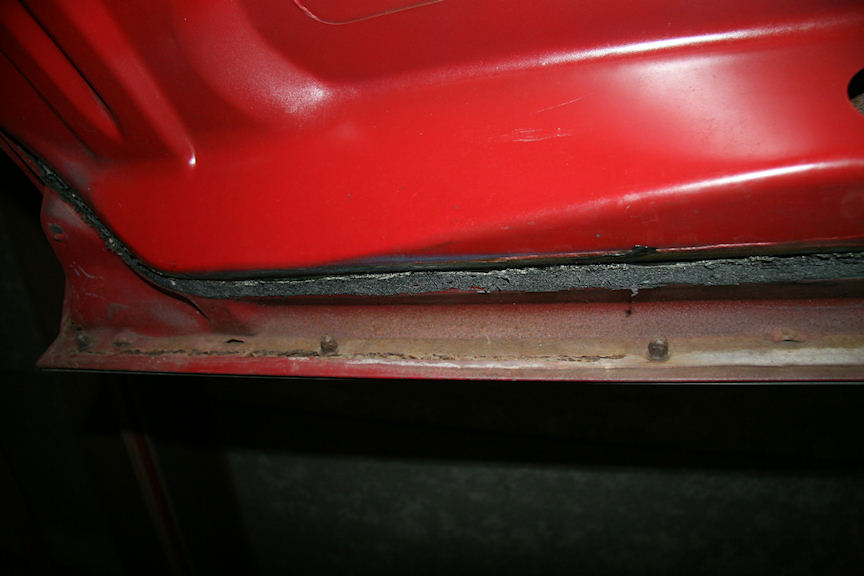 At this stage I decided I could just as well strip the whole car down to bare metal to see which other secrets the red paint was hiding. I can tell you that it was really exciting to take off all the bondo, which in places was almost 1 inch thick. The conclusion I have made is that bondo must be incredible cheap in the US, while a hammer to knock out the dents must be extremely expensive. I also found some patches welded on the top of the rust in the front and rear of the rear wheel openings. But otherwise it is a solid car.

Here you can see how it looked. Notice the front patch that covers the groove: 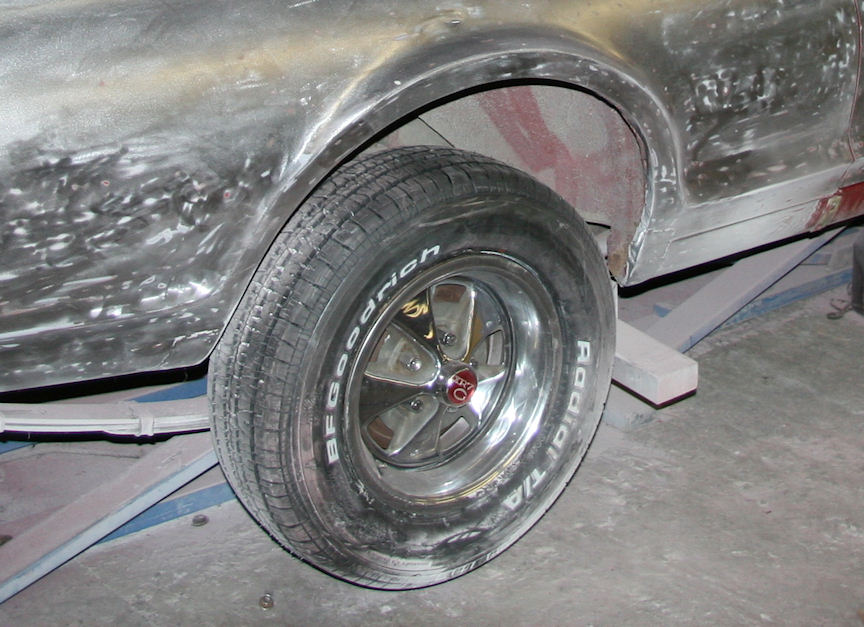 And here is how I like to do it 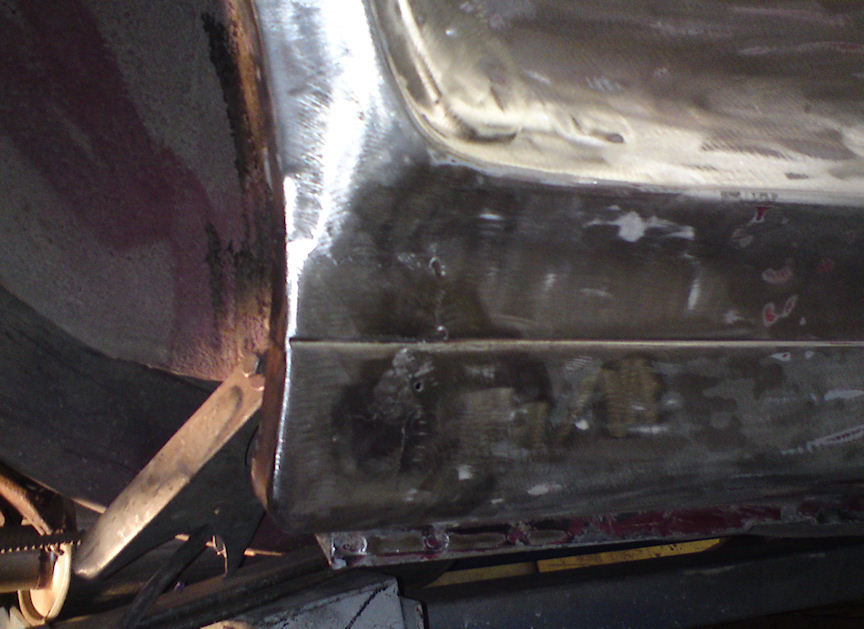 This is how the car looks today, April 17. 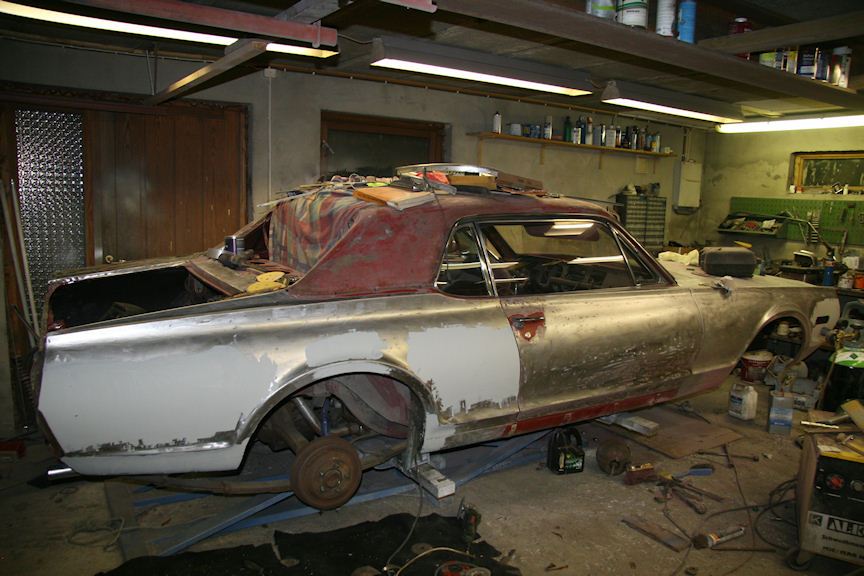 I did not do any major changes to the shock towers as I am not going to race this car. From the factory the heavy braces are just spot welded to the towers, and the cracks always starts out of these spot welds because of structural stress. This small modification will not really make the front suspension any stronger or add much to how the car drives, it will just prevent the shock tower from cracking. I will also put on the export brace instead of the cheap factory braces, which I think will add enough stability of the towers to make me pleased.

Another thing the sharp eyed reader will notice is that I've also done the Shelby drop. 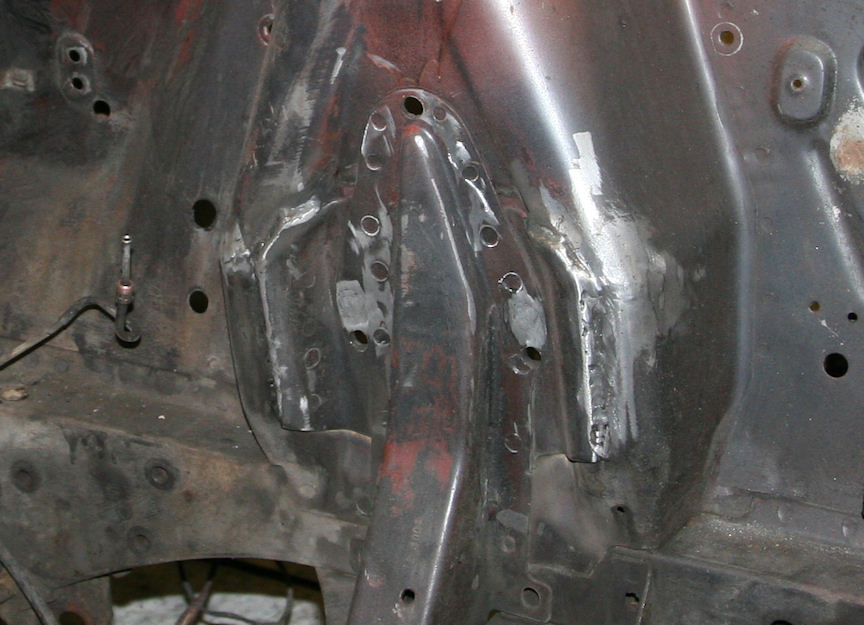 The left hand quarter panel did not line up good at all. It turned out that when it had been replaced years ago it was not done right, as they had the outer skin welded outside of the old skin at the door post and under the quarter window. I also found that the quarter panel was located about 1/4 inch too high on the car. As a result I decided to cut the panel off, cut out the old original panels where there was to layers and relocate the newer panel. There was also some common rust in the front of the wheel opening that I had to take care of.

When I started working on the car I was hoping to have it done before spring, now I hope to have the car painted in June and finished in July, but I am not sure if that will happen.

I am kind of picky when it comes to the bodywork, so even if I make plans for when I want to have the car done I take the time needed to become happy with the result in the end.
Anything else would be a waste of time and money.

Anyways, here are a couple of new pictures showing some finished areas. 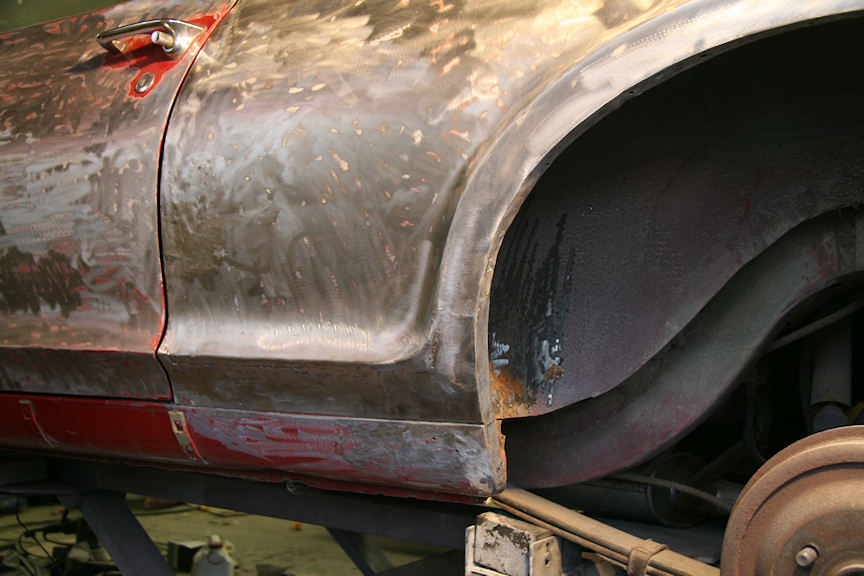 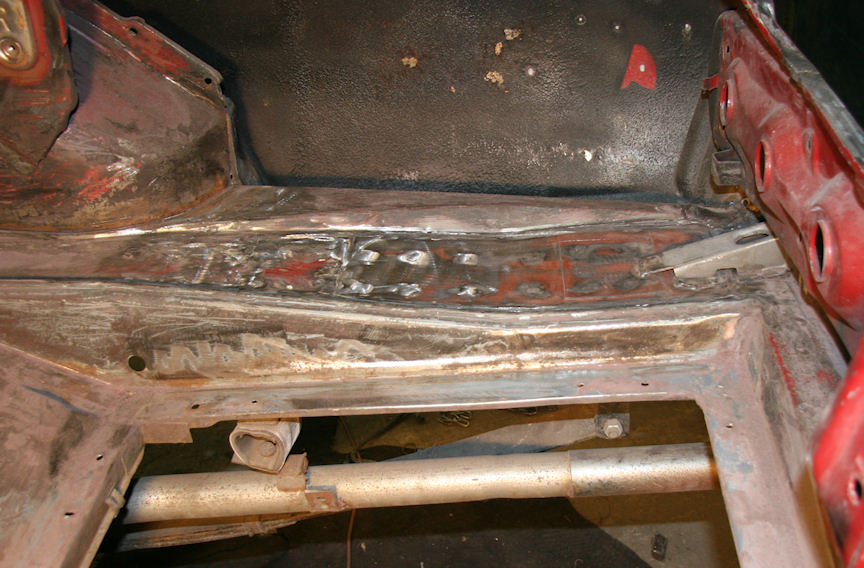 Since I found some common floor rust and a bent rear frame, I decided to do a total restoration job on the car. That means taking the car totally apart, have the underside sandblasted and to do all the detail work on the underside as well. 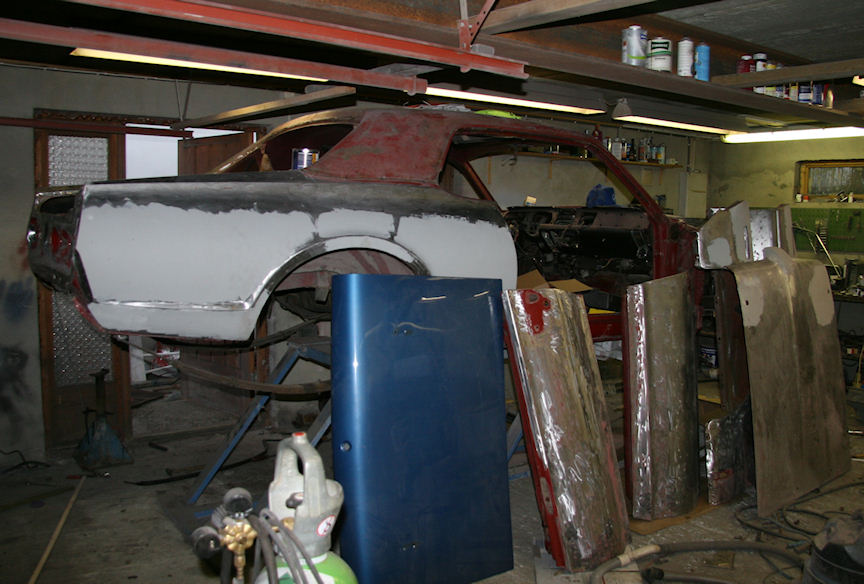 Here are some pictures showing some of the misery. RH front floor was rusty as a result of a leaking AC and most of the floor under the back seat was bad too, most likely caused by mice living in the back seat.
But the worst part was not the rust but a bent frame frame rail and lousy previous work in the trunk after the rear hit. Instead of trying to straighten out the bad floor sheet metal I decided to cut away everything that was bent and deformed and to make new parts . This also gave me the access to the frame rail from above so it could be straightened out properly. 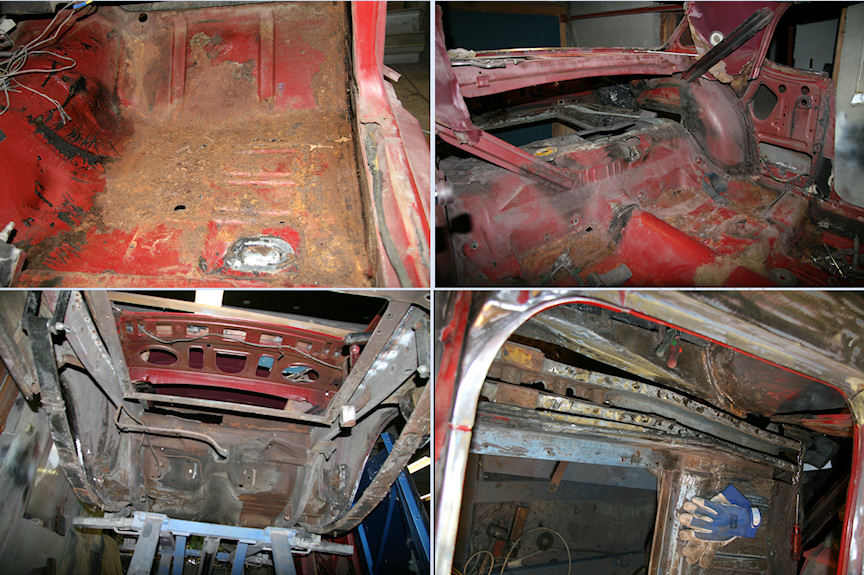 I bought the floor pan from WCCC and it is made out of nice and heavy sheet metal compared to some of the other floor pans you find out there. It still needed some massage in my hydraulic press to improve the profiles to look more like the original floor pan.

After I was done welding I had the body sandblasted. 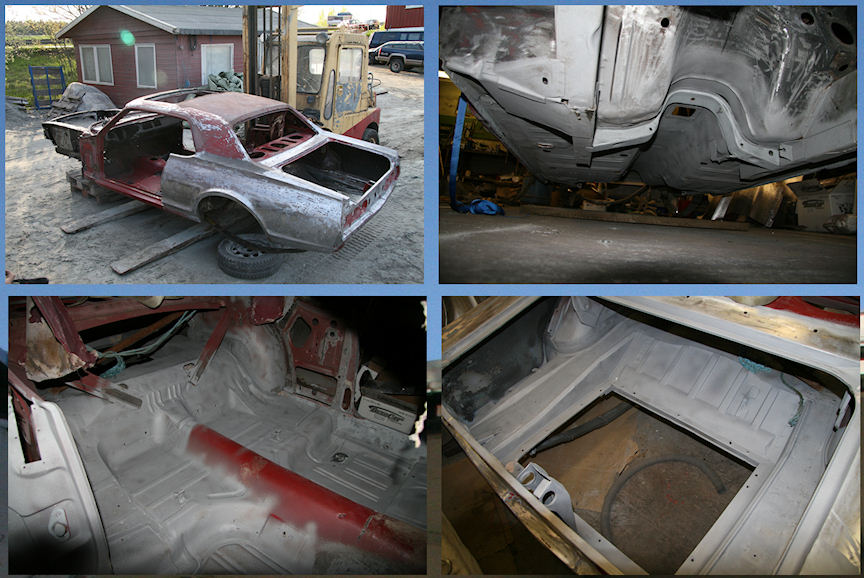